Just to be clear, the Redmi Note 8 Pro specifications appeared in what seems to be an official spec sheet. We cannot really confirm that this is legit, but it's quite possible.

Redmi had already confirmed some bits and pieces regarding this phone. The device will be fueled by the Helio G90T, both Redmi and MediaTek confirmed that much. Redmi also confirmed that the phone will feature a 64-megapixel camera on the back.

That 64-megapixel sensor will be its main camera, and it comes from Samsung, as this is an ISOCELL sensor.

That being said, this spec sheet shared much more info regarding the phone's camera, along with other info that you may be interested in. Let's see what the phone will have to offer, shall we.

Its specifications are nothing to scoff at

According to this, the Redmi Note 8 Pro will feature a 6.53-inch fullHD+ (2340 x 1080) display. The phone will come in two RAM and storage variants. The 6GB RAM variant will include 64GB of storage, while an 8GB RAM model will ship with 128GB of storage.

The phone's display will be protected by Corning's Gorilla Glass, the Gorilla Glass 5, to be exact. The phone will ship in Ice Jade, Fritillaria White, and Electro-optic Ash color variants.

Android 9 Pie will come pre-installed on the phone, along with MIUI 10. The phone will offer storage expansion via a microSD card.

In addition to Samsung's 64-megapixel camera (f/1.7 aperture) on the back, the phone will include three additional cameras. An 8-megapixel ultrawide camera will be available, in addition to a 2-megapixel "macro video camera" with a focal length of 2cm. The last unit will be a 2-megapixel depth sensor.

A 4,500mAh battery will be included in the package, and will support 18W fast charging. An NFC chip will be included, and the same goes for IR blaster. According to this spec sheet, a 3.5mm headphone jack will also be a part of the Redmi Note 8 Pro's design. 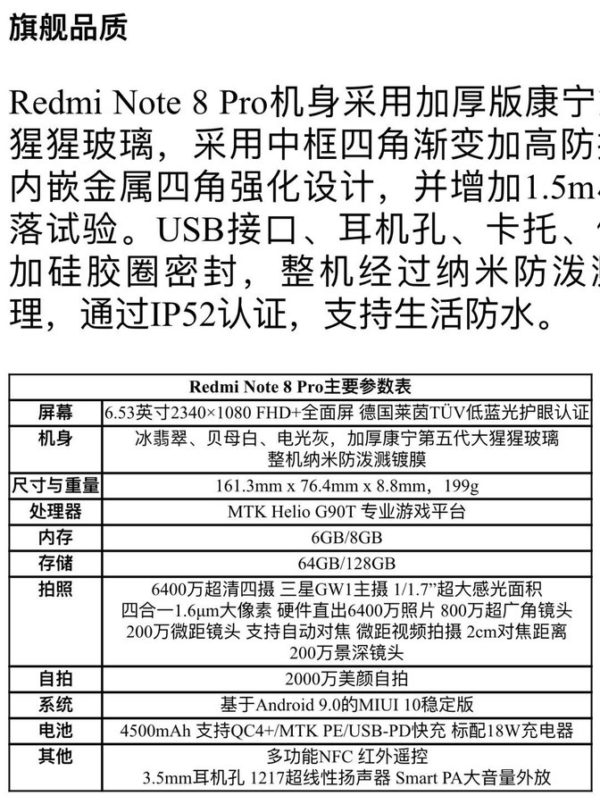