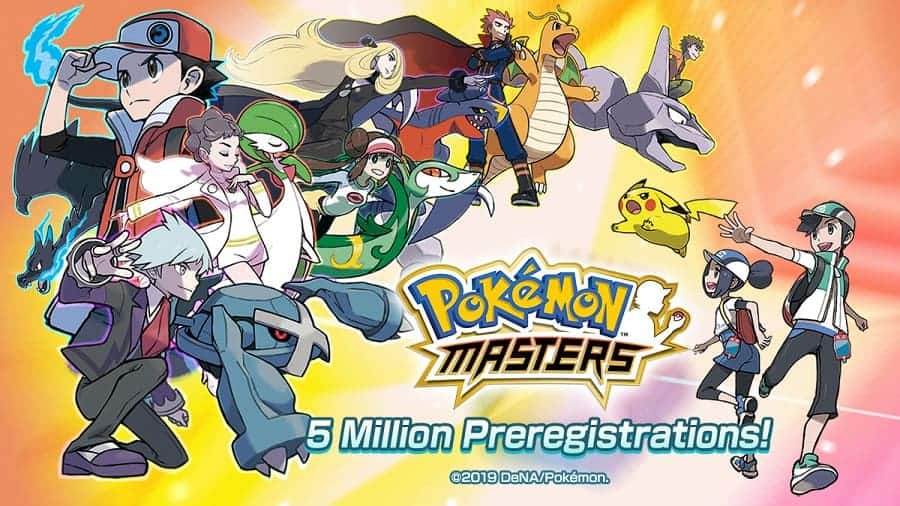 Pokémon Masters is the newest Pokémon game coming to mobile devices and it's already reached an astounding 5 million pre-registrations. The game, which is already available in beta form in a few countries, will be getting a global release sometime before the end of the Summer. Also worth noting is that the pre-registrations are across both Android and iOS devices worldwide, not just one platform or region.

That being said, 5 million pre-registrations is no small accomplishment. The game can already be played by gamers in Singapore, and Canada. Which means most or all pre-registration users are those who have yet to play the game. You can however easily get around the region-locking of the beta by using a VPN while you play, which is a simple enough process.

Pokémon Masters is being developed by DeNA in cooperation with The Pokémon Company. It will feature the telltale battling combat that has come to be known from almost all Pokémon games on any platform. To mix things up, the game will also feature a strategic approach to those battles. Players will need to form pairs of three trainers, each with their own Pokémon, and battle against others teams of three.

These "sync pars" as they're called can be switched up at any time, which is part of the strategy, as some trainers and their corresponding Pokémon will be better suited for certain battles. Of course you may not know which ones are a better fit until you go through the battle at least once.

The good news is that Pokémon Masters puts players through a healthy yet not too long tutorial, which teaches you the finer points of the game so to speak. In addition to the tutorial in the actual game, The Pokémon Company has put out a series of videos which goes over many of the game's mechanics to help teach players all or most of the important aspects.

These videos can be extremely helpful in learning about the game, more so than the in-game tutorial as they explain things a little better and are more in depth. The sync pairs in particular can require a little more practice if you want to "master" the best combinations.

Pokémon Masters features an original story with a unique hero and main character, and takes place on the island of Pasio. This location is where the Masters Tournament is being held and as the name suggests you're trying to become the champion trainer of the Masters Tournament. Becoming the master trainer, if you will.

Like other Pokémon games on mobile devices, Pokémon Masters will be a free to start game. This means it will be free to install and free to play, but there will be micro transactions within the game that players can buy optionally. You will not however, be required to purchase anything to progress. All of the game's story content will be playable without IAPs being needed, so you should get the full experience once the game actually launches for everyone, which hopefully isn't too far off.