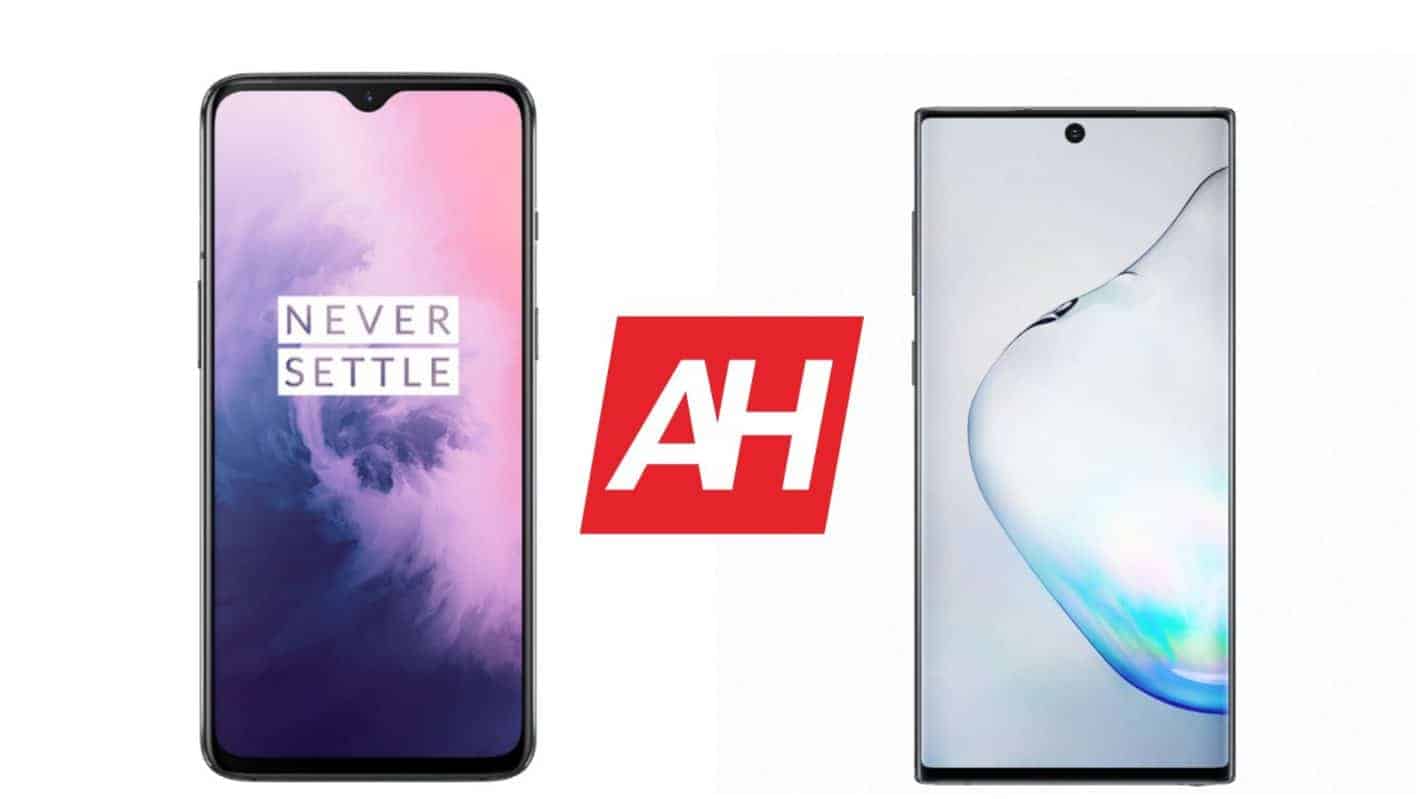 The OnePlus 7 and Galaxy Note 10 are also considered to be flagship phones, even though they're inferior to their siblings. Both of these phones have plenty to offer, though, as they offer most features their bigger brothers do.

The OnePlus 7 and Galaxy Note 10 resemble the other two phones quite a bit, sport the same processors as them, and so on. In this article, we'll compare the two phones across a number of categories, as per usual. We'll try to figure out which phone is better at what, and hopefully help you reach a decision as to which one to buy. 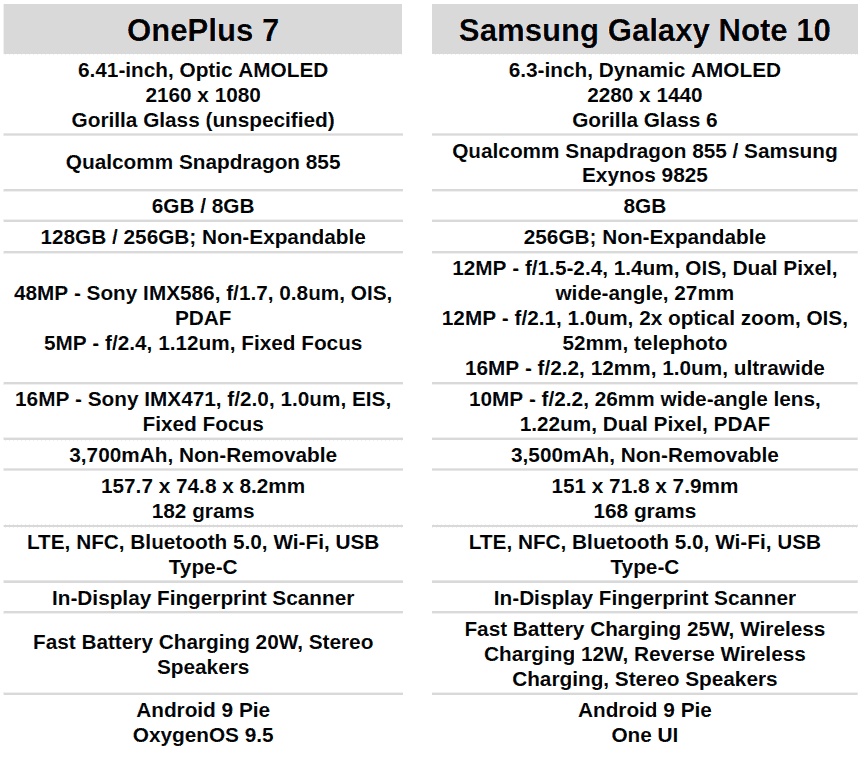 These two phones are both made out of metal and glass, but they do feel different in-hand. The OnePlus 7 offers more pronounced curves than the Galaxy Note 10, while it also has rounded corners. The Galaxy Note 10, on the other hand, has rather sharp corners, which is not something we're used to seeing.

The OnePlus 7 includes a waterdrop display notch, while Samsung opted for a display camera hole on the Galaxy Note 10. Both of those display obstructions are minimal, but they're there, and it's up to you to decide which bothers you less. The Galaxy Note 10 does have a thinner "chin" below the display, but not by much.

Both of these phones are really nice looking, but it's up to you to decide which you like more. They are quite different, despite similar materials being used. We cannot really pick a winner here, they both offer nice designs and we don't really feel one is better than the other. 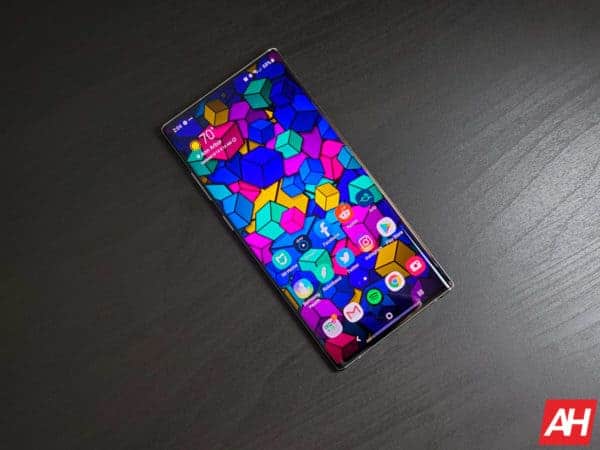 Unlike their siblings, both of these devices feature fullHD+ displays. In fact, both of those displays are OLED panels. The two phones do ship with different display aspect ratios, and differently-sized displays.

Both of these displays are really nice-looking, though we'll give an edge to the Galaxy Note 10. If you don't mind a curved display, the Galaxy Note 10's panel looks a bit better in comparison. It offers punchier colors, and it also offers HDR10+ output. The OnePlus 7's display is not far behind, though, at all. Both displays offer great contrast, and those OLED deep blacks. Viewing angles are also great on both.

In the flash storage department, the OnePlus 7 vs Samsung Galaxy Note 10 comparison is evenly-matched. Both the OnePlus 7 and Samsung Galaxy Note 10 comes with UFS 3.0 storage. That is rather important to note, as not only does it make the two phones really fast, but it also makes them future proof, kind of. Think of UFS 3.0 as a really powerful SSD drive for smartphones.

Both phones have plenty of RAM, and in collaboration with their software offerings, they're both really fast. OnePlus' phones have been known to last longer when it comes to smooth performance due to software, but we cannot say whether that will be the case here. The Galaxy Note 10 certainly does have more bloat installed, but we'll see what will happen in a couple of months or a year.

At this very moment, both phones are extremely responsive. They can handle whatever you throw at them, and we did not notice any sort of lag.

So, what about battery life? Well, neither of these two devices is bad in that segment, but the OnePlus 7 does have an advantage. The OnePlus 7's 3,700mAh battery did offer more longevity than the Galaxy Note 10's 3,500mAh unit. The Galaxy Note 10's smaller display did not help in that regard, as the OnePlus 7 managed to offer 20-25-percent better (approximately) battery performance.

That is not surprising, though, as OnePlus' devices are known for really good battery performance. That's not to say that the Galaxy Note 10 is bad in this regard, at all. Besides, your usage will differ from what we've seen, so your mileage will vary.

We will give a slight edge to the OnePlus 7 in this category, mainly due to battery endurance. If you do need wireless charging, though, the Galaxy Note 10 is your only option. 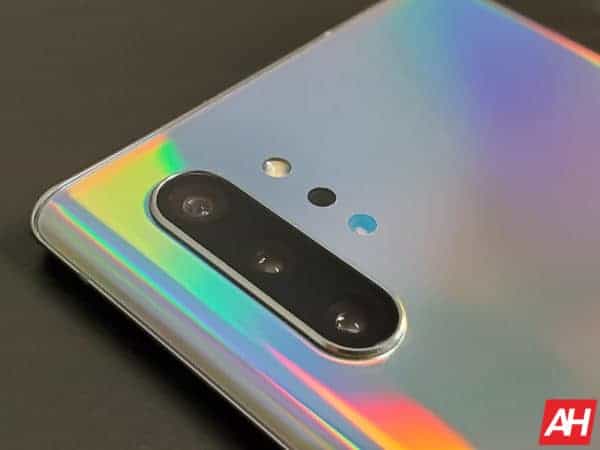 The OnePlus 7 comes with two cameras on the back, a main 48-megapixel one, and a 5-megapixel depth sensor. The device does not offer a telephoto camera, or an ultrawide-angle camera.

Both camera setups are extremely capable in regular lighting conditions. During the day, both camera setups perform admirably. You'll be able to get great colors, dynamic range, white balance, and generally well-balanced pictures.

This is yet another category in which the Galaxy Note 10 has an advantage. Neither of these two phones offer a 3.5mm headphone jack, which is a minus for both. The Galaxy Note 10 does offer better audio in all other aspects, pretty much.

The two phones perform well when you plug in your headphones as well, or use Bluetooth headphones. But once again, it seems like the Galaxy Note 10's output is a tad bit better. The difference is not large, by any margin, so truth be said, you won't be disappointed with either of the two devices. 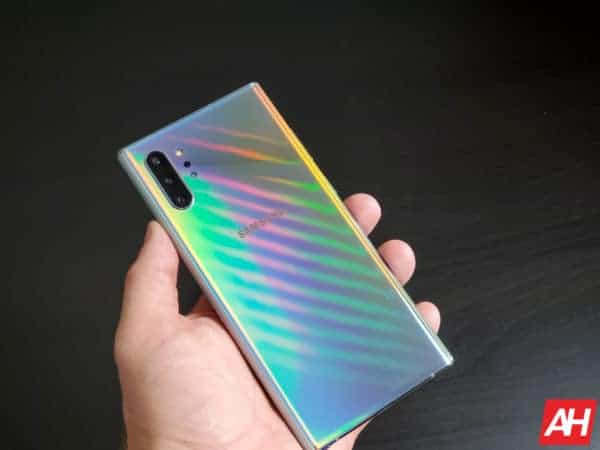 It's hard to do the Galaxy Note 10 comparison without mentioning the S Pen. We did not have anything to compare it to, as the OnePlus 7 does not offer a stylus. S Pen is a great tool, and if you need it, it's there, and the Galaxy Note series is your only choice. The S Pen on the Galaxy Note 10 is the best one Samsung released to date.

Having said that, both of these phones are really compelling. The OnePlus 7 vs Samsung Galaxy Note 10 comparison will have a winner in the end, but both put up a great fight. The Galaxy Note 10 is better at most things, but not by much. The OnePlus 7 is almost on par with the Galaxy Note 10, and it costs considerably less. Your personal preference and budget will play a huge role in a decision on which one to buy, but they're both great phones.