According to some new info, OnePlus may actually release Android 10 with OxygenOS 10 at the same time as Google. Well, at least if a screenshot provided on Reddit is to be believed.

At that point, the user wanted to be sure, as the answer was kind of vague. We say this because OnePlus Support rep used the word “wish”. Following that question, he got a clear answer: “Yes we are planning to launch on the same date of the version 10 launch”.

This seems to confirm that the two newest smartphones in OnePlus’ arsenal will get Android 10 sooner than expected. We're taking about the OnePlus 7 and OnePlus 7 Pro here, of course. The two phones were expected to get the update in either November or December, but they may get it at the beginning of September.

September 3 launch not confirmed yet

Google still did not reveal the launch date for Android 10, but that date has leaked prior to this. Folks from Google Support more or less confirmed the info by answering user questions. Two separate reps did that, in fact, so September 3 seems to be the day. On top of that, OnePlus Support now did the same.

Just to be clear, we’re talking about Android 10-based OxygenOS here, of course. Based on the company’s version numbers thus far, OxygenOS 10 will ship with Android 10.

OnePlus was one of Google’s Android 10 Beta partners, so the company had access to everything needed to speed up the development of OxygenOS 10. That is why we believe this may actually be possible.

OnePlus will be praised for its efforts if it manages to push out Android 10-based OxygenOS on September 3, that’s for sure. Not all OnePlus 7 and OnePlus 7 Pro devices will get the update on that day, though. The company will first push it out to a limited number of users to make sure no bugs get spotted. After a couple of days, the rest of the users will get the update.

This is the company’s usual practice when it comes to releasing updates, so you’re probably already used to it.

It is also worth noting that this would not be the first time a company managed to pull this off. Essential was able to release a new version of Android at the same time as Google, Android 9 Pie last year.

Truth be said, Essential ran stock Android, more or less. OnePlus’ OxygenOS is heavily-based on stock Android, but there are a number of features that are added, and need to be adapted for Android 10.

In any case, we’ll see what will happen on September 3. This info does look legitimate, though, so OnePlus may surprise us all. 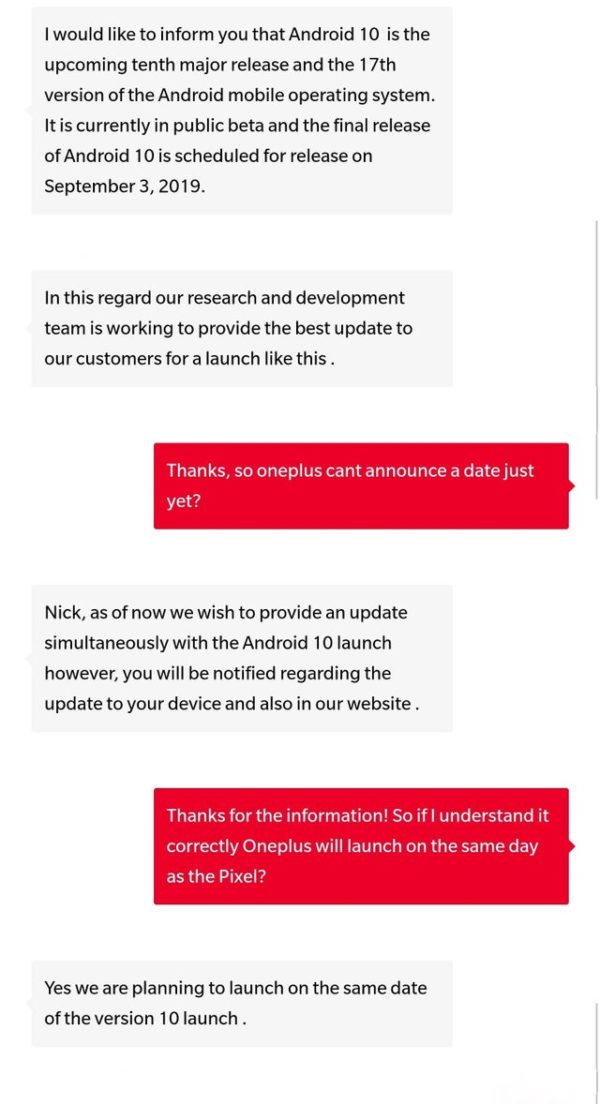