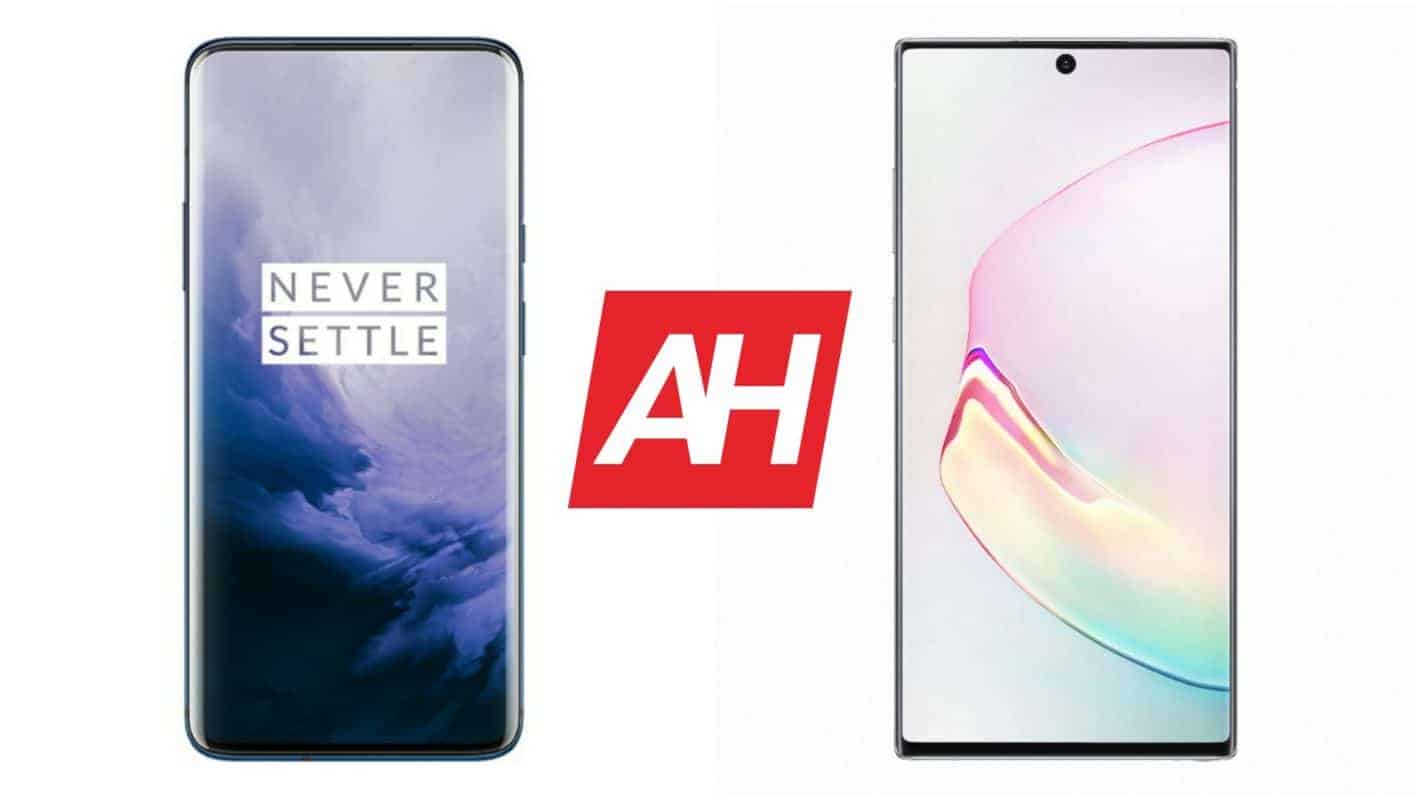 The OnePlus 7 Pro vs Samsung Galaxy Note 10+ comparison time has come. These are the two of the best smartphones OnePlus and Samsung have to offer at the moment, respectively. The OnePlus 7 and Galaxy Note 10 are also considered to be flagship-grade phones, but are a step below their siblings.

That being said, many of you are probably trying to decide which of the two phones to get. One of our editors recently published an article claiming that the Galaxy Note 10 series is not that expensive when you consider various factors. We recommend you go and read that before you make a purchase. 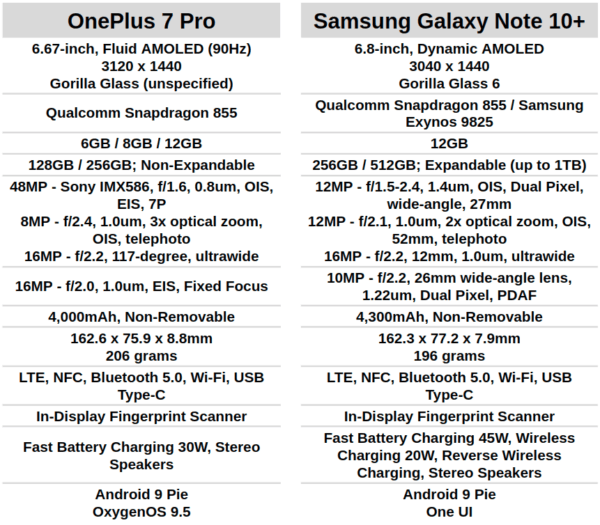 The OnePlus 7 Pro and the Samsung Galaxy Note 10+ are both really nice-looking phones. These two phones are probably amongst the best-looking devices in the market at the moment. Both devices are made out of metal and glass, and yet they’re quite different.

Both phones feature curved displays, and both include vertically-aligned cameras on the back. The position of those cameras is different, though, and the Galaxy Note 10+ includes one mroe camera than the OnePlus 7 Pro.

The OnePlus 7 Pro includes a pop-up camera, which made it possible for OnePlus to ditch both a notch and a display hole. The Galaxy Note 10+ does include a display hole, which is not large, but it’s there.

The OnePlus 7 Pro does have a slightly thicker “chin” below the display, and rear cameras protrude on both devices. The OnePlus 7 Pro is a bit narrower than the Galaxy Note 10+, but it’s a bit thicker. The two phones are about the same in terms of height, though.

This is all a matter of personal preference. The OnePlus 7 Pro may look a bit more appealing to the eye, due to the lack of a display hole and more rounded edges, but the Galaxy Note 10+ has its advantages. You do get a small display hole, but you don’t have to deal with a pop-up camera. On top of that, the Galaxy Note 10+ has a thinner “chin”. As we said, it’s all a matter of personal preference, both are great-looking phones.

This is a really difficult category to compare when it comes to these two phones. Samsung is actually the manufacturer behind both of these displays, and you’d expect the company to keep the very best for itself. Well, Samsung did, kind of.

Both phones include large OLED displays. The OnePlus 7 Pro comes with a 6.67-inch QHD+ Fluid AMOLED panel, which is curved. The Galaxy Note 10+’s display is also curved, and we’re looking at a 6.8-inch QHD+ Dynamic AMOLED panel in its case.

Both panels support HDR 10+ content, and truth be said, both look amazing in real life. These two displays are extremely close in terms of output quality. You’ll get amazing contrast, punchy colors, deep blacks, and really sharp content on both displays.

You really can’t go wrong with either one of these two displays. The OnePlus 7 Pro’s offers higher refresh rate and is not obstructed by a display hole, while the Galaxy Note 10+’s offer better protection and may look a hair more impressive in real life. 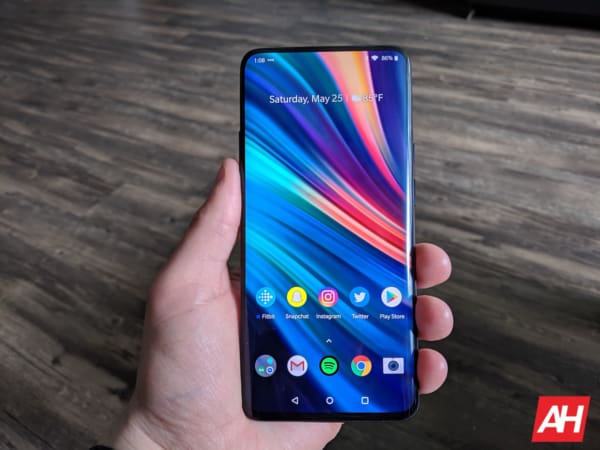 These are both flagship-grade smartphones, so you’d expect flagship-grade performance, right? Well, yeah, and that’s exactly what you’ll get here. Both phones can handle pretty much anything you throw at them, with ease.

The difference in performance is not large at all, at least not at the moment. OnePlus’ devices are usually at the very top of the food chain in the performance department, and Samsung’s flagships have been known to slow down over time, faster than OnePlus’.

The Galaxy Note 10+ is brand new, and chances are it will stay an excellent performer for quite some time. Still, using the OnePlus 7 Pro and its OxygenOS skin, in collaboration with a 90Hz display, feels a bit more fluid than using the Galaxy Note 10+ and its skin. The two phones are extremely close in this segment, though.

We did not really get a chance to fully test the Galaxy Note 10+’s battery life just yet, but the OnePlus 7 Pro is great in this regard. Even if you flip the switch and enable 90Hz refresh rate, the OnePlus 7 Pro will be able to provide over 6, 7 hours of screen-on-time for most users (for some even 8+), with ease.

Truth be said, the same is expected out of the Galaxy Note 10+, as the phone comes with a slightly larger battery. As far as Samsung’s flagship series smartphones are concerned, the Galaxy Note series was always at the very top in terms of battery endurance.

Initial usage seems to suggest that the OnePlus 7 Pro is a bit ahead in terms of sheer endurance, though more tests are needed. On the other hand, the Galaxy Note 10+ offers more in the charging department. 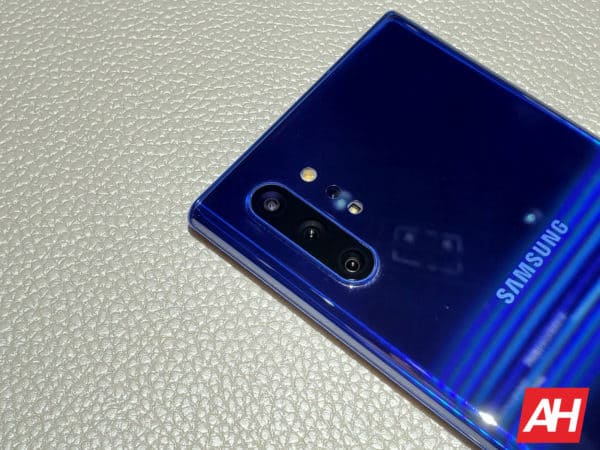 The OnePlus 7 Pro was not exactly praised for its camera performance at first, but that changed. The company rolled out quite a few updates since the phone became available, and the device is capable of producing some great pictures and video. The difference is huge, in fact.

The OnePlus 7 Pro’s low light shots improved a ton, with its dedicated dark mode. The phone also doesn’t have those blur issues when taking macro shots. All in all, it’s a far better experience than it was at first.

Still, after using the Galaxy Note 10+’s camera for a bit, we have to say, the Galaxy Note 10+ is the winner. Our full review will drop really soon, as we’re testing the phone at the moment, but we can say it right now, it’s a great camera smartphone.

The Galaxy Note 10+ does not bring that many improvements in terms of camera hardware. Samsung kept things rather similar to the Galaxy S10+, with the addition of a ToF camera on the back. The end result is much improved, in both daylight, and low light.

You’ll be glad to know that both the OnePlus 7 Pro and Samsung Galaxy Note 10+ come with stereo speakers. In fact, those stereo speakers are quite good on both smartphones, there’s not much to complain about. Sound is sharp and loud, with very little distortion.

There’s the flip side, though, or bad news, if you will. A 3.5mm headphone jack is not included on either of these two smartphones. That is a real shame for those of you who still use wired headphones.

Sound via wired headphones (especially good ones), and Bluetooth headphones, is really good, though. Both devices come with Dolby Atmos sound support, and are capable of producing really good audio.

Samsung’s speakers are tuned by AKG, while the phone can reproduce 32-bit/384kHz audio. Both devices deliver great sound via headphones, but the Galaxy Note 10+ does have an upper hand in this department. Small advantage, but still. 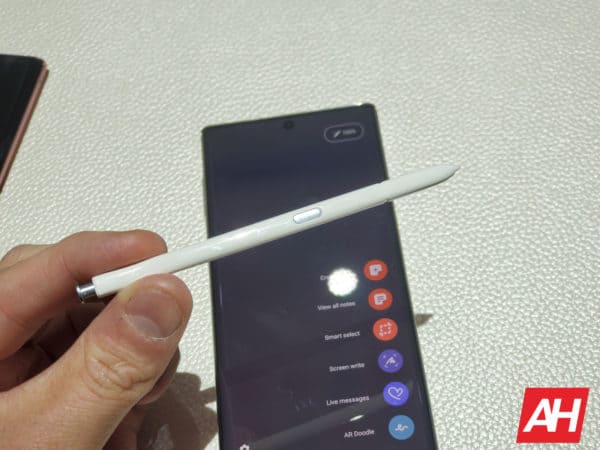 It would be a shame not to mention the Galaxy Note 10+’s stylus separately here. If you do need an S Pen, it’s there, if not, that’s fine as well. Though, truth be said, the Galaxy S10+ may be a better choice if you’re not planning to use the S Pen at all. Mainly because it will allow you to save up some cash.

The Galaxy Note 10+’s S Pen now has its own set of gesture navigation features. Those air gestures don’t really work flawlessly, but they’re there if you want to use them. Previous features are also included here, and the S Pen is a great tool for those of you who need it. 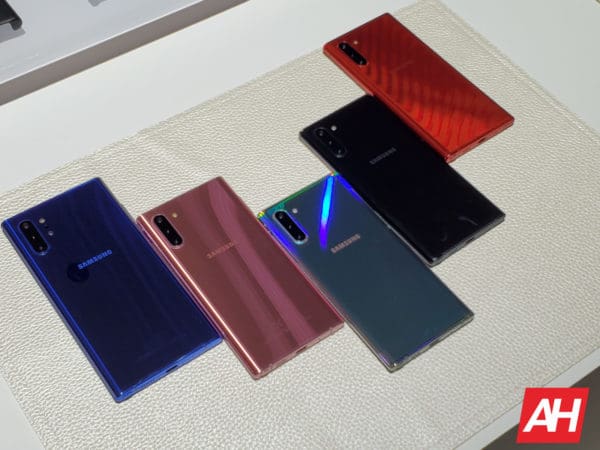 This brings our OnePlus 7 Pro vs Samsung Galaxy Note 10+ comparison to an end. Both of these are great smartphones, it’s hard to deny that. They are considerably different smartphones, though.

All things considered, the Galaxy Note 10+ does have an upper hand, but it all depends on what you need. The OnePlus 7 Pro offers a cleaner software experience, with less bloat. It also offer a cleaner design, at least that’s what most people will think.

The Galaxy Note 10+, on the other hand, is packed with features. The phone has great cameras, and it offers more in the audio department. There’s always the S Pen, if you need it, it’s there, and it’s great.

The OnePlus 7 Pro vs Samsung Galaxy Note 10+ comparison was a tough one to do, even though the two phones are not that similar. It’s up to you to decide which one fits your usage habits better.