Skip to content
Advertisement
Trusted By Millions
Independent, Expert Android News You Can Trust, Since 2010
Publishing More Android Than Anyone Else
15
Today
15
This Week
460
This Month
460
This Year
118369
All Time
Advertisement If we’ve learned anything from smartphones, it’s that 3 years is a long time to wait to get an upgrade. That’s exactly the situation that many VR enthusiasts have been finding themselves in, given that the HTC Vive and the Oculus Rift launched in the Spring of 2016. While the Oculus Rift S and the Valve Index aren’t considered full “second-generation” VR head-mounted displays (HMDs), they are a significant upgrade in many ways from the HMDs launched 3 years ago.

It makes sense then, that the monthly Steam Hardware Survey is showing an effective trade-off with the Oculus Rift and the HTC Vive in favor of the two latest HMDs. Given that folks who have had an HTC Vive or Oculus Rift for some time were likely early adopters, it comes as little surprise to see these same folks upgrading to the next-level headsets in each category.

The July results came out a few days ago, but featured a mystery “Unknown” category that all of a sudden made up 9.86 of VR HMDs that responders owned. The assumption was that this was the two newest HMDs on the market, the Valve Index and the Oculus Rift S, but the breakdown wasn’t possible to assume. Valve has updated the survey with the two properly named categories, and now the actual numbers can be seen. 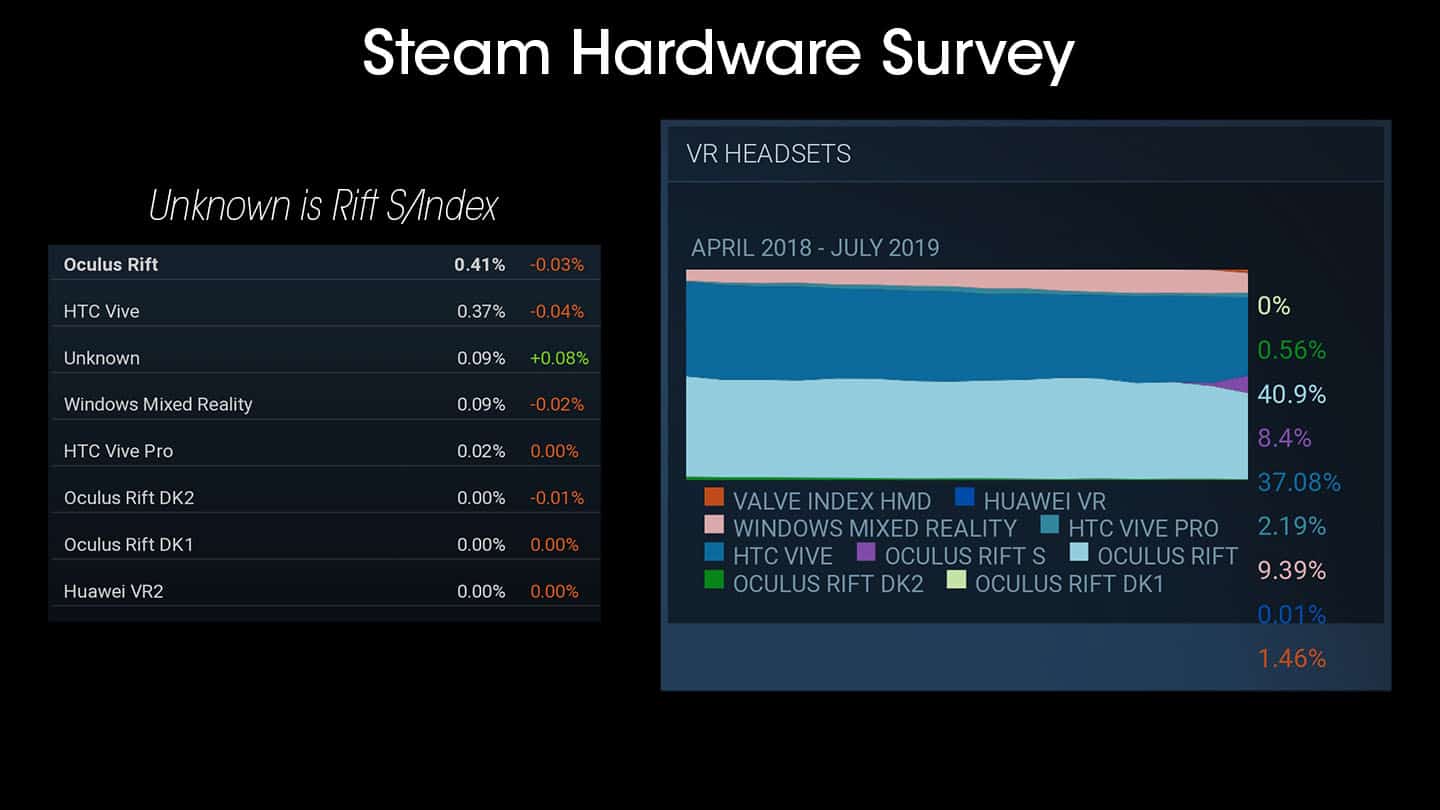 The Oculus Rift S takes home the cake with 8.4 percent of total owned VR headsets, making an impressive dent in the number of total HMDs out there in just 2 short months since it’s been officially sold. The Valve Index only takes up 1.46% of the VR HMD market, but it’s really only been readily available since July 24th. Even the HTC Vive Pro saw an increase, from 1.66% in June to 2.19% in July, showing that these “generation 1.5” headsets are certainly an interest to consumers looking for a better experience.

Going right along with another survey that was conducted for VR developers, the market seems to be slowly shifting to Oculus headsets (or quickly if you count the Oculus Quest). In total, Oculus now holds the majority of the PC VR market with about 50% of all VR HMDs on Steam, and likely holds an even higher number than this given that every single Oculus user most certainly does not use SteamVR in addition to the Oculus Store interface.

To note, the monthly Steam Hardware Survey is a survey sent out to random Steam users, in which manual user responses are tallied each month and the results displayed in several different charts. This means that the data present in these charts is certainly not going to be 100% accurate when compared to the actual user base, but it’s a good representation of what to expect given that users who respond aren’t likely to fib about what hardware they’re running.