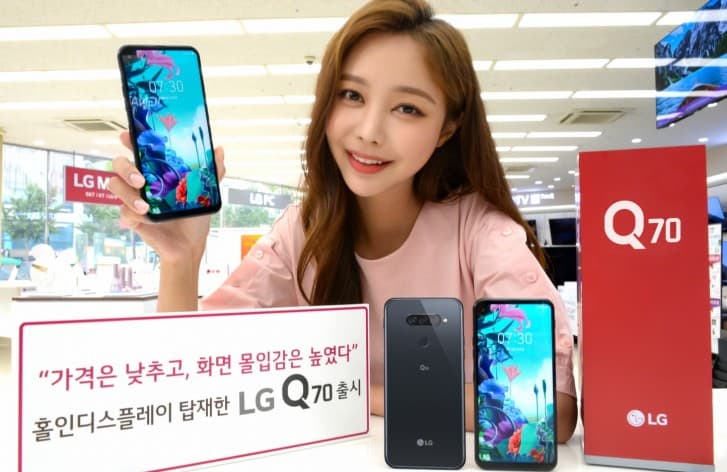 LG is the latest company to jump the pinhole bandwagon. The South Korean giant announced the midranger LG Q70 in a press release. The phone will go on sale in the company’s home country on September 6.

LG calls the screen cutout ‘hole-in-display’ and this, coupled with its rear cameras and price, is what LG believes will pull young consumers towards the phone. The LG Q70 sports a 6.4-inches FHD+ display with presumably a very high screen to body ratio as the bezels are also minimum. The display hole is home to a 16-megapixels selfie snapper.

Since this is a mid-tier device, it unsurprisingly gets the Snapdragon 675 Mobile Platform. The phone has 4GB of RAM and 64GB of internal memory which is expandable up to 2TB with a MicroSD card. The handset will ship with Android 9 Pie and it will be available in the color Mirror Black.

On the back, there are three cameras. The primary unit is 32-megapixels with an f/1.8  aperture and it is joined by a 13-megapixels ultra-wide camera with a 120-degree angle of view and a 5-megapixels depth sensor.

Keeping the lights on is a massive 4,000mAh battery, which is the reason why the phone is a bit on the heavy side. LG has thankfully not cut corners on some important features, which means the phone gets Quick Charge 3.0. This will allow the users to fill up the battery pretty quickly.

The phone is also IP68 certified. Other than that, the handset also supports LG Pay, the company’s digital wallet that’s only available on a few of its phones. Other notable features include DTS:X 3D Stereo Sound and 32-bit Quad DAC audio. Like the LG Q60, which was announced during the MWC, this one also has a physical Google Assistant key. This button can help users launch the assistant easily. LG also claims that the phone was put through rigorous testing to qualify for military standards for durability.

The Phone Might Make An International Debut During IFA

In Korea, the LG Q70 is priced at 548,900 won, which is around $450. While there is no word regarding an international release yet, we may see the phone at IFA.

It goes without saying that the Q70 is a midranger out and out. However, what it has going for it are the trendy hole punch and the triple camera array. As you may probably know, camera hardware alone doesn’t guarantee good shots. However given that the phone has the Snapdragon 675, it can count on the Spectra 250L image signal processor for good shots. As for the overall performance, it should be pretty decent.

As some recent reports have pointed out, demand for high-end smartphones has slowed down. Consumers are instead going for lower-cost phones with a decent battery life and camera smarts. This is clearly the reason why companies like Samsung, Google, and even Apple are introducing relatively lower-cost alternatives to their high-end phones.

LG’s smartphone sales haven’t been doing so well lately. Great budget phones with decent cameras can help the company bounce back and regain some of the lost market share.