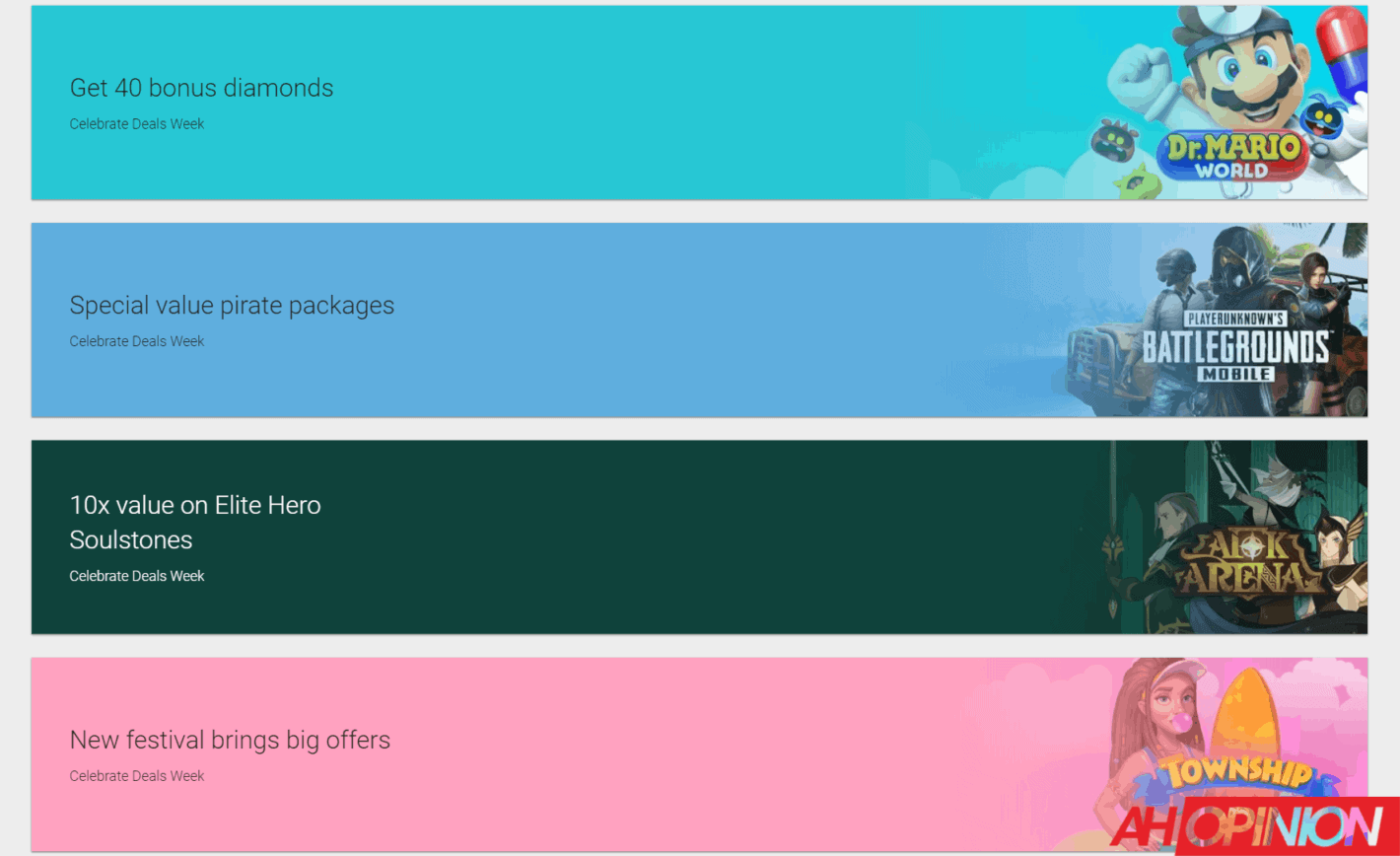 If you've happened to open up the Play Store app on your phone or navigate to the Google Play website at all within the last 24 hours you may have seen Google's highlighted celebration of Deals Week. As the name suggests, this entire week you'll be able to snag all kinds of stuff at lower costs thanks to a collection of sales on everything from books to in-game micro transactions.

Deals week is a great way to save some cash on things you may have been holding off on getting because you couldn't justify the extra cost. It's also promoting micro transactions within games. This could be considered both good and bad, it all depends on your stance on in-game purchases as a whole.

On the one hand, Google is doing a good thing here by discounting micro transactions within games. This means you can spend less money and get something that's useful inside of the games you might play, if you choose to spend that money. Deals Week also discounts plenty of other types of entertainment.

One quick look and you'll find deals on movies and audiobooks, with a curated collection of movies that will cost you less than $5 to buy. The issue, even with some of the micro transactions being less expensive than they normally would be is that the micro transactions are being promoted in the first place.

This is a bad thing because many mobile games are packed with aggressive in-game purchases that can make you feel like you need to buy those special items if you want to continue having fun. Not all games are like this and not everyone will feel the same way about a particular game that others feel has too many micro transactions included.

Dr. Mario World, for example, has been hailed by some as another display of Nintendo making a cash grab at mobile gamers. With energy refresh systems in place that curb your play time unless you buy premium currency that allows you to continue, the game does sort of punish those who enjoy the game so much that they want to continue playing for longer sessions, and the only way around this is if you're able to complete the stage you're playing.

When you start up a stage in the game, it takes away one of your hearts, but you get it back if you beat that stage. So, if you're really good at puzzles and are able to go through each stage flawlessly, you can basically play as long as you like. If you're not so good at the puzzles this game throws at you however, you lose one heart for each stage loss and then have to wait for them to regenerate.

To some this is viewed as a way for Nintendo to force people into buying the game's premium currency called diamonds.

Personally, I don't feel this way, as I play through as many stages as I can before my hearts run out and then happily put it down, feeling fulfilled until the next time I have 10 to 30 minutes to kill and want to knock out some more of the game. Not everyone is fine with this, and that's completely understandable, though perhaps a bit misdirected.

There are worse games on Google Play and mobile platforms in general where it feels much more pay to win, and Dr. Mario World or any of Nintendo's mobile offerings are hardly the worst offenders.

With things like Deals Week in place, micro transactions in games are indirectly being glorified. This is probably not Google's intent. It's more than likely just trying to cut mobile gamers a break and save them some money on things they may have wanted to spend money on, but that isn't going to stop micro transactions from probably gaining some popularity when the store in which you download your mobile games is putting them front and center at steep discounts.

Google carefully curates these types of lists, so it's probably picking a combination of newer featured games and top popular titles in which to discount in-game purchases. In total there are 36 games in the "Deals Week" list that are having some kind of special deal or sale. Dr. Mario is the first one you see when you tap on the Deals Week page, but you'll also find promoted banners for PUBG MOBILE, AFK Arena, Township, Raid: Shadow Legends, and Star Trek Fleet Command.

Most of the games are likely just discounting specific in-game purchases, but some are also giving stuff away completely in addition to holding sales. Dr. Mario World is another example here. To celebrate Deals Week Google Play is advertising that you can pick up 40 bonus diamonds within the game. That's not diamonds that you get on top of a bundle of them that you buy. You're just given 40 bonus diamonds for free the moment you log in, and that's great.

So while the promotion of micro transactions, on sale or not, can be both bad and good, it's important not to let the good stuff drown out like the complete freebies that you don't have to spend any money to acquire. It's also important to remember that micro transactions themselves aren't really the enemy here, it's the companies that design games in such a way that force you to spend the money on them in an aggressive nature.

Many of the games which have micro transactions are free, so the developers have to make money some how as it costs money to make those games. Having any micro transactions at all is not so much the issue. The bigger problem game studios that take advantage of the knowledge that people will spend money on micro transactions if they make the game fun enough, and exploit that to gouge players.

All that said, Deals Week still does have some pretty good sales and offers included, so if there are any games you play that are part of it where you've considered spending any real money on in-game items, now would be the time do so as you won't be spending as much. Unless you end up spending more because it's all on sale and the deals are "too good to pass up."