Skip to content
Advertisement
Trusted By Millions
Independent, Expert Android News You Can Trust, Since 2010
Publishing More Android Than Anyone Else
32
Today
132
This Week
818
This Month
6532
This Year
116502
All Time
Advertisement Research firm Strategy Analytics has released its findings on the growth of the global smartwatch industry for Q2 2019 and its good news. Unlike the smartphone industry, which has seemingly hit a plateau, the smartwatch segment continues to grow at an impressive pace.

The top three spots continued to be occupied by Apple, Samsung, and Fitbit, with the South Korean giant soaring to the second position. Apple remained the uncrowned leader, maintaining a clear lead over its rivals.

The Cupertino giant accounted for 46 percent of the total global shipments with 5.7 million sales in the second quarter of the year. Compared to Q2 2018’s sales of 2018, this is a 50-percent growth. The impressive sales helped the company increase its market share by 2-percent, further consolidating its position.

Samsung managed to more than double its sales from 0.9 million in the year-ago quarter to 2 million in the second quarter of the current year. This helped it nudge aside Fitbit, which seems to be a struggling a little. Samsung’s market share in the smartwatch industry now stands at 16-percent, an increase of five percent from Q2 2018. Strategy Analytics believes that recent releases, such as the Galaxy Watch Active 2, will help the company hold onto this spot for the rest of the year.

Fitbit, which was once a global leader in the wearables market, saw its shipments decline during the April-June period. From 1.3 million sales in Q2 2018, sales were down to 1.2 million in the second quarter of the year, reducing the company’s market share from 15 percent in the year-ago quarter to 10-percent. The Californian company is facing stiff completion from Apple when it comes to the high-end market, and its lower-priced models are struggling because of competing products from Garmin, Fossil, Xiaomi, and Samsung.

As consumers become more health-conscious, the demand for wearables is only expected to grow. Fitness bands help user track activities such as steps taken in a day, calories torched, and heart rate. With the addition of features such as LTE connectivity, NFC, and GPS, wearables have now become an important standalone accessory, prompting many new players to enter the market.

Thus, the competition has increased, and to drive sales, vendors will have to offer a differentiated experience. Apple seems to be doing well because of its focus on innovation and tight integration of software and hardware, while Samsung’s offering seems to be the best option for those looking for a smartwatch compatible with Android handsets.

Samsung smartwatches run Tizen OS, an open-source operating system based on Linux. The South Korean giant has abandoned Google’s Wear OS as the company has failed to work on its shortcomings, which is probably the reason why the market share of Android smartwatches has shrunk. Similarly, Fitbit watches also run the company’s proprietary OS, which is said to be cleaner, faster, and more powerful than the Wear OS.

Of course, that doesn’t mean that you should write off Wear OS as it does have its own strong points such as the seamless integration with Google Assistant and the freedom to install third-party apps. Perhaps if Google makes the software faster, refined, and more power-efficient, it might become relevant again. 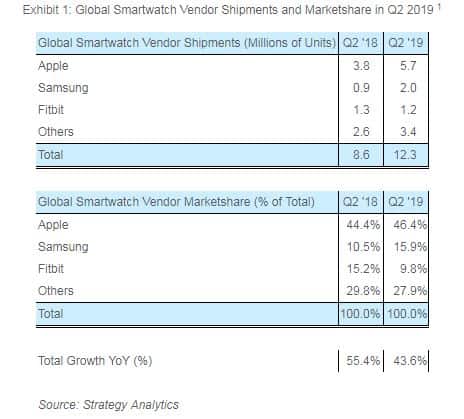