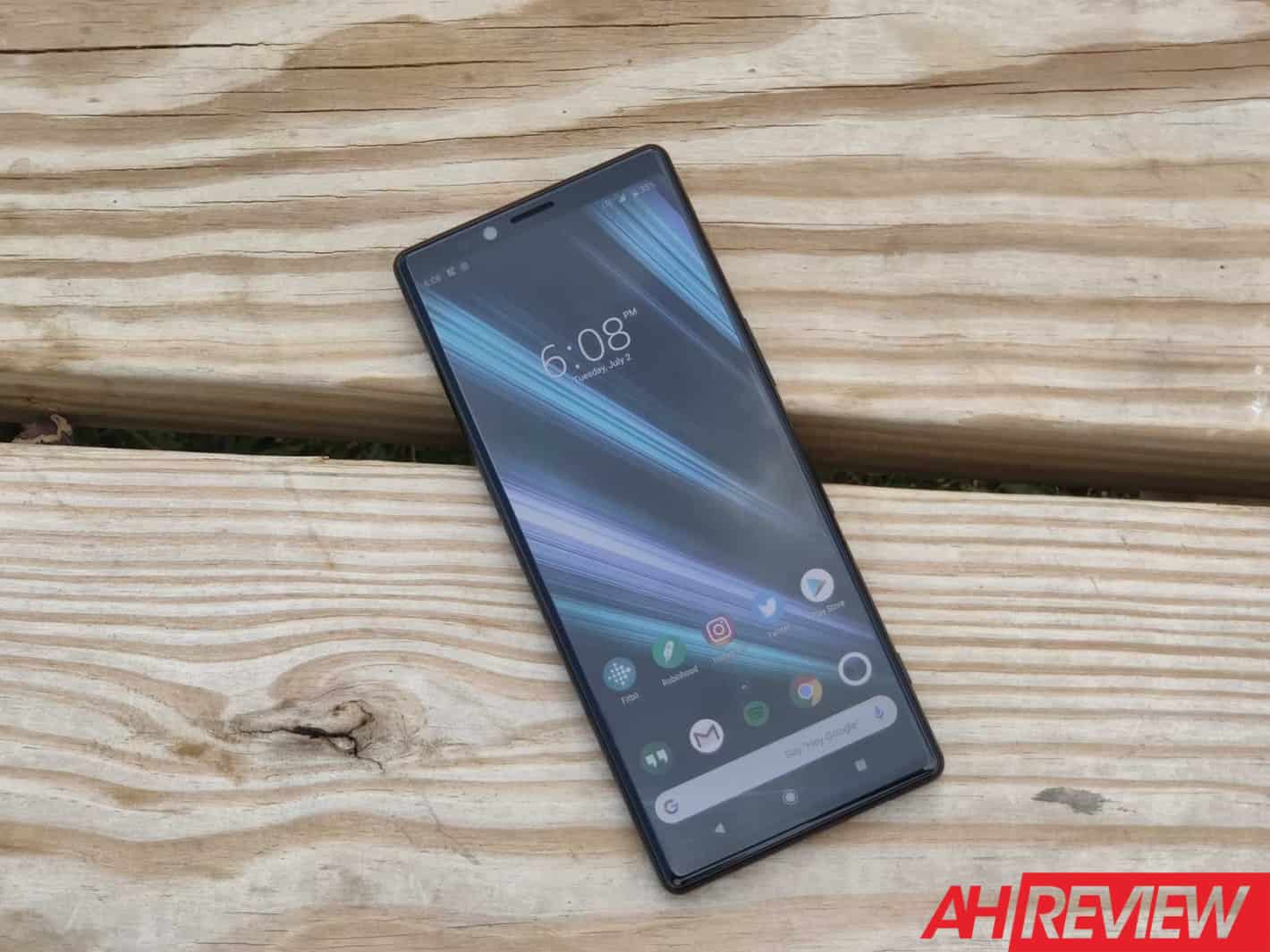 When Sony announced the Xperia 1 way back in February at Mobile World Congress in Barcelona, this looked to be the best smartphone Sony has ever put out. But a lot of time has passed since the initial announcement and the phone actually being available in the US, nearly five months. The question here is, whether the Xperia 1 is just another mediocre smartphone from Sony, or something worth its price tag.

Disclaimer: At AndroidHeadlines, we now do two reviews for each smartphone. There's a "good" review and a "bad" review. This is the good review, where we talk about everything that is great about the Xperia 1, you'll find nothing about how it falls short in this review. That is saved for the bad review, which you can read here.

For a company that is so invested in so many areas of entertainment, it would make sense that the Xperia 1 is the perfect media-consumption device, and it is. This is partially thanks to that 4K OLED HDR display, and the Dolby Atmos-tuned speakers that are also included.

This display, while the aspect ratio is not a popular one, is perhaps one of the best displays we've seen on a smartphone. It isn't quite up to the levels of Samsung's smartphones, but it is pretty darn close. Using this side-by-side with the Galaxy S10+, it was hard to notice a difference between the two. Other than the fact that Sony's display seems to use more "natural" coloring here, instead of using a more saturated look. Which is something that Samsung loves to use, and its users also love it.

It's an OLED display. At this point, there's not a whole lot that needs to be said about an OLED panel, but it does offer some really good coloring and deep blacks. Now what does need to be talked about is the HDR that's here too.

4K OLED HDR is incredible for watching movies on a smartphone

Yes, 4K OLED HDR just sounds like Sony went fishing in alphabet soup, but it actually means something. HDR, which stands for High Dynamic Range, does offer some really rich and colorful pictures on this display. If you are watching a video on YouTube that is just simply 4K, you likely won't notice a difference. But watch something that is shot in 4K HDR, or even just HDR, you will really notice the difference.

A good example of this is the Spider-Man: Far From Home trailer, which Sony pre-loaded onto our review unit (Sony also produced the movie, so it makes sense for it to be promoting it on the Xperia 1). It's a 4K HDR trailer that is also shown in 21:9, so it looks incredible on the Xperia 1. Even though I had seen the trailer many times before receiving the Xperia 1, I was still watching this trailer many, many times on the Xperia 1.

Some video apps do support HDR too, like Netflix and Hulu. Pick out a title that has HDR support, and you're going to be binge watching it all on the Xperia 1.

On paper, it looks like the Xperia 1's battery life is going to be terrible. When I received the device, I figured I'd need to charge this at least twice a day. But luckily, I was wrong. This is because the Xperia 1 has a 3330mAh capacity battery, for a 4K OLED HDR display that is 6.5-inches, that seems really small. Especially when Quad HD+ phones are coming with 4200mAh capacity batteries and still barely lasting through the day.

With the Xperia 1, I was able to get through the entire day on a charge. And this included watching plenty of YouTube and Netflix, as well as browsing Twitter and Instagram.

You might be scratching your head, wondering how this is possible. Well two reasons why. Sony has gone with a nearly stock Android approach on the Xperia 1, which keeps things fast and uses less power. The other is the fact that this is not a 4K display all the time. When you are not watching video or using the camera, the Xperia 1 is not using the full 4K resolution (which is really not 4K anyways, since it is 3840×1644, but close enough). This is something Sony has been doing for the past few years on its "premium" smartphones, so it's no surprise to see that happening again on the Xperia 1.

It's great to see Sony doing a great job with battery management. But I can't help but think that if they had crammed in a much larger battery inside, it would appeal to more people. Say a 4200mAh or even a 4500mAh capacity battery.

Sony's Alpha team brought their A-game to the Xperia 1

Yeah, that 4K OLED HDR display is great and all, but what really got people excited was the fact that Sony's Alpha team was working with the mobile team on the Xperia 1. Meaning that Sony's cameras might finally be pretty good. And well, they do seem to be pretty good on the Xperia 1. In the pictures that I took with the Xperia 1, there were a couple of things that I noticed right away. One, was the fact that there was a ton of detail. Much more than you would normally get on a smartphone. The other thing was, that the coloring was almost perfect. It wasn't too warm, nor too cold, nor was it saturated like (again) a Samsung smartphone would be.

The software is still not perfect here, which is unfortunate, but for those that are just going to open the app and snap a picture, this works really well. The camera app is lightning fast to open, and take a photo. On top of that, Sony has the dedicated shutter button on the Xperia 1, so it really feels like you are using a point-and-shoot camera. It also helps (at least for me) to keep the phone steady while taking a photo. This is particularly important when taking photos with the telephoto lens.

Portrait mode is actually really good on the Xperia 1. This shouldn't be a surprise, given that Sony is a great camera company, but the company has finally brought that expertise to its smartphones. What sets the Xperia 1's Portrait Mode apart from the likes of the Pixel 3, is the fact that it does not do "fake" Bokeh in the background. It's true Bokeh and if you take a portrait shot with the rear-facing camera on the Pixel 3 and Xperia 1, you'll definitely notice the difference.

As always, you can check out some sample photos that we took with the Xperia 1 over on Flickr at the link below. These are all in auto mode, without any edits at all.

This is a very Sony-like design

Sony is pretty well-known for not really changing up its design all that much. If anything, it does small iterations to improve it and change it up a bit. And looking at the Xperia 1, you can definitely tell that this is indeed a Sony smartphone. It has a glass back, with a metal frame, which melts together, forming a really easy to hold smartphone. It does also make it very slippery.

The design here isn't going to win any awards, but it does look very Sony-like. That's not necessarily a bad thing. As people will easily be able to tell that it's a Sony smartphone from a distance.

There's a lot to like about the Sony Xperia 1. It has improved in a lot of places, compared to its previous flagship smartphones. The biggest one being the camera. It's a bit surprising that the camera had taken this long to really come all this way, considering just about every camera in every smartphone, is a Sony sensor. Yet, Sony has lagged behind the competition, pretty large. But that looks to be all behind Sony now, with the Xperia 1. It wouldn't be too crazy to expect the Xperia 2 to improve on the camera even more.

The real question here is, did Sony do enough to justify that $949 price tag that it is asking for? And the answer is going to depend on what you're looking for in a smartphone. Are you looking for a versatile camera that can take some really great looking shots, or a smartphone with a great display for consuming media? Then the Xperia 1 is going to be a really good option. But if this phone is just too tall for you, then you may want to look elsewhere.