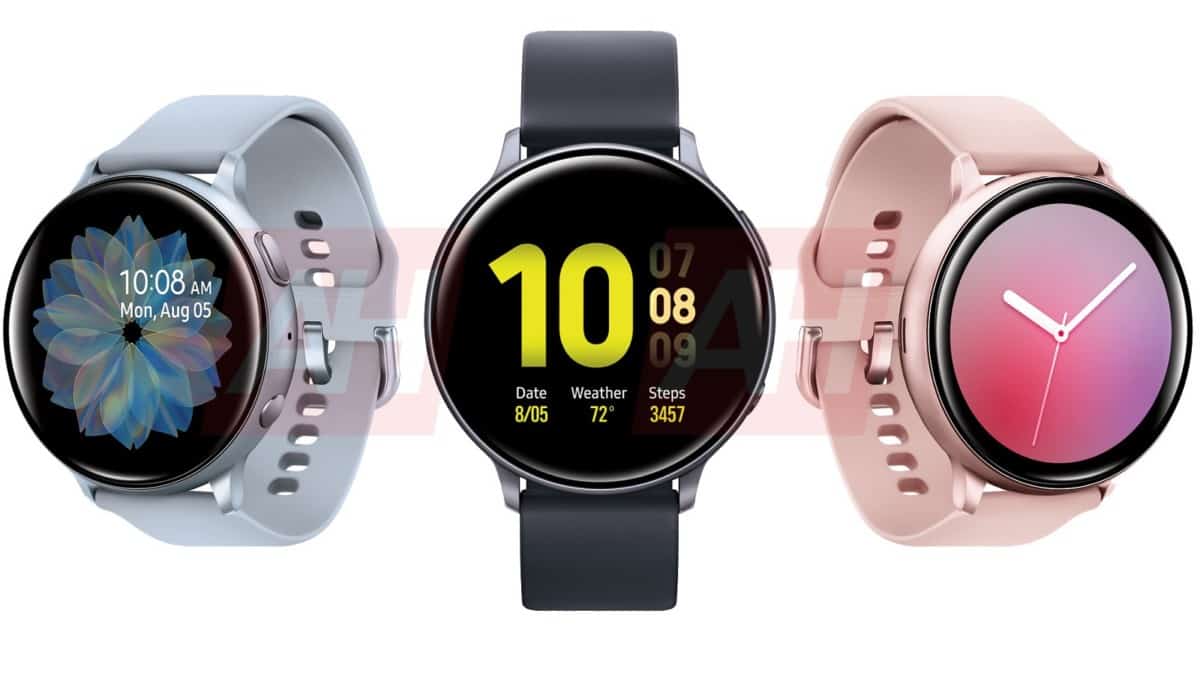 Here’s yet another look at the upcoming Samsung Galaxy Watch Active 2 smartwatch.

This is a device that has leaked on many occasions in the past few weeks including when Android Headlines brought to attention a first look at an official render. Now, we can provide you with a closer (and again, official) look at the smartwatch from all angles and most likely, in all available colors.

That’s not to say the device won’t become available in other colors at launch or later on, but as of right now the understanding is the colors shown here are likely to be the main color options at launch.

What also might be of interest here is the lack of a leather strap. The last official image we shared clearly showed a leather strap in use. While the leather strap is expected to be available as a launch option, it is not detailed in this all-colors image. Instead, Samsung appears to be focusing in on the silicone straps that have migrated over from the previous model.

That’s not the only thing that’s missing here either as previous images have showcased a red ring around the power button. It had previously been speculated this was to denote the LTE variant and while that might be the case, these images do not offer anything in support of that assumption.

Moving beyond the design and many of the main features of this smartwatch have already been detailed and one of the most recent and interesting was the likelihood of touch bezels. In previous Samsung smartwatches, users could physically rotate the bezel to move through the interface. That option was removed with the first Galaxy Watch Active and also looks set to be absent in the Galaxy Watch Active 2.

However, recent rumors do suggest a similar level of interaction will be available, as instead of physically rotating the bezel, the bezel will be touch-sensitive allowing the user to navigate the interface by swiping around the bezel.

Another newer development in the rumor cycle is that the Galaxy Watch Active will come equipped with Bluetooth 5.0 making it the first Samsung smartwatch to do so.

Joining the selling point lineup will be some advanced health-related features, including an ECG monitor and fall detection.

As for the more general spec information, the Galaxy Watch Active 2 is understood to come with a minimum of 768MB RAM, 4GB storage, and powered by Samsung’s own Exynos 9110 chip. There will be two primary sizes on offer consisting of a 40mm option along with a 1.2-inch display and a 44mm option with a 1.4-mm display. Both displays will be Super AMOLED displays with a 360 x 360 resolution. The larger model will feature a 340 mAh capacity battery and this compares to the 247 mAh capacity that’s powering the smaller watch size.

Size won’t be the only choice consumers need to make as it is understood the Galaxy Watch Active 2 will be available in both Wi-Fi-only and LTE variants.

One of the aspects that does not seem to have leaked as much is the pricing although regardless of the price it is understood this will be a fairly rugged smartwatch considering it will come with a number of protections, such as Gorilla Glass, a MIL-STD-810 certification and a 5ATM rating.

It is currently expected that the Samsung Galaxy Watch Active 2 will be officially unveiled next week. It was originally thought this would happen as part of the Galaxy Note 10 event on August 7 but now it looks like it will happen just ahead of that date on August 5.