If you’ve been following the Samsung tablet news then you’ll be aware that although this device has yet to be announced, it has leaked already. Not only have some of the features been reported on, but real-world images of the device have surfaced as well.

Here we plan to take the leaking to the next level as not only has Android Headlines managed to get hold of the official render shown above, but many more to go with it.

These images paint a very clear picture of Samsung’s next flagship tablet and do seem to confirm many of the features that were previously suggested, as well as some additional information that was otherwise unconfirmed.

It had been suggested that Samsung will skip the “Galaxy Tab S5” moniker in favor of not confusing matters with the recently released Galaxy Tab S5e. Android Headlines is of the understanding this is correct and the new tablet will launch as the “Galaxy Tab S6.”

It seems likely this was a decision made recently as some of the images seen by Android Headlines neatly show the “Samsung Galaxy Tab” branding without denoting the number. You can see an example of this in the image below on the front of the tablet book cover. 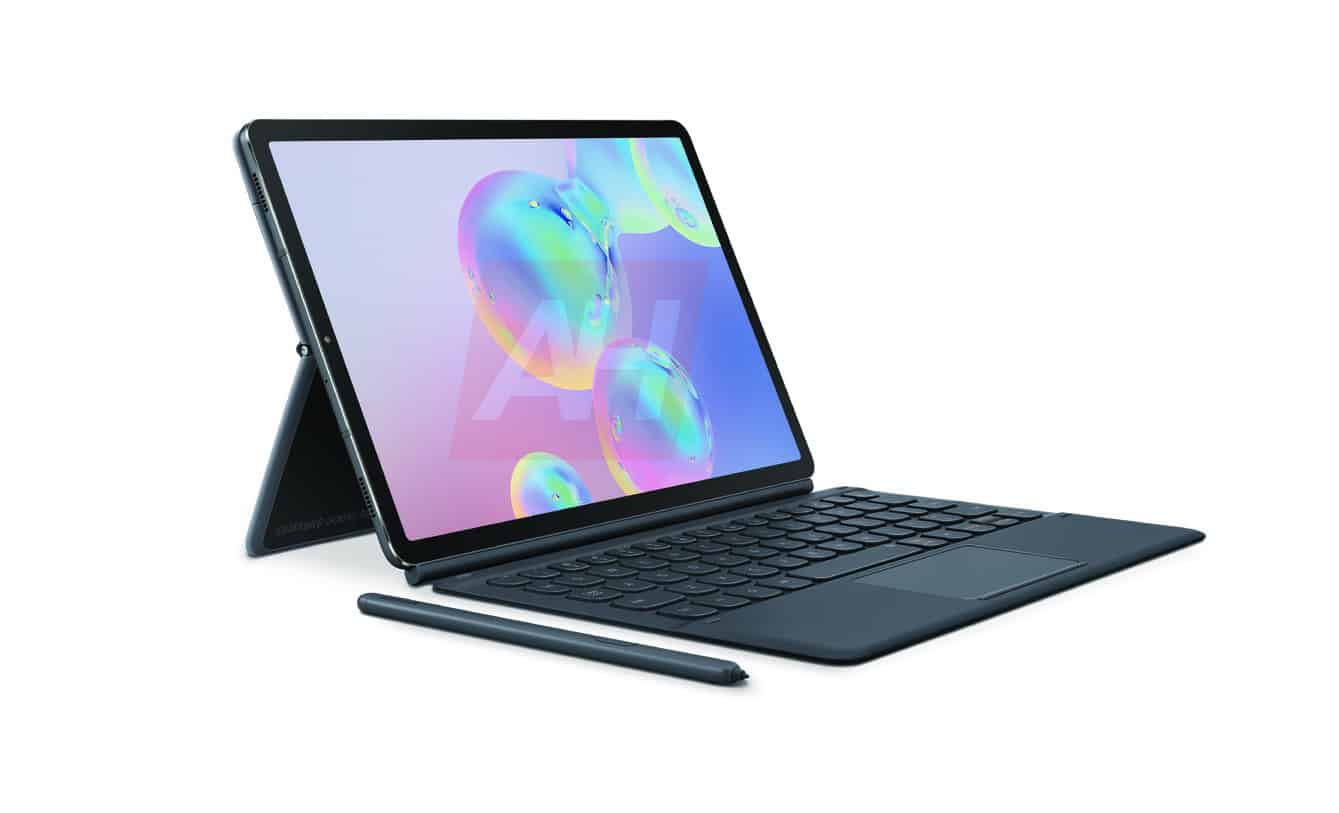 It was already clear that the design of the new tablet is one of the more interesting aspects due to the previously leaked real-life images highlighting a groove on the back that appeared to be designed to house the S Pen. Android Headlines can confirm this is correct. 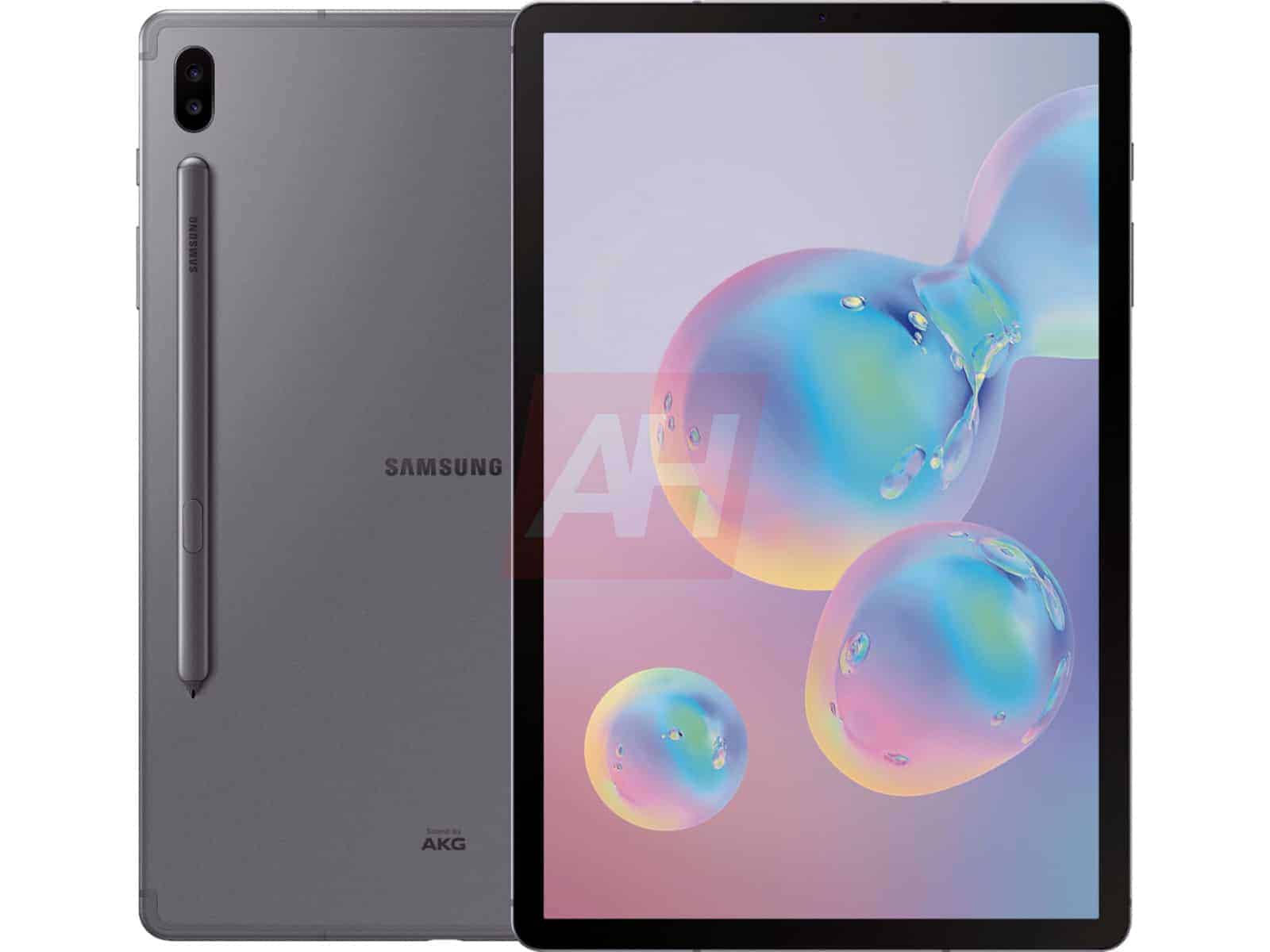 It had also been suggested that this will allow the S Pen to be charged wirelessly by the tablet. Android Headlines is unable to confirm this although based on Samsung’s device-wide approach to Samsung devices charging other Samsung devices, it makes sense.

The S Pen itself also looks like it’s undergone somewhat of a redesign of its own as it has lost the metal ring included with the Galaxy Tab S4 S Pen and appears to have a top cap now. 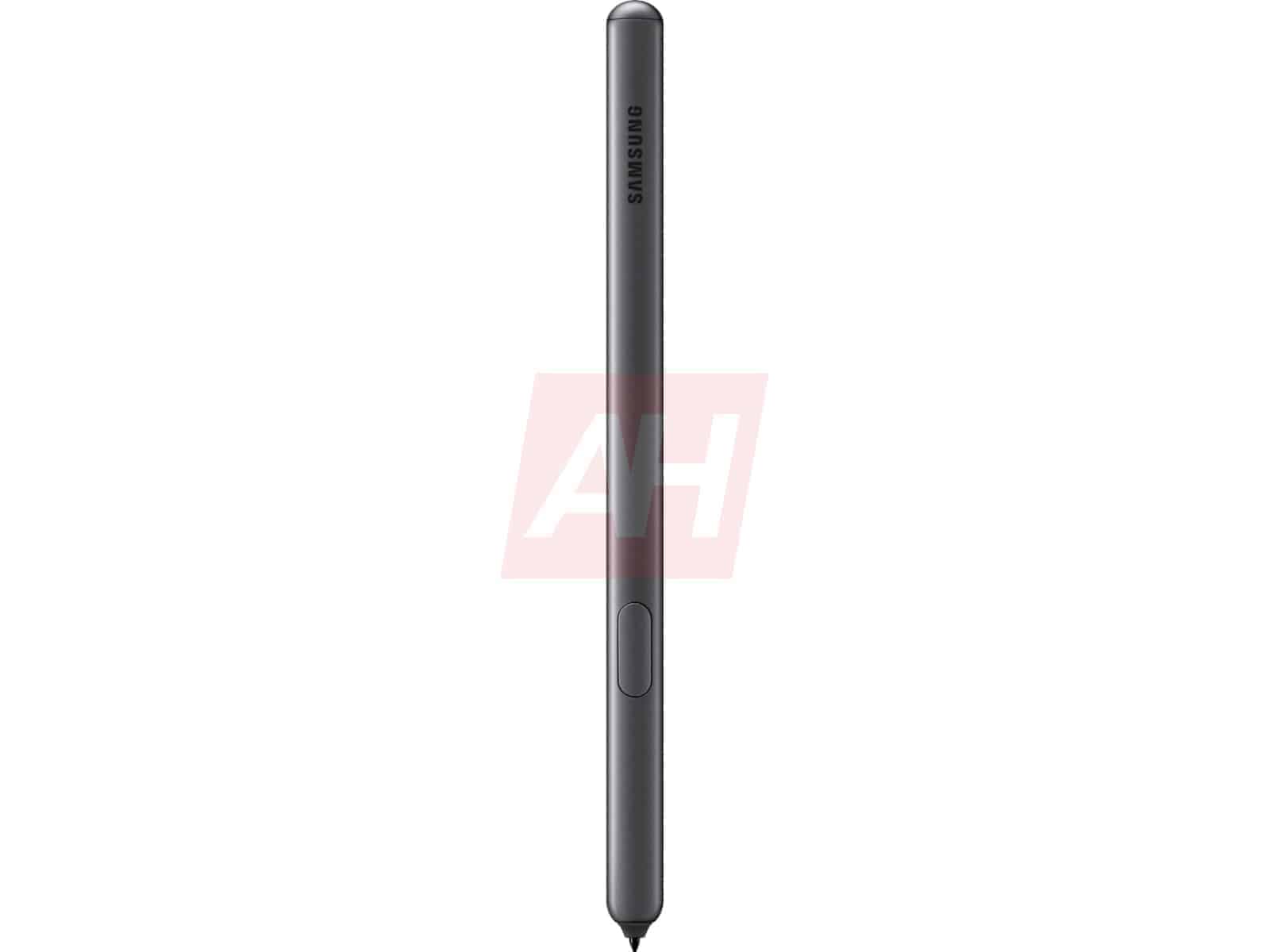 This, along with any other design changes are likely to be the result of the additional features that are said to be on offer. For example, in addition to the wireless charging, the new S Pen is expected to be Bluetooth-enabled.

Arguably, the Bluetooth is likely to be the reason as to why the S Pen needs to be charged in the first place.

Dual cameras are a go

One of the other rumored aspects was the use of a dual camera setup on the back. As the images above and below show, Android Headlines can confirm this is true. It had been said that one of those cameras might be a ToF sensor and while it remains unclear if that is the case, on close inspection the sensors do appear to be a little different. Therefore, at the very least there is going to be some difference(s) between the two sensors although it may just be a matter of the second being a wider lens.

The wide theory seems the more likely and if previous reports are correct, we’re looking at a thirteen-megapixel main sensor along with a five-megapixel wide-angle sensor.

Likewise, there are four speakers once again with two on top and two on the bottom with the bottom two separated by the USB Type-C port. The audio will once again be “Tuned by AKG.” 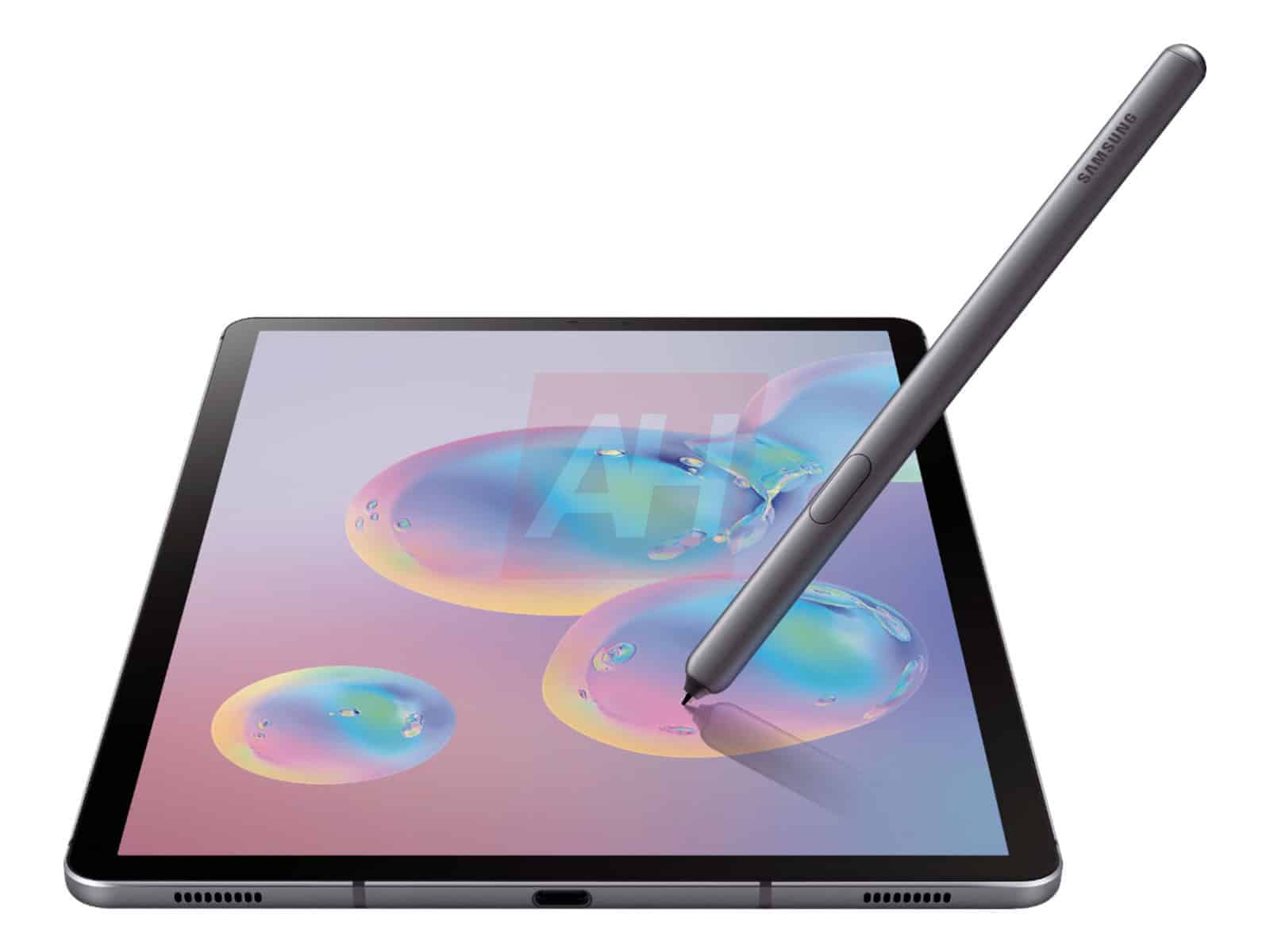 In addition, the same POGO pins are in effect and these will likely be used to connect the Galaxy Tab S6 to the keyboard accessory and may also work with a charging dock – as was the case with the Galaxy Tab S4.

The tablet depicted in these images appears to be an LTE version so it would be assumed the Galaxy Tab S6 will launch in both LTE and Wi-Fi-only versions.

Lastly, there will be a selection of colors to choose from and previously it had been suggested the tablet will be available in blue, brown and grey colors. Android Headlines cannot confirm all those colors, but can confirm what appears to be a choice between grey, light blue and what is likely a pink or rose gold.

That’s not to say they will be the only colors, or banded as described, just the color options Android Headlines is currently aware of.

What’s unclear is the fingerprint sensor

It’s no secret Samsung removed the fingerprint sensor with the Galaxy Tab S4. However, it has been suggested that the new model would come with an in-display fingerprint sensor. That may or may not be the case. All we can say about this point is the images seen by Android Headlines do not indicate a fingerprint sensor is included – physical button or otherwise.

Again, that’s not to say one won’t be offered, just there’s no direct indication that’s the case. For example, the images provided here do not appear to show as many sensors on the front panel which might suggest an iris scanner (one was included with the Galaxy Tab S4) might not be part of the equation. 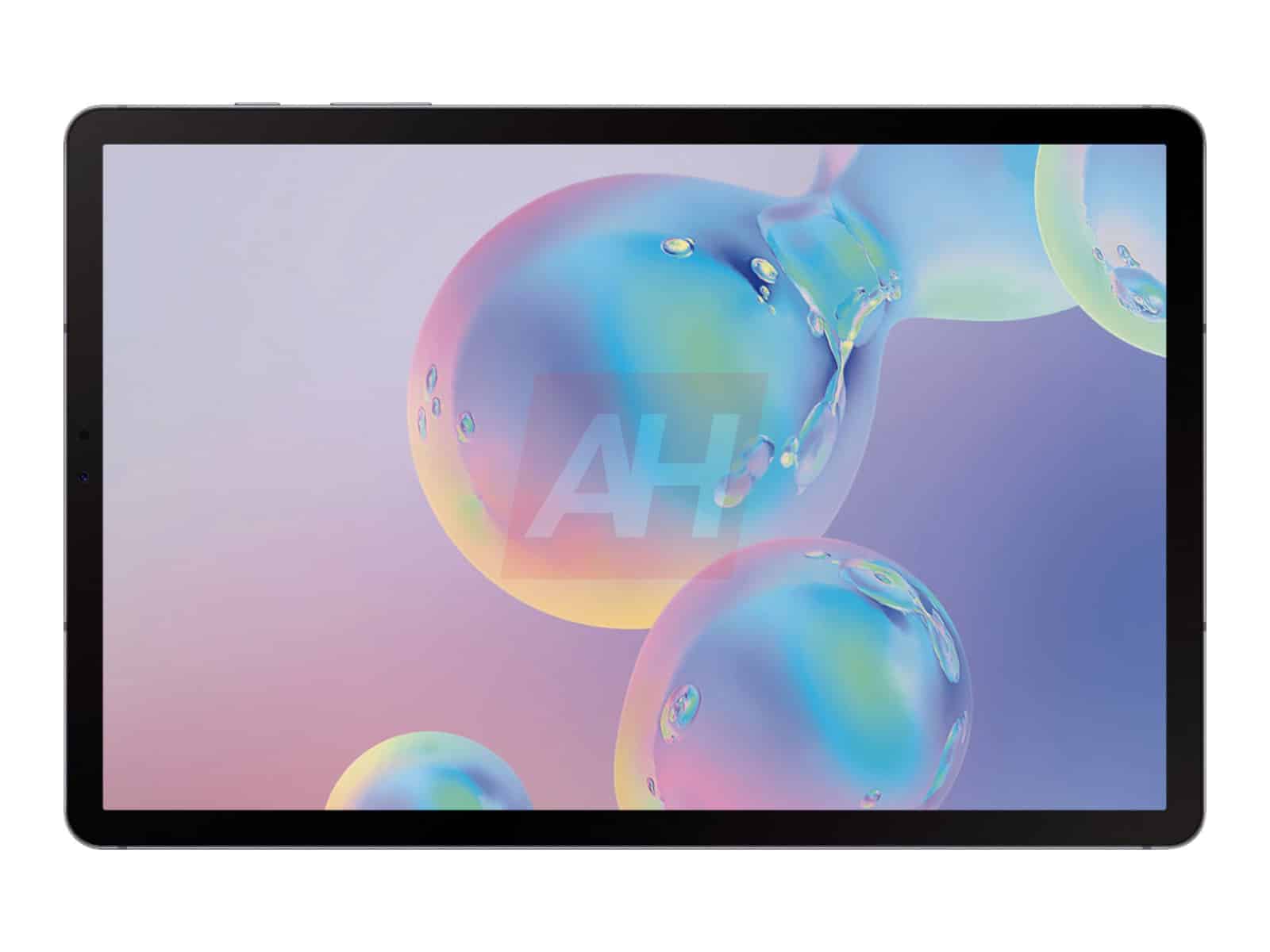 Both possibilities seem equally likely at the moment.

Android Headlines is unable to add confirmation to the specs, however, previous reports have pointed to a fairly high-end offering boasting the latest specs. Those reports say the Galaxy Tab S6 will feature a 10.5-inch display along with 6GB RAM, 128GB storage (option to upgrade to 256GB) and the device will be powered by the Qualcomm Snapdragon 855 SoC along with a 6,840 mAh capacity battery.

Android 9 Pie is also expected to be the Android version in use.

The two big questions that still remain is when is the Galaxy Tab S6 going to launch and how much it will cost? In respect of the first question, there has been some confusion as to whether the device will be announced alongside the Samsung Galaxy Note10 and especially considering Samsung opted to launch the Galaxy Tab S4 a few days before the Galaxy Note9.

Android Headlines is of the understanding the Galaxy Tab S6 will launch with the Galaxy Note10 on August 7. That may change, but as of right now that’s the information we have.

As for the price, that still remains an unknown but considering this appears to be the most premium-built and high-spec tablet to come from Samsung, you can expect it to be expensive.