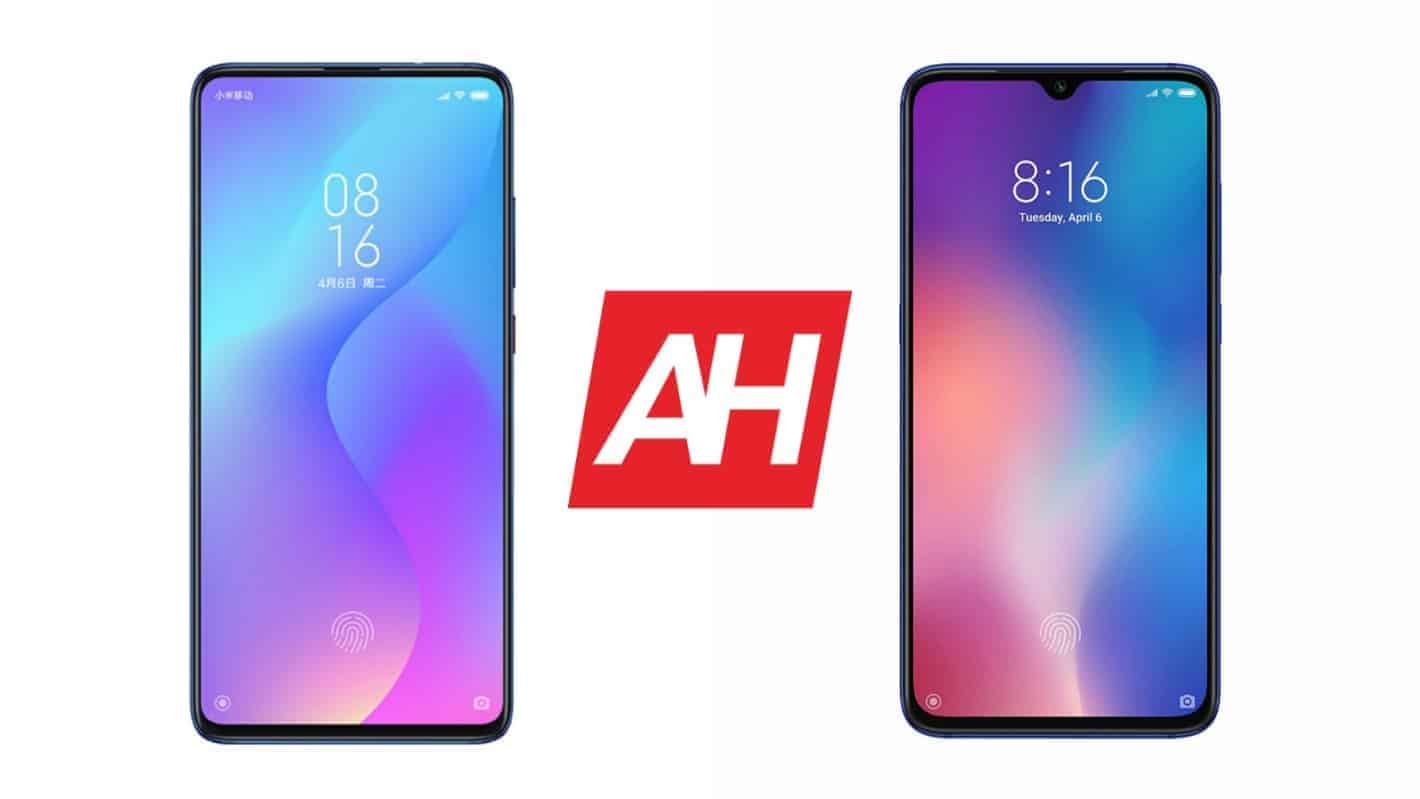 The Xiaomi Mi 9 was announced back in February, as Xiaomi's flagship smartphone. Well, earlier this year, Xiaomi announced that Redmi is becoming a separate entity, so the company is not releasing phones under the "Redmi" branding, without "Xiaomi" branding.

Having said that, the Redmi K20 Pro is the company's very first flagship handset, and it's a competitor to many phones out there, including Xiaomi's Mi 9 handset. The Redmi K20 Pro is really affordable, as is the Mi 9, and it comes with the same flagship processor as the Xiaomi Mi 9.

Both of these smartphones are quite compelling, and in some ways they are similar, but there are plenty of differences here worth noting, which is why we're here to compare the two devices. If you've been wondering which of the two to get, here's our comparison, and we do hope that it will help you out.

As far as the in-hand feel is concerned, there's not much difference here. Both phones are made out of metal and glass, they're similar in size, and they're extremely slippery. That glass back in addition to curves on the sides do make them quite slippery, especially if your hands are dry.

The Xiaomi Mi 9 is considerably lighter, though, about 18 grams lighter. The two devices are approximately the same height and width, even though technically the Redmi K20 Pro is a little bit shorter and narrower. The Redmi K20 Pro is also thicker than the Mi 9, for about a millimeter.

Both phones include three cameras on the back, and in both cases those cameras are vertically-aligned. The Redmi K20 Pro's cameras are centered, while the Xiaomi Mi 9's are placed in the top-left corner of the device's back.

The Redmi K20 Pro does look a bit sleeker than the Mi 9, as it does not have a notch on the display. Both devices feature an extremely thin bottom bezel, but the Xiaomi Mi 9 includes a waterdrop notch, while the Redmi K20 Pro does not. That notch is not large, but it still takes away from the overall design.

Considering everything, we do believe that the Redmi K20 Pro takes this category. Not only is its design cleaner on the front, but it does bring more flare on the back as well, even though the Mi 9 is also a nice-looking device.

Truth be said, there's not much to compare in the display section, as these two displays feature the exact same display. Both phones come with a 6.39-inch fullHD+ Super AMOLED display, and that display is similarly-tuned as well.

Viewing angles are great on both displays, while both offer really nice color reproduction, and those deep AMOLED blacks. Both displays are flat, and even though the Mi 9 offers better protection and HDR10 support, these two panels are way too similar for us to select a winner in this category.

So, what about performance? Well, the two phones are quite similar in that regard as well, not only are they fueled by the same processor, but they do come in the very same RAM options, and both ship with MIUI 10 on top of Android 9 Pie.

None of that is a bad thing, though, as both devices simply fly in day-to-day usage. These two devices are extremely fast no matter if you're browsing, typing, multitasking, or playing demanding games.

MIUI has come a long way, and MIUI 10 is actually a really compelling skin, which works great on both devices. That skin is filled with extra functions, and in some ways, it's more functional than stock Android, its overview / multitasking is way more functional, for example.

All in all, these two phones are way too similar in terms of performance in order for us to pick just one, so… this category ends up in a tie as well.

What about battery life, are the two phones that similar in this category as well? Well, no. The Redmi K20 Pro actually has quite an advantage here, and the main reason for that is a large 4,000mAh battery that Redmi opted to include in this phone.

The two phones have a really similar build of MIUI 10, the same display, same RAM counts, and so on… so we presume that the battery life would be similar if the Redmi K20 Pro included a 3,330mAh unit like the Mi 9, but it doesn't.

The Xiaomi Mi 9's battery life is not bad by any means, but if you're a heavy user, there's no way the device will last you a whole day, which is something the Redmi K20 Pro can pull off. The Redmi K20 Pro can easily get you over 6 hours of screen-on-time, though it all depends on your usage, of course.

As far as charging is concerned, both devices offer 27W wired charging, which is plenty fast. The Xiaomi Mi 9 also offers 20W fast wireless charging, while the Redmi K20 Pro, unfortunately, do not.

If you're in need of wireless charging and do not need great battery life, the Xiaomi Mi 9 is the phone for you, but the Redmi K20 Pro wins this category as it can provide you with a lot more battery juice from one charge to the next.

The Redmi K20 Pro and Xiaomi Mi 9 sport the very same main sensor, Sony's IMX586 sensor, though the other two cameras on the back are different. Both phones include telephoto and ultrawide second and third camera, in the Redmi K20 Pro's case we're looking at 8 and 13-megapixel cameras, while the Mi 9 includes 12 and 16-megapixel units in addition to its main sensor.

Both devices sport a 20-megapixel camera on the front, though it's not the same one. Also, the Redmi K20 Pro's is motorized, while the Mi 9's is not. If you're wondering about camera results, well… both phones are quite capable in daylight, they both produce nice colors, solid dynamic range, and don't tend to overexpose basically anything.

When the light goes away, however, we've noticed that the Mi 9 offers better results. The Xiaomi MI 9 is not the best low light smartphone out there, not even close, but it's a level above the Redmi K20 Pro. The Redmi K20 Pro's camera will probably get better with time, as Redmi continues to release updates, but at the moment, the Mi 9 has an advantage.

The RedmI K20 Pro also supports 24-bit/192kHz audio, and while the Xiaomi Mi 9 is capable of producing solid audio output when headphones are plugged in, the Redmi K20 Pro can offer a bit more in that department… though not much, the reproduction is somewhat similar.

Loudspeakers get pretty loud on both devices, though you will notice some distortion at high volumes. Both loudspeakers are good, but not great. The Redmi K20 Pro does have a small advantage overall in this category.

What's the verdict? Well, believe it or not, the Redmi K20 Pro is actually the winner of this comparison. The phone offers better battery life, looks nicer, and even offers more in the audio department.

The Xiaomi MI 9 does win the camera comparison, while you'll notice that these two devices offer similar performance, while their displays are identical with similar output. It all depends on what you're looking for in a device, but the Redmi K20 Pro is the winner, all things considered.