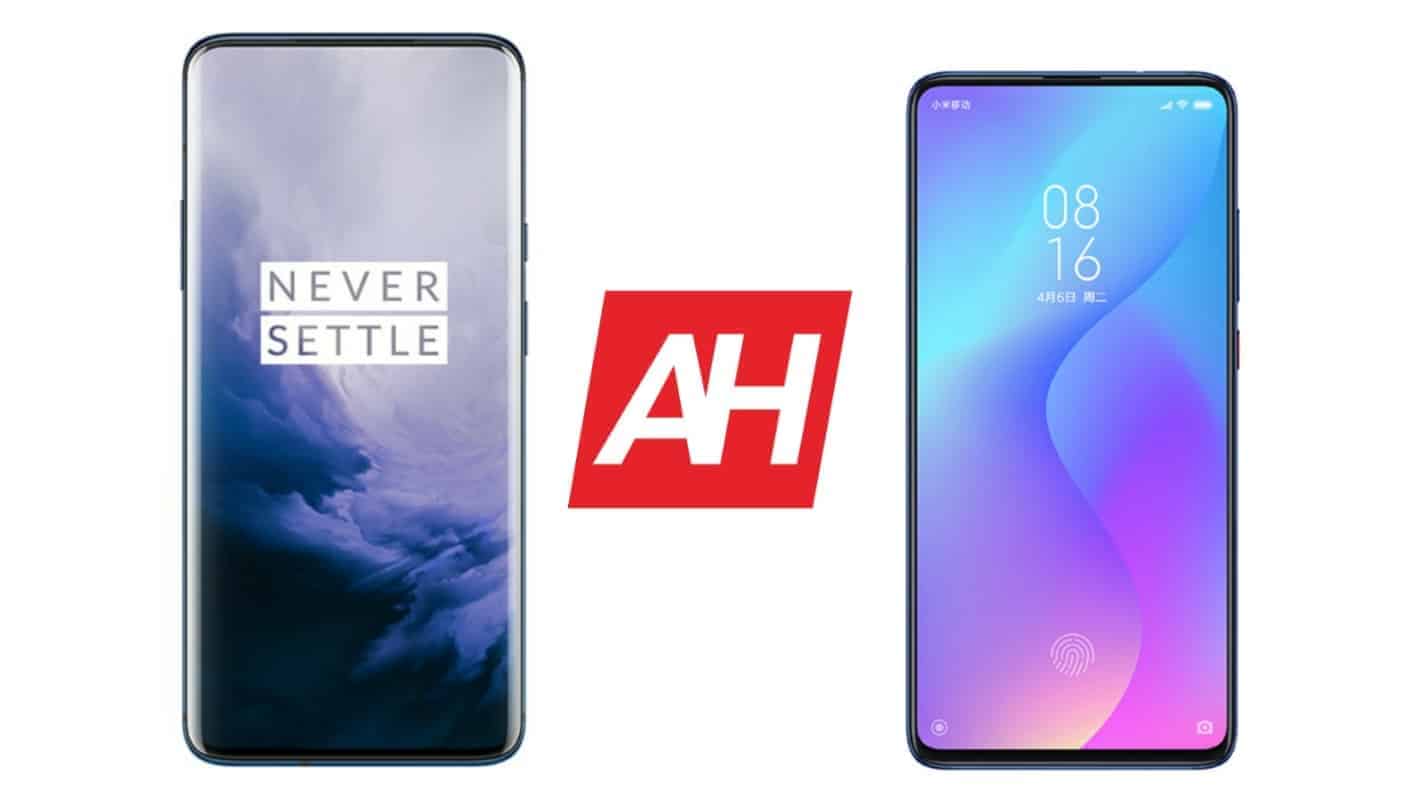 The OnePlus 7 Pro is one of the hottest devices on the market at the moment, while the Redmi K20 Pro managed to surprise many people, and is actually a worthy competitor to the big hitters out in the market.

Well, we've decided to pit the two phones one against the other, just to see how they compare across a number of categories.

These two smartphones are actually quite similar in terms of the design. Both phones utilize a motorized front-facing camera, which appears only when you call upon it from the camera application.

This move allowed both companies to almost completely remove bezels from these two phones, and to avoid implementing notches and display holes. Both phones do have a "chin" below the display, but that bezel is extremely thin.

Unlike the Redmi K20 Pro, the OnePlus 7 Pro does include a curved display, while both phones feature rounded display corners. Both devices also include an in-display fingerprint scanner, which is why a regular fingerprint scanner is not visible on either of the two phones.

Both devices feature three vertically aligned cameras on the back, though the design of those cameras setups is different in comparison. The Redmi K20 Pro also includes an interesting pattern on the back, which you'll either love or hate. The Redmi K20 Pro is narrower, shorter, and lighter than the OnePlus 7 Pro, which is not surprising considering that the OnePlus 7 Pro has a considerably larger display.

It's hard to deny that both of these phones are really nice looking, and truth be said, they look quite similar. We'll call this one a draw, as they're too similar to opt for only one, it all depends on whether you prefer larger or smaller phones, and if you like curved or flat displays.

These two devices offer the same display aspect ratio of 19.5:9, and both of those displays are really nice looking, with really nice colors, viewing angles, and those deep AMOLED blacks that people seem to love so much.

The OnePlus 7 Pro's display is a step above the Redmi K20 Pro's, though. Not only is it considerably sharper, but it also seems to be tuned a bit better. Samsung manufactured that display, and quite probably tuned it to OnePlus' specifications.

Both devices include really nice displays, but the Redmi K20 Pro's panel cannot compare to the OnePlus 7 Pro's. The OnePlus 7 Pro has a sharper, and overall better display, with a higher refresh rate, so it wins this category.

The OnePlus 7 Pro and Redmi K20 Pro are fueled by the same processor, the Snapdragon 855, while both of them come with plenty of RAM. In the OnePlus 7 Pro's case, you can choose between 6GB, 8GB, and 12GB RAM variants, while the Redmi K20 Pro comes in 6GB and 8GB RAM flavors.

Android 9 Pie comes pre-installed on both phones, but skins on top of Google's OS are different. The OnePlus 7 Pro features OxygenOS 9.5, while the Redmi K20 Pro comes with Xiaomi's MIUI 10 skin.

Both of those skins are quite compelling, but OxygenOS seems to be a step above in terms of performance. We've noticed less stutters in OxygenOS on the OnePlus 7 Pro, while that 90Hz refresh rate only makes the phone more of a joy to use.

To sum up, both of these phones are amazing performers, but the OnePlus 7 Pro seems to be a tiny bit better in that department, and if you like stock Android, OxygenOS is similar to it, with some added functionality. MIUI 10 is great, but considerably different to stock Android, it all depends on what you prefer, but both are excellent performers.

Both of these phones include really large battery packs, they both feature 4,000mAh batteries. Large batteries do not necessarily mean great battery life, but in the case of these two phones, they sure do.

The OnePlus 7 Pro and Redmi K20 Pro offer truly great battery life. The OnePlus 7 Pro can provide you with a bit more battery life when you disable the 90Hz refresh rate, but OnePlus optimized the phone quite a bit since it was launched with a ton of updates, that the difference is not too noticeable.

Even with the 90Hz refresh rate, the OnePlus 7 Pro is on par with the Redmi K20 Pro in terms of battery life. Both of these phones are capable to push you well over 6 hours of screen-on-time, at least most of you (it all depends on usage, of course).

Both of them include extremely fast charging as well, the OnePlus 7 Pro supports 30W Warp Charge fast charging, while the Redmi K20 Pro offers 27W Quick Charge 4+ fast charging. None of the two phones support wireless charging, though, if that's something you're looking for. Both phones offer great battery life, and it's hard not to call this one a tie.

So, what's the situation in the camera department? Well, both of these devices have the same main sensor, Sony's IMX586 unit, which is actually quite capable with the right software. We're looking at a 48-megapixel main sensor on both devices, while both of them feature three cameras on the back.

In addition to the main sensor, both phones offer telephoto and ultrawide cameras on the back. The OnePlus 7 Pro's telephoto lens can zoom in farther without losing any quality, while both main cameras are quite capable in regular light.

In daylight, both phones can capture great images, with plenty of detail, great colors, and really good dynamic range. When the light is gone, though, the OnePlus 7 Pro will make more people happy.

OnePlus optimized the OnePlus 7 Pro's camera a lot via updates, and it shows. Its Nightscape low light mode is really capable, it allows more light to enter the image, while it actually does a good job at balancing the image. The Redmi K20 Pro's low light images end up being noticeable darker, and they're not that good in general, they're okay, but cannot compare to what the OnePlus 7 Pro can provide.

Both devices can shoot 4K video at 60FPS, while neither of them are great at that setting, but both of them can provide really compelling video results at fullHD 60FPS, though the OnePlus 7 Pro's stabilization is a bit better. Overall, the OnePlus 7 Pro offers more in the camera department.

What about audio? Well, each of the two devices have their ups and downs in this category. The OnePlus 7 Pro, for example, includes stereo speakers, and they're really good, Dolby Atmos support is a part of this package, and with the right content, the phone can provide great audio, but it does not have a 3.5mm headphone jack.

The Redmi K20 Pro, on the other hand, does not offer stereo speakers, but it does have a 3.5mm headphone jack. The phone does not come with Dolby Atmos support, but it provides 24-bit/192KHz audio.

So, which one is better? Well, it all depends on what you need out of a device. In terms of general output, with the headphones plugged in, the OnePlus 7 Pro can provide you with a more balanced sound, the same goes when you plug the headphone out of the device. The Redmi K20 Pro is not far, as far as sound quality with the headphones plugged in is concerned, but it cannot compete when you're using the loudspeaker. The Redmi K20 Pro does have a headphone jack, though, so it's a huge plus for the device.

This is a close call, but due to its stereo speakers, and Dolby Atmos support, the OnePlus 7 Pro is a step ahead when it comes to sound quality and audio offerings in general, so it wins this category.

So, overall, the OnePlus 7 Pro comes out on top in this comparison, but the Redmi K20 Pro was extremely close in plenty of these categories. If you take into account the price tag of the Redmi K20 Pro, many would argue that it's a better option.

If you're on a budget and want to get a flagship-grade phone, the Redmi K20 Pro is one of the best offerings out there, but if money is not an issue, and you can get the OnePlus 7 Pro, the device does have more to offer overall.

The OnePlus 7 Pro is a bit better in terms of performance, it offers a better display, while it will offer a bit more in the audio department as well, not to mention a better camera experience than the Redmi K20 Pro. Both are great options, though, so… it's up to you.