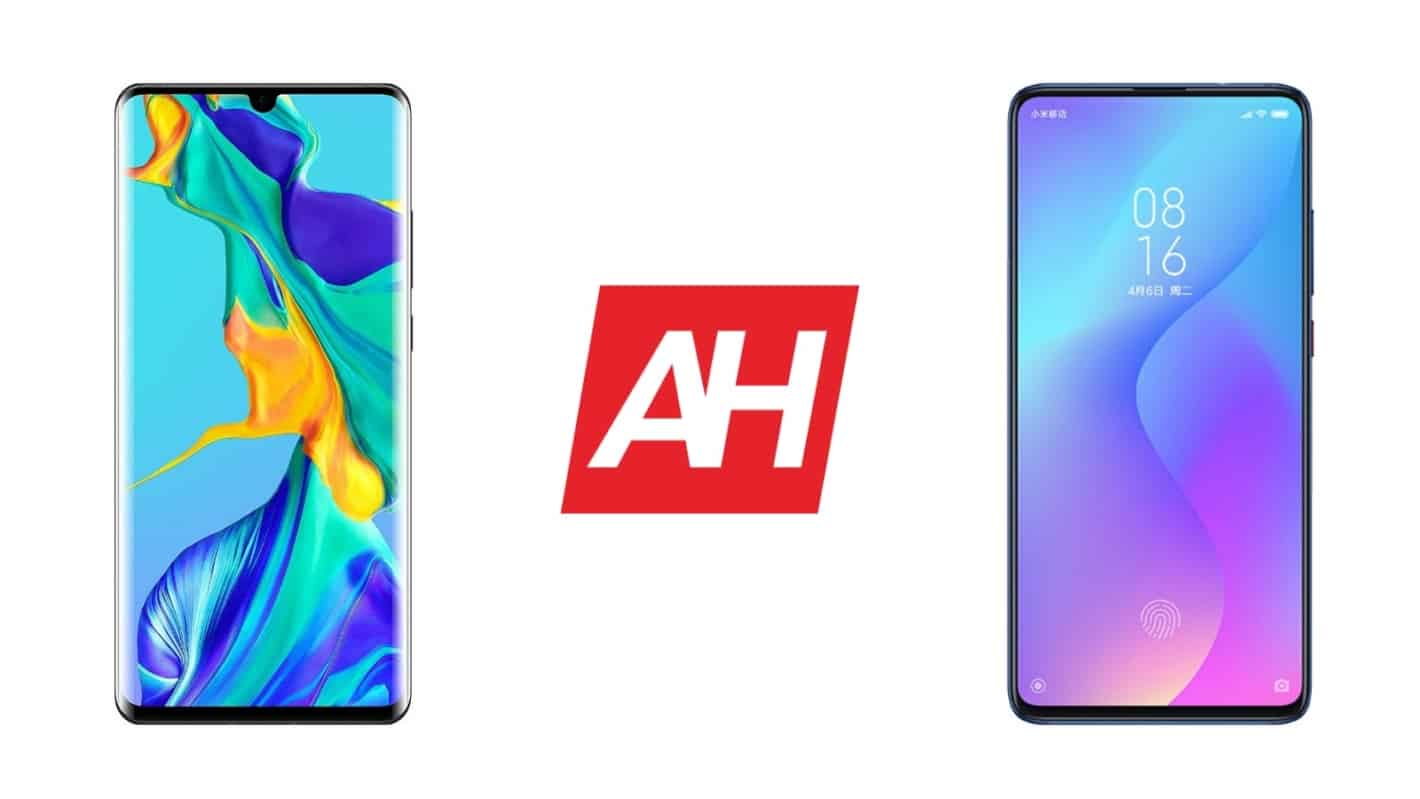 Having said that, both of these phones are really good, needless to say, but each of them has its own advantages and shortcomings. In this comparison, we'll try to see which phone is better in specific categories, as we do in every comparison.

This comparison will hopefully be able to help some of you decide which of the two phones to purchase, whether it's worth saving some cash and getting the Redmi K20 Pro, or go for the Huawei P30 Pro.

Both of these phones are made out of metal and glass, and both are curved on the back, but despite that, they look different, while the in-hand feel is also considerably different. The Huawei P30 Pro includes a tiny dewdrop notch on the front, and a thin "chin" below the display. The Redmi K20 Pro, on the other hand, does not sport a notch, but it does come with a "chin" as well.

The two phones are almost equally tall, while they're similar in terms of thickness and weight as well. The Huawei P30 Pro's cameras are placed in the top-left corner of its back, while the Redmi K20 Pro's are centered in the upper portion of the phone's back side. Both camera setups protrude on the back a bit.

The Redmi K20 Pro's display is protected by a sheet of Gorilla Glass 5, while we still do not know what kind of protection Huawei used, though it's probably either Gorilla Glass 5 or 6. The Huawei P30 Pro's panel supports HDR10 content, while the Redmi K20 Pro has HDR support, but not HDR10.

In terms of display quality, we have to say that both displays look really great, for fullHD+ displays, that is. Both panels offer really good viewing angles, and punchy colors. Blacks are of course great on both, as these are OLED panels. We can't really pick between the two, both look really good, it only depends on whether you prefer flat or curved panels.

Both of these smartphones are packed with flagship hardware, and they both ship with Android 9 Pie out of the box. On top of Google's software, though, lie Huawei's and Xiaomi's skins, EMUI and MIUI.

The Huawei P30 Pro is fueled by the Kirin 980, the company's most powerful chip, while the Redmi K20 Pro comes with the Snapdragon 855, the very best Qualcomm has to offer at the moment.

You'll also find plenty of RAM in both phones, either 6GB or 8GB, depending on the model, and both of these phones perform admirably. EMUI and MIUI have come a long way over the years, and both are really compelling builds of Android, that's for sure, it only depends on what you prefer.

You will notice very few stutters on both devices, as both can handle pretty much anything you throw at them, including some processor and GPU-heavy games. Multitasking and day-to-day performance is also great. Having all that in mind, this is yet another category we'll conclude in a tie, as both are truly great performers, and are on par in that regard.

Both of these devices include fairly large battery packs, the Huawei P30 Pro comes with a 4,200mAh unit, while the Redmi K20 Pro sports a 4,000mAh battery. In terms of sheer longevity, well, they're both pretty great.

For most of you, both of these phones will be able to last through the day, even if you're a heavy user, presuming that you're not gaming all day or something of the sort. Both devices are capable of pushing past that 6-hour screen-on-time mark (though your usage may vary), with ease.

The Huawei P30 Pro also has that crazy periscope camera on the back which allows you to zoom in far, far away objects with ease. Both phones can take really good pictures during the day, but the Huawei P30 Pro has the advantage in colors, detail, and dynamic range, not a huge advantage, but still.

When the light goes away, the Redmi K20 Pro cannot compare to the P30 Pro. The device does take okay images in low light, but the Huawei P30 Pro offers plenty of detail, very little noise, and generally really great low light images, especially if you utilize its special mode for low light photography.

The Huawei P30 Pro's front-facing camera is also capable of providing a bit better results than the Redmi K20 Pro's, even though the difference is not that large at all. The Huawei P30 Pro is the winner here, no doubt.

Neither of these two phones offers stereo speakers, but a single loudspeaker on both is really good, actually. Speaker on both phones is plenty loud, and it offers good sound quality in general.

When you plug your headphones in, you will definitely hear the difference between these two devices, as the Huawei P30 Pro offers richer, and more balanced sound, though the Redmi K20 Pro is not bad in this regard, at all. The Huawei P30 Pro is better in this category overall, though, despite the fact it lacks a 3.5mm headphone jack.

So, what's the gist? Well, the Huawei P30 Pro is the better phone overall, no doubt about that, but the Redmi K20 Pro has its upsides. The Redmi K20 Pro can compete in the display and performance departments, while it also looks better of the two, at least in our opinion.

The Huawei P30 Pro is probably the ultimate camera phone at the moment, next to the Pixel 3 devices, so if you're in the market for a great camera phone, the P30 Pro has the advantage. Huawei's phone is also better in terms of audio, while it also has the advantage in the battery life department.