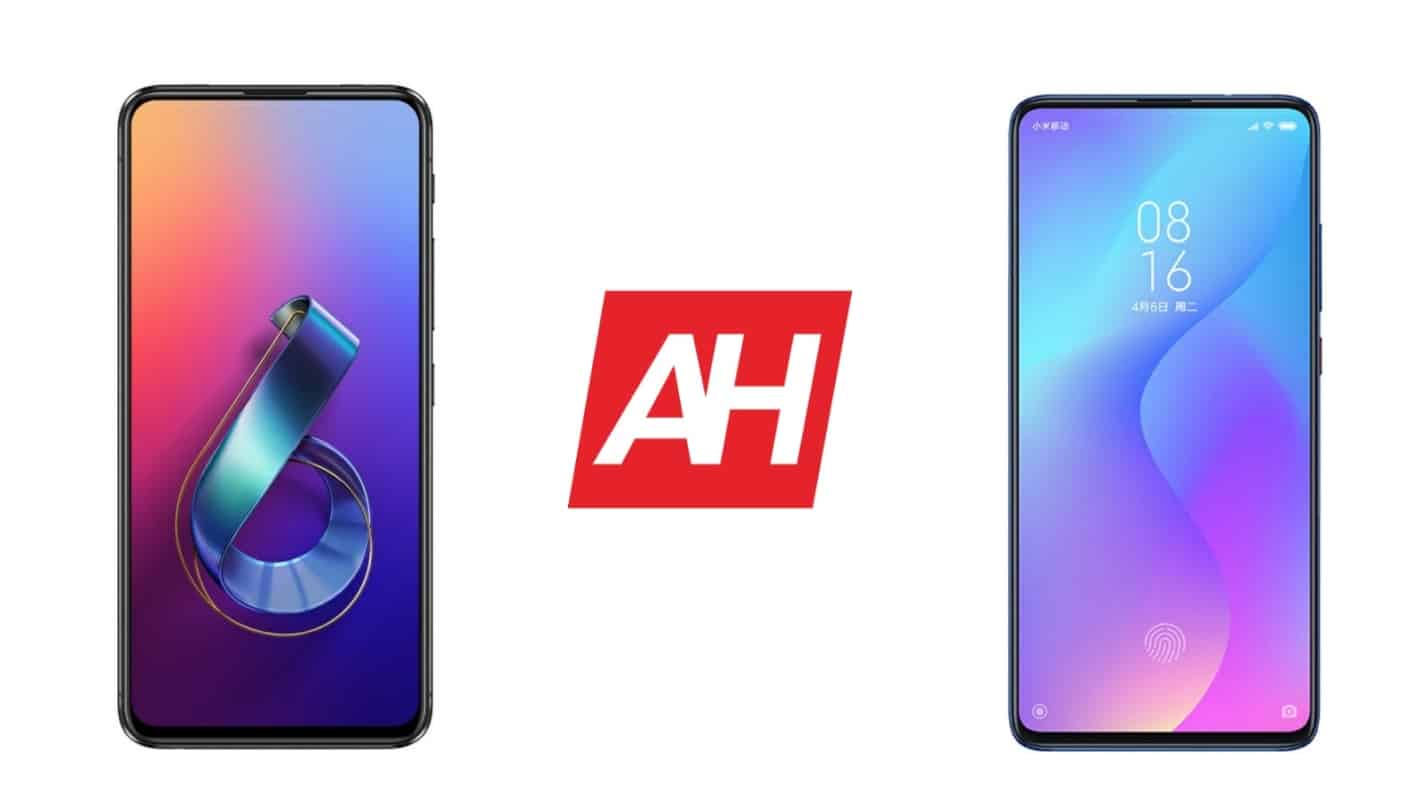 The ASUS ZenFone 6 and Redmi K20 Pro are both flagship smartphones, the very best ASUS and Redmi have to offer at the moment. Having said that, these two phones are extremely similar in one regard, they’re both affordable flagships, and their price tags are not that far apart.

These two phones should be on the radar of people who are not willing to spend a lot to get a flagship-grade product, and they are similar in some ways, different in others, which is why we’re here, as we’ll compare the two devices.

The ASUS ZenFone 6 and Redmi K20 Pro will get compared in a number of categories, starting with their specifications. If you’re on the fence on which of the two devices to purchase, read on, we may be able to help you decide.

Both ASUS and Redmi have opted not to include a display notch or hole on their flagship smartphones for 2019, and for the most part, that is a good thing, at least if you appreciate nice-looking phones, and are easily annoyed by notches / display holes.

The ASUS ZenFone 6 features a flip camera setup, it uses its two rear-facing camera s front-facing ones, while the Redmi K20 Pro includes a pop-up camera. Both devices have extremely thin bezels, and a “chin” below the display. Bezels on the Redmi K20 Pro are a bit thinner, though.

The Redmi K20 Pro is shorter, narrower, and thinner, despite the fact their display sizes are almost identical (6.4 vs 6.39 inches), while the two phones also offer the same display aspect ratio. These two phones are the same weight, pretty much, 190 vs 191 grams.

All things considered, the Redmi K20 Pro wins this round. Its back side looks much nicer, the phone is thinner, narrower, and shorter despite the fact it has the same display size as the ZenFone 6, essentially. On top of everything, its bezels are noticeably thinner all around, so… we’ll give this one to the Redmi K20 Pro.

Despite the fact the Redmi K20 Pro does not offer HDR10 support or Gorilla Glass 6, its display does look nicer in this comparison. Blacks are much more pronounced on it, as it is an OLED panel after all, while colors are more saturated as well. The ZenFone 6’s display looks really nice, but it’s not that vibrant in comparison to the Redmi K20 Pro’s, and that is what people really dig these days.

Both displays offer really good viewing angles, so you don’t have to worry about that. The Redmi K20 Pro is the winner in this category.

Both devices are fueled by the same processor, the Snapdragon 855, which is Qualcomm’s most powerful chip at the moment. Having said that, both devices also offer two RAM variants, with either 6GB or 8GB of RAM.

That, in combination with Android 9 Pie that comes out of the box, and fullHD displays, results in a really great performance on both devices. Truth be said, their skins are different, the ZenFone 6 comes with Zen UI 6, while the Redmi K20 Pro includes MIUI 10, but both of those skins are quite capable.

ASUS debloated Zen UI in version 6, which is a great move by the company, as it is much closer to stock Android now. MIUI 10 is not exactly close to stock Android, but it works great, it’s fast and reliable, much better than it was in the past, while it also nailed some design choices.

Occasional stutters may occur, but most of you won’t even notice those, as these two phones are extremely fast, and their software is well-optimized, for the most part. Truth be said, they’re too similar in terms of performance for us to select either one of them.

Both of these phones can handle heavy usage without a problem, and chances are that you will not be required to charge them before the end of the day, unless you’re a really, really heavy user who does tons of gaming during the day, or something of the sort. The ASUS ZenFone 6 does have a slight advantage, though, the sheer size of its battery makes it possible for the device to last a bit longer than the Redmi K20 Pro.

So, what’s the situation in the camera department, you may wonder. Well, truth be said, neither of these two phones is at the very top of the food chain when it comes to camera quality, but they both offer really good camera experience.

In daylight, you’ll be able to get really solid shots out of both of these phones, with solid dynamic range, colors, white balance, and so on. When the light goes away, however, both devices run into issues. They are capable of providing good images, but not great ones, as they both pick up some noise, and detail levels are not that high either in such situations.

The ZenFone 6 does win in the selfie game, though, as it uses its main sensors as its selfie cameras, so it is capable of providing much better selfies. The ZenFone 6’s camera has some additional cool features due to its motorized, rotating camera, you can use this phone to shoot panorama images automatically, the phone will do all the job for you.

Both devices are really good in the camera department, but not great, and truth be said, they do seem to be on the same level in this regard.

Most of you will be glad to hear that both of these phones feature a 3.5mm headphone jack, though only the ASUS ZenFone 6 includes a set of stereo speakers. The ASUS ZenFone 6 also comes with DTS Headphone X support, unlike the Redmi K20 Pro.

Both phones are capable of producing 24-bit/192kHz audio, but the ASUS ZenFone 6 is a step ahead in this regard. The phone can provide you with better-balanced, and richer audio when the headphones are plugged in.

If you’re listening to audio using loudspeakers, well, the ZenFone 6 has an advantage in this regard as well, as the Redmi K20 Pro’s single speaker cannot match the ZenFone 6’s stereo setup. The ZenFone 6 produces louder output, but also richer sound at the same time.

Both devices won two categories, and two of them ended up in a tie, so it’s only fair not to select one phone as the winner here. It all depends on what you’re looking for in a device. If you need better audio and better battery life, the ZenFone 6 is the phone for you. If, on the other hand, you value design and display more, the Redmi K20 Pro is the better choice, in our opinion.

One thing is for sure, though, both of these phones are great, especially considering their price tags. You cannot go wrong no matter which of the two you end up purchasing.