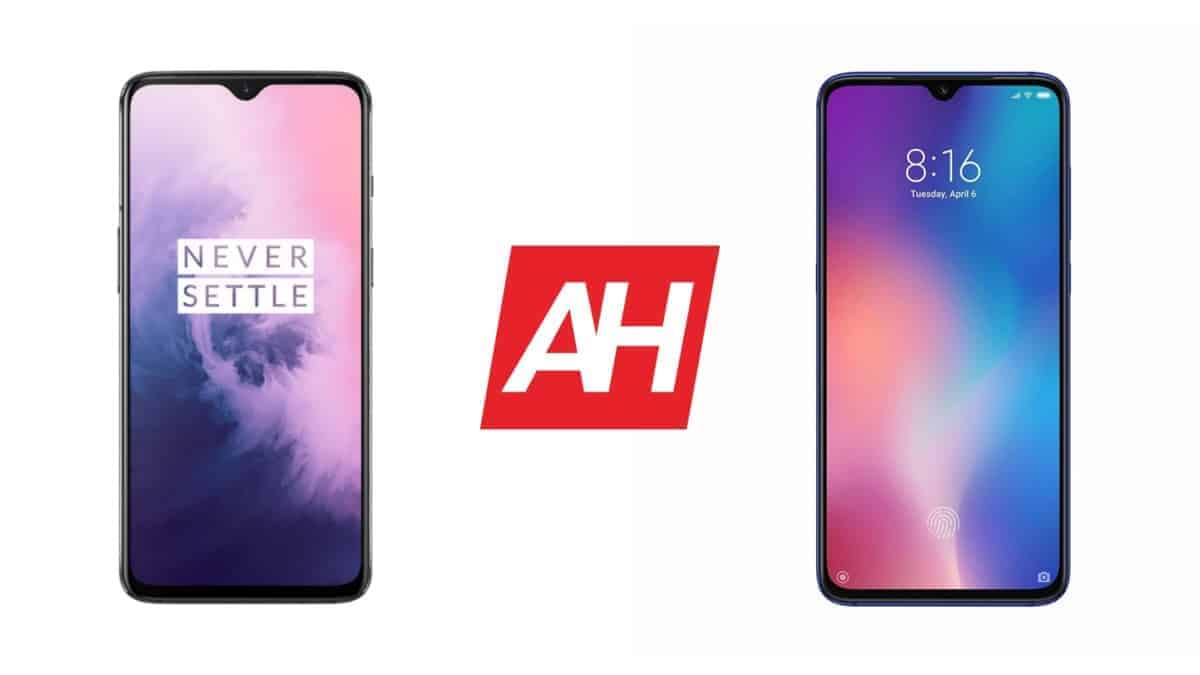 There are many other reasons why the OnePlus 7 is more similar to the Xiaomi Mi 9, than the OnePlus 7 Pro is, so it makes sense to compare these two phones. As per usual, we'll go over a number of categories, and see which of the two phones comes out on top. 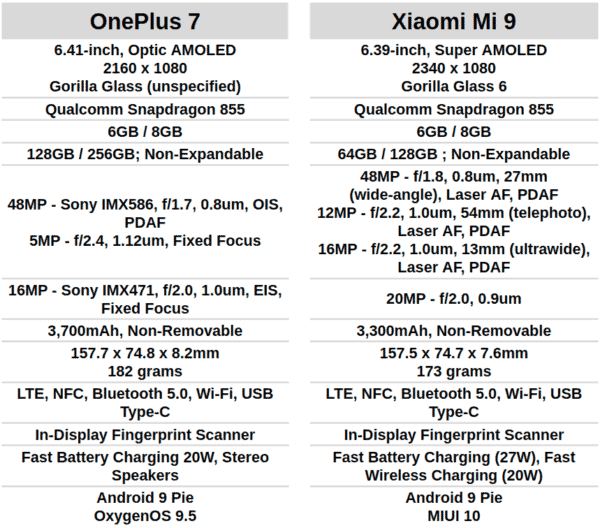 The OnePlus 7 and Xiaomi MI 9 are somewhat similar as far as the design is concerned. Both devices feature flat displays, and tiny display notches, not to mention that their bezels are extremely thin, and that a "chin" is present on both phones.

Both devices also offer curved back sides, and rounded display corners, while their rear-facing cameras are vertically-aligned. The position of rear-facing cameras on these two phones is a bit different, though, while the Xiaomi Mi 9 packs in one extra camera on the back, as it has three compared to the OnePlus 7's two rear-facing units.

Both phones are made out of metal and glass, and both are quite slippery. The two phones are almost equally tall and wide, though the OnePlus 7 is a bit thicker than the Xiaomi Mi 9, while it's also a bit heavier as well at 182 grams, compared to the Xiaomi Mi 9's 173 grams.

Both devices utilize in-display fingerprint scanners, optical ones, and that's why a regular fingerprint scanner is not visible anywhere on their body. These two phones are simply too similar in terms of the design for us to choose one of them, this category is a tie, definitely.

This is another section that the two phones are fairly similar in. Both of these phones feature fullHD+ OLED panels, the OnePlus 7 includes a 6.41-inch fullHD Optic AMOLED display, while the Xiaomi Mi 9 features a 6.39-inch fullHD+ Super AMOLED unit.

Displays of both of these devices are protected by the Corning Gorilla Glass 6, and both offer 19.5:9 display aspect ratios. The Xiaomi Mi 9's panel is HDR10 compatible, which is something the OnePlus 7's display does not offer.

In terms of general performance, well, both displays are really, really good, amongst the best fullHD+ OLED panels in the market. Both displays offer those nice, deep blacks, while they also offer great viewing angles, and are more than sharp enough. These two displays are quite similar in terms of output, and this is also a category in which we'll call it a tie.

Having said that, their software is considerably different, the OnePlus 7 ships with OxygenOS 9.5, while the Xiaomi Mi 9 includes MIUI 10. Software preferences differ from one person to the other, but OxygenOS on the OnePlus 7 does offer more consistent, and generally smoother performance.

MIUI has come a long way over the years, and it doesn't trail that much behind OxygenOS and the very best out there, but the OnePlus 7 does have an edge in this department, mainly due to software optimizations which impact the device's performance quite a bit. The Xiaomi Mi 9 is not far behind, though, not at all.

These two phones have almost the same display sizes, and have the same display resolutions, not to mention the same processors, but… their battery sizes are not the same, not even close. The OnePlus 7 includes a 3,700mAh battery, while the Xiaomi Mi 9 features a 3,300mAh unit.

Battery size, on its own, doesn't really have to mean much, as other hardware components plus software optimizations play a huge role in overall battery life… in this case, though, battery size itself is a good indicator of battery life.

The OnePlus 7 can provide you with truly great battery life, depending on your usage, you may be able to go over 6 hours of screen on time on a regular basis, which is not the case with the Xiaomi Mi 9. The Xiaomi Mi 9's battery life is not bad, but it's not great either, as heavy users will probably need to top up before the end of the day.

In normal light, both of these phones are pretty great, they are able to capture well-balanced images with plenty of detail and great colors. The Xiaomi Mi 9 does offer more versatility, though, thanks to its ultrawide and telephoto units.

When the light goes away, however, these two phones do show that they're not the best around, but they've both been immensely improved since launch, and are really good in low light. Both devices are capable of letting a lot of light enter an image, and they do balance images pretty well, and keep noise in check. You will also find more than enough detail in such shots, especially if you opt to use respective camera night modes.

Both smartphones offer really good cameras, and they can take really good shots in both regular, and low light… produce similarly good images, so this category ends without a clear winner.

Out of these two phones, only the OnePlus 7 offers stereo speakers, which is a solid advantage from the get-go. Truth be said, the Xiaomi Mi 9's single speaker is really good, it's clear, and it's loud enough, but it cannot compete with a stereo setup.

The OnePlus 7 also offers Dolby Atmos sound, which is something you will not find in the Xiaomi Mi 9. Neither of the two devices have a 3.5mm headphone jack, and the OnePlus 7 is able to provide a bit better audio via headphones, even though they're almost on par in this regard.

Both phones do look really nice, and offer a lot of value for the asking price. Both devices are considerably more affordable than the competition from Samsung, Apple, and Huawei, and are definitely worth considering.