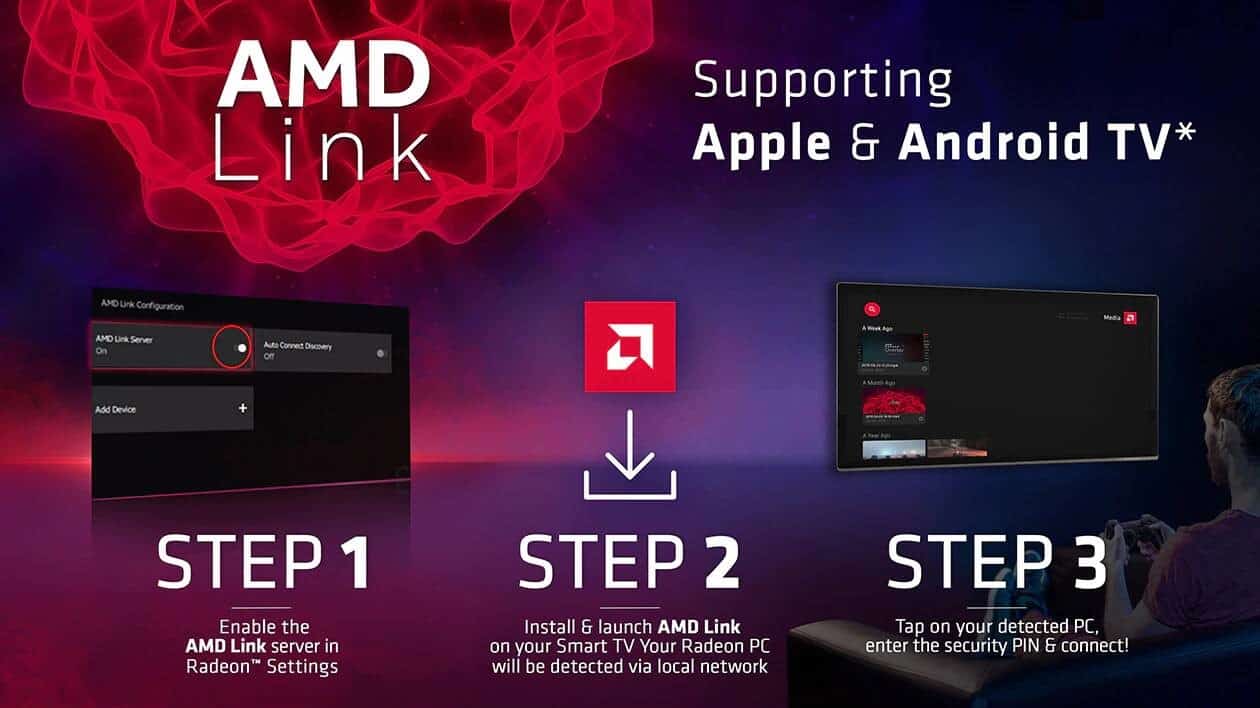 The world of gaming is an ever-changing one and what seems to be all the rage right now is game streaming, cloud gaming, or some combination of the two. When it comes to streaming games so you can play them on numerous devices the most recent one that comes to mind is likely Stadia, Google's ambitious endeavor to make it possible to play high-quality games at high-quality settings from smartphones, tablets, and televisions.

Stadia isn't the only option though if you're looking into ways to stream games to your TV. Steam offers an option through its Steam Link app, and AMD is offering you an option too, with AMD Link, an app specifically focused on affording those with computers powered by an AMD Radeon processor to stream games from their PC to their TV through the use of the smartphone application that can be installed.

AMD Link will support both Android and iOS so you can find the app on the Play Store or App Store, and it naturally supports both Android TV and Apple TV as counterparts to the applications. While the app can certainly applied to multiple uses, gaming is very much at the center of AMD's newly created tool and it's not shy about making that an apparent detail.

The app boasts more than just streaming games to your TV though. It's also capable of allowing you to play games on your smartphone or tablet and standalone VR headsets, which means you can play your PC games just about anywhere.

Though this isn't a competitor for Stadia in the traditional sense it's hard not to draw on comparisons. Both options allow for playing games on the go or at home, the main difference being that with AMD Link you have to already have a PC, and on top of that it has to be powered by an AMD Radeon processor. The FAQ does note that you don't need a Radeon graphics card to install the app, but it shouldn't be overlooked that it also mentions the game streaming feature will not work if you don't have this card, making this purely a news feed app without it.

As far as other requirements go, AMD Link will need to be installed on Android smartphones that are on Android 5 or later, or iPhones that are on iOS 10 or later, and you will need the most up to date version of AMD's Radeon Software Adrenaline Edition 2019 installed on your PC which is 19.7.1. This is only if you want access to the auto discovery feature though, otherwise you can get by with the 19.5.1 version of the software and still use all the other features.

The app itself offers digital controls if you don't want to break out any extra hardware, but it will support connection of external controllers if you like the feel of a physical controller better, all you will need to do is connect that controller to your phone and then you can being playing. This process is the same for iOS users though the controller will need to be MFI-certified according to AMD.

AMD Link is most closely related to Steam Link if you look at what it's capable of doing for the user and what it actually offers, though it is bound to have some features that Steam Link does not and vise versa. If you've thought about grabbing Stadia as a means to play high-quality games on the go, but already have an AMD Radeon-powered PC for playing games at home, you might want to consider this option instead, as it's free, for one, and it simply might work better for what you're aiming to get out of it.