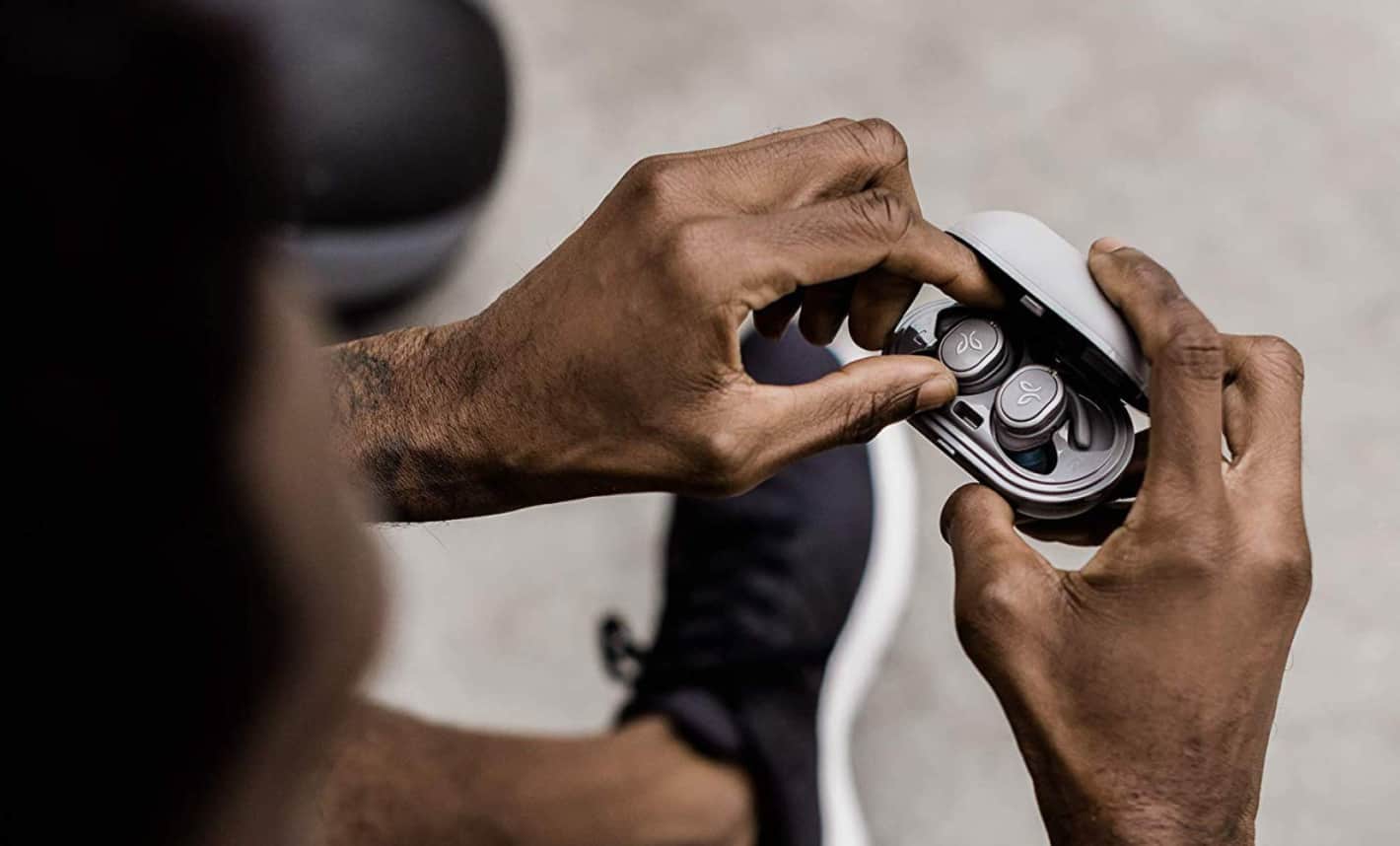 Truly wireless headphones have become a pretty big deal in the last couple of years. Many headphone companies are going this route and offering up better and better options each year. Companies like Jaybird, Bose, Sony, Jabra, Beats and Apple are all throwing their hats into the mix here. But which pair of truly wireless headphones are truly the best pair to pick up?

The Jabra Elite Active 65t are one of the few pairs of truly wireless headphones that has Alexa built-in. Allowing you to talk to Alexa through your earbuds, asking her for the weather, to change your music and much more. These are also “active” and made for working out and sweating. Making them great to take to the gym.

Jabra may not be a big name in the music industry like Bose or Sony, but its headphones do provide some rather impressive audio quality. The bass is pretty deep, without affecting the mids and highs. You definitely won’t be disappointed by the audio coming out of the Jabra Elite Active 65t.

Like many of the others on this list, these provide around five hours of continuous playback, the charging case can give you 15 hours (basically three full recharges). Jabra also included an integrated motion sensor, so you can keep track of your workout.

The Jabra Elite Active 65t are priced at $189 normally, though right now you can find them for $180 over at Amazon by hitting the link below.

Anker’s sub-division, Soundcore, has come out with a new pair of truly wireless earbuds. They do look a like Apple’s AirPods, but that shouldn’t be why you do or don’t buy them. The reason why we are recommending these over the Liberty Lite is that those were first-generation truly wireless headphones, and these are newer with better tech inside.

Liberty Air does support Bluetooth 5, so it can be paired with multiple devices at the same time. It also provides a better connection versus Bluetooth 4 (which the majority on this list support). Battery life on the Liberty Air is about what you’d expect, around five hours of continuous playback. But the carrying case does give you around 20 hours – about four recharges. Which is more than the others on this list.

The Anker Soundcore Liberty Air are a great pair of truly wireless headphones that you can get for just $79.99 right now, in black or white, from Amazon using the link below.

One of the things you’ll notice on this list is the fact that most earbuds have a pretty strange name, like it was chosen from Alphabet Soup. Sony’s SP700N is no different here.

For most, the SP700N are the best truly wireless headphones on the market and it’s not hard to see why. These are very comfortable headphones, even though they do hang out of your ear a bit, the ear hooks do a good job at keeping them in your ears.

Sony has also outfitted the SP700N with its Extra Bass technology. Giving you some rather impressive lows out of such a small earbud. Sony also has noise cancellation and ambient sound included. That makes these great for taking to the gym, as you can drown out the sound around you and get your workout done. Not to mention, these are also sweatproof.

When it comes to battery life, these are rated at around four hours of continuous playback. Though you can extend that by turning off noise cancellation. The included carrying case will get you about two to three full charges.

The Sony WF-SP700N are also some of the cheapest on this list at $148, and you can grab them from Amazon using the link below.

The Powerbeats Pro are some of the more expensive models on this list. These are also larger headphones than most of the others. This means that there’s more space for battery and also more space for audio drivers, which is a nice thing.

These do provide some really good sounding audio. Of course, this is Beats, so expect to get a ton of bass out of these headphones. If you’re good with that, then these are probably going to be some really good options for you.

Powerbeats Pro also offer the best battery life we’ve seen in a pair of truly wireless headphones. About nine hours on a charge. The included carrying case will give you around 24 hours of charging. Which is pretty impressive, and should get you through those extended workouts, if needed.

You can pick up the Powerbeats Pro from Amazon using the link below, they are currently priced at $249.

The Samsung Galaxy Buds are a really good choice if you have a Samsung smartphone. The reason for that is because they work better with Samsung smartphones than other Android smartphones. For one, as soon as you open the case, they will start pairing with your smartphone. No fiddling with Bluetooth settings needed. Which is a really great feature to have.

The Galaxy Buds are pretty small, so the battery life isn’t as great as the Powerbeats Pro, but that also means that you can hide them a bit easier than a pair of PowerBeats Pro, which is a good thing for a lot of people. Samsung also offers this in a couple of different colors, so you can choose the pair that fits your style the best.

You can pick up the Samsung Galaxy Buds from Amazon using the link below. They are currently on sale for $127.99, which is a couple of bucks off of their regular price.

The Bose SoundSport Free are a great pair of truly wireless headphones if you really like Bose’ sound signature. It’s not for everyone, and in fact a good number of audiophiles do not like their sound signature. So if you don’t, then these aren’t for you.

These headphones are a bit thicker, so they do feel like they are falling out of your ears, but they never will. And that’s a fantastic thing. These do not have that great of battery life though, we’re looking at barely three hours on a charge. But that’s par the course when it comes to truly wireless headphones, unfortunately.

If you are a runner, the Jaybird RUN XT are the truly wireless headphones to buy. These were designed by Jaybird in conjunction with runners, to make sure they are headphones that won’t fall out while you’re running and exercising and to make sure the audio sounds good. So you aren’t getting wind noise in with these headphones. Both of which are important.

These are also some really lightweight headphones, so that you’ll probably forget that they are even in your ears. Which is a good thing at times. Battery life is pretty decent, coming in at around four hours on a charge. That’s pretty much the industry standard at this point.

Jaybird does also have a companion app for the RUN XT. This will allow you to adjust the EQ to your liking, and you can even check out some other runners’ Spotify playlists on the app, so you can switch up your music. You can also use other runner’s EQ settings, in case you can’t find one that is perfect for you.

You can pick up the Jaybird RUN XT True Wireless Headphones from Amazon using the link below. These are currently priced at $179.99.

Unfortunately, the battery life on truly wireless headphones are still not that great. This is because they are much smaller, and also have that other connection to the other ear. So getting something around four to five hours is pretty good. But nine hours like the Powerbeats Pro, is pretty incredible. Though it’s also unfortunate that some companies skew the battery life numbers by stating that they last over 24 hours on a charge with the carrying case.

All of the headphones on this list are great options. Whether you are looking for something that won’t break the bank, or you just want the best of the best, with a ton of bass. There’s something here for everyone.