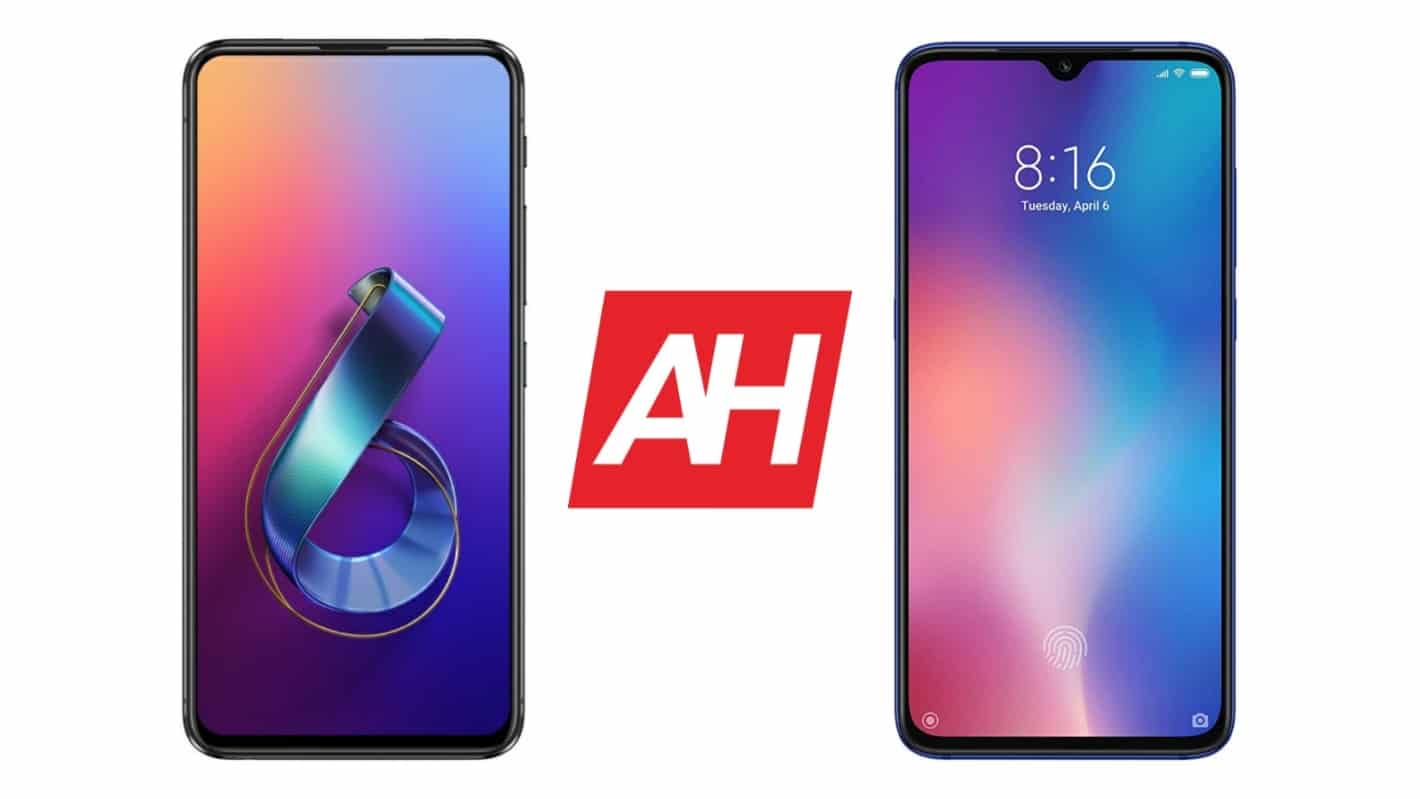 Many of you are probably looking for a flagship-grade smartphone, but don't want to spend a ton of money along the way. Well, the ASUS ZenFone 6 and Xiaomi Mi 9 are both smartphones that you should consider, if that is the case.

These two phones are the very best ASUS and Xiaomi have to offer at the moment, and both of these phones cost less than €499 at the moment. They're both available in Europe and some other markets, while the ZenFone 6 will be coming to the US soon as well.

The ASUS ZenFone 6 starts at €499, while the most affordable variant of the Xiaomi Mi 9 can be purchased for €450. The ZenFone 6 will probably cost around $499 once it reaches the States. That being said, let's compare these two phones, and see which one offers more for the money.

Both of these phones are made out of metal and glass, and both feature a curved back, on the sides. The Mi 9 even comes with curved at the top and bottom of its back, which actually makes it really nice to hold, in terms of feel, but the phone is extremely slippery, even slippier than the ZenFone 6, mainly due to those curves.

Both devices include a "chin" below the display, and both feature really thin bezels. The Mi 9's bezels are a bit thinner overall, but the Mi 9 includes a waterdrop display notch, unlike the ZenFone 6. The ZenFone 6 does not have any obstructions on the display, as the company included a flip-up camera on the phone, so it did not have to include selfie cameras on the front side of the device.

The ZenFone 6 does look more appealing from the front, as it doesn't have a notch, even though its bezels are a bit thicker. The back, however, is a completely different story. The ZenFone 6's camera setup on the back is not exactly eye-candy, and that fingerprint scanner, and writing on the back don't really look all that nice. The Mi 9 looks way better on the back, its three cameras are neatly organized in the top-left corner of the phone's back side, and the phone does not include a rear-facing fingerprint scanner, its back side looks much cleaner.

The Xiaomi Mi 9 is a bit narrower, shorter, and thinner than the ZenFone 6, despite the fact the two devices have an almost identical display size, and display aspect ratio. That difference is here mainly due to bezels, as the Mi 9's are a bit thinner. We don't really see a way to select a winner here, the Mi 9 has thinner bezels and looks better on the back, while the ZenFone 6 is notch-less and it looks more appealing from the front.

The Xiaomi Mi 9 does not have the best fullHD+ OLED display on the market, but it does look nice. Nice contrast, pure blacks, the whole package, while the ZenFone 6's panel is well-balanced, but it cannot compete, the Mi 9's simply looks better to the eye.

Both of these phones are great performers, it's difficult to deny that. Both devices are fueled by the Snapdragon 855, they both come with Android 9 Pie out of the box, and have plenty of RAM, on top of that.

The two devices do come with different Android overlays, though. The ZenFone 6 packs ASUS' ZenUI 6, which is much improved compared to previous iterations, as it's much closer to stock Android. ZenUI 6 does include some of ASUS' additions, but very few, and it's well-optimized.

Xiaomi's MIUI has come a long way over the year, and MIUI 10 works great on the Xiaomi Mi 9. It's fast, responsive, and in terms of sheer performance, there's not many complains that we can list here. Both skins do tend to stutter from time to time, for a brief moment, and truth be said, we do think that the two phones are on an even playing field in terms of performance, at this point in time at least.

The ASUS ZenFone 6 has a much larger battery than the Mi 9, as it comes with a 5,000mAh unit, compared to the Mi 9's 3,300mAh battery. Can you feel that in terms of battery life? The answer is yes, absolutely.

The Xiaomi Mi 9's battery life isn't bad, not exactly. The phone can provide you with a solid day's use, presuming you're not a power user, but if you do aim to push it a bit harder, you will need to charge it before the day ends.

The ZenFone 6 can offer you much more in this regard, mainly due to the sheer size of that battery, though ASUS' optimizations probably have something to do with that as well. This phone is actually ideal for power users in this regard, as you will really need to push it above and beyond to kill the battery before the day is over.

Both of these phones come with a 48-megapixel main camera, and that's the same sensor we're looking at, Sony's IMX586 sensor. Both phones are capable of taking really great pictures in the right conditions, even though the Mi 9 has an advantage in terms of dynamic range, and pictures look more balanced from its camera in such conditions.

If you're into selfies, the ZenFone 6 is the better choice without a doubt. The phone uses its main cameras as front-facing ones, and that alone is enough to eclipse the Xiaomi Mi 9. You can take some really great-looking selfies with the ZenFone 6. Overall, though, we'll go with the Mi 9 in this category, as it has an edge in terms of taking pictures in pretty much all conditions.

If you're interested to know more about audio, well, the ZenFone 6 is the better option. The device comes with stereo speakers, which are not the best we've seen, but they're more than good enough, and are way better than what the Mi 9 has to offer.

The Xiaomi Mi 9 comes with a single, down-firing speaker which is simply not loud enough. On top of that, the ZenFone 6 includes a 3.5mm headphone jack, unlike the Mi 9, and it also comes with DTS Headphone X sound. The ZenFone 6 is a better option in terms of audio, no doubt.

So, all things considered, we do see these two phones as equals. The ZenFone 6 wins in the battery life and audio departments, while the Mi 9 offers a better display and a better camera experience. Both of these phones are great choices, it only depends on what you prefer.