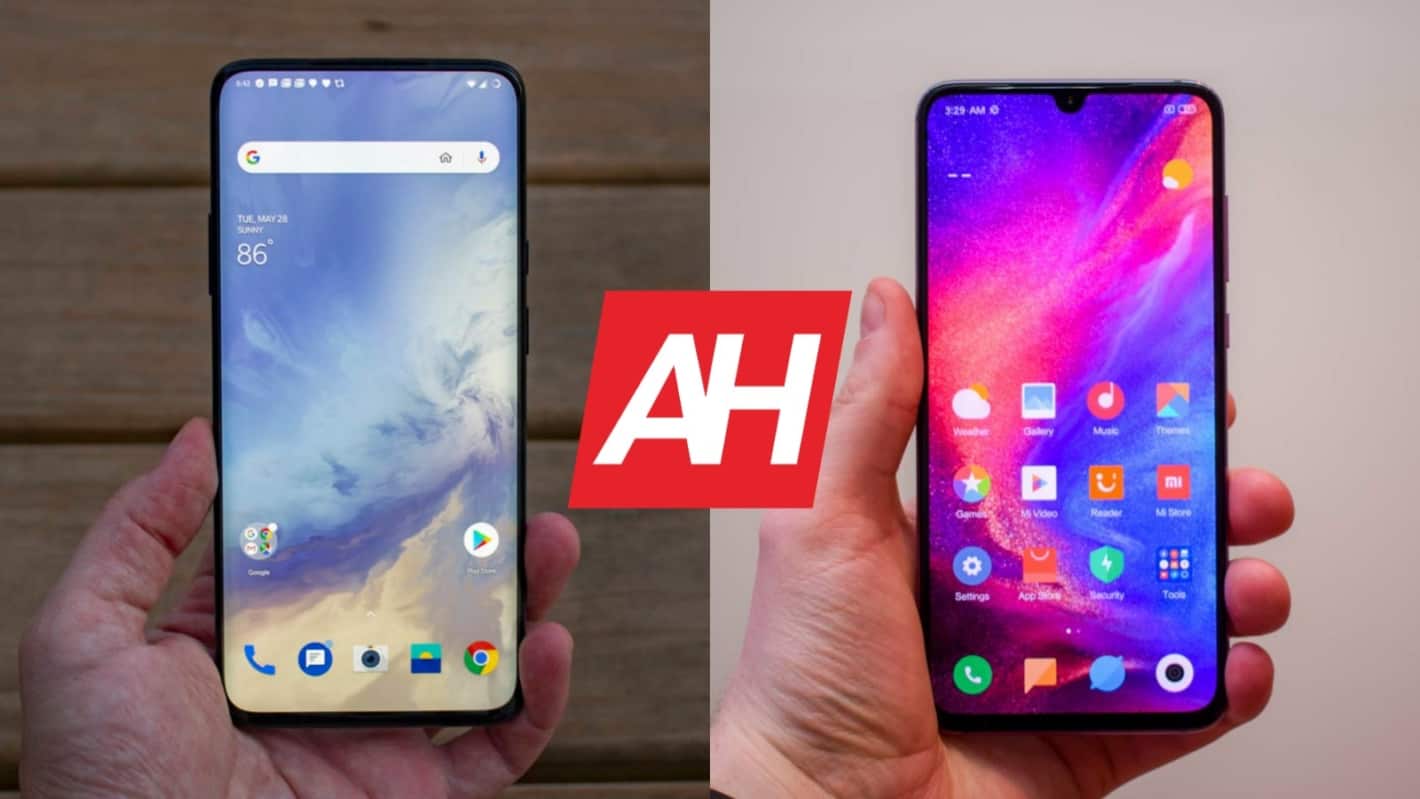 The Xiaomi Mi 9 is a considerably more affordable smartphone here, and it's important for you to note that before we get down to comparing the two phones. The OnePlus 7 is much closer to the Xiaomi Mi 9's price tag than the OnePlus 7 Pro, but we're here to compare the very best of two companies first, so that's exactly what we'll do.

As is usually the case with our comparisons, we will kick things off by listing specifications of these two smartphones, and then compare the two phones through a number of categories including design, display, performance, and so on.

Both of these phones are made out of metal and glass, and both of them are extremely slippery. The Xiaomi Mi 9 is a bit easier to handle in one hand, but only because it's a bit smaller, and it doesn't have a curved display, like the OnePlus 7 Pro.

Both phones sport a curved back, and both include a thin "chin" below the display. That's pretty much where the similarities end, as the Xiaomi Mi 9 has a waterdrop notch on its display, while the OnePlus 7 Pro does not include a notch of any kind, and the same goes for a display camera hole.

OnePlus opted to include a pop-up camera in this smartphone, instead of messing up with the screen real estate, and it seems like many people appreciate that. Both devices include rounded display corners.

They're both sleek-looking devices, that's hard to deny, but the OnePlus 7 Pro is a step above the Mi 9, mainly because it does not have a notch or anything of the sort, and that curved display may not be practical, but it sure makes the phone look extra premium.

OnePlus opted to release a flagship with a QHD+ display this time around, and the OnePlus 7 Pro is the first smartphone from the company to include a QHD+ panel. That display is actually really good, and the Mi 9's fullHD+ panel is not on the same level.

The Xiaomi MI 9's display, on the other hand, is HDR10 certified. The OnePlus 7 Pro's display comes with Gorilla Glass 5 protection, while Xiaomi included Gorilla Glass 6 on top of the Mi 9's panel.

Both of these displays are quite good, they both offer great viewing angles, and most users really won't appreciate the higher resolution and everything else the OnePlus 7 Pro's panel brings. Still, it is the better of the two in pretty much every way, it's sharper, the colors look better, and it's simply a joy to use.

The Xiaomi Mi 9's panel is really good as well, it's plenty sharp, and it offers really nice colors and those deep black that OLED displays are well-known for. Still, the OnePlus 7 Pro is the winner here, no doubt.

The OnePlus 7 Pro is often referred to as the fastest phone in the market, and there's a good reason why that is. OnePlus' OxygenOS skin is really well-optimized, and in combination with the Snapdragon 855, a ton of RAM, and a 90Hz display refresh rate, this phone is really a screamer when it comes to performance.

The Xiaomi Mi 9 is not far behind, though, the device feels extremely fast, and the company's MIUI 10 skin is actually really good on this phone. The Mi 9 is also fueled by the Snapdragon 855, and it comes with 6GB or 8GB of RAM.

Both phones can handle pretty much anything you throw at them, including 3D heavy games, but the OnePlus 7 Pro simply feels a step ahead in terms of sheer performance. You will notice this best in day-to-day use, as it's silky smooth… but the Mi 9 is also a great option in this regard, and it would probably win this category in comparison with the vast majority of other flagships.

The OnePlus 7 Pro comes with a 4,000mAh battery on the inside, while the Xiaomi Mi 9 includes a 3,300mAh unit. The Xiaomi Mi 9's display is a bit smaller than the OnePlus 7 Pro's, and it comes with a lower resolution, but many people considered that battery to be a bit on the smaller side for the device. Thankfully, that's not the case, as the Mi 9 offers solid battery life.

The OnePlus 7 Pro and Xiaomi Mi 9 actually use the same main sensor on the back, Sony's IMX598 sensor. That means that both phones have a 48-megapixel main camera, plus both include telephoto and ultrawide cameras on the back.

In terms of camera quality, well, they're both extremely good at taking pictures when there's plenty of light around. Dynamic range is really good, colors are on point, and there's plenty of detail that you can work with.

When the light goes away, however, the OnePlus 7 Pro pulls ahead, especially if you've installed all the available updates thus far, as the camera has been improved quite a bit. Xiaomi also improved the Mi 9's shooter, but the changes are not as noticeable as on the OnePlus 7 Pro.

The OnePlus 7 Pro's Nightscape mode for low light photography has been vastly improved with updates, and it not only allows more light to come into a shot now, but it balances images much better. The Xiaomi Mi 9 is not bad in low, not at all, but it's not on the OnePlus 7 Pro's level in this regard.

Quality of the front-facing camera shots is similar on these two phones, there's not much to say here. Selfies don't turn out great, but they're really good in both cases. Both devices are capable of shooting QHD video at 60fps, though they both shine if you opt for a fullHD video instead. The OnePlus 7 Pro will take this category because of a better low light mode and results, but other than that, the two phones are quite similar in terms of camera quality.

Neither of these two smartphones offer a 3.5mm headphone jack, which is a shame, but the OnePlus 7 Pro does come with stereo speakers, which is not something the Xiaomi Mi 9 can say for itself.

The Xiaomi Mi 9's bottom-firing speaker is okay, but not great. The OnePlus 7 Pro's stereo sound is really, really good, though. The phone support Dolby Atmos sound, and if you have the appropriate content to play on the device, the output is even better.

The OnePlus 7 Pro also offers a bit more balanced sound when you plug in your headphones, though it's not miles ahead of the Mi 9 in this regard, at all, as they're both really good in the headphones mode.

So, is the OnePlus 7 Pro worth spending the extra money? Well, it does have an upper hand in pretty much every category we talked about, but truth be said, you can't go wrong with the Mi 9 either.

If you do want a better phone, with all the bells and whistles, and you don't mind the fact the OnePlus 7 Pro is truly a huge phone, or that it has a curved display… well, go for it, it's a great option, that's for sure, and a winner of this comparison.