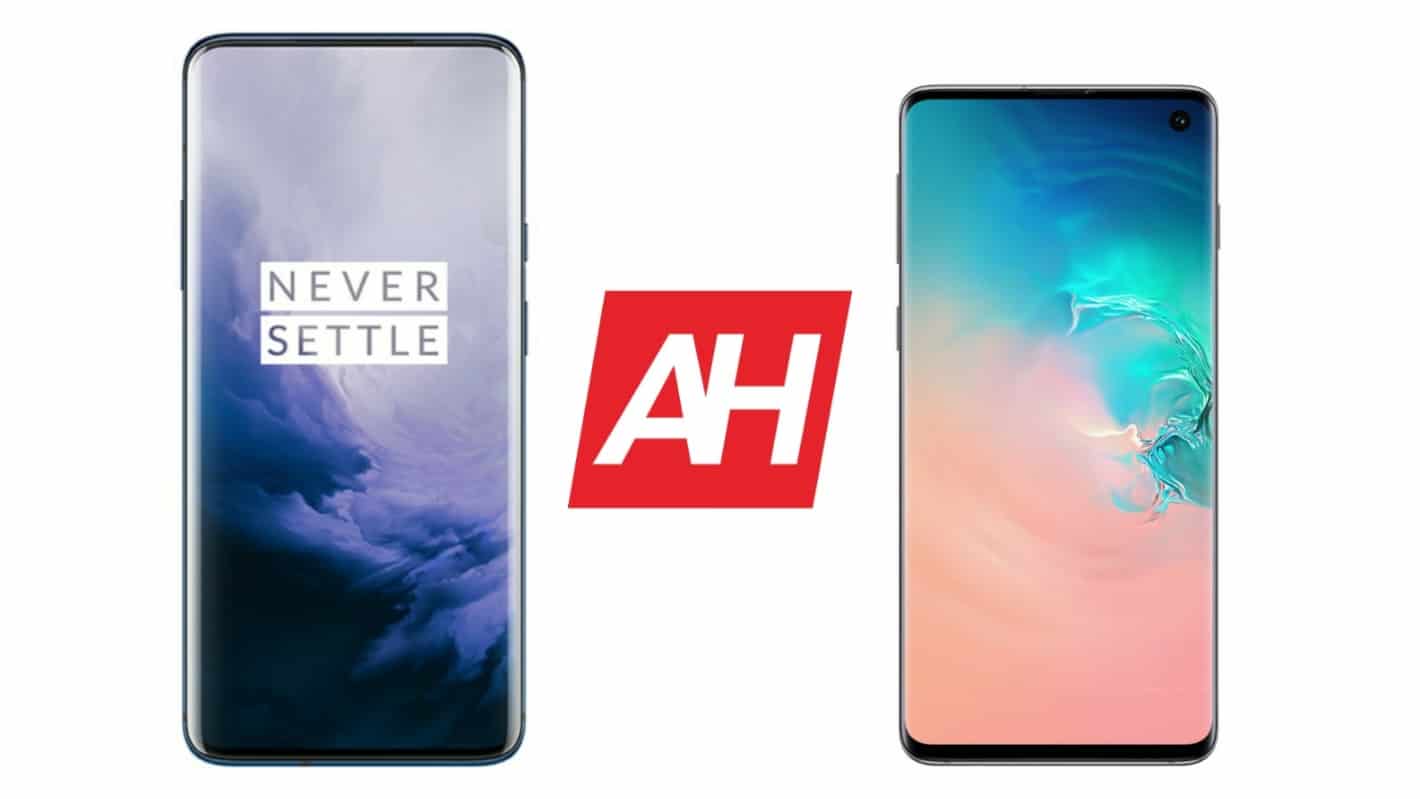 We've compared the OnePlus 7 Pro and the Galaxy S10+ last month, and it's now time to take a look at how OnePlus' new flagship stacks up against the regular Galaxy S10 variant. The Galaxy S10 and Galaxy S10+ have a lot of things in common, but they're not exactly identical, not even close to it.

We'll try to help you make a decision via this comparison, make a decision on which of the two phones to buy. They sure are great phones, both of them, but there are quite a few differences to consider here.

Both devices offer extremely thin bezels otherwise, including "chins" below the display. The back sides of these two devices look considerably different in comparison, though. The OnePlus 7 Pro features a vertical triple camera setup, while the Galaxy S10 sports three horizontally-aligned cameras.

Truth be said, the OnePlus 7 Pro's back side looks a bit more appealing as the heartrate sensor is not there, and the design of the whole camera setup looks more appealing to the eye. It is also worth noting that both devices offer rounded corners, and that the OnePlus 7 Pro is considerably heavier than the Galaxy S10 (206 grams vs 157 grams).

The Galaxy S10 does look a bit more appealing than the Galaxy S10+, as it has a smaller display hole, but the OnePlus 7 Pro's design is much cleaner, and the phone does not include any obstructions in terms of display holes or notches… so, we'll go with the OnePlus 7 Pro in this category, as we're not that worried about the pop-up camera, but if that is something that worries you, the Galaxy S10 is a great-looking phone as well.

The OnePlus 7 Pro and Samsung Galaxy S10 both have truly great displays. Both of these displays have been manufactured by Samsung, and both are QHD+ panels, though there are some differences here.

Both of these displays are HDR10+ certified, though the OnePlus 7 Pro's display has one advantage over the Galaxy S10, a 90Hz refresh rate. The Galaxy S10 offers a regular 60Hz refresh rate, and that is noticeable when you are using the phone, especially while gaming, though not all games are supported.

In all honesty, we could not decide on which panel to choose here, the Galaxy S10 essentially has the same display as the Galaxy S10+, but smaller, and it's just as great as the OnePlus 7 Pro's panel, at least. Both displays have extremely vibrant colors, are really sharp, and the blacks are truly black… they both just look great.

The OnePlus 7 Pro does have that high refresh rate, though, so if that's what you're after, then get the OnePlus 7 Pro. If you, however, want a bit smaller device with a truly great display, quite probably the greatest at that size, get the Galaxy S10.

Both of these phones are flagship offerings, so it's not surprising that they have top of the line specifications. They both come with the Snapdragon 855 64-bit octa-core processor (though the Galaxy S10 also comes in the Exynos 9820 variant), plenty of RAM, and Android 9 Pie out of the box.

The OnePlus 7 Pro does include OnePlus' OxygenOS Android overlay, while the Galaxy S10 ships with One UI. Samsung has improved its Android skin a lot over the years, and it's more than a compelling choice at the moment, but it still cannot measure up to OxygenOS in terms of sheer performance.

OxygenOS is a cleaner build of Android, without some proprietary services than One UI includes, like Bixby, KNOX, and so on. In real life, they both perform great, but OxygenOS does have an edge in sheer speed, as One UI is more prone to a stunner once in a while.

On top of that, if you opt to use the 90Hz refresh rate on the OnePlus 7 Pro's display, the phone will feel even smoother. In conclusion, they are both truly great performers, but the OnePlus 7 Pro is a step ahead of the Galaxy S10 in this regard.

Now, it is worth noting that the Galaxy S10 ships with fullHD+ resolution by default, while the OnePlus 7 Pro has 90Hz refresh rate enabled out of the box (and a variable display resolution). If you tune that up all to the max, neither of the two phones will provide stellar battery life, though the OnePlus 7 Pro will still have an edge.

If you set the OnePlus 7 Pro's display refresh rate to 60Hz, the difference in battery life will be even more apparent, as the OnePlus 7 Pro will be in a considerable lead, at least based on what we've witnessed.

As far as charging is concerned, the OnePlus 7 Pro offers much faster charging than the Galaxy S10, as it comes with 30W Warp Charge, while the Galaxy S10 offers 15W Quick Charge 2.0 charging. We're talking about wired charging here, of course.

The OnePlus 7 Pro will take this category, as the device can offer you more juice during the day, while it also offers considerably faster charging than the Galaxy S10, even though it comes without support for wireless charging.

Camera quality has always been a sore spot for OnePlus, and when the OnePlus 7 Pro arrived, it had its fair share of camera issues. The company managed to improve its camera quite a bit with updates since the launch, but that only applies for the global variant of the phone, if you're on T-Mobile, you're out of luck.

The Galaxy S10 also received its update, and depending on where you live, you either have a dedicated camera mode (which arrived via an update), or you do not… as that update still did not arrive on specific models.

Let's assume that all updates are in place… if that's the case, then both devices can provide great-looking images in all conditions, pretty much, but the Galaxy S10 does have an edge here. When it comes to focusing while doing close-ups, the OnePlus 7 Pro still cannot compare to the Galaxy S10, as it does tend to blur out edges of a subject. That happens much less than it did before, but it's still here.

In low light, both phones can offer really bright, and well-balanced shots, if you use their dedicated camera modes. Truth be said, they can shoot nice images in auto mode as well, but if you're in really dark areas, opting for night modes is a must. They are quite comparable in this regard, though we'd give the Galaxy S10 a small advantage, at least as far as the main sensor is concerned.

The Galaxy S10's images are a bit more saturated than OnePlus 7 Pro's, which is something some people will appreciate. All in all, the OnePlus 7 Pro has come a long way, and its cameras are comparable to the Galaxy S10's, the same goes for the front-facing one as well, but the Galaxy S10 still has a slight edge.

One thing we did not touch upon in any of the categories above is audio. Both devices offer stereo speakers, while only the Galaxy S10 has a 3.5mm headphone jack. Dolby Atmos support is included on both phones, while the Galaxy S10 also offers AKG sound support.

Stereo speakers are great on both phones, they're really close in quality, though the Galaxy S10's do sound a bit fuller. When you plug your headphones in, you can get more quality out of the Galaxy S10, as it will provide you with a richer, more balanced sound, presuming your headphones are good enough, and the same goes for the content you're listening / watching.

All things considered, these two phones are quite close in quality, across the board. The OnePlus 7 Pro does have an edge in design, performance, and battery life, while the Galaxy S10 takes the cake in the audio and camera departments.

Displays on both phones are truly great, and it's only a matter of your personal preference whether you like larger, or smaller displays. You can't go wrong either way here, it all depends on what you want / need… but the overall winner is the OnePlus 7 Pro, by a slight margin.

Advertisement
Trusted By Millions
Independent, Expert Android News You Can Trust, Since 2010
Publishing More Android Than Anyone Else
36
Today
116
This Week
36
This Month
4025
This Year
105502
All Time
Advertisement