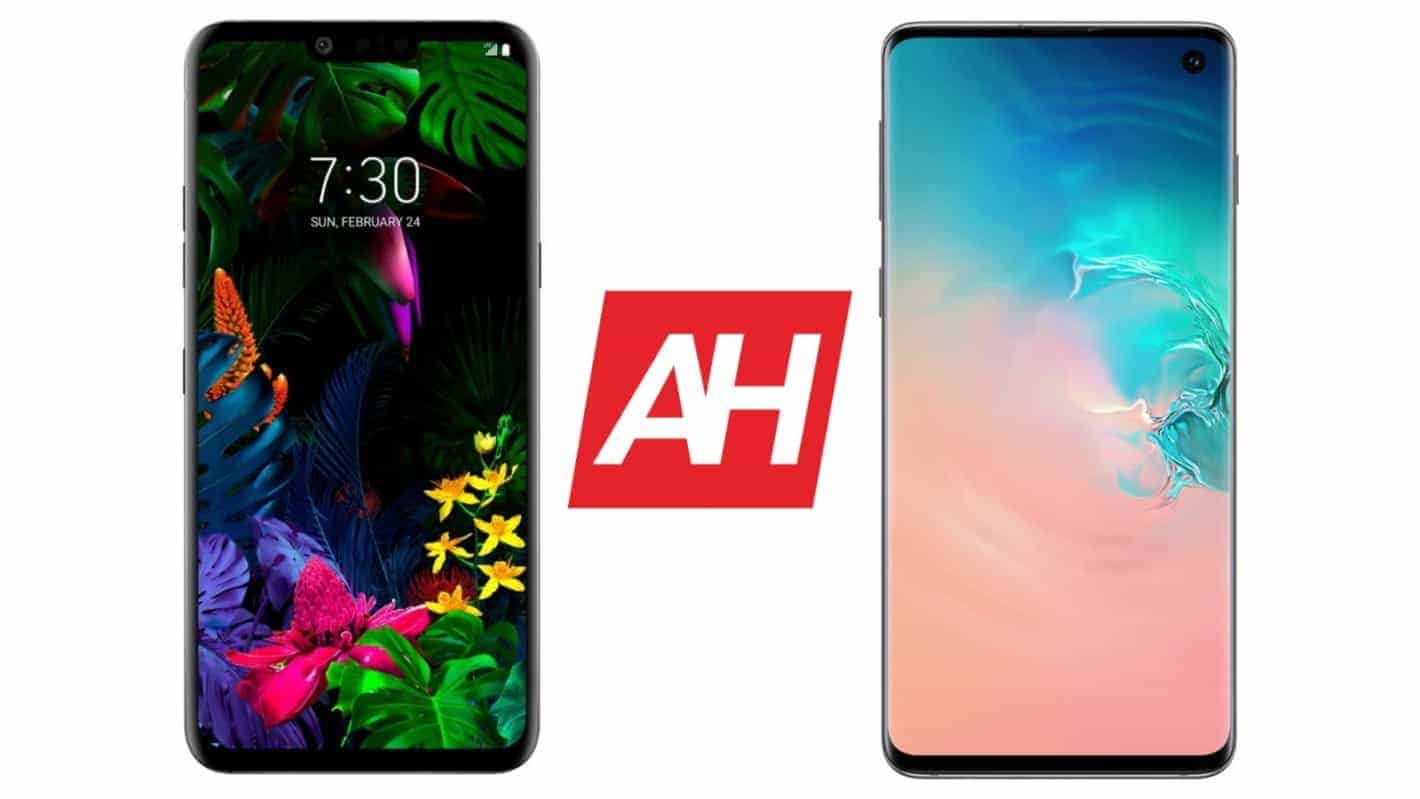 LG and Samsung have been competitors for a long time, though the difference between the two companies is quite considerable in today's smartphone market. Samsung is at the very top of the food chain, while LG managed to drop quite a bit over the years.

As is usually the case, we will start by comparing the specifications of the two devices, and work our way from there. The two phones will get compared across a number of categories, and we will hopefully be able to help you make a decision on which phone to purchase.

Both of these phones have a very thin "chin" below the display, and they are made out of metal and glass… but that's basically where similarities end. The LG G8 ThinQ includes a rather noticeable display notch, while it also comes with a capacitive fingerprint scanner which is located on the back.

The Galaxy S10 does not include a display notch, but it does ship with a display camera hole. That hole is included in the top-right corner of the display, and due to its sheer size, it's less noticeable and intrusive than a display notch.

The LG G8 ThinQ includes a flat display, while the Galaxy S10 sports a curved one. These two displays are the same in size, even though they do have a different aspect ratio. The Galaxy S10 is the smaller device of the two, in every measurement, while it is also lighter than the LG G8 ThinQ.

Both devices include a horizontal camera setup on the back, though the Galaxy S10 includes one camera more than the LG G8 ThinQ. Truth be said, the LG G8 ThinQ includes three cameras in some markets, but the unit we've tested (for the US), sports only two, so that's what we're basing this comparison on.

Both of these phones have really great displays. They sport OLED panels, though in the LG G8 ThinQ's case we're looking at a P-OLED panel, while the Galaxy S10 includes a Dynamic AMOLED displays.

The LG G8 ThinQ's display offers HDR10 compatibility, and also comes with Dolby Vision enhancements, while the Galaxy S10's unit is HDR10+ certified. Both displays are truly great, you cannot go wrong either way, but the Galaxy S10 is a bit better, at least to our eyes.

The Qualcomm Snapdragon 855 fuels both of these phones, though the Galaxy S10 also comes in the Exynos 9820 variant (Europe & India). Both devices ship with Android 9 Pie out of the box, though they include different Android overlays.

LG's very own LG UX 8.0 is included on the LG G8 ThinQ, while One UI ships with the Galaxy S10. Both of those Android skins are filled with software from LG and Samsung, but they do perform really well.

You do get a ton of features here, and at the moment, neither of the two skins affects the performance of these two devices. It remains to be seen what will happen after a year or so, but they both offer great performance.

It is worth noting that we noticed some stuttering when it comes to scrolling on the LG G8 ThinQ, but that's nothing major, and can be easily fixed. Also, the LG G8 ThinQ includes some gimmicky air gestures which don't really work as well as they should, so all in all, we'd give an edge to the Galaxy S10 when it comes to overall performance.

The LG G8 ThinQ comes with a 3,500mAh battery, while a 3,400mAh unit is included with the Galaxy S10. Battery size does necessarily mean that two phones have similar battery life, despite the fact their displays are the same size and similar resolution, but in this case, it does.

The word that comes to mind when describing battery life on these two phones is "good". Both of these phones will get you through the day if you're not a heavy user, but if you are, you will need to recharge them before the day ends.

Neither of these two phones can compare to the Huawei P30 Pro, or any of the other heavy hitter in the segment of battery life. The Galaxy S10+ offers more juice than the Galaxy S10, though that is not surprising.

If your battery does run out of juice ahead of time, you'll be able to recharge it faster using the G8 ThinQ's charger, as the phone supports Quick Charge 3.0 fast charging. The Galaxy S10 comes with Quick Charge 2.0 fast charging, which is a bit slower.

The US model of the LG G8 ThinQ comes with two cameras on the back, the main one, and an ultrawide angle one. The Galaxy S10, on the other hand, includes both a telephoto and a wide-angle camera on the back.

Both devices are more than capable of providing solid pictures during the day, with good dynamic range, white balance, and details in general. The Galaxy S10's output is a bit more contrasty than the G8 ThinQ's, though, which ultimately makes those pics look more appealing, if a bit unnatural.

During the night, well, the Galaxy S10 pulls ahead. The phone recently received a dedicated night mode which enables it to bring more light into images, and it also decreases noise. The G8 ThinQ does an okay job during nighttime, but it cannot compete with the Galaxy S10, its pictures end up being darker than they should.

If you're wondering about audio, do not fret, as both phones are quite capable in this regard. Both devices include a 3.5mm headphone jack, while the Galaxy S10 comes with stereo speakers as well. The G8 ThinQ does not include stereo speakers, but its single speaker is really good.

The LG G8 ThinQ comes with DTS: X Surround Sound, while the Galaxy S10 offers Dolby Atmos support and AKG Sound. In translation, both will provide you with great sound once you plug in proper headphones, and take advantage of their DACs.

All things considered, we do believe that the Galaxy S10 is the better choice out of the two. The phone does look more appealing, offers slightly better performance, and has a better camera. The LG G8 ThinQ has great audio quality, and some of you may prefer it for its flat display.