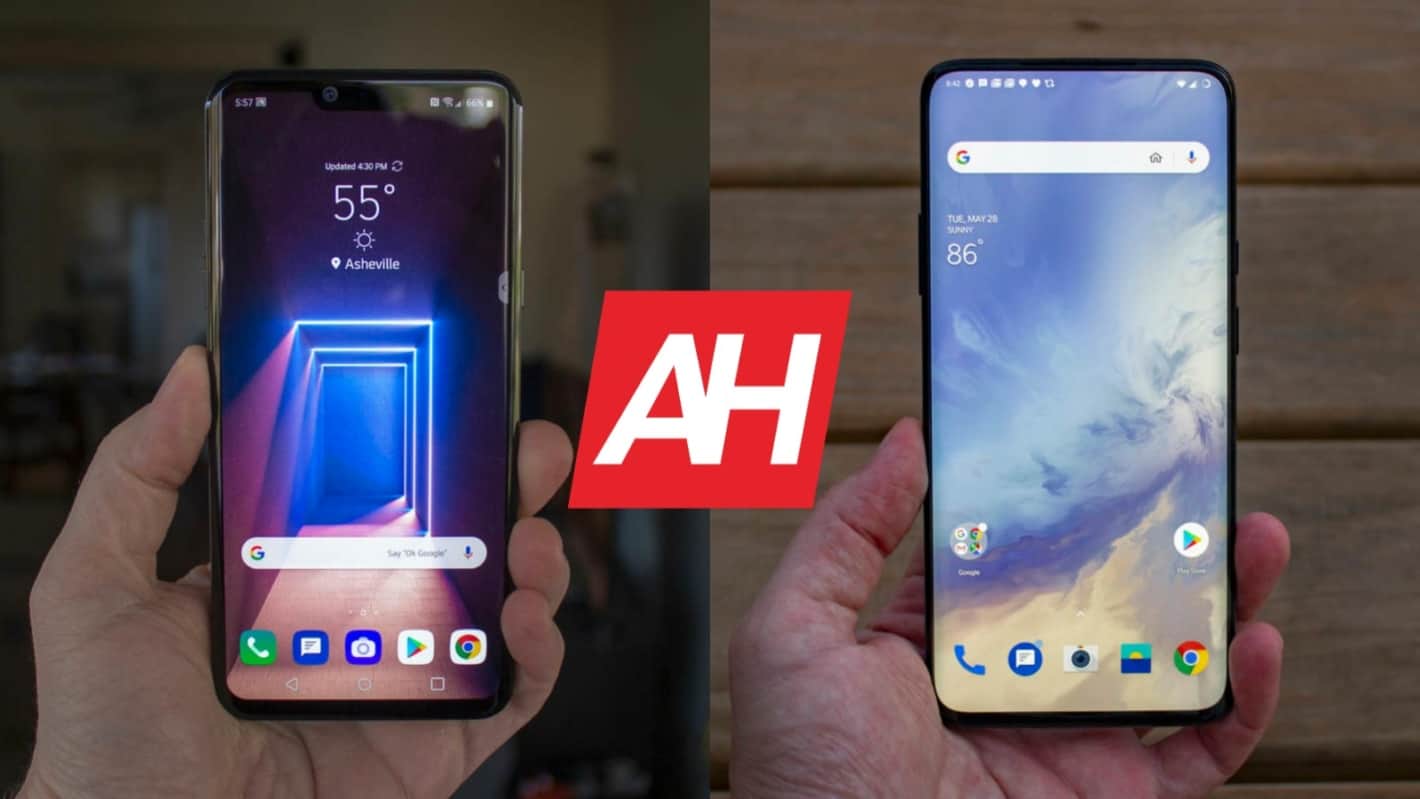 If you're looking the very best smartphones (5G phones not included) you can get from LG and OnePlus, the LG G8 ThinQ and OnePlus 7 Pro are the way to go. The LG V50 ThinQ 5G is also a flagship phone that LG announced recently, but that is a 5G smartphone, and its availability will be quite limited, so we're focusing on two 4G phones that are now widely available. Just to be clear, a 5G variant of the OnePlus 7 Pro is also coming.

In any case, both the LG G8 ThinQ and OnePlus 7 Pro are made out of metal and glass, and even though that is the case, these two phones are considerably different in pretty much every way. They do look different, their specs are not that similar, while the same can be said for their camera setups, and so on.

If you are considering which of the two phones to purchase, we'll try and help you out with that, as we usually do with such comparisons. We'll compare these two phones across a number of categories, starting with their specifications. Do note that this is only our opinion, you may think differently.

Both of these phones feature AMOLED displays, in the LG G8 ThinQ's case, we're looking at a 6.1-inch QHD+ P-OLED panel, and this is a flat display. The OnePlus 7 Pro, on the other hand, offers a 6.67-inch QHD+ Fluid AMOLED display which is curved.

The LG G8 ThinQ's display comes with HDR10 and Dolby Vision support, while OnePlus' offering is HDR10+ certified, and we're looking at a display with a 90Hz refresh rate here, which is something that the LG G8 ThinQ's panel does not offer.

Both of these displays are great, they're both extremely sharp, and they have great color reproduction and viewing angles. Contrast is great on both as well, but overall, the OnePlus 7 Pro's panel looks a bit better, while that 90Hz refresh rate makes it feel extremely smooth. If you're not into curved displays (or extremely large ones), though, the LG G8 ThinQ's panel may be a better choice.

Both of these phones are quite powerful. Both are fueled by the Snapdragon 855 64-bit octa-core processor, and both include enough RAM. The OnePlus 7 Pro, unlike the LG G8 ThinQ, does offer 6GB, 8GB, and 12GB RAM variants, while the LG G8 ThinQ is available in a 6GB RAM variant only.

These two phones are quite different in the software department, which also plays a huge role in the performance aspect. Both phones come with Android 9 Pie, but the LG G8 ThinQ ships with LG's UX 8.0 skin, while the OnePlus 7 Pro includes OxygenOS 9.5.

OnePlus' implementation of Android is considered to be one of the best out there, and it makes the phone perform really smooth. Truth be said, the LG G8 ThinQ is also plenty fast, but the OnePlus 7 Pro just seems a step ahead in terms of sheer performance, that displays also helps boost the whole experience.

Both devices can run pretty much every game you throw at them, and for the vast majority of reasons, both phones will be more than enough. Those of you who do nitpick, and want the ultimate performance, the OnePlus 7 Pro is probably a better choice.

Battery life is extremely important when it comes to smartphones, so you'll be glad to know that both of these phones are capable of providing you with really good battery life. The LG G8 ThinQ does have a noticeably smaller battery, but its display is considerably smaller than the OnePlus 7 Pro's, not to mention that it has a standard 60Hz refresh rate.

Standby time on the LG G8 ThinQ is great, and even though the vast majority of users will be able to get through the day with its battery, power users will probably need to plug it in real quick during the day.

The LG G8 ThinQ does offer wireless charging, though it's pretty slow at 9W. The OnePlus 7 Pro, on the other hand, does not have that option. Neither of the two phones offer reverse wireless charging.

The LG G8 ThinQ is missing a telephoto lens on the US variant, and that shows in some instances, of course. Both the LG G8 ThinQ and OnePlus 7 Pro deliver great images in normal light conditions, and even though there are some differences in color reproduction and dynamic range, they're both great in that regard.

The OnePlus 7 Pro's camera has issues with focusing sometimes, with closeup shots of food, for example. That doesn't happen all the time, but it's something we've noticed. The LG G8 ThinQ does offer better results when it comes to front-facing camera shots, though not by much, in all honesty.

Please do note that the OnePlus 7 Pro does not have an official IP rating for water and dust resistance. The LG G8 ThinQ, on the other hand, does have IP68 certification. The OnePlus 7 Pro can handle some rain, and it should be fine if you drop it in a puddle or something.

In terms of audio, well, the LG G8 ThinQ is a better option if you're using headphones, otherwise, the OnePlus 7 Pro takes the cake. The LG G8 ThinQ comes with a 3.5mm headphone jack, and 32-bit/192kHz audio with DTS:X Surround Sound, but it does not include stereo speakers. The OnePlus 7 Pro does not sport a 3.5mm headphone jack, but it does ship with stereo speakers and Dolby Atmos sound.

Both of these devices are quite compelling, there's no doubt about that, but the OnePlus 7 Pro clearly has more to offer, across the board. The LG G8 ThinQ has its upsides, though, and it should be your choice if you're in a market for a smaller device, for sure.