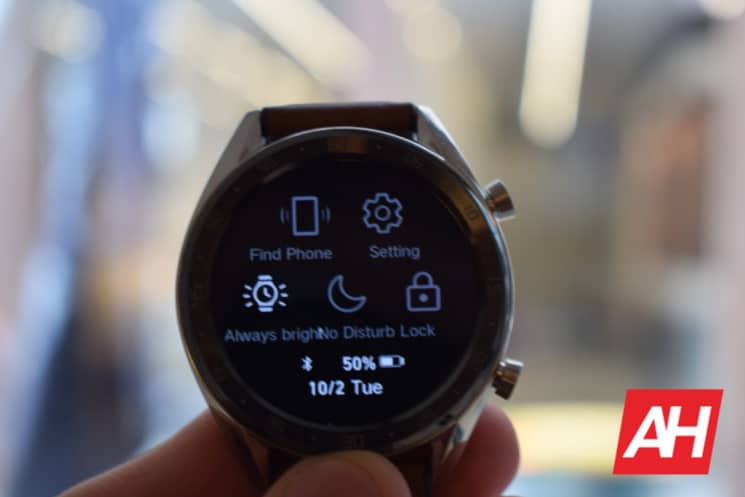 Huawei finds itself in political trouble currently, but there's a silver lining: the company has sold two million of its Huawei Watch GT smartwatch worldwide.

These two million units sold globally are for the Watch GT, not counting other models. The latest from analyst firm IDC shows that Huawei has had a year-on-year (YoY) growth of 282-percent for Q1 2019 as compared to Q1 last year. When taken into account with Huawei's Watch GT, Huawei has shipped a total of five million smartwatches, securing third place globally.

Huawei promises its Watch GT can get as much as thirty-day battery life if you're not tracking fitness activities constantly and receiving lots of notifications on it, but two-week battery life seems to be the most reasonable timeframe here since most users want notifications and fitness tracking on a daily basis.

Huawei has been able to achieve such fantastic battery life on the Watch GT by offering its own operating system called Lite OS for the device instead of Google's Wear OS. Huawei has placed some smartwatches on Android Wear (the predecessor to Wear OS) before, but the company says it chose Lite OS, its own proprietary operating system, instead of Wear OS because it believes smartwatches should last more than a day and a half to two days.

Lite OS is designed to be "lite" (hence the name), thus sipping battery instead of guzzling it, as is the case with Wear OS. Whether in Android Wear or now Wear OS, OEMs have struggled to get battery life just right because they'd need larger batteries in their smartwatches (which isn't an option when keeping the wrist wearable thin and light).

Another reason for the Watch GT's success, outside of battery life, is its appeal to a classic smartwatch. One of the biggest issues with smartwatches has been over the last few years their failure to mimic classic watches. Many look like bulky, "geeky" watches that, though packed with lots of smarts, are so obvious they're misfits.

Buyers don't mind a watch with "smarts," but they want a subtle watch that's fashionable and useful. In other words, the "form vs. function" war continues with smartwatches, but Huawei seems to have nailed it here with the Watch GT according to a number of users worldwide.

The Watch GT, though its moniker bears the word "Watch," isn't really a smartwatch but rather, a fitness tracker that mimics the look of a traditional watch. The Watch GT features a 1.39-inch AMOLED display with a 454 x 254p screen resolution,  5ATM water resistance, and a 420mAh battery. GPS, GLONASS, and GALILEO offer location tracking when running, swimming, walking, hiking, or any outdoor fitness activity. Huawei used artificial intelligence in its heart rate sensor on the Watch GT, the first time it ever experimented with AI integration in wearables.

Huawei debuted the popular Watch GT with its Band 3 Pro in October 2018. The Shenzhen-based manufacturer renamed the original Watch GT as "Watch GT Active" and created a smaller, 42mm watch it calls "Watch GT Elegant Edition." It released the Watch GT in the United States in February.

While Huawei's Watch GT Active and Elegant variants will survive the Trump Ban, the company's smartphones will not. Currently, Huawei is seeking an alternative OS with Android compatibility to still release its Mate X, Matebook laptop, and other high-end smartphones later this year. On August 19th, the Trump Ban will take full effect unless the two countries reach a trade deal beforehand.