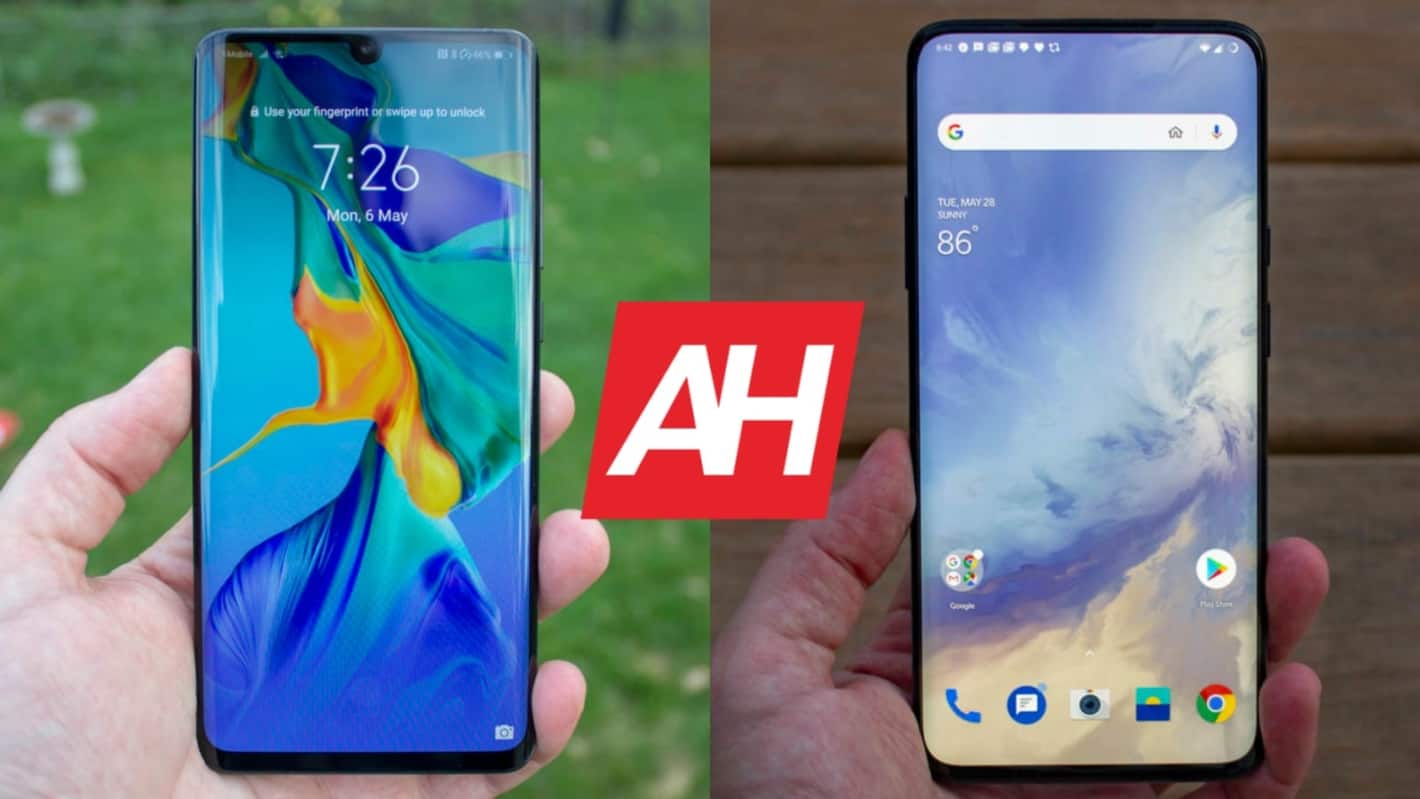 These two phones are considerably different in a lot of ways, so chances are that you won’t have a hard time choosing between the two, depending on what your priorities in a smartphone are, of course.

We will try and help you reach a decision, by comparing the two phones in a number of categories, as we usually do. We’ll kick things off by listing specifications of both of these devices, and move to design, display, and all the other categories. So, if you’re interested in buying one of these two devices, or are simply interested to see how they compare, read on.

Both of these phones are made out of metal and glass, though they are somewhat different in terms of looks, and you’ll definitely feel the difference when it comes to in-hand feel. The Huawei P30 Pro is a more compact smartphone in every single way, though it is not a small phone, far from it.

The Huawei P30 Pro comes with a large 6.47-inch display, while the OnePlus 7 Pro includes a 6.67-inch panel. The two phones even include the same display aspect ratio, and both devices feature curved displays.

The OnePlus 7 Pro does look more appealing, though, as it does not include a notch, a display hole or anything of the sort. The Huawei P30 Pro sports a dewdrop notch at the top of its display. Both phones include extremely thin “chins” below the display, while both include three cameras on the back, not counting the P30 Pro’s ToF 3D camera.

The OnePlus 7 Pro’s camera setup on the back does look nicer than Huawei’s, from the design standpoint, it is centered in the middle, and there are no sensors on the side to mess with the design.

The OnePlus 7 Pro is a larger, and heavier phone, so if that is something that worries you, you should get the Huawei P30 Pro. From the design standpoint, though, the OnePlus 7 Pro is a winner here, as the phone simply looks better, that display looks extremely immersive thanks to no interruptions, while the back side of the phone also looks nicer, at least in our book.

Both of these phones have large displays, but the OnePlus 7 Pro’s is definitely larger of the two. The OnePlus 7 Pro includes a 6.67-inch QHD+ Fluid AMOLED display, while the Huawei P30 Pro sports a 6.47-inch fullHD+ OLED panel. Both displays are curved.

The Huawei P30 Pro’s display is HDR10 certified, while the OnePlus 7 Pro’s is HDR10+ certified, not to mention that it comes with a 90Hz refresh rate, which makes everything feel that much smoother.

The Huawei P30 Pro’s display does look really nice, but it cannot compare to the OnePlus 7 Pro’s panel. OnePlus managed to come up with one of the best displays in the market, and not only is it a lot sharper than Huawei’s panel, but it comes with HDR10+ certification and that high refresh rate.

So, what about performance? Well, both of these phones are beastly devices in terms of specs, and the very best their companies have to offer… but do they deliver in terms of performance? The answer is yes, very much so.

Both phones can blaze through anything you throw at them, and for the most part, you will not see any issues in terms of performance on either phone. It is worth noting, though, that hiccups are more common the P30 Pro, though, and chances are software is to blame here.

The OnePlus 7 Pro comes with OxygenOS, which is well-known for its optimization, while the Huawei P30 Pro includes Emotion UI (EMUI) skin, Huawei’s very own implementation of Android.

Emotion UI has come a long way in the last couple of years, but you’re more likely to stumble upon a momentary issue in EMUI, than you are in OxygenOS. So, even though both phones can handle anything you throw at them, and offer top-notch performance, the OnePlus 7 Pro is a small step ahead.

Both of these phones come with large battery packs, but that doesn’t really say the whole story, it never does. The Huawei P30 Pro includes a 4,200mAh battery, while the OnePlus 7 Pro comes with a 4,000mAh battery pack.

If you use the phones as they come out of the box, you will get plenty more juice from the Huawei P30 Pro. This phone’s fullHD+ panel, in combination with the phone’s battery pack, and Emotion UI’s battery-related optimizations beats the OnePlus 7 Pro.

The OnePlus 7 Pro’s display is the main reason why that is, it comes with a considerably higher resolution, while that 90Hz refresh rate is draining battery noticeably more than a 60Hz refresh rate.

Truth be said, you can change that display’s refresh rate to 60Hz, if you want, in which case the OnePlus 7 Pro’s battery life will be much more comparable to the Huawei P30 Pro’s, but the P30 Pro will come out on top in that form as well, at least it did for us. The P30 Pro is actually one of the best flagship phones out there when it comes to battery life, if not the best.

The Huawei P30 Pro is a better pick when it comes to camera performance, for a number of reasons. In regular light, during the day, both phones are great, but when the light goes away, the P30 Pro has an upper hand.

That’s not all, though, the P30 Pro comes with a telephoto camera which offers proper 5x optical zoom, but it allows you to zoom up to 50x, and those pics actually look decent as well, believe it or not. The OnePlus 7 Pro, on the other hand, offers 3x lossless zoom.

The OnePlus 7 Pro’s camera performance is really good, though, especially after a recent update which improved HDR and Nightscape performance. The phone still has trouble focusing in some conditions, that usually happens indoors with close-up shots, but that can also be fixed via a software update.

As things stand at the moment, the Huawei P30 Pro is a better choice when it comes to photography, and that goes for video as well. The P30 Pro is considered to be one of the best camera smartphones in the market, if not the best, so that is not surprising.

Some of you are probably wondering what’s the situation in the audio department. Well, Neither of the two phones offer a headphone jack, while the P30 Pro does not include stereo speakers either, which was quite a disappointment when the phone was announced.

The Huawei P30 Pro’s loudspeaker is quite loud, and crisp, but it is not a match for the OnePlus 7 Pro’s stereo setup. Both phones ship with Dolby Atmos sound, though. Overall, the OnePlus 7 Pro is probably a better choice, as both offer solid audio when headphones are plugged in (via Bluetooth as well), but those stereo speakers do make a difference.

Overall, looking by the categories we came up with plus audio performance, the OnePlus 7 Pro is a winner in this comparison, but the Huawei P30 Pro did win in some categories, and it’s a close call.

At the end of the day, it will depend on what you need in a phone. If the camera performance, and battery life are your priorities, the P30 Pro is a better choice, while the OnePlus 7 Pro takes the cake in the display, performance, design, and audio categories.

It is worth noting that the Huawei P30 Pro’s Android future is in doubt at the time of writing this article, as Huawei has been handed a trade ban by the US, and Huawei may step away from Android later this year. We still do not know how will this play out, but it is worth noting.