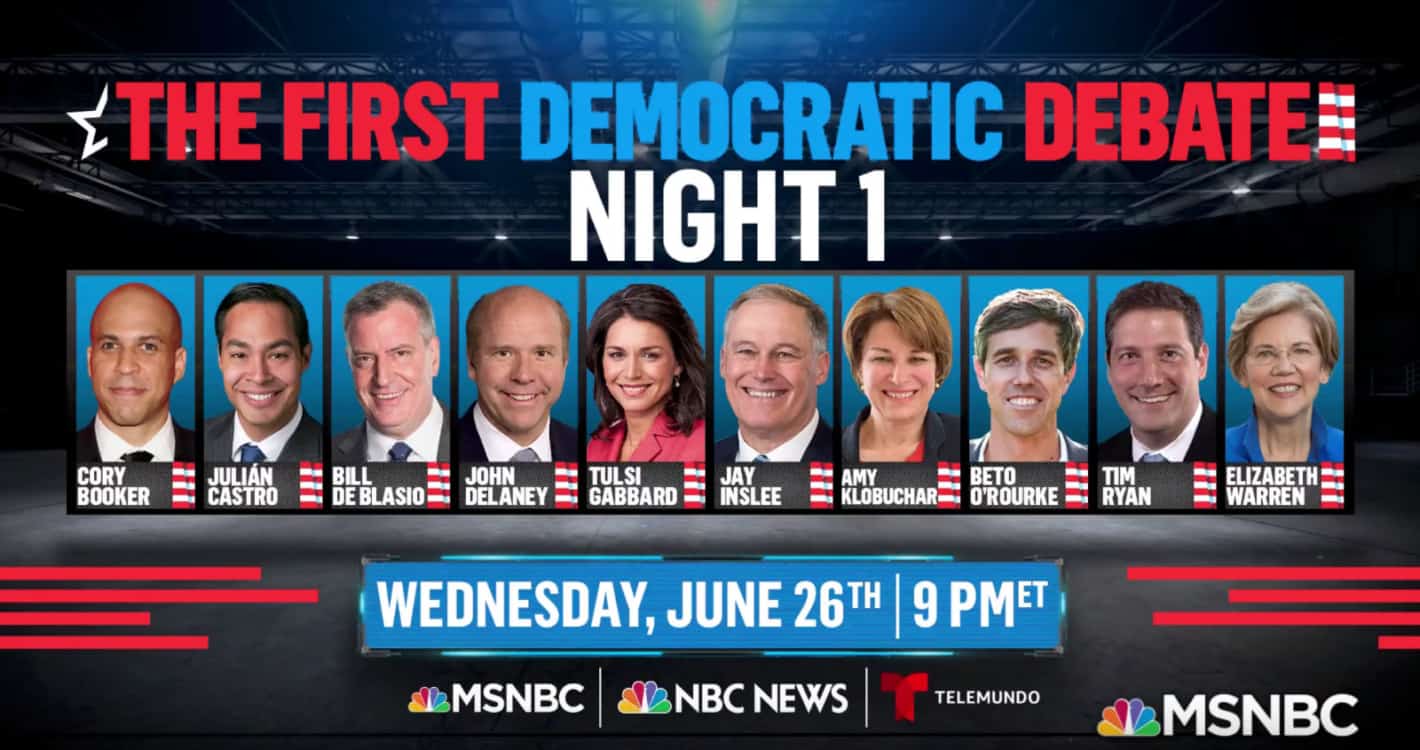 The first Democratic Primary debate for the 2020 presidential election is here. And while it does seem pretty early, the Democrats do need to start narrowing down the number of candidates that are running, within the next year, before the convention next July. And that starts tonight, even before the first vote is cast in Iowa in 2020.

There are so many Democrats running to be President this time around, that the first debate is going to be a two-night affair. Night one, which is tonight (Wednesday, June 26) and it starts at 9PM ET. It includes Senator Cory Booker, former HUD secretary Julian Castro, Bill de Blasio, former Rep. John Delaney, Rep. Tulsi Gabbard, Washington Governor Jay Inslee, Senator Amy Klobuchar, former Rep. Beto O'Rourke, Rep. Tim Ryan and Elizabeth Warren.

Meanwhile, Night two is bound to be a blockbuster for ratings. With it featuring many of the heavy hitters. Night two will include Senator Michael Bennet, former vice president Joe Biden, Mayor Pete Buttigieg, Senator Kirsten Gillibrand, Senator Kamala Harris, former Governr, John Hickenlooper, Senator Bernie Sanders, Rep. Eric Swalwell, Marianne Williamson and Andrew Yang. That's ten names on each night, which means these debates are either going to be very long, or responses will be a single word.

How To Watch The Debate

The democratic debate is going to be live on MSNBC, NBC and Telemundo. So if you have cable still, it's just as easy as tuning into one of those stations.

If you're a cordcutter, you will want to tune into one of those channels on your streaming TV service. Of course, if you don't subscribe to one, you can use an OTA antenna to get NBC. But the easiest way will likely be to use the NBC News app. It's available on Android, Amazon Fire TV, Apple TV, Roku and iOS. Unfortunately, there's no Android TV support from the NBC News app just yet.

All the streams are going to be available for free, through the NBC News app, so you don't need to subscribe to a streaming TV service. But if you already have it, then it makes things a bit easier, as all you need to do is open the app and tune to NBC, MSNBC or Telemundo to watch the debates tonight.

Unlike the presidential debates leading up to the general election, this debate will not be available on all the networks. Primary debates are limited to one network or a family of networks (as is the case with NBC Universal this time). So there's less places to watch the debate, but it is still free for everyone to watch.

The debates will start at 9PM ET each night, like the NBA Finals. This is in primetime, so NBC is expecting some big ratings. It'll be interesting to see if NBC does get those big ratings, seeing as we are so far away from the Iowa caucuses still – which take place on February 3, 2020. This is just the first of 12 debates, before the convention next July, so if you can't watch tonights' debates, don't worry. There's plenty more coming.