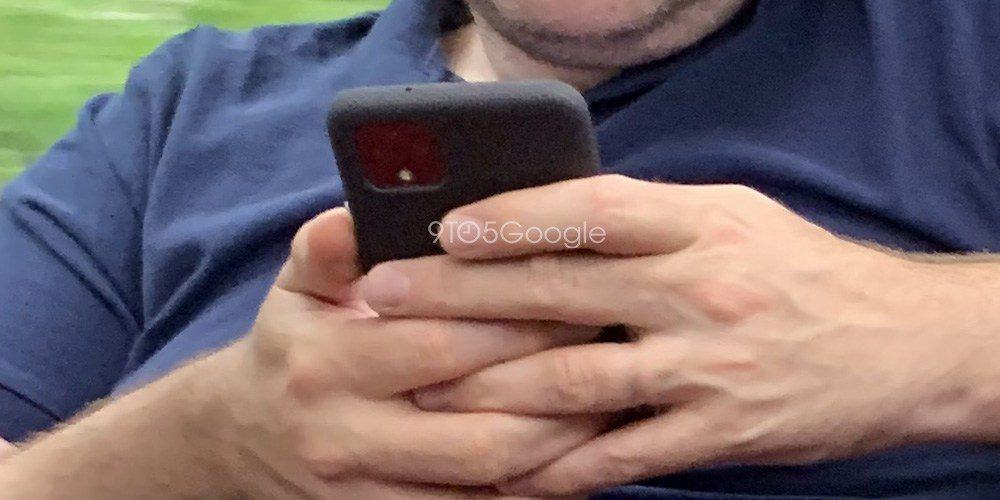 As if the Pixel 4 didn’t leak enough already this week, there is a new picture floating around of what looks to be the new Pixel 4, outside in someone’s hands.

This follows the tradition of previous Pixel smartphones, which were all found on different trains, subways and buses, mostly in Canada. Which shows us that Google isn’t even trying to hide the Pixel, before launch.

There’s not a lot to see in this picture, all you can really see is the camera module on the back, which does line up rather perfectly with the image that Google tweeted out earlier this week – when it essentially confirmed some of the many leaks that we’ve seen. It’s in a case, but it doesn’t really look like the fabric case that Google sells with the Pixel. This looks to be a bit thinner, and perhaps offer more protection.

The picture is a bit pixelated, as it is possible that the person that took the photo had zoomed in quite a bit to get this photo. Hopefully whoever is holding that Pixel 4 doesn’t get fired over this, seeing as you can see their hands and the bottom part of their face.

The Pixel always seems to get leaked out in public, shortly after the leaks start to flow in, around the summer time. It’s almost like Google does this on purpose to drum up some hype around the company’s new smartphone. Though it’s unlikely, but it is plausible.

After Google actually posted a picture of the Pixel 4 earlier this week, the Internet has been buzzing about it. So mission accomplished, Google. But that hasn’t slowed down the leaks.

From what we can see here, the Pixel 4 is going to have at least two cameras (possible two plus a Time of Flight sensor), which is going to be a first for a Pixel smartphone. Google has always stuck with just one camera on the back, and doing plenty of magic with its software. But now that it is adding a second camera, many are interested to see what Google can do with a second lens. Seeing as its single lens was still better than most dual and triple-camera setups out there.

Of course, we can’t see it in this picture, but the person that took the photo did state that there is a forehead bezel here, and not a notch. With two front-facing cameras. So it’ll be similar to the Pixel 3, which is going to make a lot of people happy. This does also coincide with the rumors we heard from a few other sources this week, about the front of the phone. But it still has not been shown.

The Pixel 4 is still quite a ways away from being announced. Google typically announces it in October, and if the leak from Verizon yesterday was anything to go by, it’s still coming in October. That’s four months from now. Meaning that we’re going to have a ton of leaks and rumors coming our way. So you’d better buckle up.