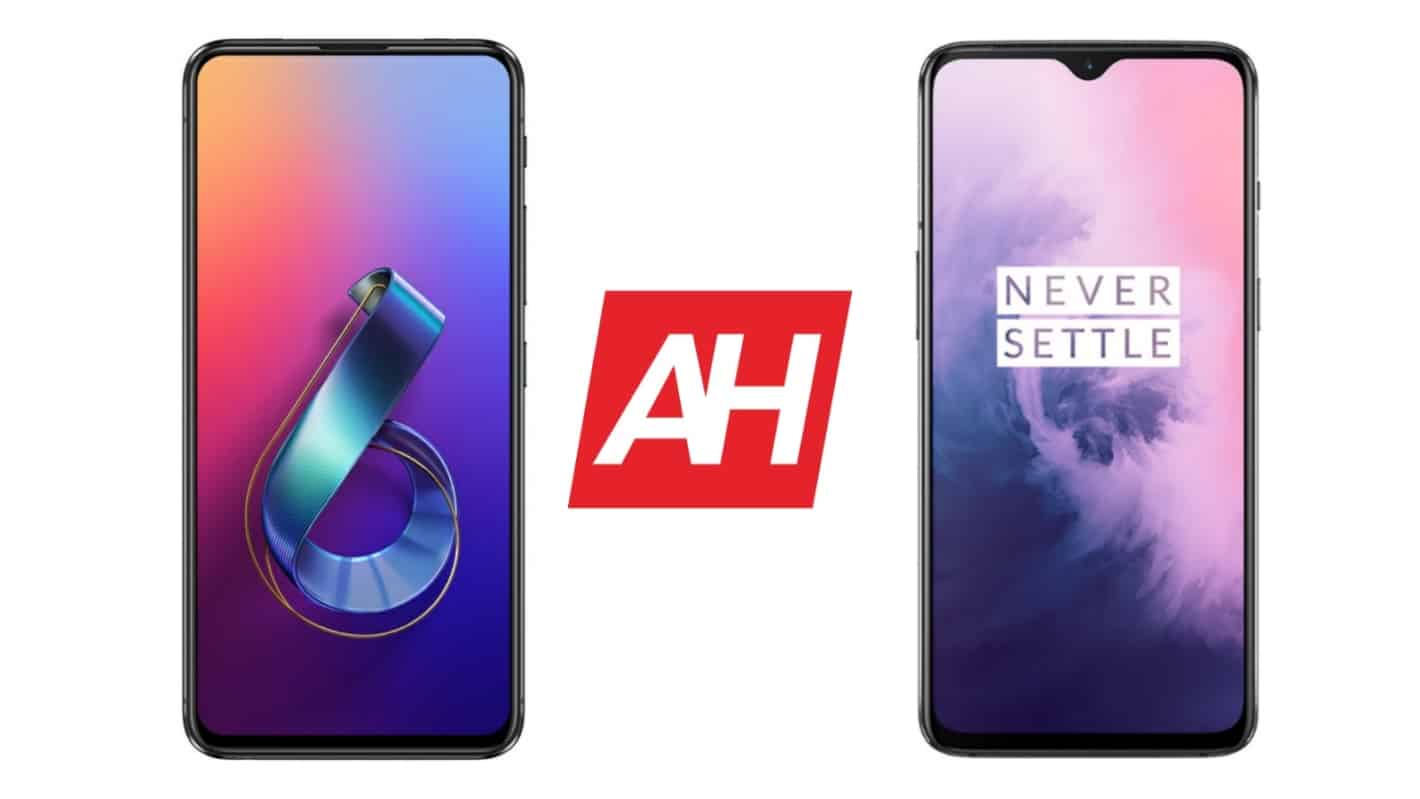 We've recently compared the ASUS ZenFone 6 and the OnePlus 7 Pro, and it's now time to compare the more affordable OnePlus 7 unit to ASUS' flagship. The OnePlus 7 is not as expensive as the OnePlus 7 Pro, nor does it come with all the bells and whistles of the company's most powerful smartphone, but it does pack quite the punch.

These two phones both look quite sleek, and pack in quite a powerful hardware, but there are quite a few differences that we can focus on. We'll start by listing both devices' specifications, and work our way from there. The two phones will be compared in a number of categories, as per usual.

Both ASUS and OnePlus used metal and glass to manufacture these two smartphones, though the two devices do look quite different. The ZenFone 6 sports slightly thicker bezels, though bezels on both devices are really thin. The ZenFone 6 does not include a display notch or a display hole, while the OnePlus 7 does come with a waterdrop display notch.

Both devices include a thin "chin" below the display, and both of them include a flat display, and rounded display corners. The back side of the OnePlus 7 offers a sleeker look, as the phone does not include a rear-facing fingerprint scanner, like the ZenFone 6, while its rear-facing camera setup is more eye-pleasing than what the ZenFone 6 has to offer.

The ASUS ZenFone 6 includes its flip-up camera setup on the back, and it's not exactly the prettiest thing to look at. Both phones are curved on the back, and both offer brandings from their respective companies.

The ASUS ZenFone 6 comes with a 6.4-inch display, while the OnePlus 7 includes a 6.41-inch panel. Both of these phones offer flat, fullHD+ displays, and they both offer the same display aspect ratio (19.5:9).

These two displays are considerably different, though, as the ZenFone 6 includes an IPS LCD display, while the OnePlus 7 comes with an Optic AMOLED panel. The OnePlus 7's display sure is more eye-pleasing, despite the fact this is the same panel OnePlus used in the OnePlus 6T.

The OnePlus 7's display offers punchier colors, blacks look better on it, and in general it's more pleasing to look at, even though the ZenFone 6's display is really good for an LCD panel. Viewing angles are great on both devices, so that's not an issue at all.

The Snapdragon 855 64-bit octa-core SoC fuels both of these phones, which means they have plenty of horsepower under the hood. Both devices offer plenty of RAM as well (6GB and 8GB RAM variants are available), while both ship with the latest version of Android as well.

On top of Android 9 Pie, ASUS has included its ZenUI 6 skin, while the OnePlus 7 ships with OxygenOS 9.5. Both of those skins are close to stock Android, and both perform really well. ZenUI 6 represents a huge change compared to ZenUI 5, as ASUS decided to almost completely debloat its Android overlay.

OxygenOS does feel smoother to use, though, in combination with OnePlus' hardware. That is not all that surprising, as OnePlus has been developing OxygenOS for years, and it's one of the best Android skins out there, while ASUS will probably further optimize ZenUI 6 as time goes by.

All in all, both phones offer great performance, no doubt about that, but the OnePlus 7 does seem to be one step ahead: Its powerful hardware, OxygenOS, and UFS 3.0 storage all work together in order to make that possible.

The ASUS ZenFone 6 is difficult to beat when it comes to battery life, and even though the OnePlus 7 does offer really solid battery life, the ZenFone 6 has an upper hand in this regard.

ASUS stuffed in a 5,000mAh battery inside the ZenFone 6, which is a huge battery pack, even for such a large display. The Snapdragon 855 has excellent power management, in addition to Android 9 Pie, and the ZenFone 6 can provide you with great battery life, even if you're a heavy user.

The OnePlus 7, on the other hand, has a 3,400mAh unit, which does seem small in comparison, but it's not. The OnePlus 6T had excellent battery life with the same battery and the same display, while its SoC was not as great as the Snapdragon 855 in terms of battery management. The OnePlus 7 can also provide you with great battery life, it's not as good as what the ZenFone 6 has to offer, but it's not that far from it either.

Both the ASUS ZenFone 6 and OnePlus 7 have two cameras on the back, though there's one major difference here… the ZenFone 6 uses those cameras as front-facing ones as well. The phone comes with a flip-up camera setup, so it doesn't have a specialized front-facing unit.

Both devices use a 48-megapixel main camera (Sony's IMX586 sensor), while there's quite a bit of difference when it comes to the secondary camera. The ZenFone 6 comes with an ultrawide camera, while the OnePlus 7 includes a depth sensor.

Generally speaking, both phones are quite capable in the camera department, but ever since the OnePlus 7 got the camera update not long ago, it does pull ahead of the ZenFone 6. During the day, the OnePlus 7's camera balances photos better, especially in sunlight, while it also offers better dynamic range, and slightly more detail.

The OnePlus 7's night mode is also more capable than the ZenFone 6's, as it can provide lighter images, with less noise. The ZenFone 6 shines in the selfie department, though, which is not surprising at all considering that it uses its main cameras as its selfie ones. All in all, though, the OnePlus 7 does have an edge here.

Before we get down to the conclusion, let's talk about audio for a bit. If you need a headphone jack, the ZenFone 6 is the only choice here, as the OnePlus 7 does not include one. Both devices include stereo speakers, though, and both of them are good enough.

The ZenFone 6 comes with DTS Headphone X sound, while the OnePlus 7 offers Dolby Atmos sound support. Both phones are capable of providing decent sound via headphones, though the ZenFone 6 does sound better in the end.

Overall, the OnePlus 7 is the winner of this comparison, though the ZenFone 6 is definitely not far behind. ASUS did not release a flagship phone for a while not, and the ZenFone 6 surely managed to surprise quite a few people with its arrival. ASUS did many things right with the phone, so both devices are a great choice.