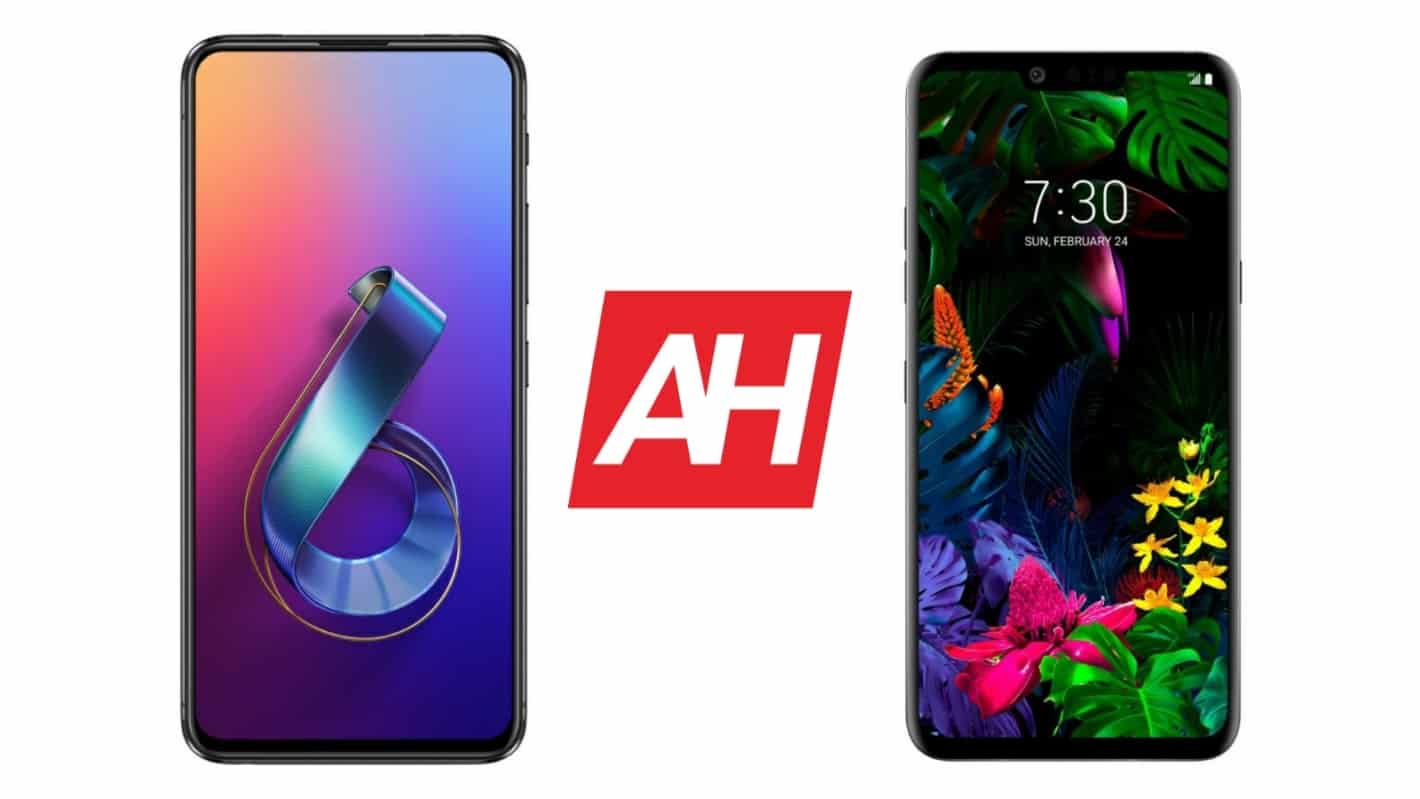 ASUS managed to surprise quite a few people when it launched its ZenFone 6 handset, mainly due to its design and software. Those of you who are considering to buy the device, probably wonder how it stacks up next to some other flagships, and the next phone we'll pit against it is the LG G8 ThinQ.

The LG G8 ThinQ was announced earlier this year, in February, and even though it's not as popular as some other flagships in the market, this phone does have a lot to offer. The LG G8 ThinQ is, however, considerably more expensive than the ZenFone 6, so let's see if it's worth it.

As it is usually the case with our comparisons, we will compare the two phones in a number of different categories, ranging from their specifications and design, all the way to their battery life and camera performance… so, let's get started.

Both of these phones are made out of metal and glass, but despite that, they look quite a bit different, while the in-hand feel is also different, mainly due to the size difference. The LG G8 ThinQ is a considerably smaller phone than the ZenFone 6, and some of you will probably appreciate that.

The ZenFone 6 is quite a bit taller and wider than the LG G8 ThinQ, while it is also thicker and heavier than LG's flagship. That is not all that surprising considering the difference in their display size (they do have the same display aspect ratio).

The ZenFone 6 looks more modern from the front, as it does not include a display notch or a display hole. The LG G8 ThinQ sports a display notch on the front, and that notch is not particularly small, as we're not looking at a waterdrop or a dewdrop notch here. Both phones have a "chin" below the display, though.

On the back, you will notice that both devices include a fingerprint scanner, though those two fingerprint scanners are different in shape. The LG G8 ThinQ's back side probably looks better to most of you due to the round fingerprint scanner, and the fact that the phone includes two regular cameras (the US model at least, some models come with three cameras) on the back, while the ZenFone 6 sports a flip-up camera setup, which is not exactly eye candy.

Despite the fact that its flip-up camera setup is kind of an eyesore, the ZenFone 6 does look more modern, mainly due to its clean front side. The LG G8 ThinQ looks like a 2018 phone, at least to us, that notch is a real eyesore, though some of you may prefer it.

As we mentioned earlier, the LG G8 ThinQ has a smaller display than the ZenFone 6, but its display is better of the two, noticeably better. The ZenFone 6 packs in a 6.4-inch fullHD+ IPS LCD panel, while the LG G8 ThinQ includes a 6.1-inch QHD+ P-OLED display.

Not only is the LG G8 ThinQ's display considerably sharper, but it's also an OLED panel, so it provides you with deep blacks, and great contrast overall. The ZenFone 6's display is good, but when stacked side-by-side with the G8 ThinQ's panel, it looks washed out.

All in all, the LG G8 ThinQ has more to offer in this category, even though both displays are good, and offer good viewing angles, the LG G8 ThinQ's OLED panel is a step above the IPS LCD panel that can be found on the ZenFone 6.

So, what about performance? Well, both of these phones are flagship offerings which are fueled by the Snapdragon 855, while they also come with plenty of RAM, and various other spec-related goodies.

The ZenFone 6 ships with either 6GB or 8GB of RAM, while the LG G8 ThinQ comes in a 6GB RAM flavor only. Both devices ship with Android 9 Pie out of the box, but their software is still considerably different, due to ASUS' and LG's Android overlays.

The ZenFone 6 comes with ASUS' ZenUI 6 skin, while the G8 ThinQ ships with LG UX 8.0. Both of those Android overlays are compelling, but ZenUI 6 seems to have an upper hand. It feels a bit smoother, and it does not pack as many arguably unnecessary features, such as LG's air gestures.

ASUS managed to clean up its ZenUI skin quite a bit in this version, remove a ton of bloatware, and keep it close to stock Android. That may not be the best choice for some of you, as you may prefer everything that LG UX 8.0 has to offer, but thanks to ZenUI 6 and the ZenFone 6's lower resolution, the ZenFone 6 does feel a bit more responsive, even though both devices offer really good performance.

The ZenFone 6 is hard to beat when it comes to battery life, mainly because ASUS packed in a large 5,000mAh unit in this device which in combination with its SoC, software, and a fullHD+ display, delivers truly great results.

The LG G8 ThinQ is not bad as far as battery life goes, but it's not close to what the ZenFone 6 can offer. Power users will likely have to recharge the G8 ThinQ's battery pack during the day, while the same cannot be said for the ZenFone 6's… maybe those of you who are really pushing your phone to the limit, either by gaming or intense movie-watching.

All things considered, the ZenFone 6 takes this category, it will keep your phone juiced up for considerably longer than the LG G8 ThinQ, at least for most of you, that is hard to deny.

The LG G8 ThinQ is not the very best camera smartphone out there, but it has a lot to offer in that regard, more than the ZenFone 6, at least as far as the final output is concerned. The LG G8 ThinQ's camera does not really shine in low light, at least its night mode does not, but the same can be said for the ZenFone 6.

In pretty much every other scenario, the LG G8 ThinQ does a bit better, though the ZenFone 6 can trump it in certain situations. During the day, both phones are compelling, but the LG G8 ThinQ has better dynamic range, while it also doesn't tend to overexpose some shots as the ZenFone 6. It is worth noting that ASUS did release quite a few updates for the ZenFone 6 in a short period of time, and the camera did improve quite a bit.

If you're into panorama shots, or shooting from weird angles, the ZenFone 6 can take a panorama shot on its own, thanks to its flip-up camera setup. You can also manually move those cameras to set the right angle for your shot, which can be immensely useful. All things considered, both of these cameras are good, and they're not that much different, but we'll give the LG G8 ThinQ an advantage here.

We did not talk about audio, and we do know how important that is to some of you. We can say that the LG G8 ThinQ is, without a doubt, a better option in that regard. Both phones do offer a 3.5mm headphone jack, and the LG G8 ThinQ does not include stereo speakers like the ZenFone 6, but despite that, it's a better choice.

So, what's the conclusion? Well, both of these phones are quite compelling in their own right, and each of them shines in a specific category. Truth be said, we do see them as equals, as they are quite a bit different, and when you compare all of those categories, they do even out in a way, especially if you consider the audio aspect… so, we'll call this one a tie.