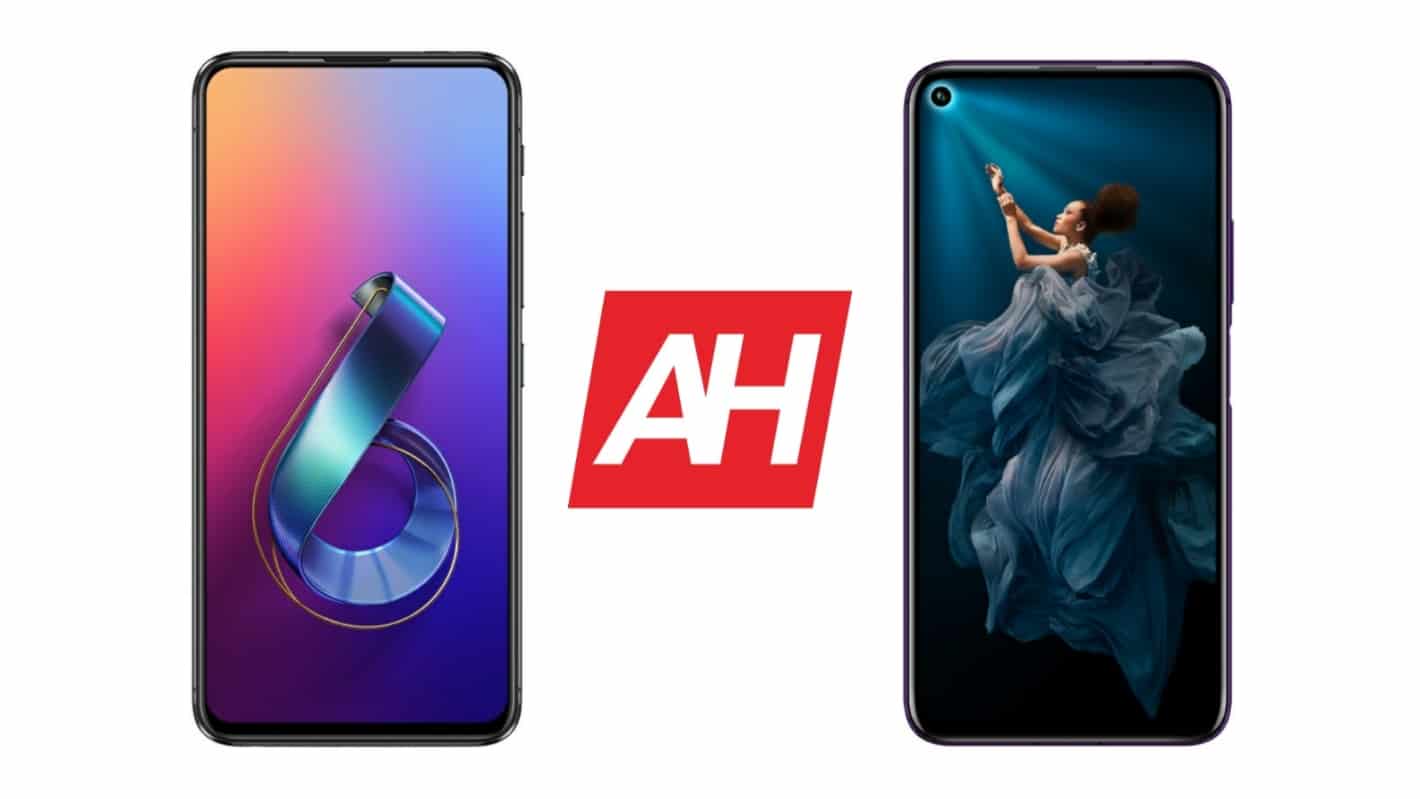 The ASUS ZenFone 6 and HONOR 20 Pro are both budget smartphones. These two phones are considerably more affordable than the competition, including the Galaxy S10+, OnePlus 7 Pro, Huawei P30 Pro, and so on.

Both devices have been announced last month, in May, and both have plenty to offer, though they are considerably different in execution. There are some similarities between the two phones, of course, as they do include similar displays, for example, but for the most part, these two phones are quite a bit different.

If you're in the market for a new flagship phone, and you're not looking to spend a whole lot of money, these two phones are amongst the best offers out there you can find, in regards to what you're getting for your investment. So, let's put these two phones head-to-head and see which one comes out on top.

These two phones are both made out of metal and glass, but design approaches are still quite different here. ASUS opted to include a flip-up camera system on the ZenFone 6, which means that its two rear-facing cameras actually serve as front-facing ones as well. The HONOR 20 Pro, on the other hand, includes three cameras on the back, and a single one on the front.

Considering that the ZenFone 6 does not have stationary front-facing cameras, it does not really have a display camera hole, or a display notch, unlike the HONOR 20 Pro. HONOR had to include a display camera hole on the phone, and it is located in the top-left corner of its display. That hole is quite small, but it's still visible and can get in the way.

Both of these are nice-looking phones, no doubt about that, and truth be said, we cannot pick one. They both have one major sore point that gets in the way, in the ZenFone 6's case it is its camera setup which is not exactly eye-candy, while in the HONOR 20 Pro's case it's that display camera hole. So, the front side looks better on the ZenFone 6, while the back side is more appealing on the HONOR 20 Pro, basically. It's all a matter of your personal preference.

Both devices include IPS LCD panels, unfortunately, as OLED displays would be much more appreciated considering these are flagship devices. Still, both of these panels are really good, they're amongst the best IPS LCD panels out there.

Both devices include fullHD+ panels which come with a 19.5:9 display aspect ratio. These two displays are different in size, though, as the ZenFone 6 comes with a 6.4-inch display, while the HONOR 20 Pro includes a 6.26-inch panel.

The ZenFone 6's display is protected by a sheet of Corning's Gorilla Glass 6, and it is HDR10 certified. The HONOR 20 Pro panel's protection is unknown at the moment, while the phone does not come with HDR10 compatibility.

Both displays are flat, and both are more than good enough for the vast majority of people. If you are used to OLED displays, though, you may be disappointed. We cannot really decide between these two panels, as they're quite similar in terms of color reproduction and general look.

Both devices are quite powerful in terms of hardware. The ASUS ZenFone 6 is fueled by the Snapdragon 855 SoC, and it comes in both 6GB and 8GB RAM variants. The HONOR 20 Pro, on the other hand, packs in the Kirin 980 processor, and 8GB of RAM.

Those processors and RAM setups, combined with fullHD+ displays, and software that runs on these two devices, makes sure that both phones offer great performance. Both devices ship with Android 9 Pie out of the box, though skins on top of Google's OS are quite different.

The ASUS ZenFone 6 ships with ZenUI 6 overlay, which is miles better than ZenUI 5. ASUS decided to remove a ton of bloatware, and keep things nice and slick, close to stock Android. The HONOR 20 Pro's Magic UI, on the other hand, is very similar to EMUI that ships on Huawei devices, and it is a bit heavier than what ASUS has to offer.

We prefer the experience with the ZenFone 6 a bit more, though that does not have to be the case for you. Neither software implementations are the best out there, truth be said, but they're not far either. All in all, both phones offer great performance, and it's all a matter of your personal preference in terms of software.

The ASUS ZenFone 6 and HONOR 20 Pro are both great picks as far as battery life is concerned. These two phones include 5,000mAh and 4,000mAh batteries, respectively, and will be able to provide you with a full day's worth of battery life with ease. Even for heavy users, both devices should be enough to get them through the day.

In all honesty, the ZenFone 6 is able to provide a bit more juice than the HONOR 20 Pro, at least as far as we were able to see, but the two phones are fairly close, despite the fact the HONOR 20 Pro has a considerably smaller battery. Magic UI's optimizations plus a smaller display definitely help.

Considering everything we've said here, we'll give a small advantage to the ASUS ZenFone 6 in the battery department, though the HONOR 20 Pro is quite close. All in all, you won't go wrong in terms of battery life, no matter what phone you choose.

So, what about cameras, are these two handsets any good in that regard? Well, yes, definitely. The HONOR 20 Pro is better, though, just to get that out of the way. The HONOR 20 Pro's quad camera setup on the back is able to provide better images in pretty much all scenarios, not to say that the ZenFone 6 is bad, as it's not.

In daylight, the results are comparable, though we prefer the HONOR 20 Pro's colors, dynamic range, and white balance a bit more. As soon as the light goes away in any form, the HONOR 20 Pro does show how capable it is, and its night mode only helps things… even though pictures look really nice in auto mode as well.

The HONOR 20 Pro provides you with more versatility as well, as it includes a telephoto lens, and a dedicated macro lens, while the ASUS ZenFone 6 includes "only" an ultrawide angle lens, in addition to its main sensor. The ZenFone 6 is far better as far as selfies go, as it uses its rear-facing cameras as its front-facing ones as well. It is worth noting that the ZenFone 6's cameras do not offer OIS, unlike the HONOR 20 Pro. That may be the reasons why HONOR 20 Pro's shots do turn out better in most situations. The HONOR 20 Pro wins this round.

In case you're wondering what's the situation in the audio department, well… both phones are quite capable in that regard. It is worth saying that the HONOR 20 Pro does not include a 3.5mm headphone jack, though, unlike the ZenFone 6.

Both of these phones are quite compelling, that's for sure, and they're even priced similarly. The ZenFone 6 takes the lead in the battery department, while the HONOR 20 Pro does the same in the camera department. In all other cases, the two phones are extremely close, and thus we really cannot highlight only one, it all depends on what you need, but both are great choices. Do note that the HONOR 20 Pro is facing some issues due to the US trade ban (at the time of writing this article).