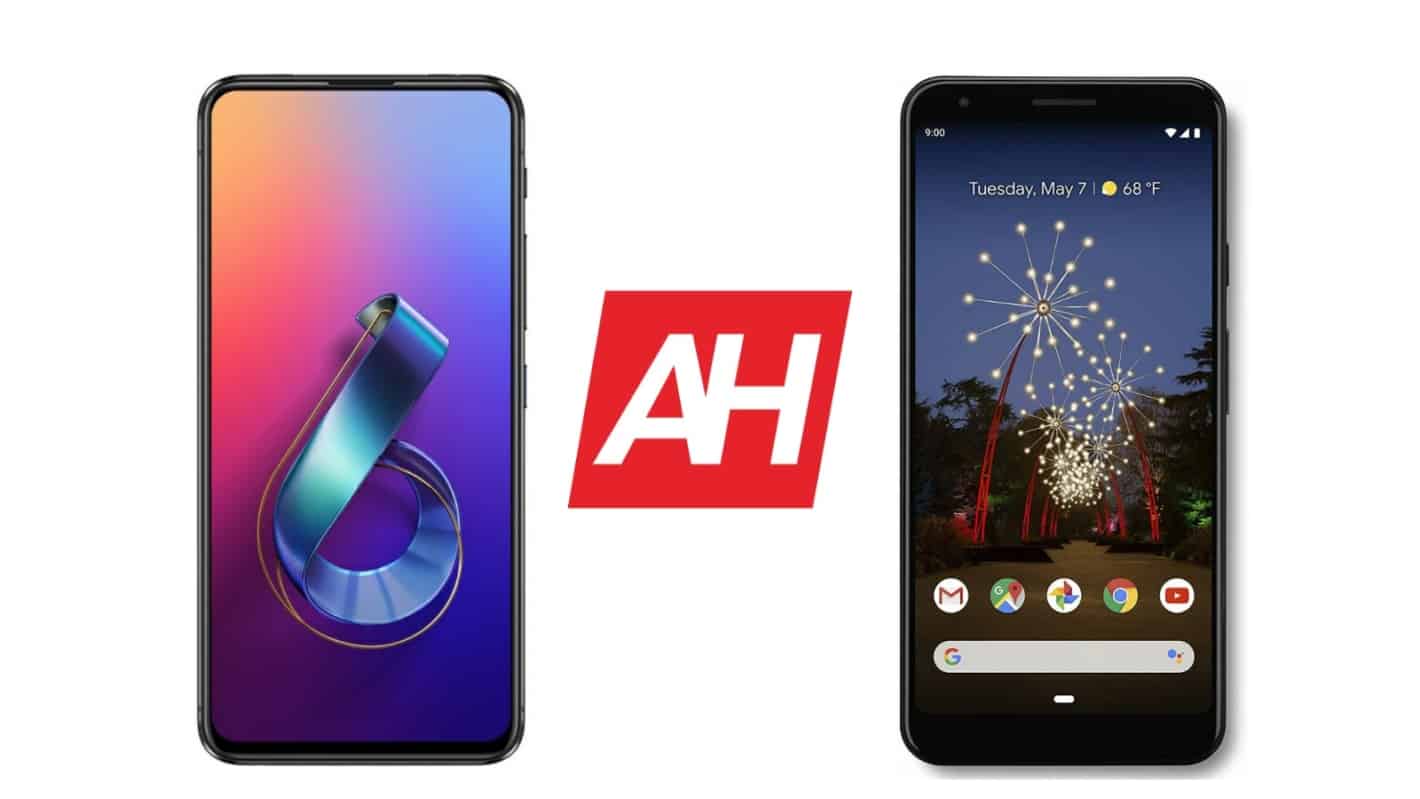 This is a rather interesting comparison, as the ASUS ZenFone 6 is a flagship, while the Google Pixel 3a XL is not. Still, the difference in pricing between these two phones is around $20, so we'll try to figure out if it's worth splashing out a bit extra money for the ZenFone 6, if you can get the Pixel 3a XL for around $479.

These two phones could not be more different, they look different, different materials are used in their build, they have considerably different camera setups, their specifications are not even close, and so on. The ZenFone 6 and Pixel 3a XL are as different as they can be.

So, as per usual, we'll compare these two smartphones across a number of categories, to figure out what device is best for you. We'll start with specifications, and make our way from there all the way to the conclusion.

These two phones are quite different when it comes to design. The ZenFone 6 is made out of metal and glass, and it barely has any bezel, while Google used polycarbonate (plastic) in order to make the Pixel 3a XL, while that phone does have noticeable bezels above and below the display.

The ZenFone 6 still has a "chin" below the display, but the front of the device looks much cleaner design-wise, compared to the Pixel 3a XL. The back, well, that's a different story. The ZenFone 6 includes its flip-up camera setup which is not the prettiest around, in addition to a pill-shaped fingerprint scanner. The Pixel 3a XL has a circular fingerprint scanner, and a single camera located in the top-left corner of it back, and the back side of that phone looks a bit more appealing.

The ZenFone 6's panel is protected by a sheet of Gorilla Glass 6, while Google opted for the Asahi Dragontrail Glass protection on the Pixel 3a XL. Both of these displays are fairly good, they offer good viewing angles, and punchy colors, but the Pixel 3a XL's panel does a bit more in that regard, as it is an OLED display.

You will get those deep blacks on the Pixel 3a XL's display, and if you prefer OLED displays in general, this one probably won't disappoint. The ZenFone 6's display is HDR10 certified, though, unlike the Pixel 3a XL's.

IPS LCD panels on smartphones seem out of place in this day and age, well, at least as far as flagships are concerned. ASUS probably used one to cut costs, which is understandable, but we still prefer the OLED panel on the Pixel 3a XL, even though it's not exactly the best OLED displays we've seen.

ASUS' ZenUI 6 skin is actually quite close to stock Android, which managed to surprise many people. ASUS' Android skins used to be quite heavy, but that's no longer the case, and that's a good thing. The Pixel 3a XL, on the other hand, ships with stock Android.

The ZenFone 6 is a much more powerful device in terms of specs, though, it comes with the Snapdragon 855 64-bit octa-core processor, which is the most powerful chip by Qualcomm at the moment. In addition to that, you get to choose between 6GB and 8GB RAM variants here.

The Pixel 3a XL, on the other hand, is fueled by the Snapdragon 670 64-bit octa-core processor, one of Qualcomm's mid-range chips. That chip cannot compare to the Snapdragon 855, it's not even close in terms of sheer power, while the Pixel 3a XL comes with 4GB of RAM only, that's the only option.

Now, the performance itself is good on both devices, but you will notice that the ZenFone 6 is faster if you get a chance to use both devices. App opening times are much faster on the ZenFone 6, same goes for multitasking, and so on. Not to say that the Pixel 3a XL is a slow phone or anything of the sort, it's still more than enough for most people, but the ZenFone 6 has the edge in this category, definitely.

Both of these devices utilize fairly large battery packs, the ZenFone 6 comes with a 5,000mAh battery, while the Pixel 3a XL utilizes a 3,700mAh unit. The Pixel 3a XL's display is a bit smaller, but the ZenFone 6 can still provide you with more battery juice during the day, that's for sure.

ASUS opted to include a fairly large battery in the ZenFone 6, larger than most other smartphone manufacturers included in their flagship offerings, that's for sure. Due to the power efficient Snapdragon 855 SoC, not-heavy software on the ZenFone 6, and that huge battery, you're getting one of the best flagship devices in terms of battery life here.

It is worth noting that both devices will be more than enough in this regard for most people, though. Both phones offer fast battery charging, in fact, you're getting 18W fast charging on both phones.

Neither of these two devices offer wireless charging, but the ZenFone 6 does offer wired reverse charging, just in case you need a power bank while you're on the go, to charge your headphones or something of the sort. The ZenFone 6 wins this category, without a doubt.

The Google Pixel 3a XL will provide you with more saturated, and in a number of occasions less realistic photos, but they're better overall. Pictures taken with the Pixel 3a XL will end up looking sharper in most occasions, and the device is better in taking low light photos as well.

The ZenFone 6 does provide you with a better selfie camera(s), though, as it uses both of its rear-facing cameras as front-facing ones. The phone also has an auto panorama mode, in which it will use its rotating mechanism in order to take a panorama shot on its own. Still, if you're buying a phone for its camera, the Pixel 3a XL is the way to go.

So, what about audio? Well, both devices offer stereo speakers, and a headphone jack, which is great, but if you're getting the phone for audio, the ZenFone 6 may be a better choice. The phone comes with DTS Headphone X support, and can provide with 24-bit/192kHz audio.

If you just want a better phone overall, as we said, it's hard to argue that the ZenFone 6 is it, especially considering it's not that much more expensive than the Pixel 3a XL, at all. So, it's up to you, it all depends on what you're looking for in a phone.