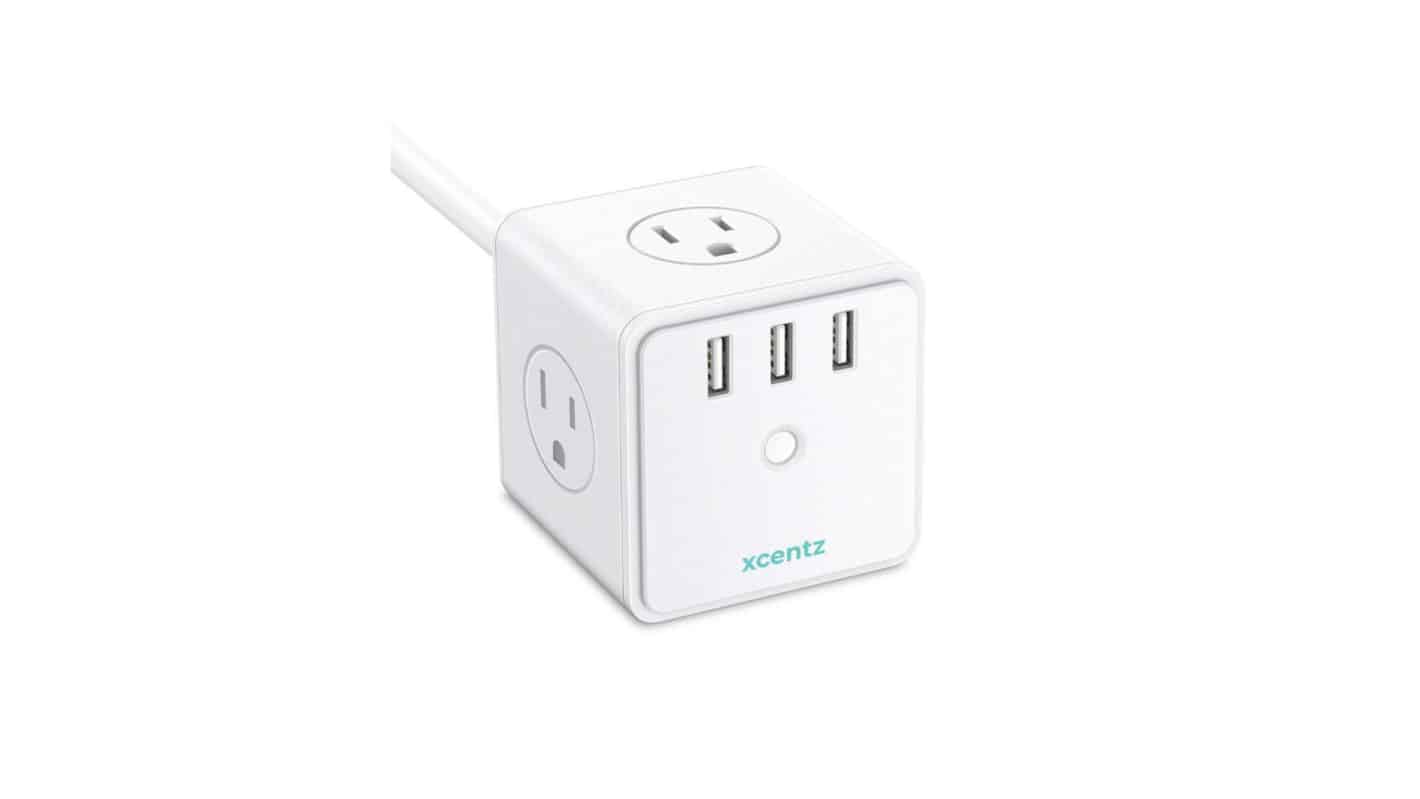 Xcentz recently launched a new power strip, the Xcentz Cube Power Strip. It is a decently priced power strip which has three USB-A ports and four AC outlets. Allowing you to plug in everything, using just one wall outlet.

This power strip is cube shaped, which not only looks great, but it also means that none of the AC outlets will be covered by a plug for something like a laptop or a router. Which usually have larger plugs, and can be a problem for those power strips that are just strips, and not in different shapes like a cub – like this one here.

The three USB-A ports are on the front of the cube, which makes it easier to use and charge things like your smartphones and tablets. Each port does 2.4A current, which is not Quick Charge 3.0 or USB-C PD speed, but it will be about the same as Quick Charge 2.0. For most smartphones, that's going to be plenty fast though, especially if you are only charging at night. It should be able to fully charge a 4,000mAh capacity battery in about two hours. Which isn't too slow, but it's not super fast either.

By making this power strip a cube, it also keeps the size pretty small, even though there are plenty of ports available. It's about 2.6-inches by 2.6-inches on all sides. Which means that it can sit in a corner on your desk and not get in the way. Having power on your desk is definitely a nice thing to have these days, especially with so many devices needing power.

In other words, this is about the size of a rubik's cube. It's also very portable, and a great power strip to take with you when traveling.

When it comes to safety, Xcentz has you covered. The Cube Power Strip has a rubber-coated power cable, with a fire-retardant casing. This means that if it does catch on fire, it won't spread, like other power strips might. It also has overload protection, which helps combine for a much safer experience using this power strip. Definitely a good thing these days, with batteries getting larger, and using more and more power to charge them.

Those that do look at "cheap" power strips are always worried about the safety of these power strips. So it's good to see that Xcentz didn't forget to make it a pretty safe power strip.

The Xcentz Cube Power Strip is available on Amazon right now, for just $23.99. For a power strip that has four AC outlets and three USB-A ports, this is a pretty good price. It's only available in white, but there are a couple of designs for the front (where the USB-A ports reside), which look pretty nice. This includes the Grids and Lattice designs. Unfortunately there is no black color, but the white one won't show scratches as easily as a black one would.

You can pick up the Xcentz Cube Power Strip from Amazon for $23.99 using the link below.

Advertisement
Xcentz Cube Power Strip - Amazon - $23.99
Advertisement
Trusted By Millions
Independent, Expert Android News You Can Trust, Since 2010
Publishing More Android Than Anyone Else
25
Today
144
This Week
399
This Month
5143
This Year
106618
All Time
Advertisement