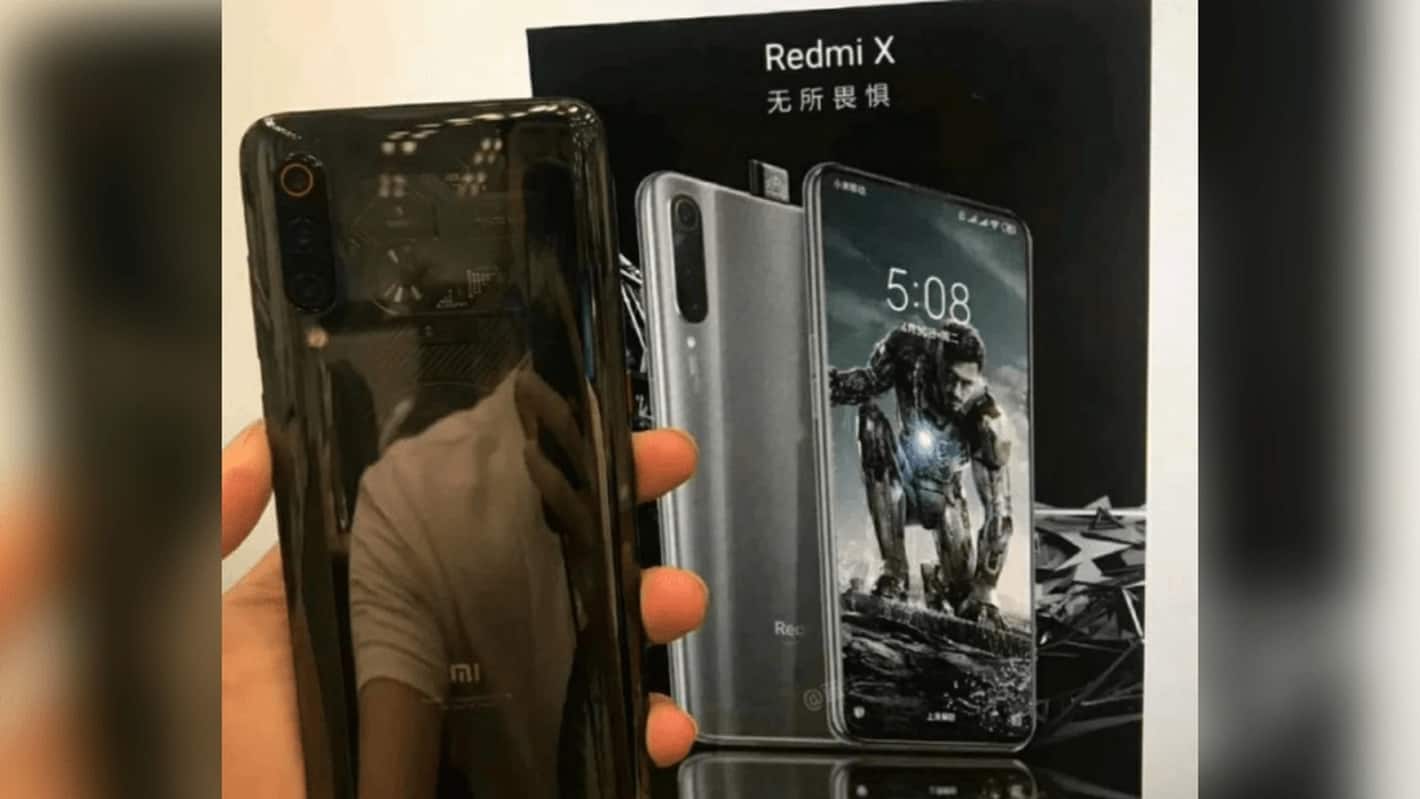 UPDATE: Redmi’s CEO says that the Redmi X won’t be the name of the company’s flagship.

As you can see, the provided image shows both the real-life image of the phone’s back side, and a poster which reveals the design of both its front and back sides (renders). As expected, the Redmi X will be made out of metal and glass, and it will ship with three vertically-aligned cameras on the back. A see-through variant will be available, same as with the Xiaomi Mi 9.

The phone’s rear-facing cameras will be placed in the top-left corner of the phone’s back side, while an LED flash will sit below them. It is worth noting that the three cameras will also protrude on the back, as they do on pretty much every flagship phone these days.

The provided image also reconfirms that the device will not include a display hole or a notch, as Redmi opted to include a pop-up selfie camera instead. Both the phone’s front and back sides will be curved, and it seems like the device will actually ship with a slightly curved display, at least it looks curved in the provided image. It is possible that this is only a curved piece of glass on top of the Redmi X’s display, though, we’ll see.

The phone’s bezels are basically non-existent. Its “chin” is there, but it’s so thin that it’s almost not even worth mentioning, while the rest of the bezels are even thinner. The provided image is not sharp enough, but it does seem like an earpiece will be built into the phone’s frame above the display. Redmi’s branding will be imprinted on the back of the phone, while this seems to be a silver variant of the device.

You will also notice that Iron Man is placed on the phone’s display here, which is not surprising considering one Avengers-related leak with this phone already surfaced. It is possible that the company will release a special version of the phone that will contain some Avengers materials on it, and quite possibly even include Avengers branding, but we’ll see.

The Redmi X will be fueled by the Snapdragon 855, that much had been confirmed by the company. The device will ship with Android 9 Pie, on top of which you’ll be able to find Xiaomi’s custom Android UI, MIUI 10.

One of the cameras on the back of this phone is expected to be a 48-megapixel unit that was used by the HONOR View20 thus far, and also the Xiaomi Mi 9. That will be the phone’s main camera, and in addition to that, the Redmi X is rumored to ship with an 8-megapixel telephoto camera, and a 13-megapixel ultra wide-angle unit. We still do not know what camera will the company use for selfies.

That is pretty much all the info that we have thus far. The Redmi X is expected to become official in the near future, but the company still did not announce its press conference, or anything of the sort.