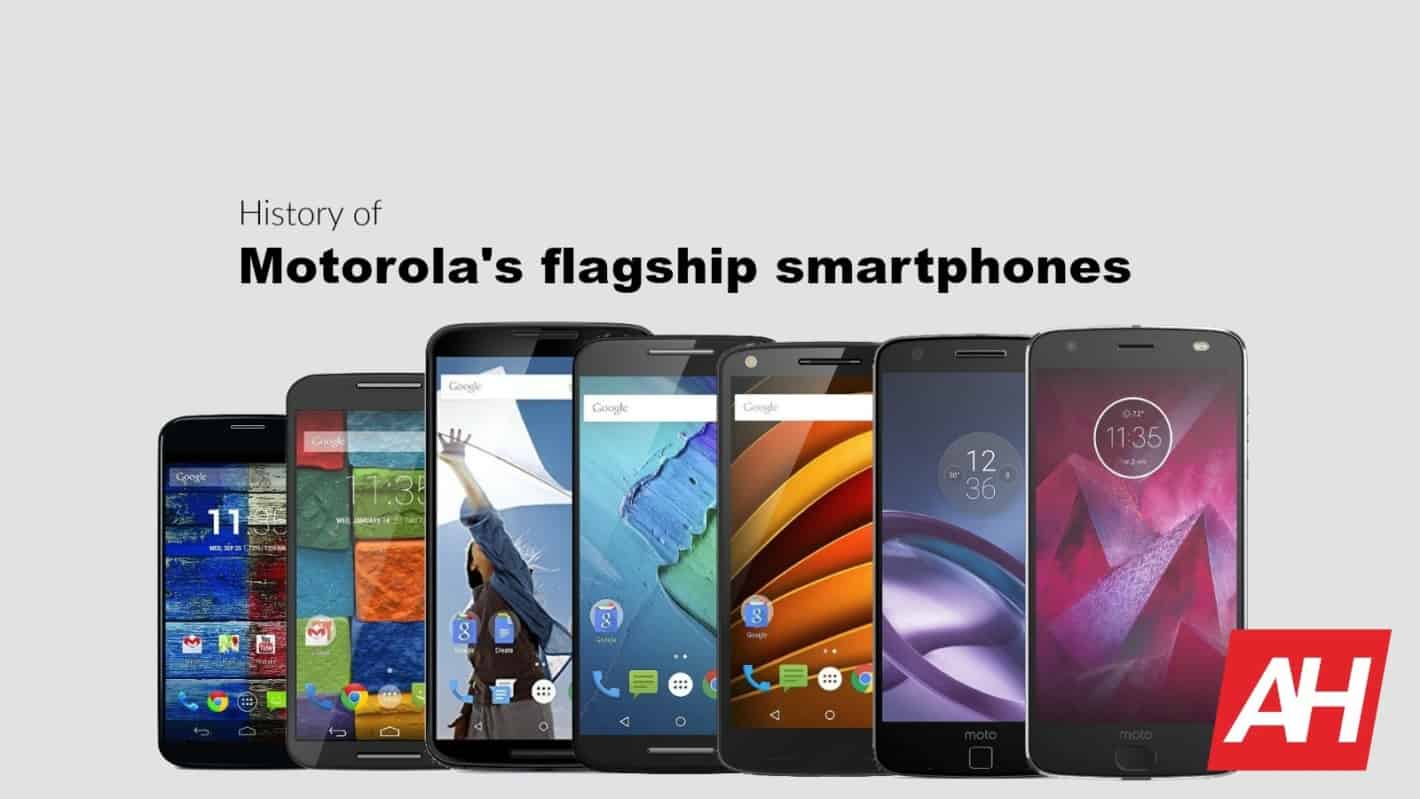 The company has been changing the name of its for quite some time now, so we'll focus on their flagships in general in this article, regardless of their names. We will focus on phones that not locked to a single carrier, in other words, are not made solely for one carrier.

Having said that, we'll kick this list off with the Motorola Moto X from 2013, which is the first phone that the company announced after Google took over. We'll go all the way to the company's newest phone, and add new ones as they get announced.

The Motorola Moto X was the first flagship handset from the company after Google took over the company. This handset was announced back in August 2013, and it is made out of polycarbonate. Despite that, however, it does not feel cheap. Android 4.2.2 JellyBean came pre-installed on this handset, while the phone got upgraded to Android 5.1 Lollipop at some point, that was its last Android update.

The Moto X features a 4.7-inch HD AMOLED display, while it is fueled by the Snapdragon S4 Pro dual-core processor. The device includes 2GB of RAM and 16GB / 32GB / 64GB of non-expandable storage. A single 10-megapixel camera is included on the back of the Moto X, while an 8-megapixel camera can be found on the phone's front side. A 2,200mAh battery sits on the inside of this phone, and that battery is not removable.

Following a rather solid response to the Moto X, Google opted to release the Moto X (2nd-gen) a year after the Moto X arrived. This phone got announced in September 2014, and it offers a frame made out of metal, and interchangeable backplates. Android 4.4.4 KitKat shipped out of the box on the Moto X (2nd-gen), while the device did get an update to Android 6.0 Marshmallow at one point.

The Moto X (2nd-gen) features a 5.2-inch fullHD display, 2GB of RAM and 16GB / 32GB / 64GB of storage (non-expandable). The Snapdragon 801 quad-core SoC fuels the Moto X (2nd-gen), while the device includes a single 13-megapixel camera on the back. A 2-megapixel unit is included on the phone's front side, while a 2,300mAh non-removable battery is also a part of the package. The phone supports 15W Quick Charge 2.0 fast wired charging.

The Motorola Nexus 6 was announced in October 2014, and it was not technically Motorola's flagship, but Google's. Still, we opted to include it on this list, as Motorola is its manufacturer, and it did carry the company's name and logo. The Nexus 6 is actually quite a large phone, and at the time of its release, it was considered to be huge. It sports a 5.96-inch display, but due to bezels and display aspect ratio (16:9), it is 83mm wide, and 159.3mm tall.

The Nexus 6 sports an AMOLED display, and the device is water resistant. The Snapdragon 805 quad-core processor fuels this phone, while the device sports 3GB of RAM and 32GB / 64GB of storage (non-expandable). A 13-megapixel camera is placed on the back of this phone, while a 2-megapixel unit sits on its front side. The Nexus 6 includes front-facing stereo speakers, and a 3,220mAh battery.

The Motorola Moto X Style was announced in July 2015, and was later re-announced with stock Android under the Motorola Moto X Pure name. The Moto X Style arrived with stereo speakers, and it shipped with Android 5.1.1 Lollipop. Android 7.0 Nougat is the last update that arrived to this phone. The device is splash and dust resistant, while it includes a single camera on the back.

The Moto X Style features a 5.7-inch QHD IPS LCD display, 3GB of RAM and 16GB / 32GB / 64GB of expandable storage. The phone is fueled by the Snapdragon 808 hexa-core processor, and a 3,000mAh battery. 15W fast battery charging is included here as well, while the phone sports a 21-megapixel camera on the back. A 5-megapixel selfie unit is also included in the package.

The Motorola Moto X Force (also known as the DROID Turbo 2 for Verizon) was announced in November 2015, and it is actually quite durable. The phone includes a front LED flash, and it shipped with Android 5.1.1 Lollipop out of the box. Motorola did push out Android 7.0 Nougat update for the device at one point, though, and that is the last update that landed on the Moto X Force. The phone features a 5.4-inch QHD AMOLED display, and it sports a 3,760mAh battery.

The device is fueled by the Snapdragon 810 octa-core processor, and it includes 3GB of RAM with either 32GB or 64GB of storage. The device includes a 3.5mm headphone jack, like its predecessors, and a 21-megapixel main camera sits on this phone's back. A 5-megapixel selfie camera can be found on the phone's front side, while Motorola also included 15W fast charging here, and Qi wireless charging.

The Motorola Moto Z was announced in June 2016, and it represented a change in terms of branding for the company. Along with it, Motorola also announced the Moto Z Force, which was extremely similar to the Moto Z, but it came with a larger battery, and a different rear-facing camera. There were some additional tiny differences, but these are the most notable ones. It is also worth noting that the two phones look the same, even though their dimensions are slightly different.

The Moto Z became the company's new flagship, technically replacing the Moto X Force which launched a year earlier. The Moto Z is made out of metal, and it sports a front-facing fingerprint scanner, which is located below the phone's display. The Moto Z also includes POGO pins on the back, so that it can connect to various accessories from the company.

The Moto Z features a 5.5-inch QHD AMOLED display, along with 4GB of RAM and 32GB / 64GB of expandable storage. The phone is fueled by the Snapdragon 820 quad-core processor, and it includes a 2,600mAh battery (3,500mAh on the Moto Z Force). On the back of the Moto Z lies a 13-megapixel camera (21-megapixel on the Moto Z Force), while a 5-megapixel unit can be found on its front side. Android 6.0.1 Marshmallow came pre-installed on the phone, while the last update this phone received came in form of Android 8.0 Oreo.

The Motorola Moto Z2 Force was announced about a year after the Moto Z, in July 2017. This phone is quite similar to the Moto Z in terms of the design, it is made out of metal, and it has a similar camera oreo on the back. The Moto Z2 also includes POGO pins on the back, while it sports a front-facing fingerprint scanner which sits below the phone's display. That fingerprint scanner is a bit larger than the one on the Moto Z, though.

The Moto Z2 Force sports a 5.5-inch QHD P-OLED display, 4GB / 6GB of RAM and 64GB / 128GB of expandable storage. Qualcomm's Snapdragon 835 octa-core processor fuels this phone, while the device includes a 2,730mAh battery which supports 15W fast charging. Two 12-megapixel cameras are included on the back of this phone, while you will find a single 5-megapixel camera on its front side.