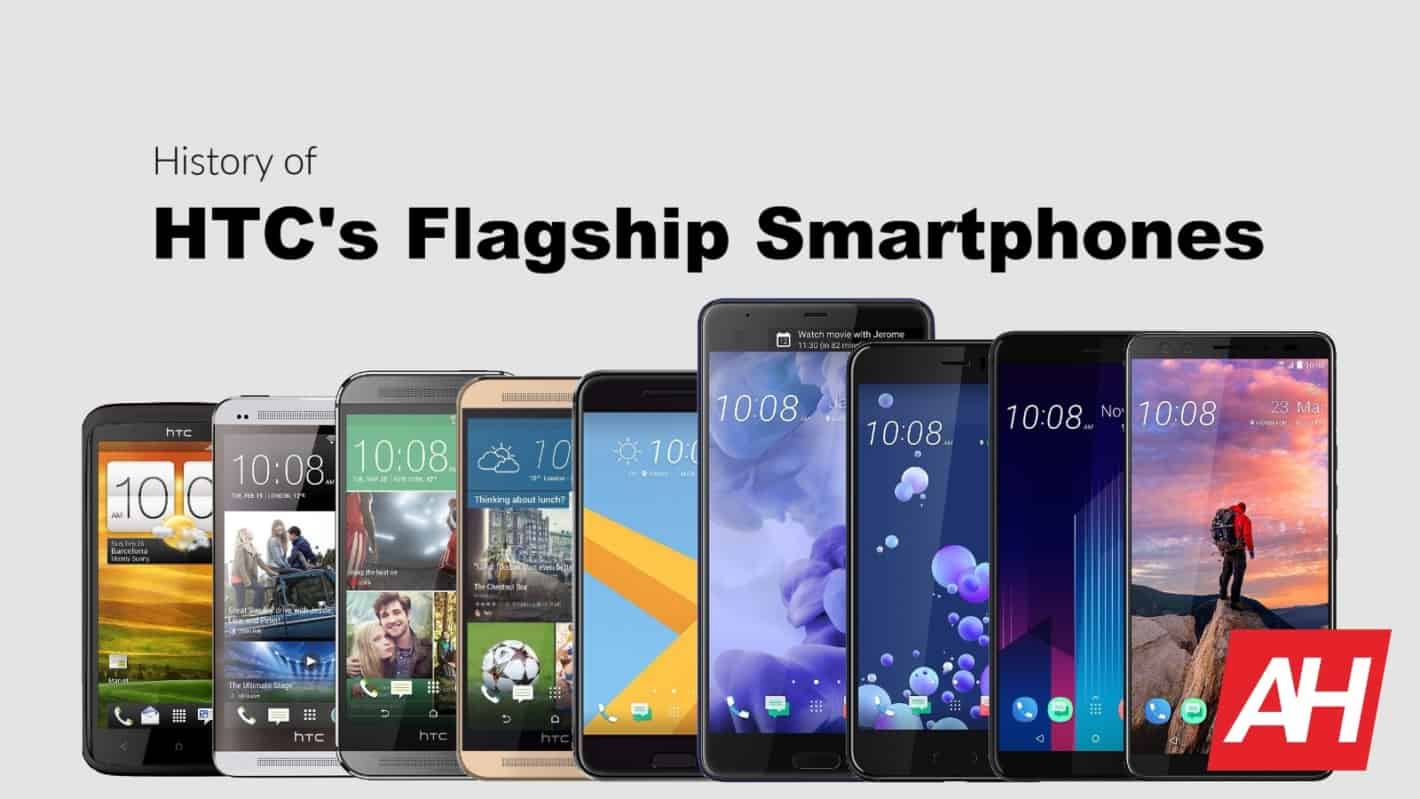 HTC had its ups and downs over the years, this company was once the third-largest smartphone manufacturer in the world, but it managed to lose its way at one point. That being said, HTC did release quite a few compelling smartphones over the years, and we’re here to take a look at the history of HTC’s crown jewels, its flagship devices.

We will start our timeline back in 2012 when HTC announced its One X flagship, a first true flagship smartphone, which was both regarded and marketed as such. Truth be said, HTC did announce a number of other compelling Android phones before it, like the HTC EVO 3D, Hero, and Nexus One, but the One X was the first true flagship offering, which is why we’ll start our overview with that phone.

HTC unveiled quite a few flagship phones after the HTC One X, and do note that this list will be updated when new devices get announced.

The HTC One X was announced back in February 2012, and it was quite refreshing in terms of the design back then. The phone offers a strong polycarbonate build, and it looked really nice overall back then. The phone includes capacitive buttons below the display, while HTC’s logo sits above the display. Android 4.0 Ice Cream Sandwich comes pre-installed on the HTC One X along with Sense UI (HTC’s Android skin), while Android 4.1.1 Jelly Bean is the last official update that reached the phone.

The One X is fueled by the NVIDIA Tegra 3 quad-core processor, and it features a 4.7-inch HD display. The phone includes a single 8-megapixel camera on the back, while a 1.3-megapixel camera sits on its front side. A 1,800mAh battery is also included in this package, while the device has a 3.5mm headphone jack, and Beats Audio support. The phone also comes with 1GB of RAM and 16GB / 32GB of non-expandable storage.

The HTC One (M7) is actually considerably different than the One X in terms of the design. This is HTC’s very first metal-clad flagship, and it was announced in February 2013. The phone includes front-facing stereo speakers, while the company’s logo sits below the display. This phone actually includes two capacitive keys below the display, and back in the day, it was actually one of the best-looking phones around.

The device is fueled by the Snapdragon 600 quad-core SoC, and it sports a 4.7-inch fullHD Super LCD3 display. The One M7 includes 2GB of RAM and 32GB / 64GB of non-expandable storage, while a 2,300mAh battery is also a part of the package. Android 4.1.2 Jelly Bean came pre-installed on the device, while Android 5.0 Lollipop is the last Android version that reached this smartphone.

The HTC One (M8) is actually quite similar to its predecessor in terms of the design, and it got announced in March 2014. This phone is made out of aluminum, and front-facing stereo speakers have made a comeback here. Unlike on the HTC One (M7), though, you’re getting three on-screen navigation buttons here, below which is quite a thick bezel containing HTC’s logo and one of the aforementioned speakers.

Android 4.4.2 KitKat came pre-installed on this phone, while Android 6.0 Marshmallow is the last Android version that landed on the phone. The device is fueled by the Snapdragon 801 quad-core processor, while a 5-inch fullHD display is also a part of the package. Two 4-megapixel cameras are included on the back of the HTC One (M8), while a 5-megapixel unit sits on the phone’s front side.

The HTC One M9 was announced in March 2019, and it came with a very similar design language to the One M7 and One (M8). On-screen buttons from the One (M8) remained here, and the same can be said for the front design of the device, as it’s really difficult to differentiate the two. Some changes did occur on the back, though, as HTC opted for a single 20-megapixel rear-facing camera, this time around.

The device features a 5-inch fullHD Super LCD3 display, 3GB of RAM and 32GB of expandable storage. Qualcomm’s Snapdragon 810 octa-core processor fuels this phone, while the device sports a 2,840mAh battery with Quick Charge 2.0 fast charging. Stereo speakers are once again present on the front, while Android 5.0 Lollipop camera pre-installed on this phone, but the device did receive Android 7.0 Nougat eventually, that was the last version of Google’s OS that landed on the phone.

The HTC 10 presented a step away from the design language HTC has been using for years before it, and it was announced in April 2016. This device is made out of metal, but it is considerably different in terms of the design compared to its predecessors. The phone includes a capacitive home key which doubles as a fingerprint scanner, and two capacitive keys on the sides. Thick top and bottom bezels are present here, while a single camera sits on the phone’s back side.

The HTC 10 features a 5.2-inch QHD Super LCD5 panel, 4GB of RAM and 32GB / 64GB of expandable storage. The phone is fueled by the Snapdragon 820 quad-core processor, and it still includes stereo speakers, and a 3.5mm headphone jack. A 3,000mAh battery is included in the package, along with Quick Charge 3.0 fast charging. Android 6.0.1 Marshmallow came pre-installed on the HTC 10, but the company eventually pushed Android 8.0 Oreo to the phone.

HTC introduced the HTC U Ultra in January 2017, and it is fueled by a slightly boosted variant of the Snapdragon 820, the Snapdragon 821. That device was a bit larger than the HTC 10 thanks to its 5.7-inch display, but the design was not exactly changed by much. The HTC U Ultra was technically the company’s flagship until HTC U11 arrived several months later.

The HTC U11 got announced in May 2017, and it does resemble the HTC 10 quite a bit, except for the fact the company opted for a glass + metal design this time around. The same navigation button setup remained from the HTC 10, and the phone includes a single camera on the back. Top and bottom bezels are a bit thinner on this phone compared to the HTC 10, but not by much, actually.

The phone is fueled by the Snapdragon 835 octa-core SoC, while it includes 4GB / 6GB of RAM and 64GB / 128GB of expandable storage. A 5.5-inch QHD Super LCD5 display is included here, and the same goes for a 3,000mAh battery, which supports Quick Charge 3.0 fast charging. A 16-megapixel camera sits on the back of this phone, while the device includes stereo speakers. This phone shipped with Android 7.1 Nougat, but Android 9 Pie did land on it eventually.

The HTC U11+ was announced in November 2017, and it is fueled by the same SoC as the HTC U11+. The phone replaced the front-facing fingerprint scanner for a rear-facing one, opted for on-screen buttons, and much thinner top and bottom bezels. The HTC U11+ is still made out of metal and glass, though.

The HTC U11+ features a bigger display than the HTC U11, as it includes a 6-inch QHD+ panel. The device is fueled by the Snapdragon 835, while it includes 4GB / 6GB of RAM and 64GB / 128GB of expandable storage. A 12-megapixel camera sits on the back of this phone, while Android 8.0 Oreo came pre-installed on the device. HTC also included a 3,930mAh battery, with Quick Charge 3.0.

The HTC U12+ trimmed down bezels even further compared to its predecessor, but it retained that glass + metal build. The HTC U12+ was announced in May 2018, and it includes on-screen buttons, and a rear-facing fingerprint scanner. Android 8.0 Oreo came pre-installed on the device, while the phone also includes two front-facing cameras, and has the same display size as the HTC U11+.

This smartphone features a 6-inch QHD+ Super LCD6 display, it is IP68 certified for water and dust resistance, and fueled by the Snapdragon 845 octa-core SoC. 12 and 16-megapixel cameras are included on the back of this phone, while two 8-megapixel units sit on its front side. A 3,500mAh battery is also a part of this package, along with Quick Charge 3.0 fast charging by Qualcomm.