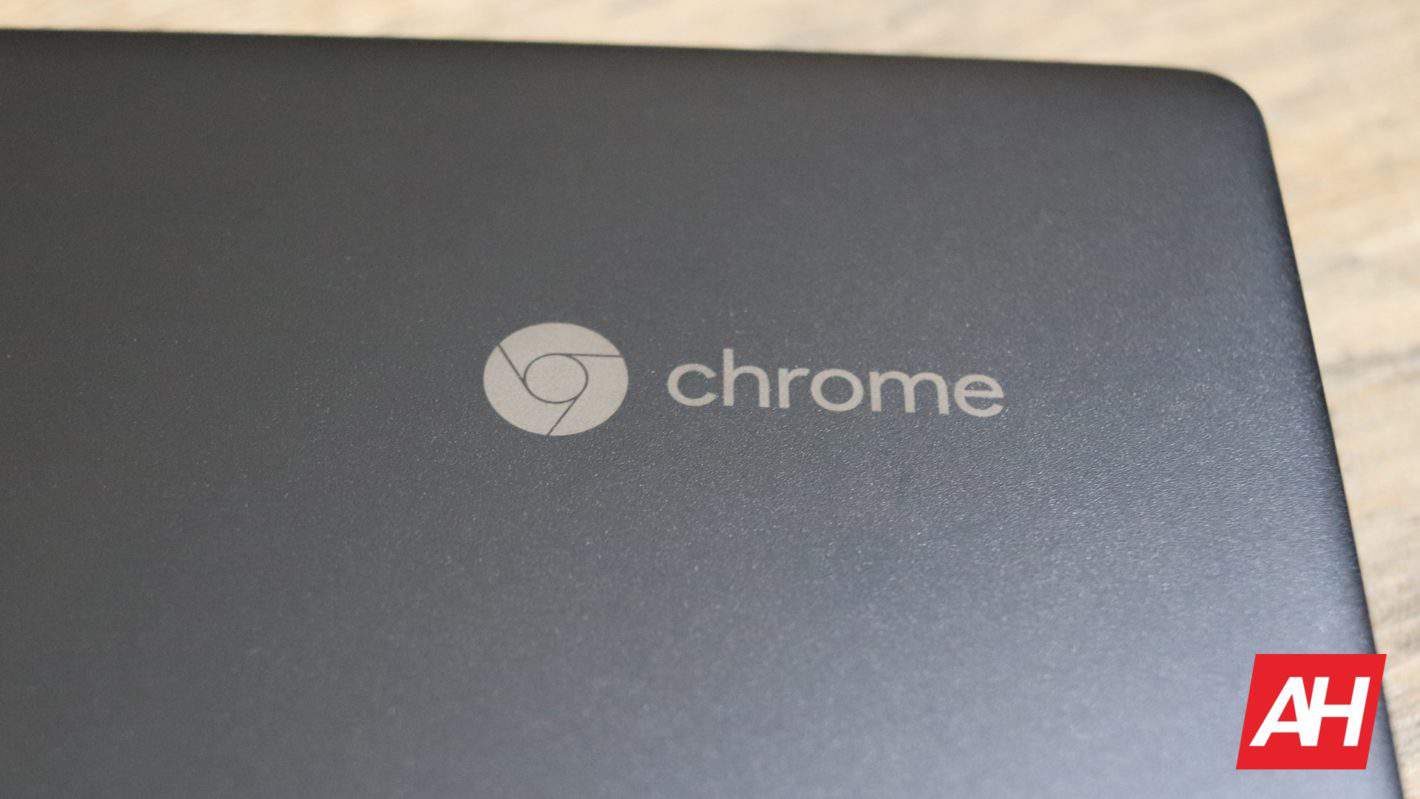 Chrome OS updates arrive frequently and ordinarily with a plethora of new features to suit a number of needs but that doesn’t mean every feature will arrive within the same timeframe, with some staying in the beta release “Channels” for months or years. Those experimental and often buggy versions of the firmware are not necessarily for everyone, which is why the Chromebooks and Chromeboxes running the operating system ship on the “Stable Channel” by default.

For those willing to brave those relatively unstable versions of the firmware that ship well ahead of consumer variants, moving between Channels to gain access to unreleased features is easy enough but not without consequence.

Not only do those channels introduce bugs. Features and improvements sometimes move in and out of public availability across the board — until they land on the consumer-ready Stable Channel — while others get buried beneath flags found in Google’s “chrome://flags” menu for experimental features.

The final caveat users will need to be comfortable with before starting is the fact that returning from the beta channels to Stable also requires a powerwash of Chrome OS. That will erase all local data and all sites will need to be signed back into.

Now, there is an even more unstable variant of Chrome OS on the “Canary Channel” but that’s best avoided and isn’t shown as an option because of that. Various guides exist online for getting to that channel, which requires accessing the shell during start-up, turning off certain validation checks, and running command lines. We won’t be covering that here.

The first step into the experiment — Beta Channel

Moving between every Channel, with the exception of the most experimental Canary Channel, follows almost exactly the same process and the first step away from Stable Channel Chrome OS is the Beta Channel.

In each case, users will start by clicking on the small pill-shaped UI at the bottom-right-hand side of the launcher shelf — where the time, battery, and connectivity icons are shown — before proceeding to click the ‘gear’ icon to access settings. Conversely, clicking on the settings app in the launcher drawer itself will take users to the same place.

On the Settings page, users will see a three-dash icon at the top-left-hand side of the UI. A click on that brings forward a sorted list of categories for settings. The setting that users will need to click is below a separating line at the bottom of that list and labeled “About Chrome OS”. The subsequent page has multiple sections shown as collapsible cards, with a top card showing which version and Channel of the OS the Chromebook or Chrome OS gadget is running. 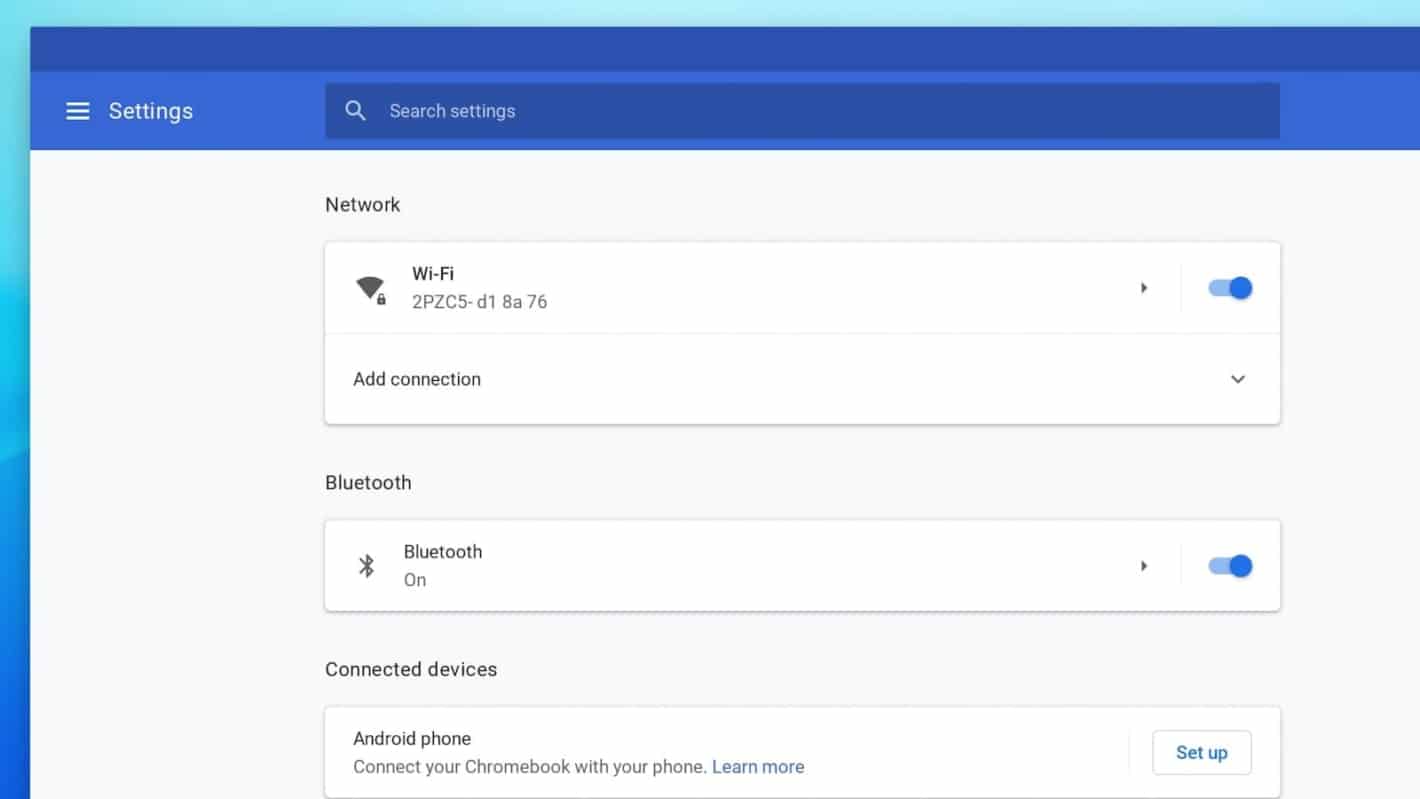 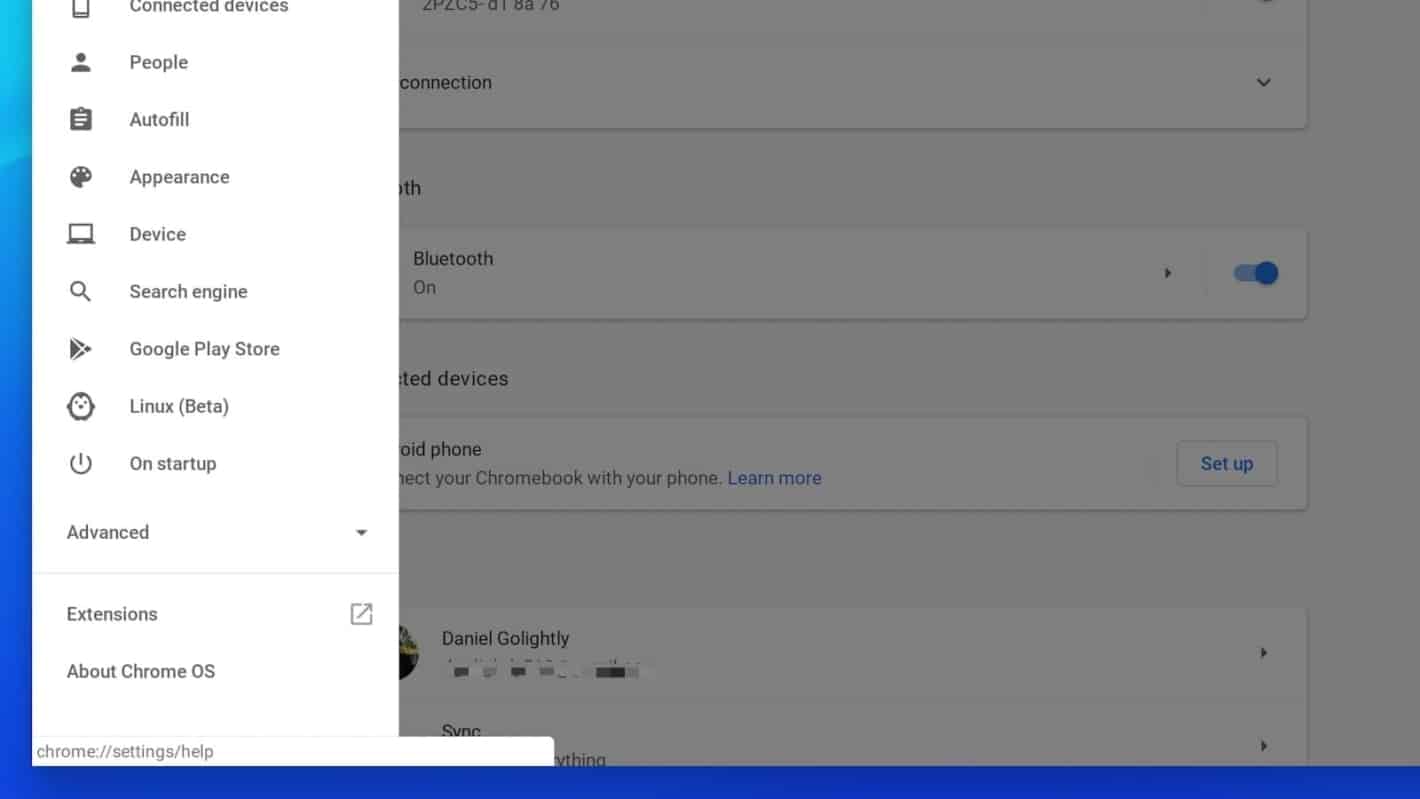 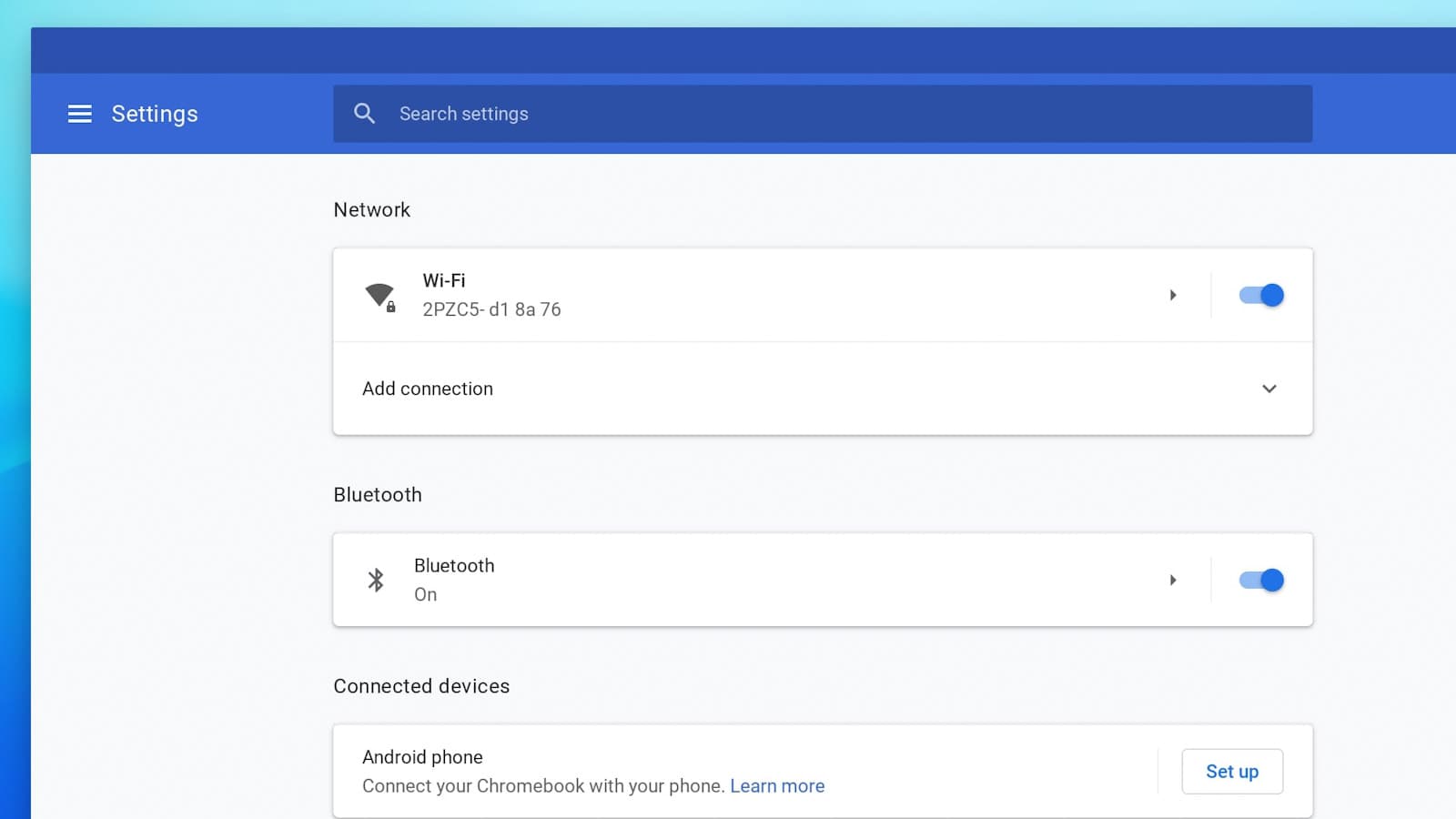 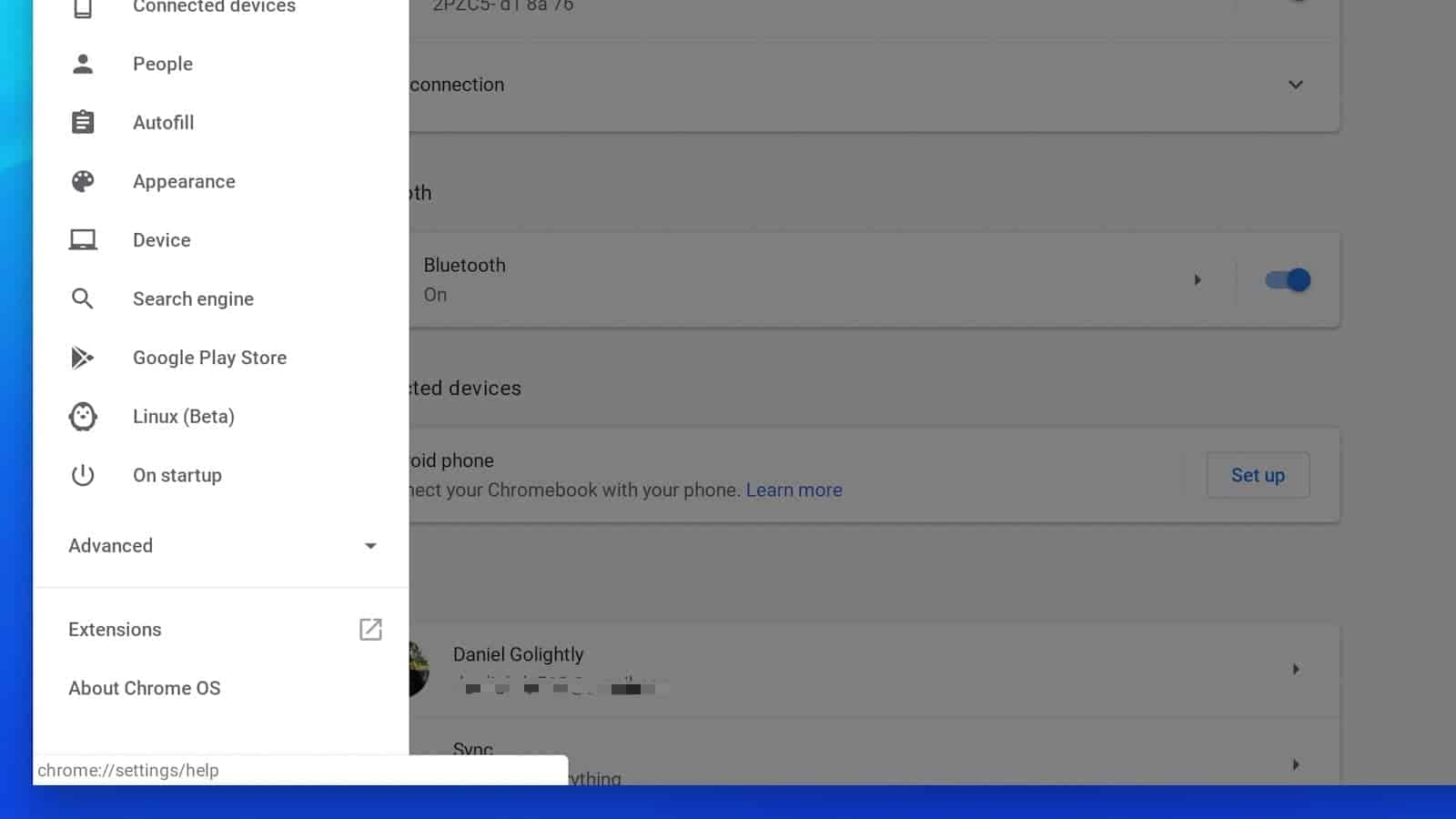 The third card from the top of the page is labeled “Detailed build information” and a click on that will reveal a wealth of platform, firmware, version, and command line information that can generally be ignored by the average user. The “Channel” section of the UI will additionally show a square-shaped button that reads “Change channel” with circular Radio-button options to select “Stable,” “Beta,” or “Developer-unstable.”

Clicking on any option other than the current one will bring forward a new button to “Change channel.” To switch to the Beta Channel, that option needs to be selected and then clicking that will start the process. 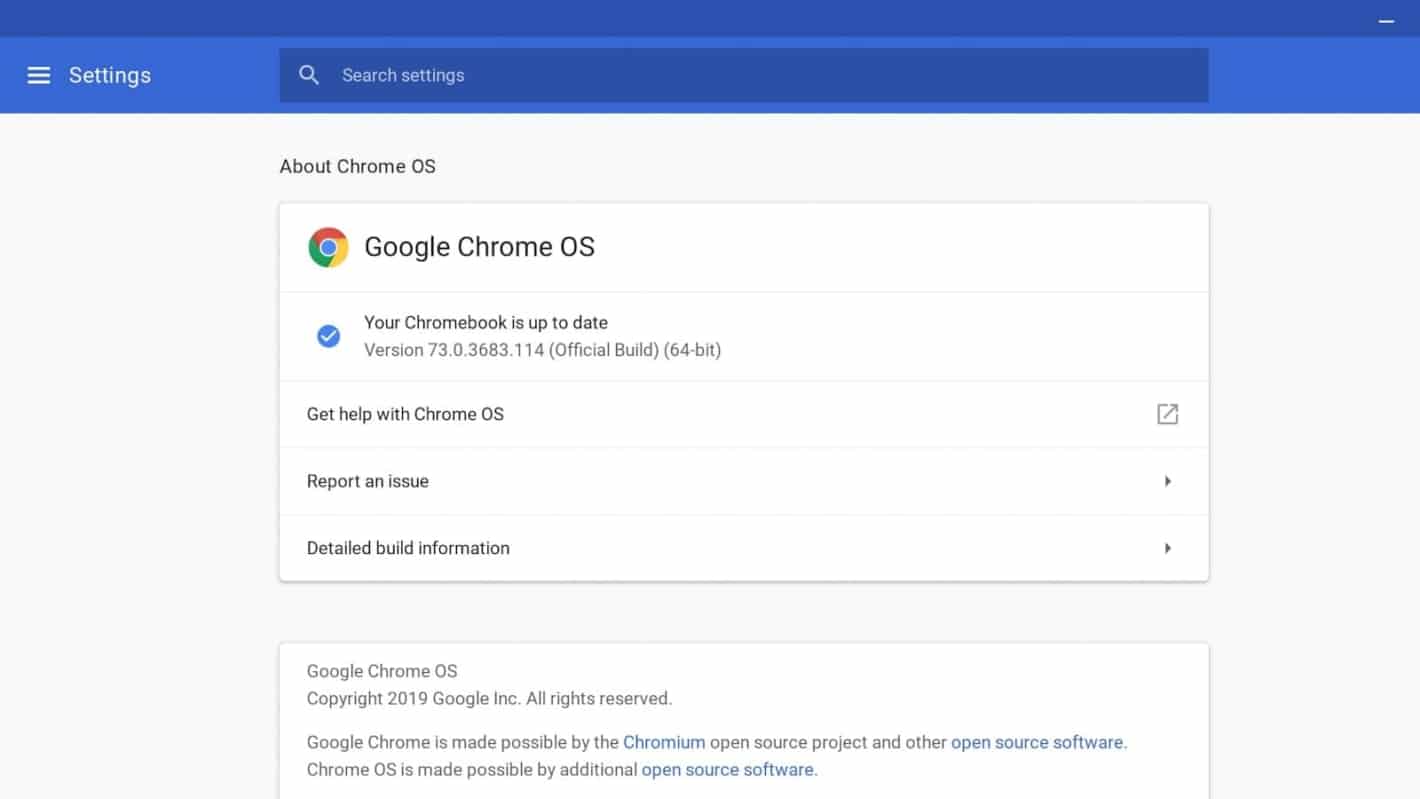 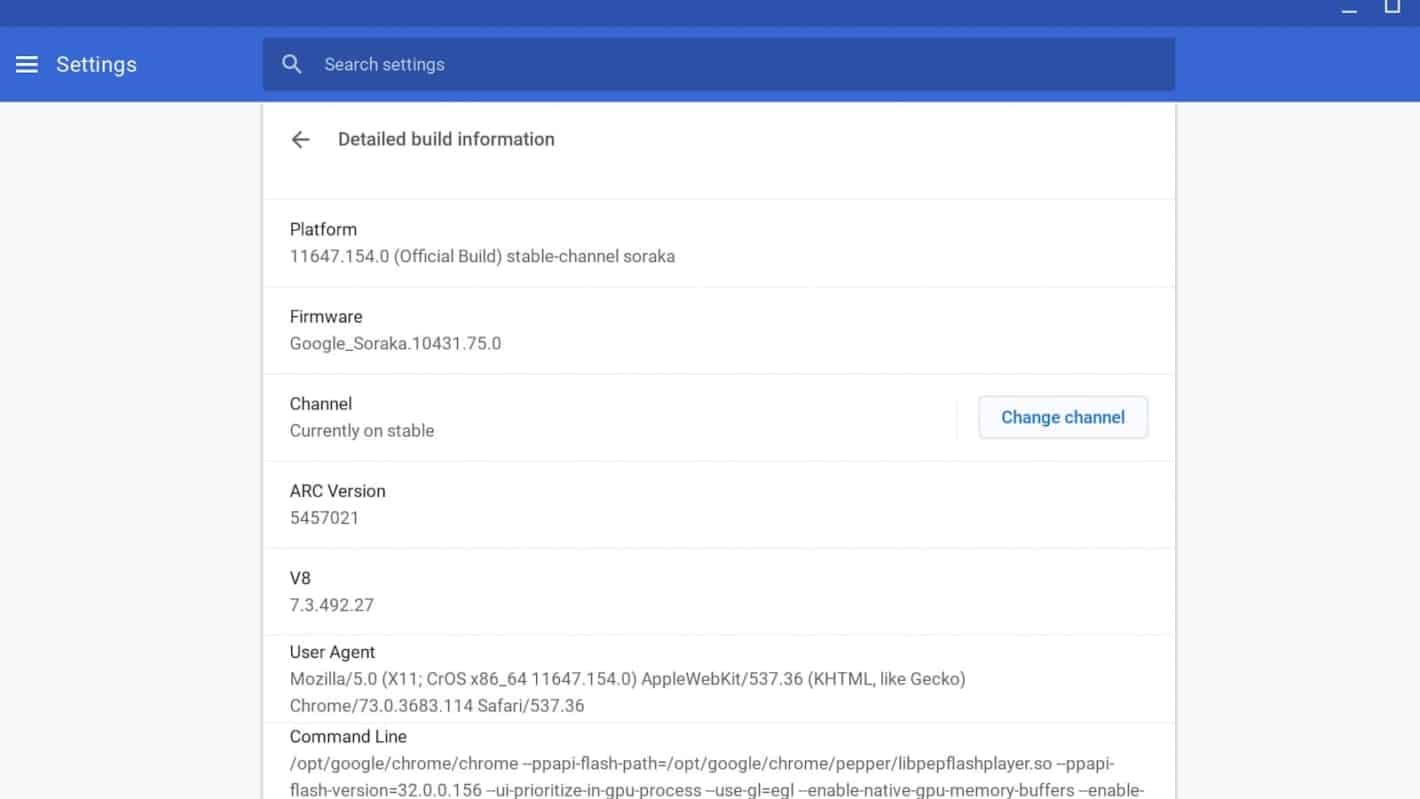 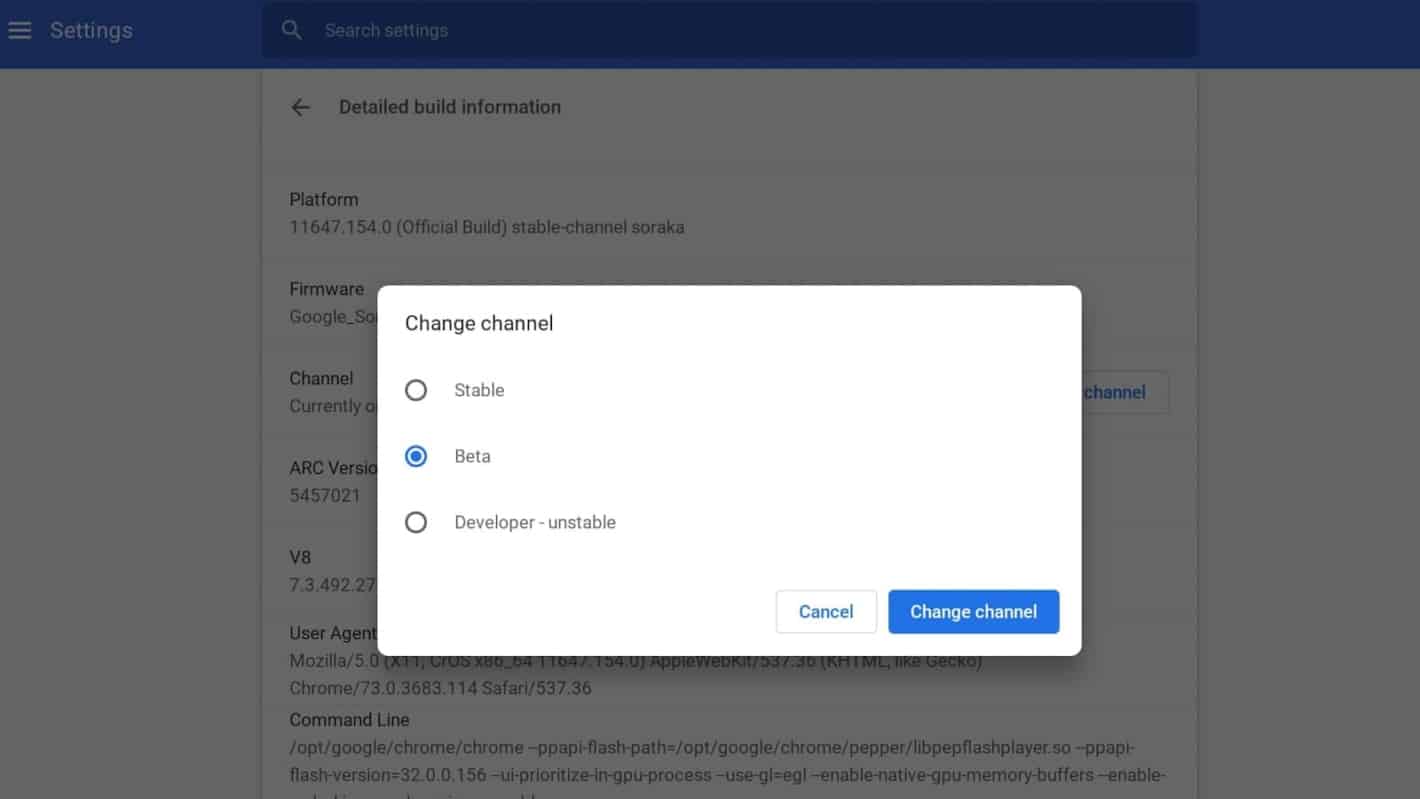 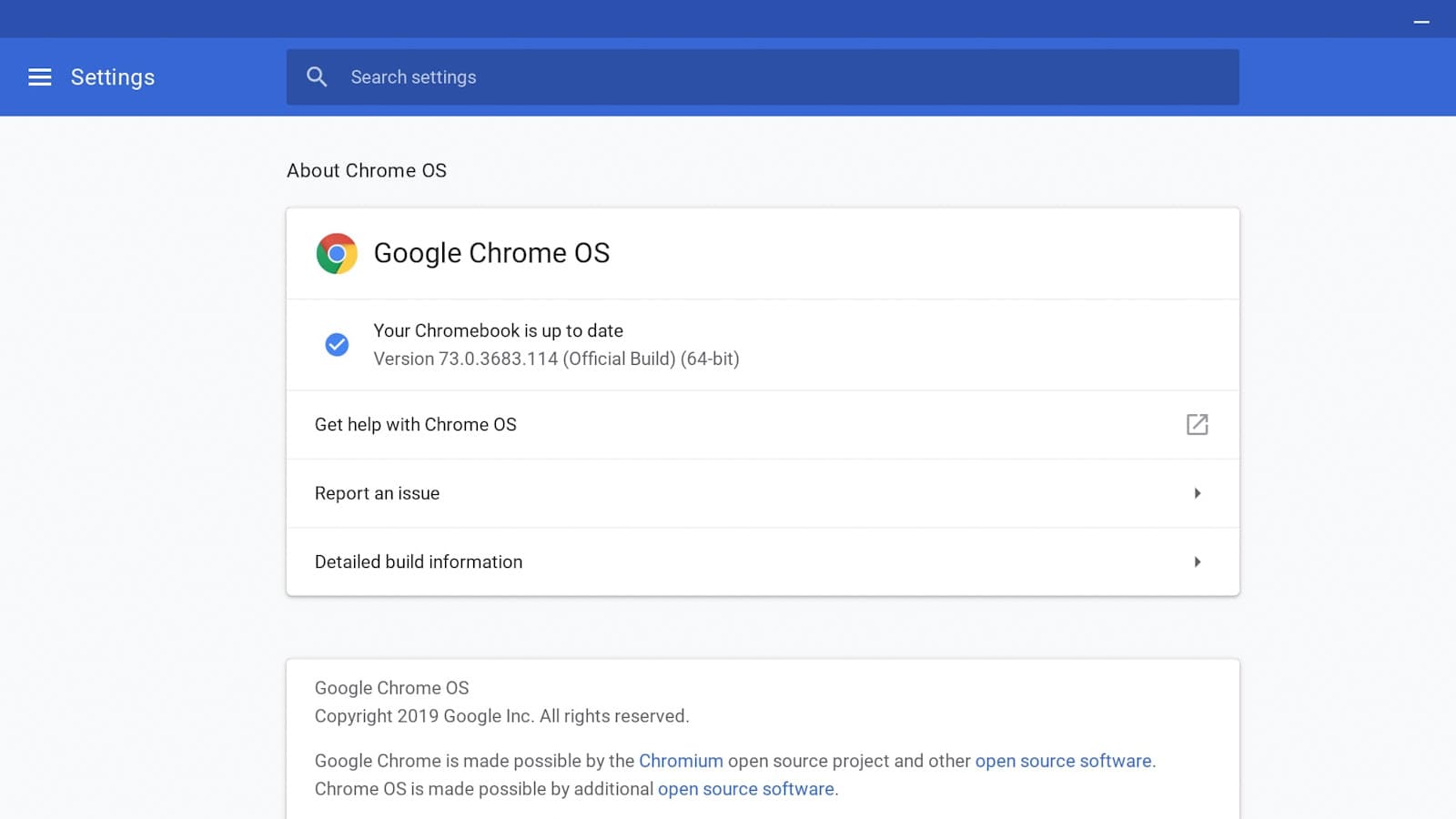 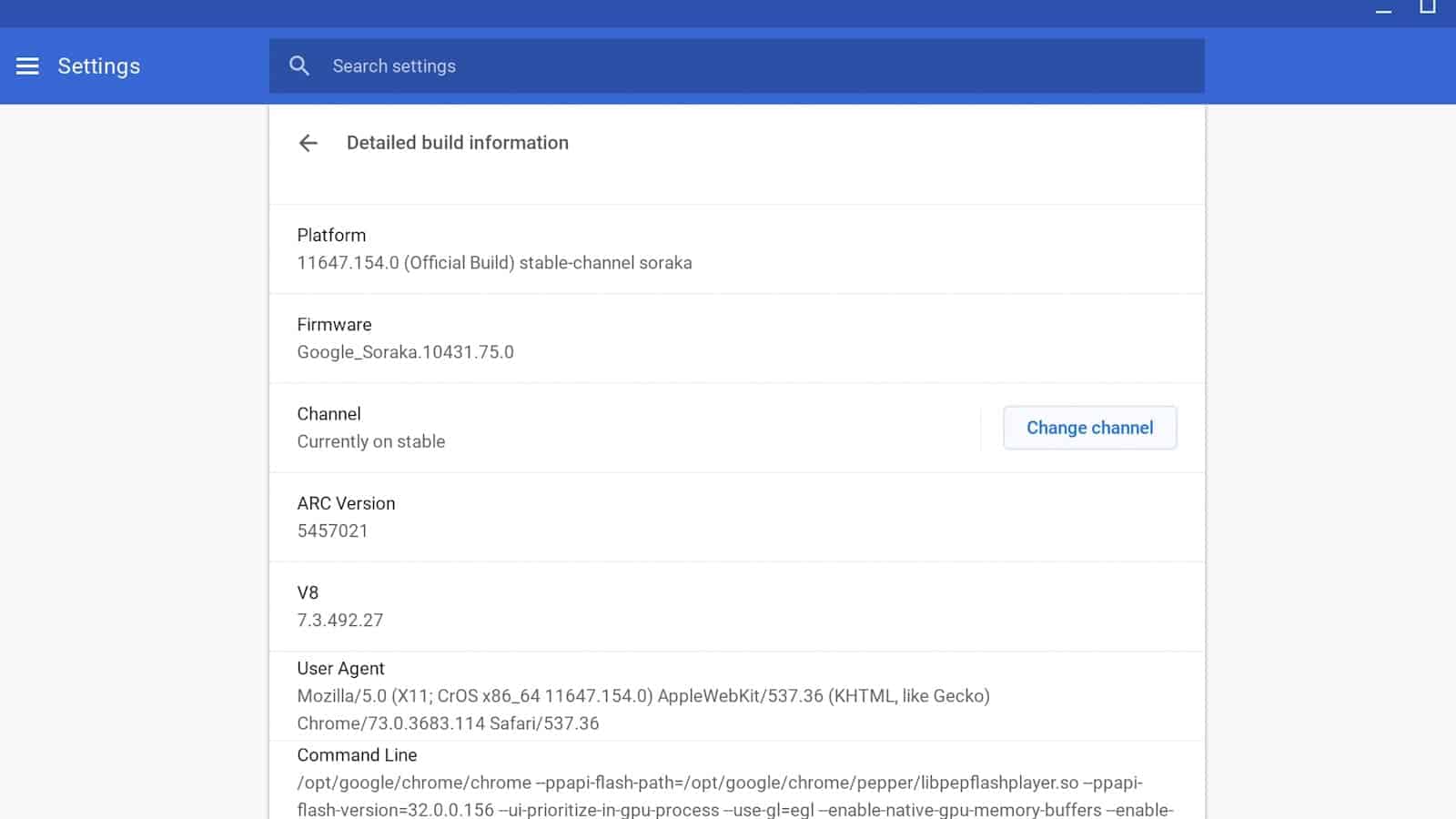 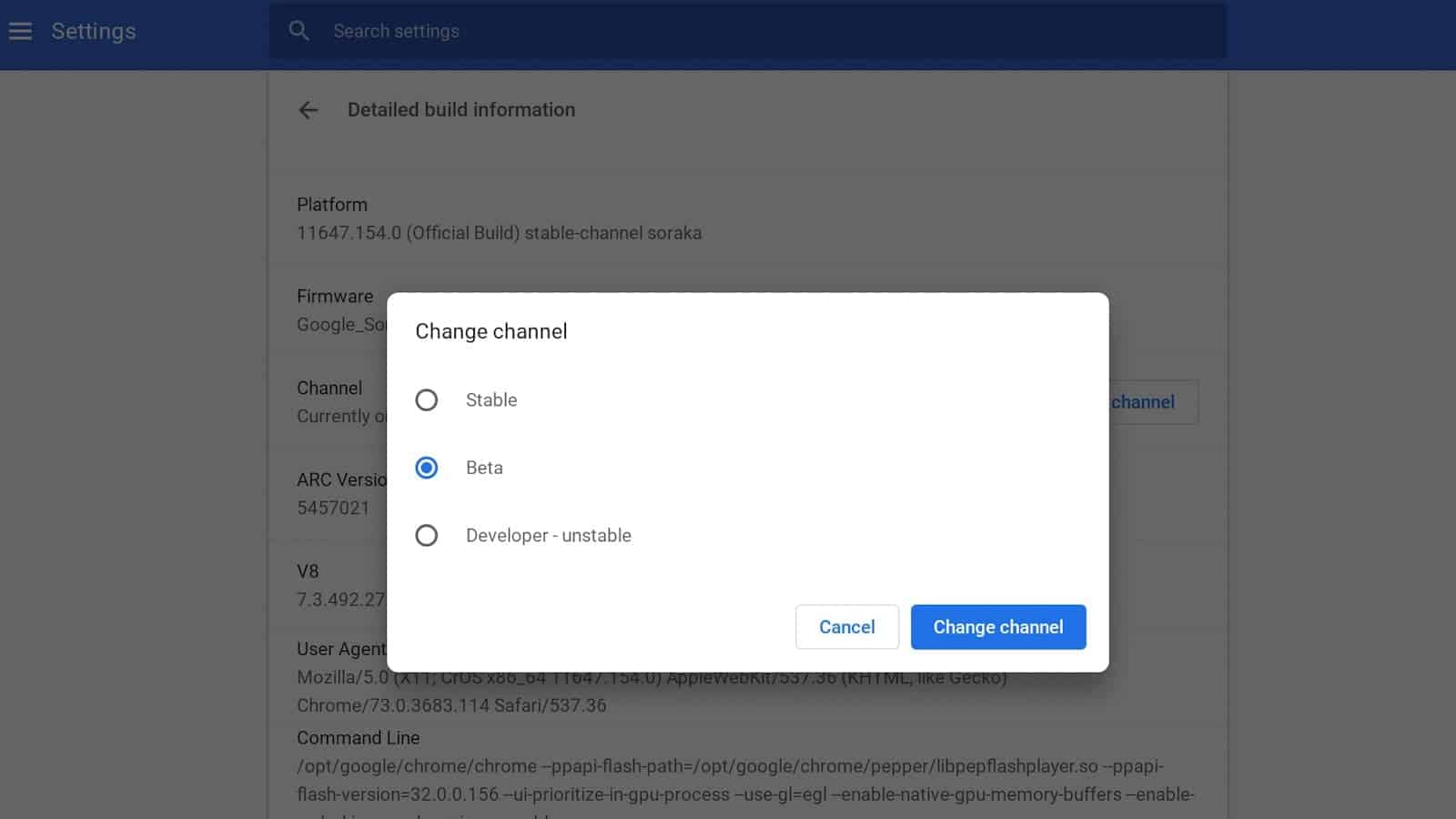 Tapping back to the previous page using either the back key or the on-screen back arrow icon will now show a progress bar for the download alongside the current version number.

The system will not update itself once that part of the process is complete. Instead, users need to click on the “Restart” button that will appear on the same page and the restart should only take a few seconds to complete. Once the update is finished, as is always the case with Chrome OS, any major new features Google wants users to be aware of will appear on start-up. 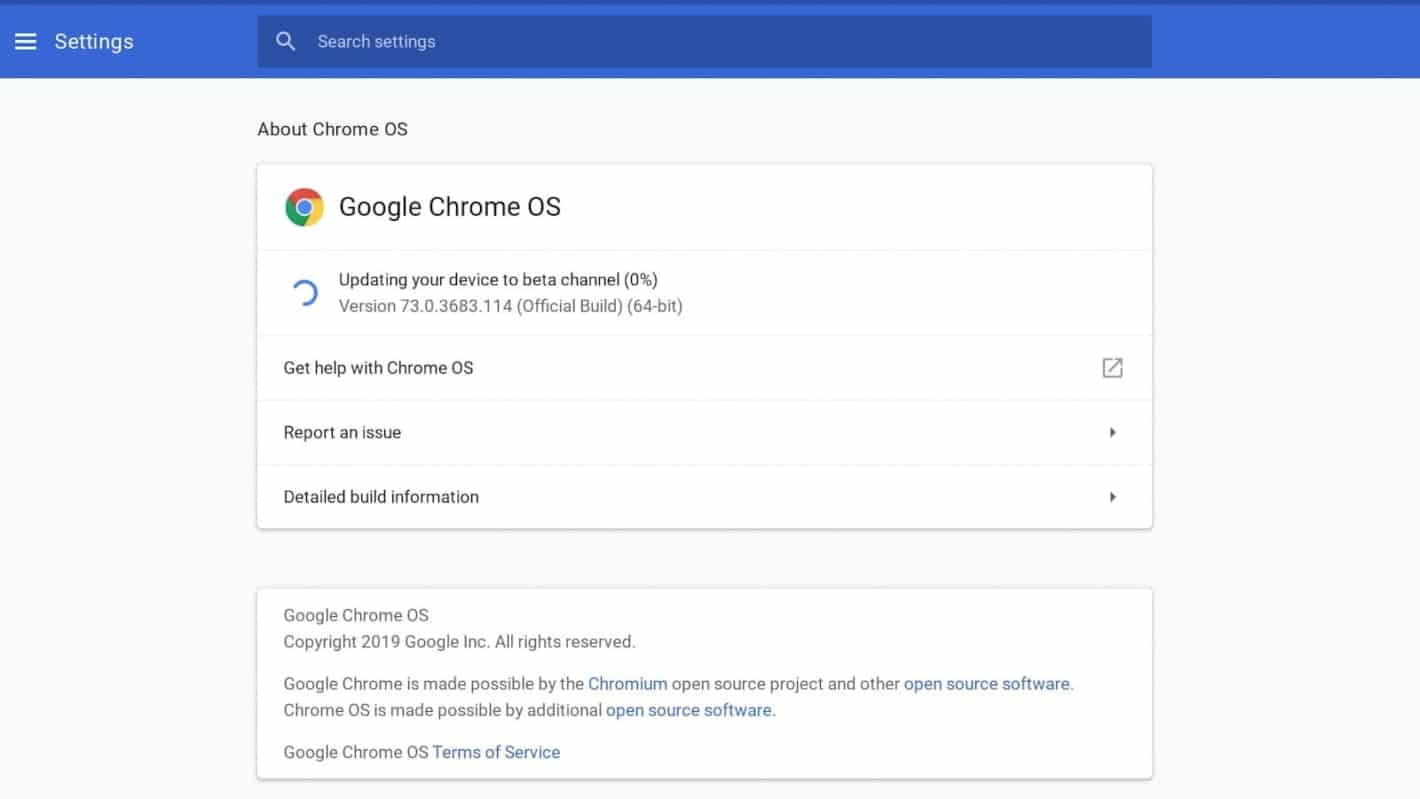 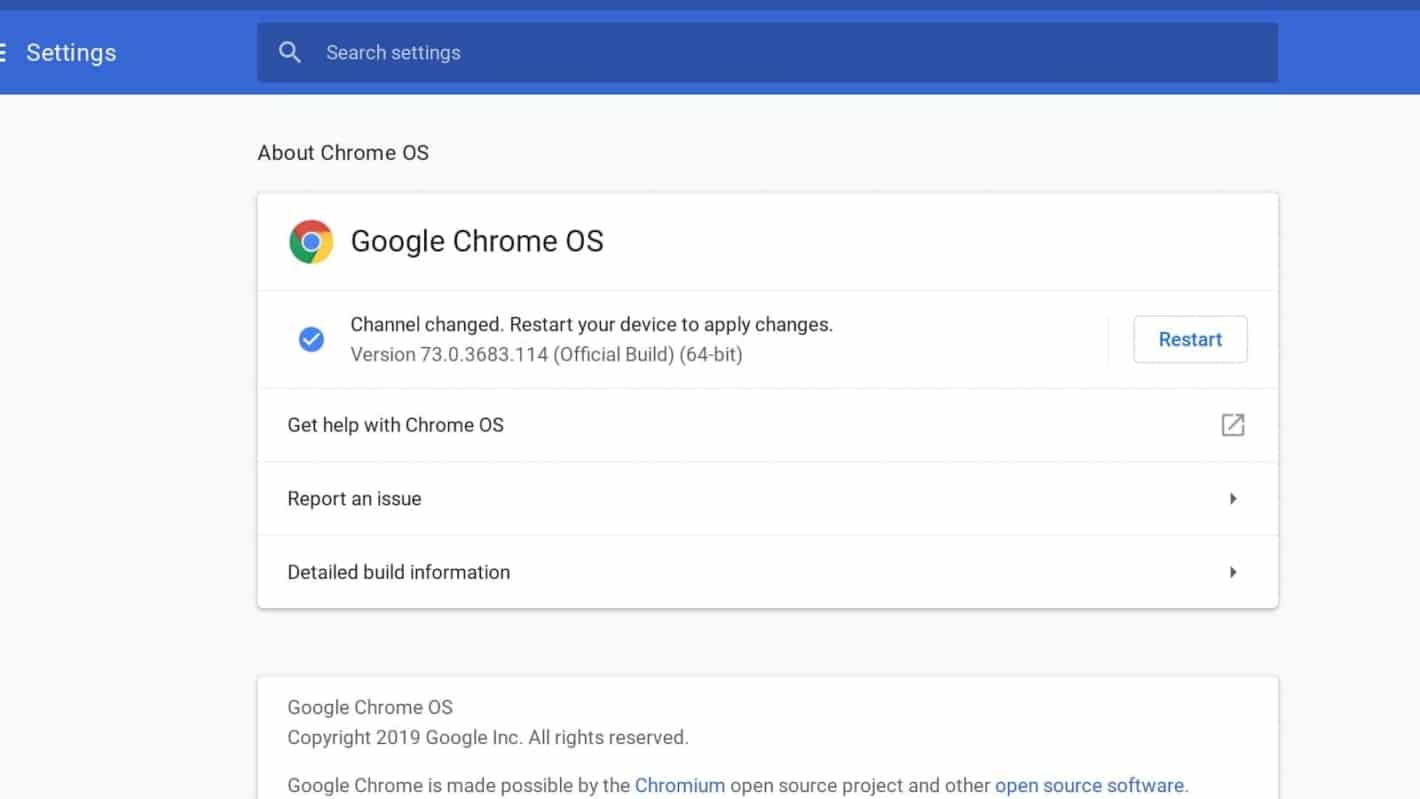 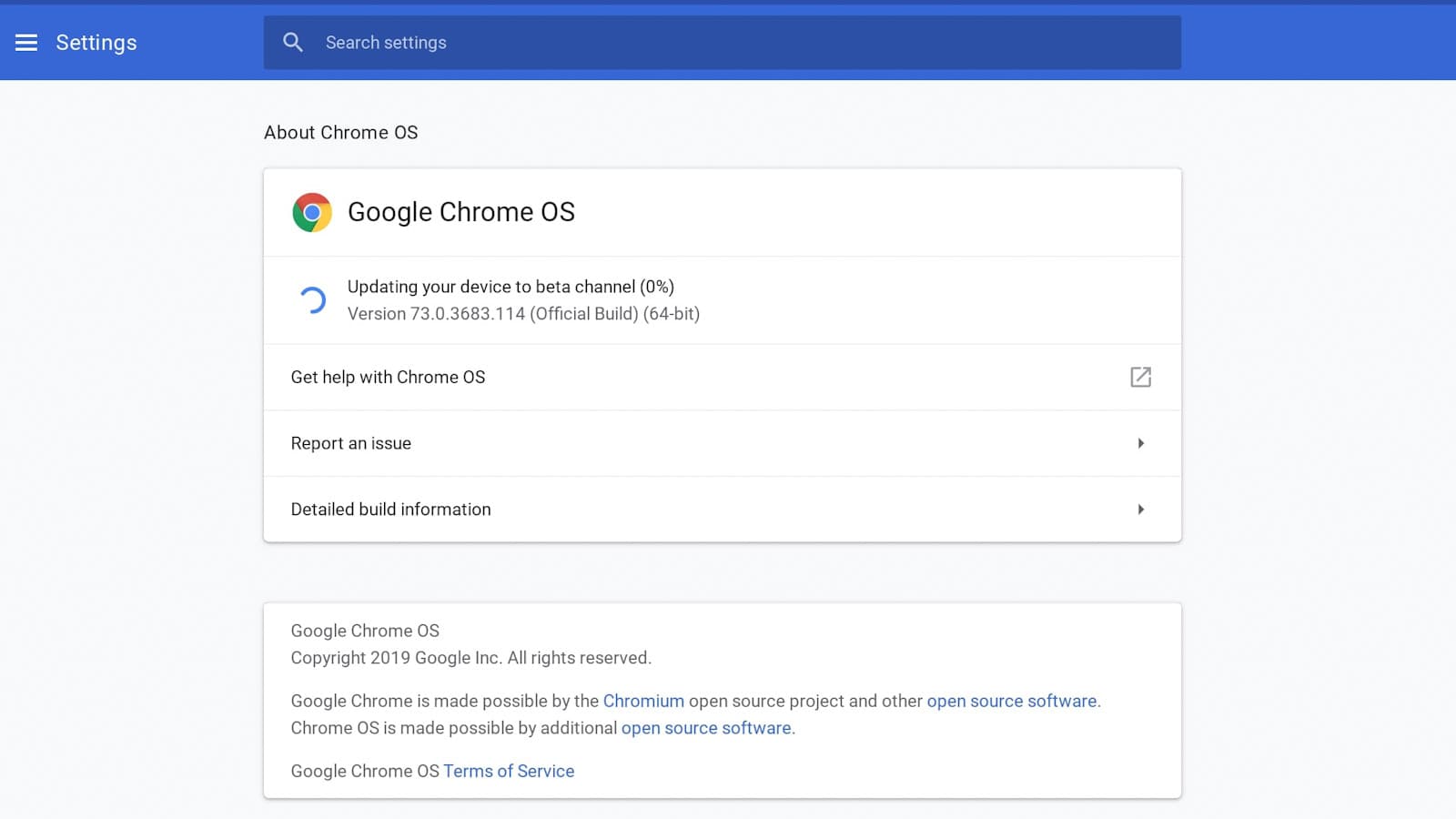 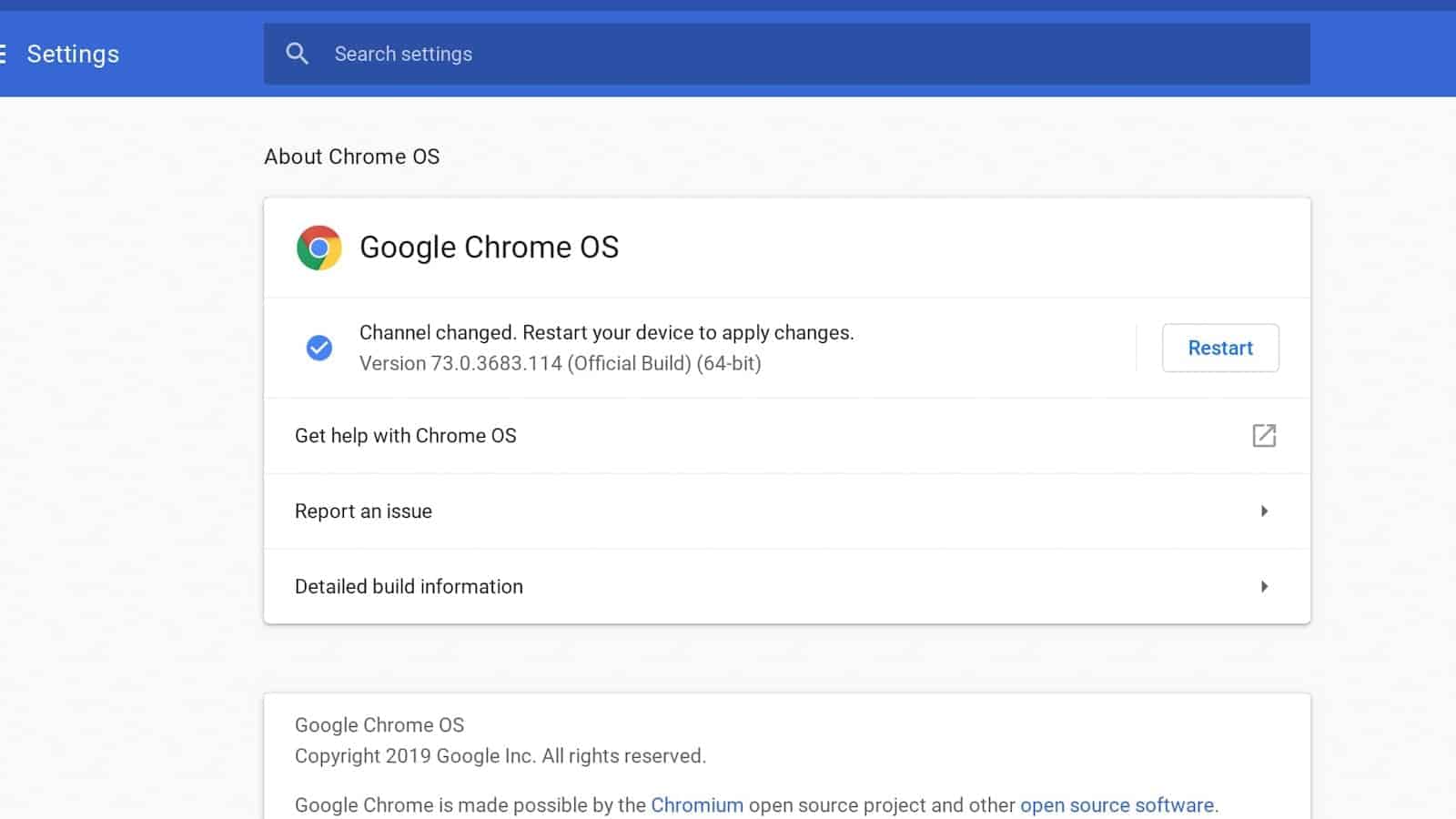 Signing back into the user account and syncing data should not be required to move to the Beta Channel of the operating system.

While there aren’t any warnings from Google about updating to the Beta Channel of Chrome OS, there is one with the Developer Channel. That’s generally because Beta is just stable enough to use without breaking anything beyond the ability to easily recover.

The warning, in this case, appears after following the above-mentioned steps to arrive at the “Change channel” pop-out and clicking on the Radio-button next to Developer-unstable. The message indicates that the version of Chrome OS that’s been selected is unstable as well as alluding to the fact that unexpected bugs and even crashes are likely to occur.

Moving over to the Developer Channel from this point follows the same steps listed above, users will click the blue “Change channel” button with the appropriate item selected and navigate back to the “About Chrome OS” page. Once downloaded, a restart will install the OS.

The final step may take quite a bit longer than the Beta update and users may notice that their device loads up to a blank screen during the process. That’s because there are significantly more changes being made to the OS here than with other updates, forcing the usually-fast Chrome OS updates to slow down as a result.

Returning to the Stable Channel follows precisely the same steps already outlined for the Beta and Developer Channels with one major exception already noted above. That change essentially works as a downgrade for the firmware and that means a completely fresh install instead of an update. So, once completed, users will need to sign back in and set up their Chrome OS gadget from new.

Because of that caveat, it’s a good idea to start the return process by backing up anything important to a folder in Google Drive. Those can be downloaded again once the installation is complete.

Chrome OS will remember the applications that were installed prior to the change and any reorganization of those the user had done in the app launcher. Similarly, it will remember items that were pinned to the launcher shelf. So there’s no need for concern there but any downloads, files, user-created folders that are locally stored will be erased completely.

Users will see a warning that the switch is going to powerwash the device, completing the device wipe. After the update installs and the user has clicked “Restart” on the “About Chrome OS” page, the device will reboot — this time showing the UI for a Powerwash prior to returning to the log-in screen. The primary difference is that this log-in will show the same walkthrough that was seen the very first time the Chromebook or Chrome OS gadget was set up.