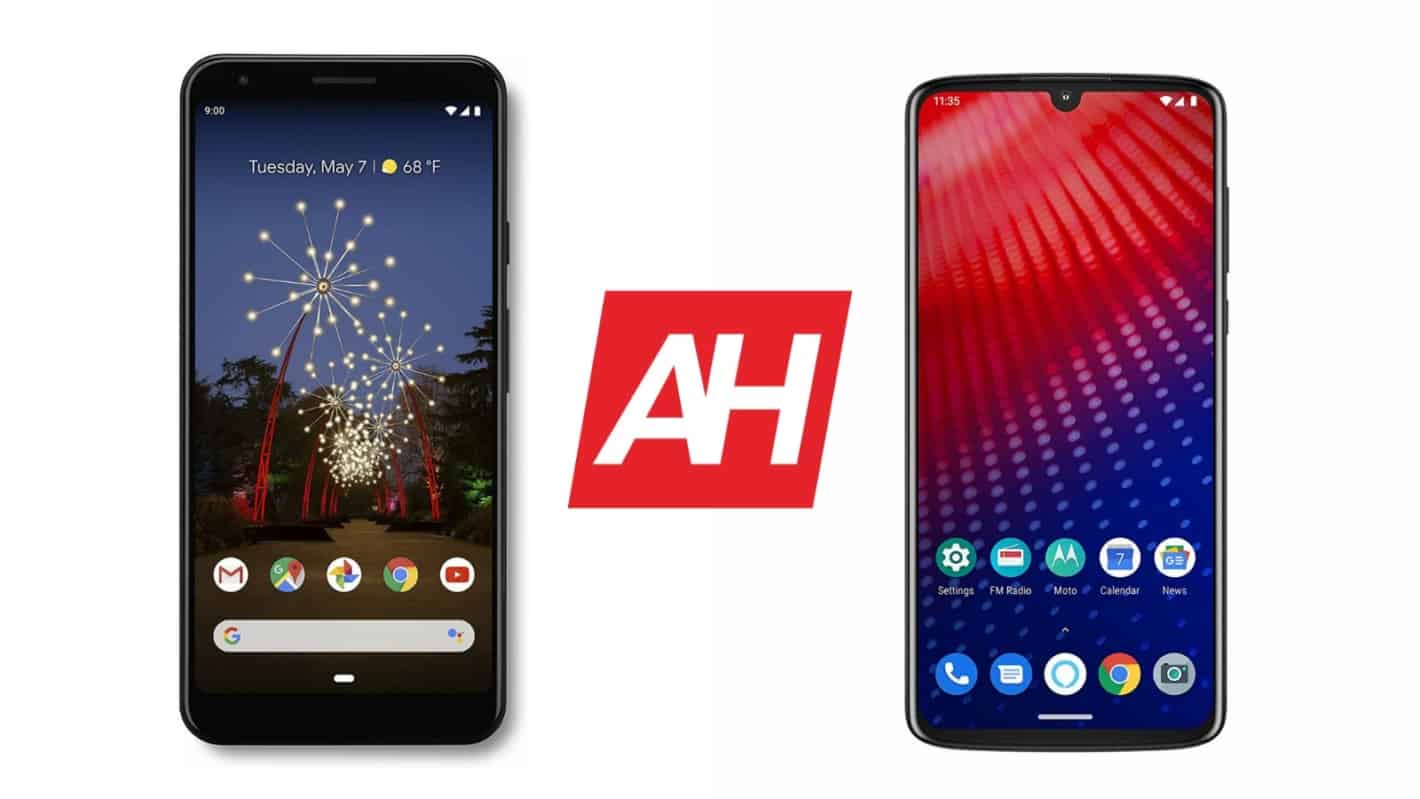 Both the Google Pixel 3a XL and Moto Z4 have launched quite recently, the Moto Z4 actually landed yesterday, and these two devices are quite interesting to compare. Neither of them are flagship-grade phones, but they are available with similar price tags, and both are aiming to provide you plenty of value for that price tag… the question is, which one to buy.

Well, if you've been planning to get the Pixel 3a XL and the Moto Z4 made you question yourself, we'll do our best to try and help you make up your mind. As per usual, we'll compare the two devices across a number of categories, ranging from specs to battery life, just to see which one comes out on top.

Each of these two phones have their strengths and weaknesses, as is the case with every comparison, but these two are priced below $500, so that is something worth noting before we get started.

When it comes to the design, these two phones are not that similar, at all. The Google Pixel 3a XL is made out of polycarbonate (plastic), while the Moto Z4 offers metal + glass build. The Pixel 3a XL also includes rather noticeable bezels above and below the display, while the Moto Z4 sports a thin "chin", and a dewdrop notch, that's about it.

The Pixel 3a XL is both taller and wider than the Moto Z4, despite the fact it sports a considerably smaller display. That is the case because it sports considerably thicker bezels, and because it comes with a wider display aspect ratio than Motorola's offering.

You will also notice that the Pixel 3a XL includes a capacitive fingerprint scanner on the back, while that is not the case with the Moto Z4, as that phone comes with an in-display fingerprint scanner. Both devices sport a single camera on the back, but that camera is placed in different places in these two instances, while it also looks considerably different.

The Motorola Moto Z4 also includes a set of pogo pins on the back, so that you can connect Moto Mods, while that is not the case with the Pixel 3a XL, of course. The Pixel 3a XL's bezels are put to good use, though, as the phone includes stereo speakers, unlike the Motorola Moto Z4. All in all, the Moto Z4 does look better, and it also feels like a more premium device, so it takes this category.

Both of these displays are flat, and in terms of sheer quality, they're on the same playing field. These are both fullHD+ OLED panels with similar resolutions, and quite frankly, one doesn't really pull ahead of the other.

Both are really solid OLED panels, that will deliver both deep blacks, and a nice contrast to your devices, though they are not amongst the best displays out there, and not only because of their resolution. Still, for the vast majority of people, these two displays will be more than fine.

So, what about performance? Well, you can expect both of these phones to offer solid performance, that's for sure, but don't expect flagship-grade performance. The Pixel 3a XL comes with stock Android, while the Moto Z4 is not far from that either.

On top of that, the two phones also include similarly-powerful chipsets from Qualcomm, the Snapdragon 670 and 675, respectively. Both devices include 4GB of RAM, and both ship with the latest version of Android OS, and are pushing similar pixel counts.

Both phones offer smooth performance with an occasional hiccup that you'd expect out of mid-range devices, but that's something most people will not even notice. When it comes to opening up, though, they are noticeably faster than flagship-grade phones, and that is to be expected.

Playing games is also more than possible on both devices, as they are more than powerful enough, and for a lot of people these two phones will be great performers. Truth be said, they are so similar in this regard as well, that singling out one is just not an option.

Battery life is also a category in which these two phones are somewhat similar. The Pixel 3a XL comes with a 3,700mAh unit, while the Moto Z4 includes a 3,600mAh battery. The Pixel 3a XL does have a smaller display, but it has an almost equal amount of pixels to push.

As far as sheer battery life is concerned, the Pixel 3a XL does have a slight advantage, and should provide you with a little bit more juice, though that will all depend on your usage, as the Moto Z4 will yield similar results.

The Pixel 3a XL comes with the same camera sensor that the Pixel 3 and Pixel 3 XL offer. In other words, it offers one of the best cameras on Android, in a package that costs less than $500. It is very difficult for any phone in this price tier to compete with the Pixel 3a XL in this regard, and the same can be said for the Moto Z4.

The Moto Z4 also includes a single camera on the back, a 48-megapixel sensor is included, but not Sony's IMX586 unit. Motorola actually opted for Samsung's ISOCELL sensor instead.

In regular, daylight conditions, both cameras are really solid and comparable, as long as there's plenty of light included in the image. The Pixel 3a XL starts to pull apart when the light is gone, and you can take advantage of its Night Sight feature. The Moto Z4 does well in this regard thanks to its Night Vision mode, but cannot provide you with shots like the Pixel 3a XL in such conditions.

Something similar can be said for dusk images when the sun is setting, as the Pixel 3a XL is capable of providing slightly unrealistic, but really nice-looking pictures. The Moto Z4's front-facing camera does seem to be slightly better, though, even though neither of them are something to write home about.

As previously mentioned, the Pixel 3a XL has a slight advantage in the audio department, as it offers stereo speakers. Both devices actually ship with a 3.5mm headphone jack, so that's always a good thing. So, which phone should you get if you have between $470 and $500 to spend, approximately.

Well, if the design is really important to you, and you'd like a more premium phone in terms of build, the Moto Z4 is for you. If you, on the other hand, value a great camera on a phone, and don't really care if a phone is made out of plastic, as long as it's quality plastic… then the Pixel 3a XL is a better choice. Overall, for us, the Pixel 3a XL has an advantage.