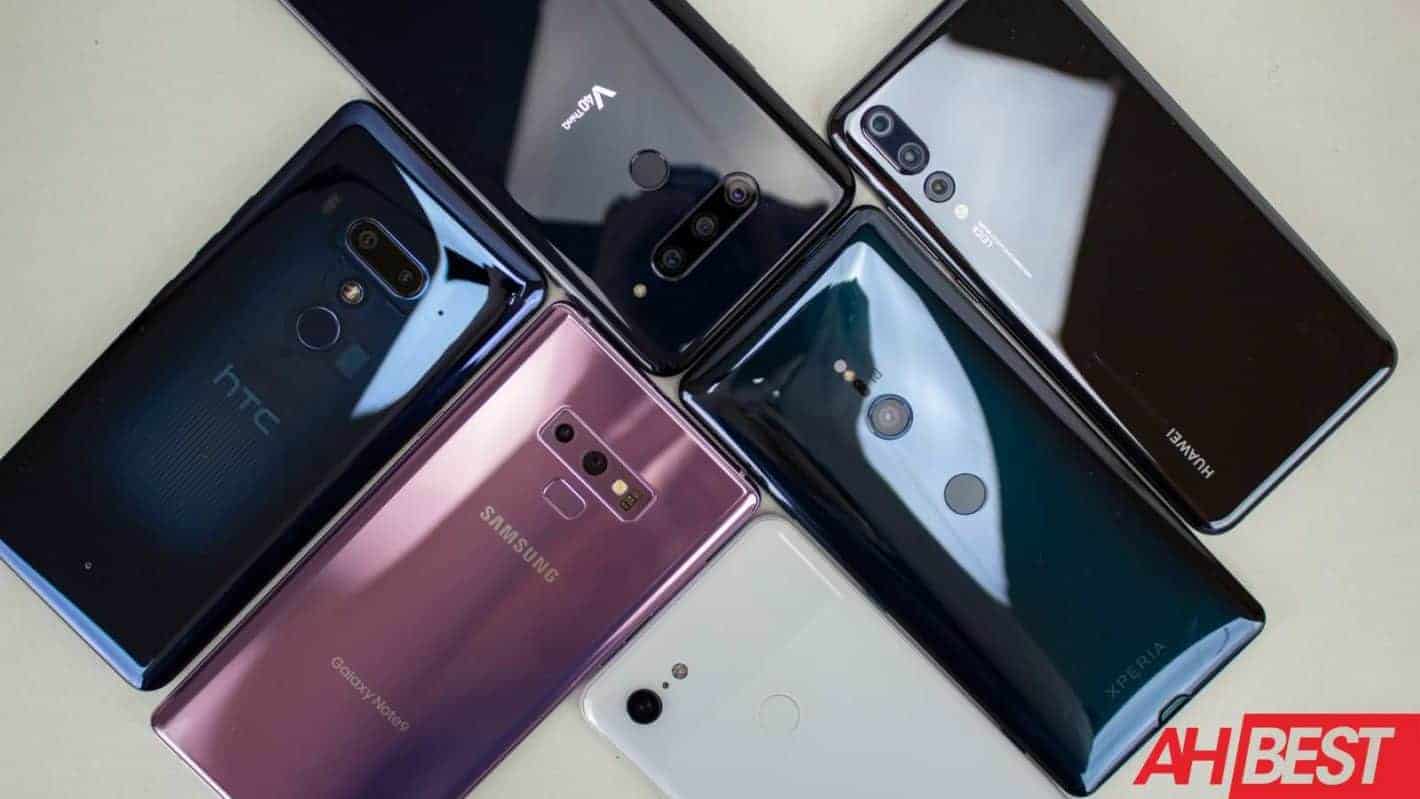 May is bringing about more than just Spring flowers, it’s also changing up the list of must-have Android phones and adding in something we don’t normally see on this list: a mid-range device. Typically, the best-of-the-best is relegated to the most expensive devices around, but there are plenty of reasons why this isn’t always the case. Find out why in our list of the very best Android phones to buy in May 2019!

We’ve shied away from including Google’s Pixel 3 family on our top 10 list since launch because, well, the phone has been plagued with bugs and problems from the start. Google has a chance to start over with its promise of delivering a true, solid pure Android experience with the Pixel 3a and Pixel 3a XL.

These phones offer the same everyday experience as the Pixel 3, seemingly minus the bugs, for half the price.

Everything else, from the OLED display to the fingerprint scanner, stereo speakers and the quick delivery of updates, is right on par with many flagship phones without spending all the extra money on the experience. Simply put, if you want an excellent camera but don’t need all the bells and whistles that higher price tags bring, this is the phone to get.

What makes the OnePlus 7 Pro worth it when compared to every other phone on this list? Value and speed. While it’s nowhere near as affordable as previous generations of phones from OnePlus, the OnePlus 7 ups the ante in many ways, including a pop-up selfie camera as well as a triple camera system around back.

In addition to that, OnePlus is sticking with its mantra of offering more speed than the competition by providing a 90Hz OLED display on the front, capable of delivering 50% higher framerates than the vast majority of other phones on the market, including every other phone on this list (all of which have screens that run at 60Hz). This means the phone feels buttery smooth in every app and game, and the new higher resolution panel means it looks better doing it too.

T-Mobile is selling only the higher spec model in the US, coming in at $699, while OnePlus’s website will be selling all versions of the OnePlus 7 and OnePlus 7 Pro on its website.

Samsung’s Galaxy S10 is the most feature-rich, well-rounded set of phones on the market, bar none. There’s little the Galaxy S10 family does wrong, all four phones the lineup as a matter of fact, and it’s far harder to find negative points about the phone than it is to find good ones.

We’ve highlighted our ‘Good Review’ here specifically because this phone line offers so much good in so sleek a package. Sporting a brand new design that features less bezel than ever and just a small camera cutout in the display, the Galaxy S10’s build and design looks and feels better than any Samsung device before it.

All four models offer the very first ultra-wide angle camera on any Samsung device, which rounds out the camera experience to provide an incredibly versatile experience no matter what size Galaxy S10 you choose. It’s not just about camera improvements though, as OneUI delivers the most solid software experience to ever grace a Samsung phone, including some impressive tie-ins with third-party software as well. Outside of sheer price, it’s difficult to find a reason not to recommend the Samsung Galaxy S10 this Spring.

Huawei’s phones of late have all been focused on delivering a world-class camera experience, and for good reason. Huawei has gotten exceedingly good at creating smartphones designed around bringing a professional feel to the average user’s daily events.

Huawei’s unmatched fusion of camera software and hardware has reached a new height with the P30 Pro, which features the industry’s first 10x hybrid zoom and can digitally zoom up to 50x. That’s not a typo, the camera really is that stellar, and it’s not just zooming that’s this great either.

Huawei has kept the ultra-wide angle lens from the Mate 20 Pro, complete with autofocus and super-macro mode, in addition to the ultra-high detail 40MP main sensor too. It’s a camera experience like no other, and something to seriously take into consideration if you care about cameras at all.

The bonus? You can actually order one if you live in the US as well, contrary to what headlines might make you think about the state of Huawei products in the country.

LG’s 8th generation flagship has gotten a lot of grief around the web, and for little reason when you boil the reasons down. To start things off, the G8 packs a brand-new crystal sound OLED, which adds stereo speakers to an LG flagship for the first time. This, in addition to the award-winning audio output via the 3.5mm jack at the bottom, creates the absolute best combination of sound experiences you’ll find on any modern flagship, even if you’re not an audiophile.

LG’s modified design also features a larger battery in addition to removing the camera hump; something many users and critics alike have pined about for years. Then, there’s the addition of a third camera for most regions, which adds in a telephoto lens that complements the already excellent ultra-wide angle one that other LG flagships have been shipping with for years.

LG’s vision of Android 9 Pie includes more customization than Google’s version, as well as one of the absolute best camera interfaces on the market. Anyone who’s even remotely interested in starting their own YouTube channel, or just filming excellent everyday content with more manual controls than any other flagship offers should seriously consider LG’s latest, which can features manual video controls up to 240FPS at 1080p resolution.

While the OnePlus 7 Series was just announced, it marks the most expensive pair of phones OnePlus has ever launched. The OnePlus 6T, conversely, can be found for significantly less and offers an incredible experience that’s still blazing fast, no matter what you do with it. It’s not quite as inexpensive as the Google Pixel 3a but it offers a significantly faster experience than that phone, including more RAM and storage..

OnePlus has had a stellar update schedule lately, including fast updates to the latest versions of Android without all those nasty bugs that regularly come with early-release software. It also regularly claims the title of fastest phones in the land with every new release, something that’s not easily overtaken even by newer generations of phones.

HONOR has been in the mindset of many when it comes to good, inexpensive phones, but not often in the minds of those looking for a phone that also has a great camera. That all changed with the HONOR View20, a phone that packed in a brand new generation 48-megapixel Sony sensor that does it all. It’s not often that a single-camera can rival the experience of phones with multiple cameras, but this phone certainly can.

The View20 sports the very same processor and nearly identical operating system as the Huawei P30 series, yet it costs quite a bit less money. Part of this is the reduction in camera quantity, while the other is a less impressive LCD display, but it all ends in a similar experience without having to save up all that extra dough.

It’s an excellent fusion of speed, where the View20 sits side-by-side with every other flagship on the market, and quality optics and camera software, in addition to running the latest version of Android as well. Looking for a fantastic mid-ranger with a particular focus on camera and speed? Here it is.

While the Pixel 3a is the only actual mid-range specced device on this list, the Xiaomi Mi9 is only priced like one. Keeping with its mantra of providing excellent phones at rock-bottom prices, Xiaomi’s latest continues to impress in every regard, especially the price.

At around $400, the Xiaomi Mi9 is the same price as the Google Pixel 3a, yet it packs in a significantly faster processor, more RAM, more storage, more cameras, a higher quality design and build, and more features than any Pixel phone will likely ever have.

Xiaomi’s MIUI 10 is arguably the best OEM skin on the market too, one that’s updated consistently with new features and security patches, as well as significant design enhancements over stock Android. It’s an incredibly fast, light-feeling and yet somehow feature-rich version of Android that just looks and feels great.

Xiaomi’s hardware never fails to deliver either, and everything from the super-fast wireless charging to the fantastic camera experience delivers well beyond what anyone would expect at $400 and meets expectations with phones several hundred dollars more expensive. Xiaomi has delivered unprecedented bang-for-your-buck for a long time now, and the Mi9 continues that pedigree.

While the LG G8 is available and offers much of the same functionality, not all regions received the model with three cameras. For those regions, particularly the US, the LG V40 ThinQ is still an excellent way to experience some of the best LG has ever made. This includes a similar build and design to the G8, the same amazing vibration motors, high quality OLED screen and fantastic overall performance.

The V40 is likely an easier buy for some as it’s been heavily discounted at a number of carriers and may be an even more attractive offer than the G8 if price is a main concern.

The biggest draw of LG’s flagships continues to be the manual photo and video modes in its camera software which enables DSLR-level control over the image quality. While some phones offer some manual controls over photo modes, no one else offers this same functionality in video mode, and that’s really where LG shines. We’ve been using the LG V-series on our YouTube channel since 2017 as a main camera, and it continues to be a joy to use every time.

The Galaxy S10 might be the latest Samsung flagship, but there’s nothing that’s quite like a Galaxy Note phone to deliver the complete experience. The Galaxy Note 9 was the complete package in 2018, garnering our award for phone of the year (the first time a Samsung phone has won that in some time). There were many, many reasons for this, but mainly because the phone wasn’t lacking in any real areas.

Folks that don’t want a notch or punch-hole in their display will be happy with the small bezels on the Note 9, which aren’t quite as tiny as the Galaxy S10, but also don’t feature any portions of the display removed. Aside from this fairly minor cosmetic difference, the Galaxy Note 9 features the veritable S-Pen, a tool that millions of consumers have used and loved for years, and one that sets the Galaxy Note series apart from every other phone on the market.

The S-Pen is more than just a simple stylus. It’s powered by a Wacom digitizer that’s completely separate from the touch digitizer that recognizes your fingers, meaning inputs from your fingers register as completely separate from the S-Pen itself. This makes the Note 9 the best note-taking and doodle-making machine around, something that’s especially helpful if you’re someone who regularly finds themselves taking notes or jotting down ideas throughout the day.