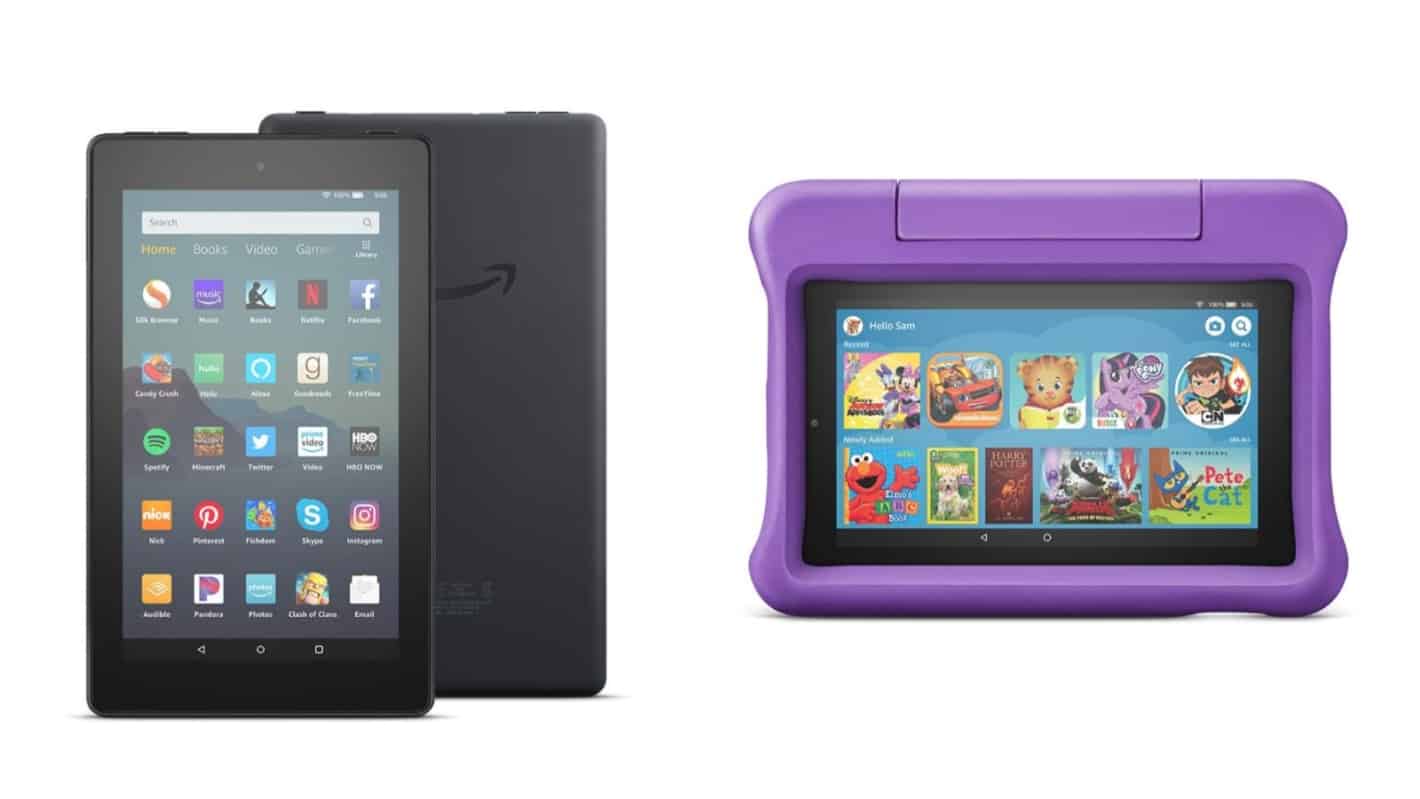 Amazon has now announced a ninth-generation refresh for its widely popular Fire 7 lineup, including a new version of both the “Kids Edition” and standard tablets. The devices are effectively identical with a few variations in their intended use and most of the changes happening under the hood. They’re also available in brand new colors, bringing a new sense of style and personalization to the series.

For the grown-up, standard edition Amazon Fire 7, the primary distinguishing design feature here is going to be in its color, with the gadget now shipping in Black, Plum, Sage, and Twilight Blue. The 7-inch 10.1-ounce tablet features a 1024 x 600 resolution IPS panel with high-accuracy color reproduction and a frame designed to be twice as durable as the newest iPad mini — according to Amazon.

At both the front and back of that, buyers will find a 2-megapixel camera capable of capturing video at up to 720p HD. A 3.5mm headphone jack, integrated speaker, and micro USB are still in place for media playback and charging. A single mic is in place for helping capture audio and interacting with Amazon’s Alexa AI.

On the inside where changes are most prominent, the latest generation of Fire 7 tablet now includes a quad-core 1.3GHz processor with 1GB memory and more storage. Consumers can pick between 16GB or 32GB versions with a microSD card slot allowing for up to 512GB of expansion beyond that. The internal battery on this gadget supports up to 7 hours of reading, media consumption, or web browsing via a single-antenna dual-band Wi-Fi arrangement.

On the software side of things, Amazon includes all of the usual suspects ranging from its Family Library, Prime Video, Amazon FreeTime, X-Ray, and Blue Shade nighttime and blue light blocking features to its 24/7 free support. The latter of those can even utilize screen sharing to help solve more complex and difficult to describe solutions.

Prime members, of course, get even more with access to free movie and music playback, books, twitch streaming, unlimited Amazon Photos storage and 5GB of cloud storage for other files.

…and one for the kids

Now, the 16GB Amazon Fire 7 Kids Edition comes with identical specifications to its namesake counterpart but it does pack in a few key features that make it well-suited for younger children. With its pricing set at $99, Amazon mentions no ‘special offers’, so there shouldn’t be any advertisements on the lock screen as there are with the more budget-friendly variant of the adult version of this tablet.

The tablet is packed in with a rugged kickstand-enabled kid-proof case and a free year of Amazon FreeTime Unlimited. The company goes further to include a 2-year guarantee promising that if the case can’t stand up to your child’s enthusiastic use of its new Fire 7 tablet, it will take the gadget back and replace it for free. The case is available in Blue, Pink, or Purple colorations.

For the uninitiated, Amazon FreeTime Unlimited provides access to more than 20,000 apps, games, books, audiobooks, video content, and educational media from the big names in the business including Disney, Nickelodeon, and PBS Kids. Thousands of those books, videos, apps, games, and audiobook are available in Spanish as well.

In addition to the fact that Fire tablets already support up to two adult profiles and four individually customizable child profiles — adult profiles are secured by PIN — FreeTime Unlimited effectively acts as a parental control tool. Ordinarily priced just short of $3 per month for Prime members and under $5 for everybody else, it blocks access to social media and gives parents a dashboard for filtering content by age and setting screen time limitations or education-based goals.

Content filtering is hand-curated by Amazon and the access to subscription features aren’t limited to Amazon Fire tablets. They can additionally be accessed via Echo, iOS, and Android gadgets.

Both of the new Amazon Fire 7 tablets are already up for pre-order now. Each is also slated to ship as soon as June 6 of this year and has its own promotion running in the meantime.

The Kids Edition tablet with the year of FreeTime Unlimited and case included is priced at $99.99 — around a $109 savings over the usual cost of buying separately. Amazon is throwing in a pair of Toy Story-themed headphones with the bundle at no extra cost for the time being as well, based on the device’s store page as of this writing.

The adult-friendly variant of the Amazon Fire 7 can be purchased for $49.99 or $69.99 for the 16GB and 32GB variants, respectively. That pricing is for those who don’t mind seeing ads displayed on their lock screen. Those who don’t want the ads will need to shell out $64.99 or $84.99, respectively.

Buyers who pre-order the adult edition of the new Fire 7 tablet will also snag a $10 credit that’s good towards apps and games found in the dedicated Amazon Appstore. Fire 7 cases will be available too, in Charcoal Black, Sage, Plum, Twilight Blue, and Desert Orange colors. Each features a stand that can be used in either landscape or portrait orientation and will cost $24.99. 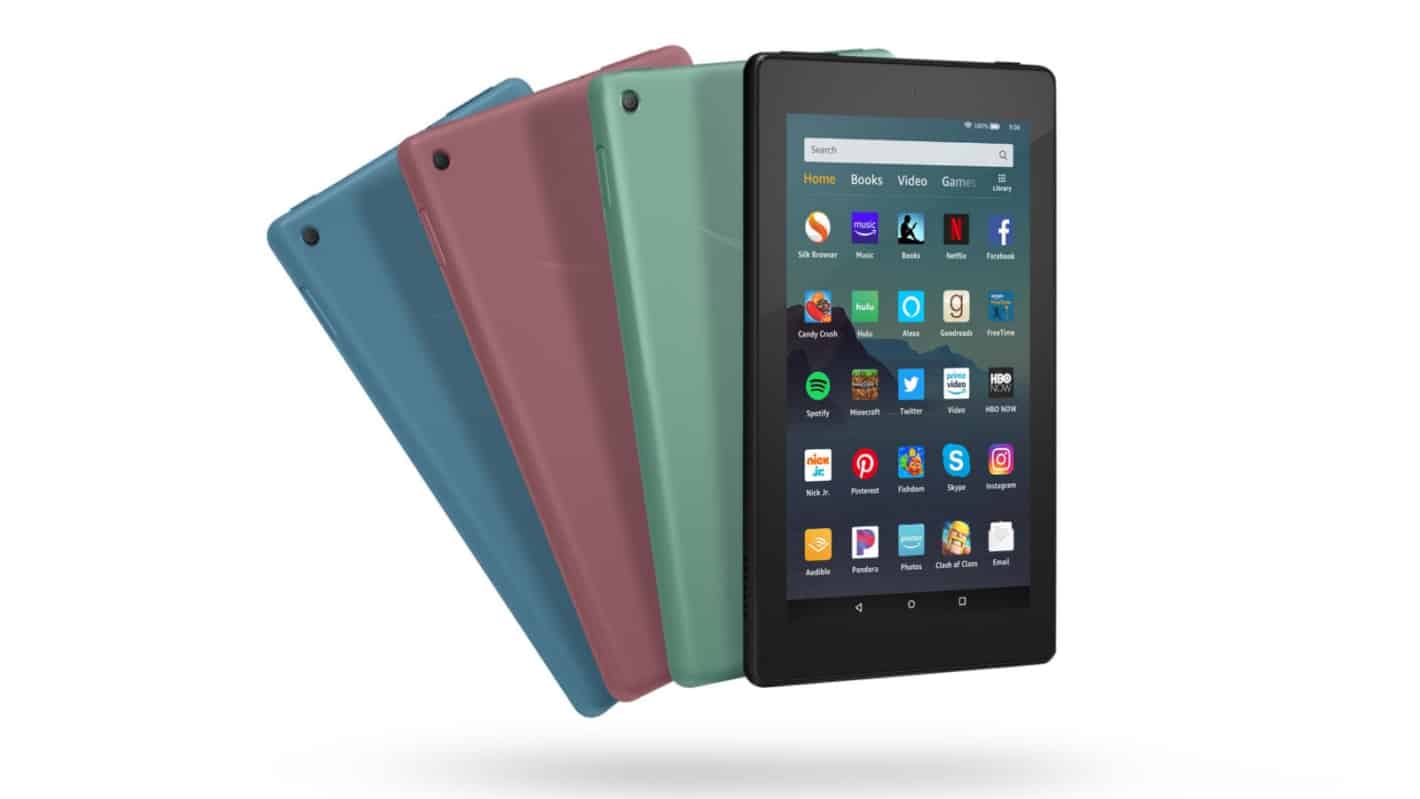 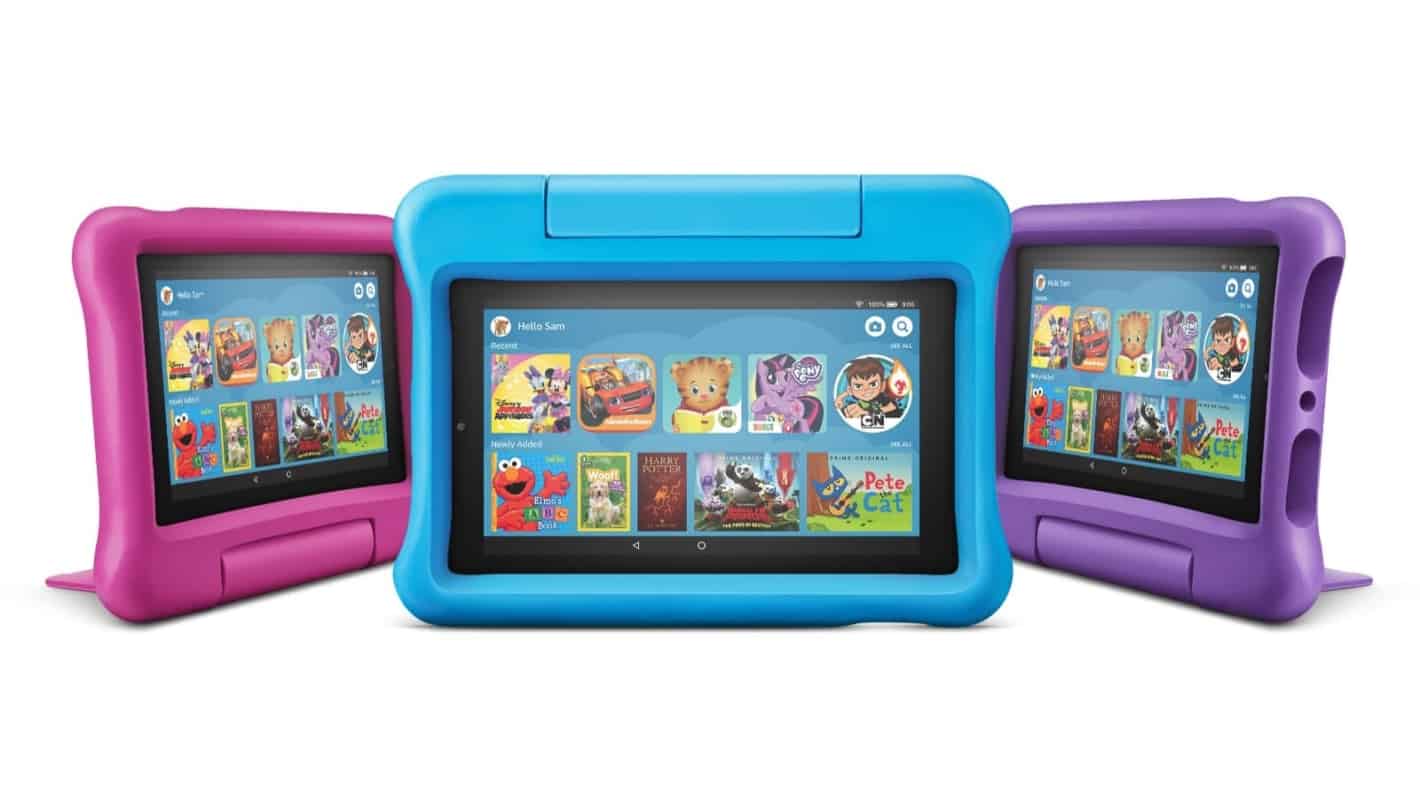 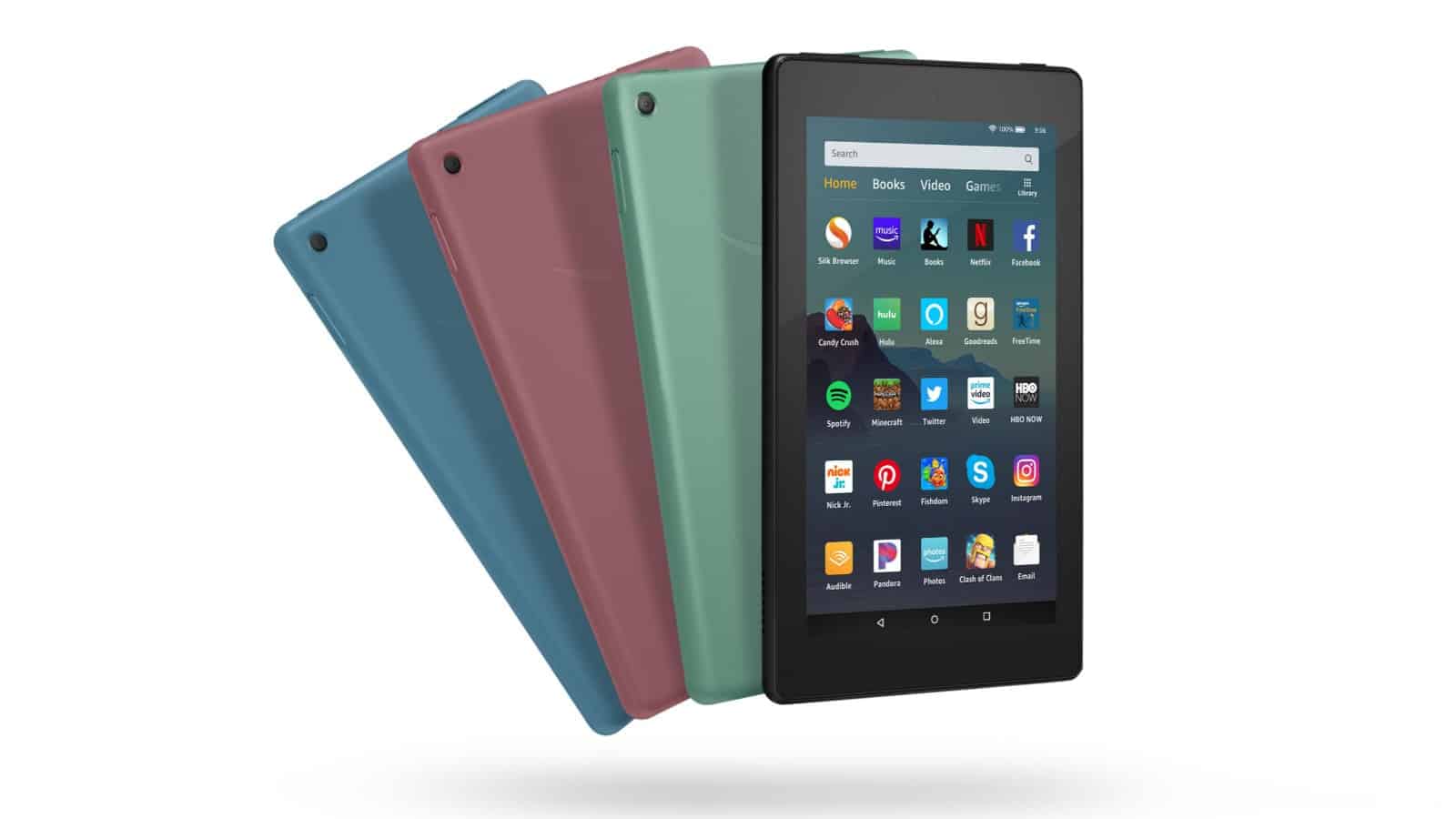 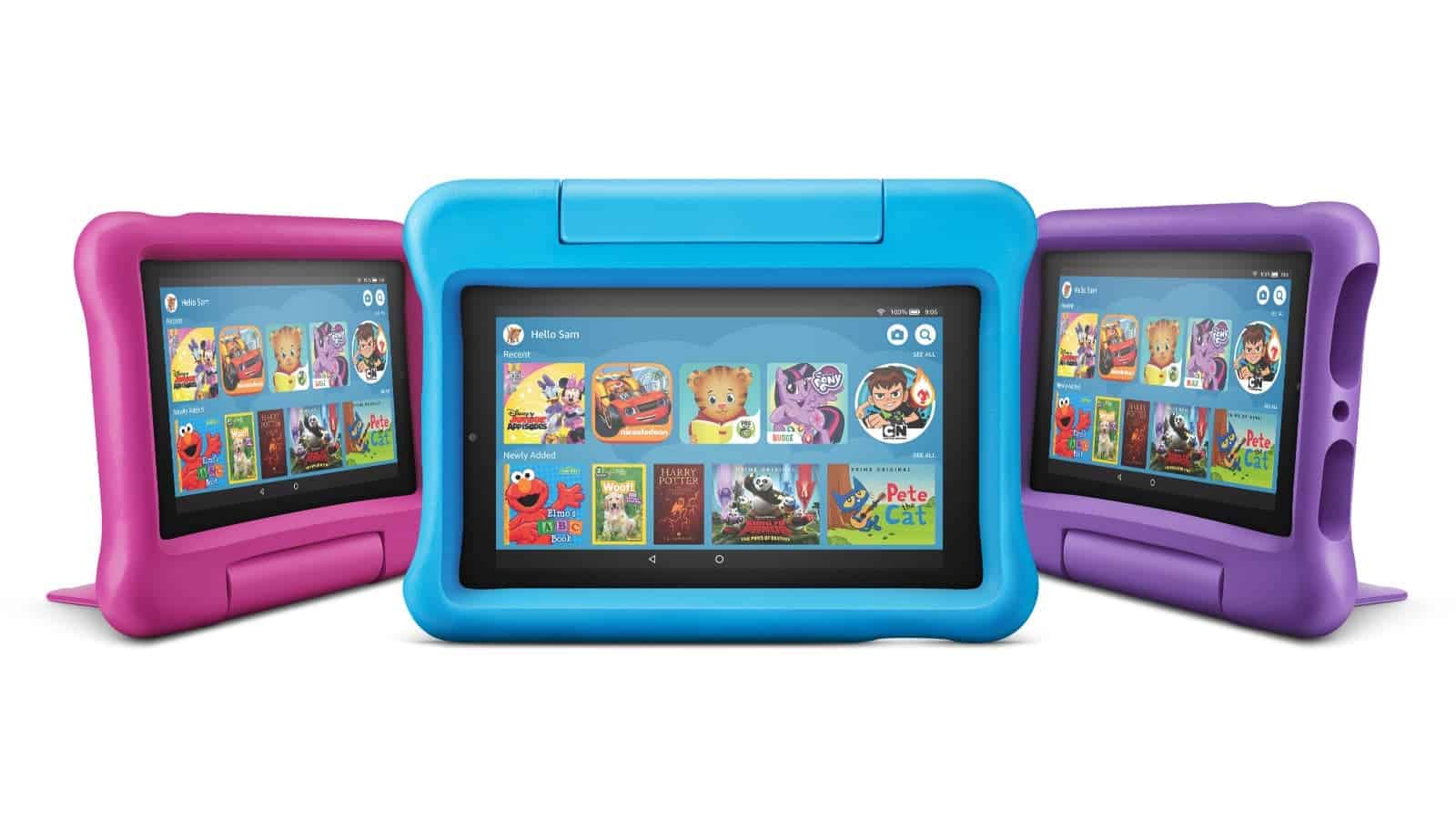