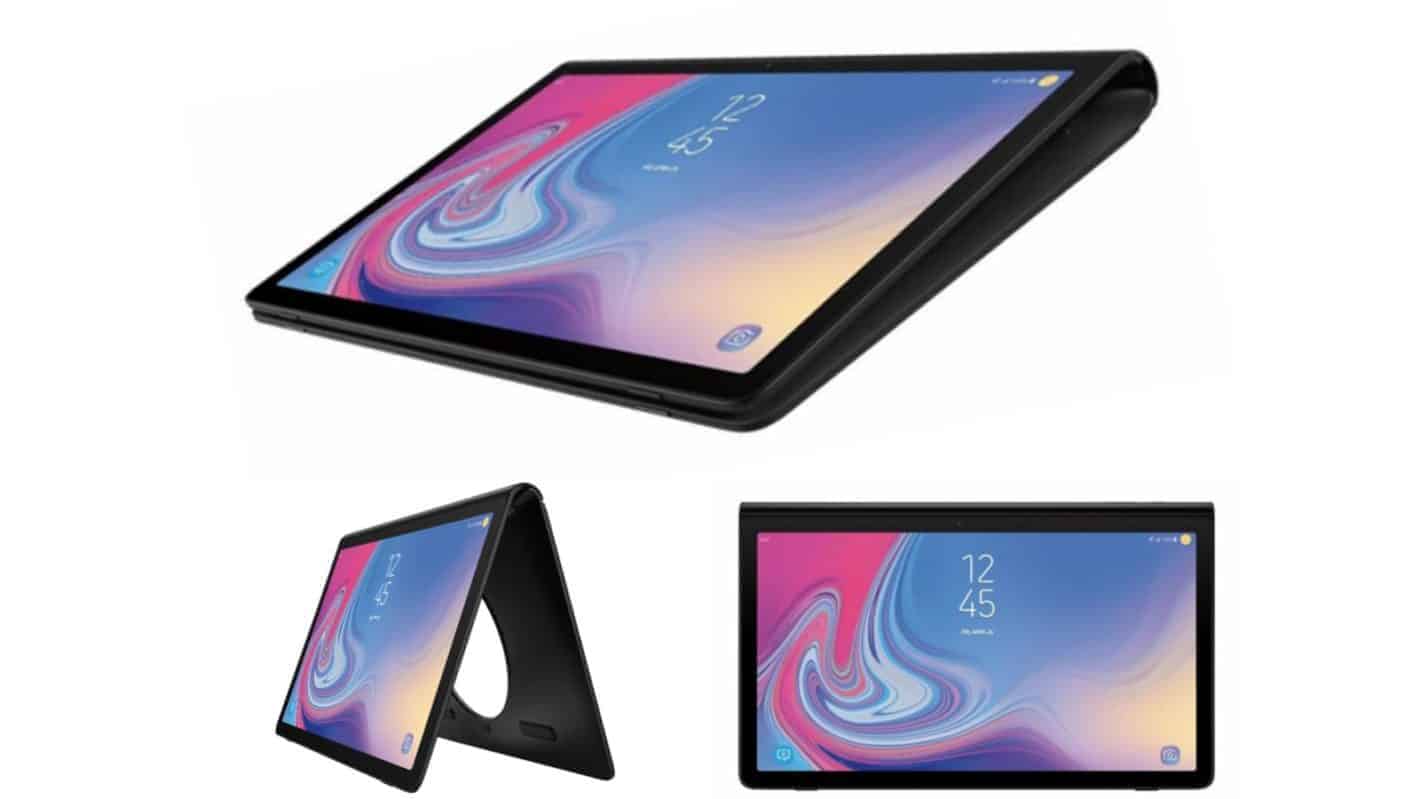 A few renders of the alleged Samsung Galaxy View 2 have surfaced, courtesy of SamMobile. Based on these renders, the next-gen Galaxy View will feature a new ergonomic hinge and kickstand that is aimed to make the overall user experience more convenient and enjoyable.

What is the View meant for exactly? Samsung has created a product that is centered around media, basically. Everything from watching videos to surfing your favorite apps. Boiled down, it's basically a huge tablet with a kickstand.

The main difference between this new design and the original is the kickstand. Version two sports a rounded off hinge, and the kickstand itself has a sizeable hole in it, while it sits at 30-degrees when fully closed. This is supposed to make the device easier to hold and grip during transportation.

The dedicated handle that appeared in the original version has been removed. The screen is also smaller here in the second adaptation, now boasting a 17.5-inch display rather than the previous 18.4-inch one.This will make the new device more portable and easier to manage than its predecessor.

The original Galaxy View had a display resolution of 1920 x 1080, so we'll likely see that again in the Galaxy View 2. It is still unknown when will this device become official, though, nor how much will it cost.

These renders appear at an interesting time regarding Samsung's recent announcement of the Galaxy Tab S5. The tablet side of Android has always been low-key and one might say "lacking". None of Samsung's previous versions, or any other brands for that matter, have been able to stack up against Apple's iPad or Microsoft's Surface Pro line. Tablets alone are a middle-child category in that they represent the mix of a laptop and a smartphone. Some really like them, while others prefer to simply not have one.

Admitingly, it is a little hard to see why the View exists at all. It represents a (lot) larger Galaxy Tab, but with a kickstand. Samsung already markets the Galaxy Tab and almost every other tablet has some version of implementing a kickstand, while the Galaxy View line is simply too large for most people.

The larger screen is clearly more convenient for watching videos, but at 17 inches, this device is a bit awkward size for most folks, that's basically a standard laptop-sized display without a keyboard. Nonetheless, there must be a market for it, as Samsung is moving forward with the second-gen product.

With this leak, and foldable phones emerging, the tablet game is only getting more confusing. A device that can transform from a smartphone to a table in a matter of seconds represents the newest take on 2-in-1 handsets. Both Samsung and Huawei had announced their own versions of foldable smartphones, the Galaxy Fold, and Huawei Mate X, respectively.

Samsung experienced troubles upon the early release of the Galaxy Fold to select recipients. Some of them are having display issues, so Samsung has opted to delay the Galaxy Fold's release for an unspecified amount of time. The Galaxy View 2 will not exactly be the Galaxy Fold's competitor, but it is yet another unorthodox device that the company is planning to release.