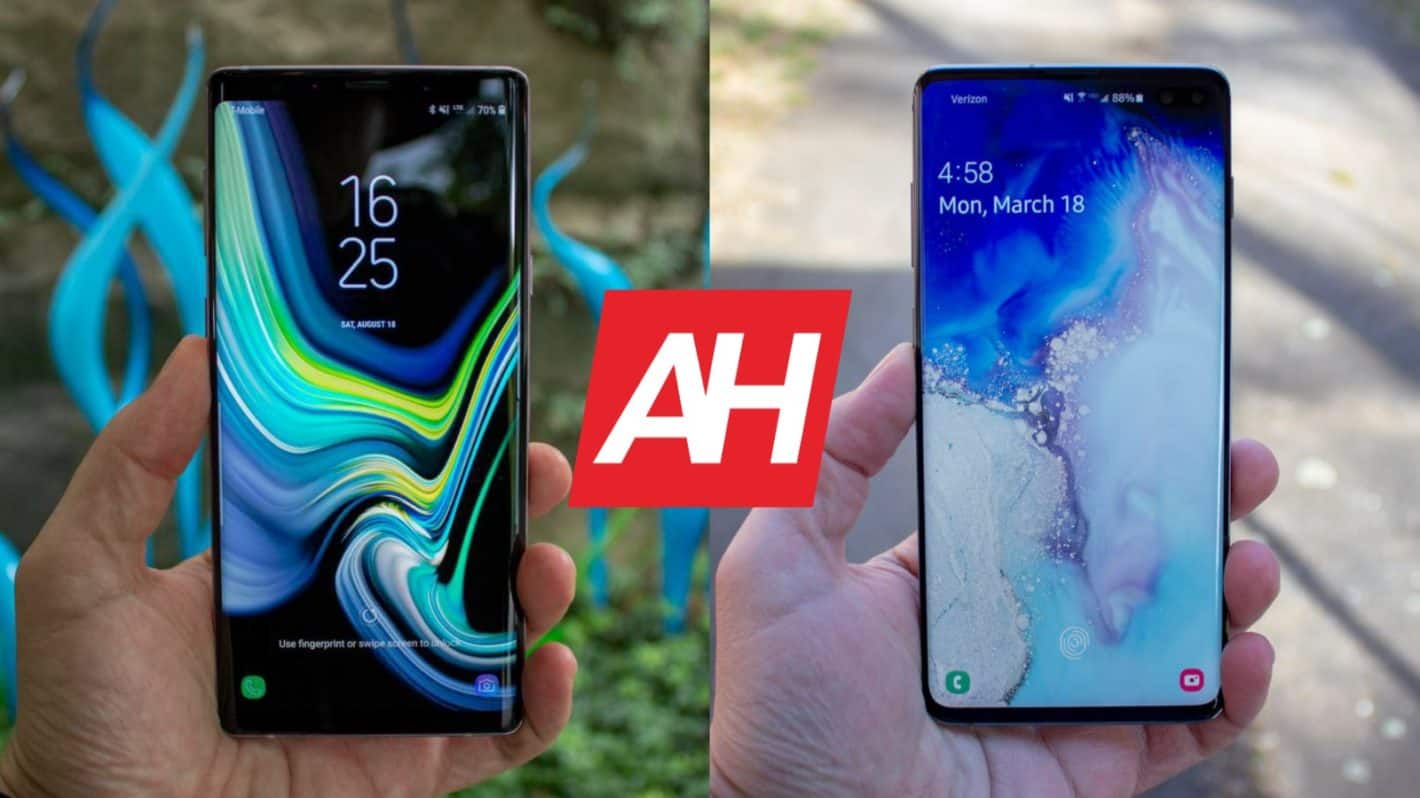 The Samsung Galaxy Note9 is no longer the company’s flagship as that status now goes to the Galaxy S10 series, and most notably the Galaxy S10+.

In spite of the Note9 no longer being the hottest new phone from Samsung, some will still be considering buying it as the phone is now considerably more affordable than it was when it launched.

If that’s you, then you can use this comparison in order to see whether the phone is worth the money now that the Galaxy S10 series is out, especially considering it comes with S Pen functionality and therefore offers something the Galaxy S10+, or any other Galaxy S10 phone for that matter, doesn’t.

We’ll kick things off by listing specifications for both devices, and go from there.

Both phones are curved on the back, and both feature curved displays, so using them without a case, especially with one hand, is easier said than done. They’re both quite slippery, as they’re made out of metal and glass.

The biggest difference in terms of the design, when it comes to these two phones, lies on the front. The Galaxy Note9 does not have a display notch or a display hole, but it does have a noticeable top bezel. Well, the Galaxy S10+ traded in that bezel for a display camera cutout, it has a pill-shaped cutout which houses two camera, and that cutout is placed in the top-right portion of its display. The cutout may get in the way for some, though most people so far don’t seem to mind it.

The Galaxy Note9’s design is not outdated, and for those who are not so keen on the cutout look, it is probably a better design overall. It all depends on what you prefer, but both phones are quite compelling in this regard – providing you don’t mind slippery devices.

The Samsung Galaxy S10+ basically took the display throne from the Galaxy Note9, as the Galaxy Note9’s display was considered to be best around until the Galaxy S10+ came to life. Truth be said, these two displays are extremely similar, they’re both super sharp and really punchy.

Both phones include 6.4-inch displays, and they’re even similar in resolution. The Galaxy Note9’s panel has 2960 x 1440 resolution due to an 18.5:9 aspect ratio, and we’re looking at a Super AMOLED panel here.

Display protection is also different on these two phones, the Galaxy Note9’s display is protected by the Gorilla Glass 5, while the Galaxy S10+’s has a sheet of Gorilla Glass 6 on top of it.

All in all, the Galaxy S10+’s display is better, but not much better. Pretty much everyone would be more than happy with either of these two displays, and wouldn’t really mind having the Galaxy Note9’s panel instead of the Galaxy S10+’s.

We’re essentially looking at two of the best panels in the business.

The Samsung Galaxy S10+ is the company’s next-gen phone, and it comes with a brand new processor(s), the Snapdragon 855 in the US and China, while it is fueled by the Exynos 9820 in Europe and India. The Galaxy Note9, on the other hand, includes the previous-gen Snapdragon 845 and Exynos 8890, depending on where you buy.

The Galaxy Note9 is still a performance beast, despite the fact it sports a previous-gen CPU, though the Galaxy S10+ is a bit faster.

Android 9 Pie, along with Samsung’s One UI, only improved things on the Galaxy Note9, and the same experience is included out of the box on the Galaxy S10+.

Occasional stutters are present on the Galaxy Note9, but that’s not exactly surprising, and those stutters are so rare that the vast majority of people won’t care at all. The Galaxy S10+ does not really stutter at this point in time, so as of right now it offers the better performance. That’s probably not too surprising considering the more powerful hardware and the fact that the phone is newer.

Back when we reviewed the Galaxy Note9, the phone offered truly great battery life. That did not last long, though, as the phone’s battery life deteriorated, and within only a couple of months it was not nearly as good. Although Android 9 Pie did improve things a bit. On the flip side, the Galaxy S10+ does offer great battery life at the moment as well, which is not surprising as it ships with Android 9 Pie out of the box, and has a slightly greater battery capacity compared to the Galaxy Note9: 4,100 mAh vs 4,000 mAh.

It remains to be seen what its battery life will be like in half a year, but at the moment the Galaxy S10+ is for sure the better phone in this regard, and considerably better in this area than both the Galaxy S10e and S10.

The Samsung Galaxy Note9’s camera performance was among the best in 2018, the phone’s dual camera setup was able to provide some great shots with excellent dynamic range. The phone did well in both daylight and nighttime, as long as there’s at least some light in the scene. Something similar can be said for its video performance, it was one of the best out there.

The Galaxy S10+ did improve in this respect as not only did it add a new camera to the back, but it also improved in terms of processing.

The main sensor on the device remained unchanged and this in some ways limited how much Samsung could improve the Galaxy S10+’s camera. Video performance is also slightly better, but don’t expect to see a massive difference between the two phones.

The camera UI on both phones leaves a lot to be desired, as swiping through a bunch of modes is not exactly the best solution, and chances are it will irritate you if you’re changing modes frequently.

All in all, both of these phones offer really solid cameras. Even though the Galaxy S10+’s is better, it’s not a lot better, and that seems to be the theme of this comparison.

We did not get a chance to talk about audio until now, so it is worth noting that both phones include a 3.5mm headphone jack, and both offer stereo speakers. Audio provided by these two phones is great, and that goes for their speakers as well as when plugging in your headphones.

The Galaxy S10+ has a slight edge here as well due to the support for both AKG sound and Dolby Atmos audio, and you will hear the difference between the two phones.

Overall, both of these phones are quite compelling, and if you’re looking to save some money or really need the S Pen functionality, getting the Galaxy Note9 may be a good idea, but that’s only if you can get a great deal. In all other instances, getting the Galaxy S10+ is the better idea.

It’s simply better in pretty much every way. Not by much, but better is still better.