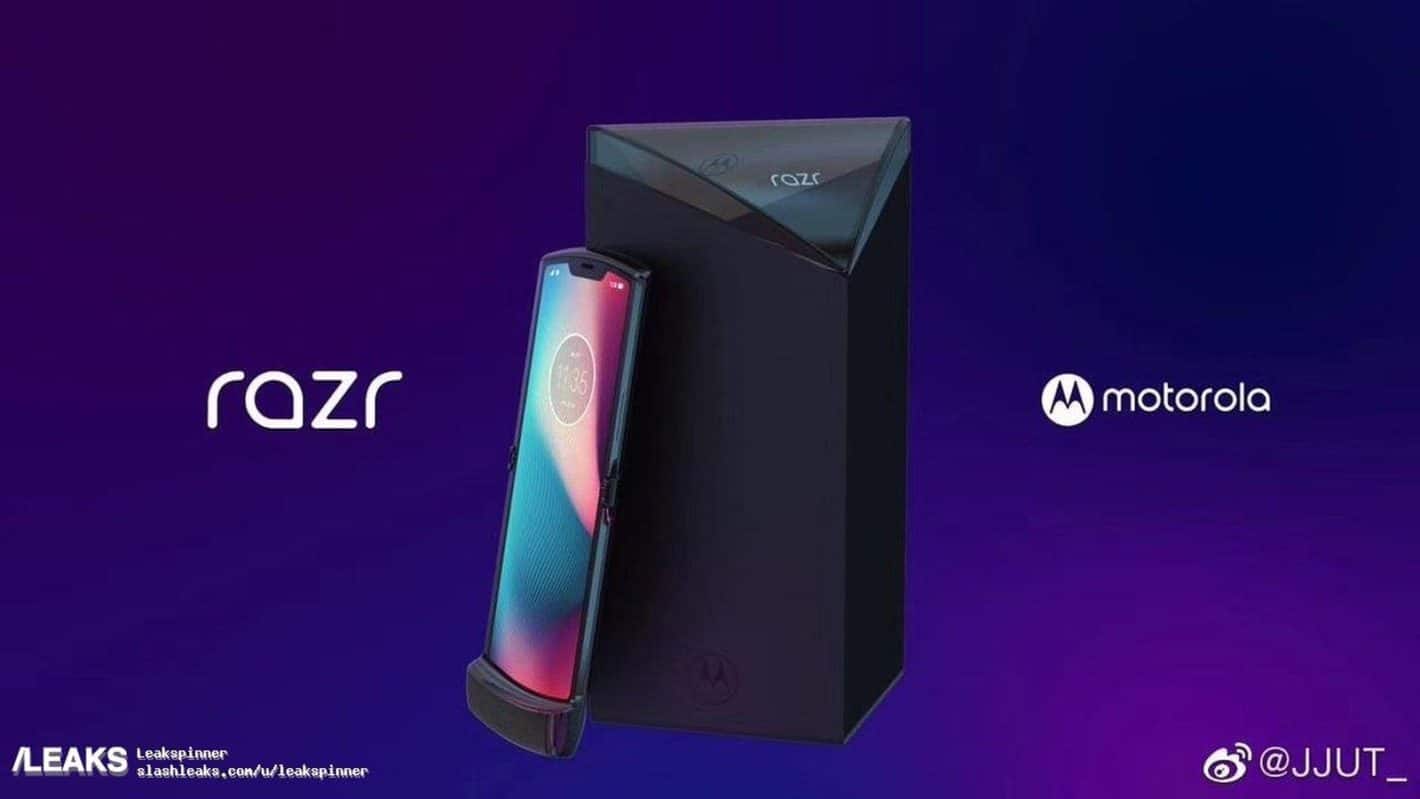 Motorola is expected to introduce its very first foldable smartphone in the near future, and that phone may have just surfaced in a couple of images. The phone appeared in three images on Weibo (Chinese social network). There is no way for us to confirm that this leak is legit, so take it with a grain of salt, as it is possible that this is a concept smartphone of some sort.

The device actually appeared with its retail packaging, and in-box content, not to mention that it resembles Motorola’s patented design which surfaced a while back. The phone is quite reminiscent of the original Motorola Razr cellphone which was announced a long time ago. That is not surprising at all, as Motorola already confirmed that the phone will carry the Razr branding, so the company will essentially revive that brand.

The phone comes with two displays, the main one folds in half, after which the bottom part of it sits nicely above the “chin” below the display. That chin protrudes quite a bit, as on the original Motorola Razr, it’s more of a design choice than a necessity, it seems. The phone’s main display does have a notch, which houses the phone’s earpiece, and quite possibly some additional sensors.

When folded, the phone’s secondary display becomes available, although that display is quite small, as on the original Motorola Razr. The device will be quite thin when folded, it seems, and you can get a glimpse of the phone’s hinge in one of the images down below.

As you can see, the alleged retail box of the device is quite odd, and it sits vertically, not horizontally. It has an odd shape and the “razr” branding on top. One of the images in the gallery also provides the contents of that box, as already mentioned, and it seems like one of the items is a wireless charging dock.

In addition to that, you will notice a regular charging brick, charging cable, USB Type-C to 3.5mm cable, some paperwork, and an additional cable. We’re presuming that the additional cable is actually for the charging dock.

We are still unsure when will the Motorola Razr become official, but Lenovo is expected to release it in the coming months. A report by XDA Developers actually suggested that the phone will ship with a mid-range processor, the Snapdragon 710, and not the Snapdragon 855 as originally expected.

Truth be said, it would be odd to see such a premium foldable smartphone to include a mid-range processor, but who knows, as it will certainly help the company keep the price tag down. On the other hand, the phone is rumored to cost around $1,500 when it arrives, and consumers will want to see a premium processor included on the inside for that amount of cash, even though the phone will be quite a bit more affordable than the Samsung Galaxy Fold and Huawei Mate X if it ends up costing $1,500.

All in all, we’re expecting to see more info regarding the Motorola Razr in the near future, and it’s up to you to decide whether you think these leaked images are legit or not.