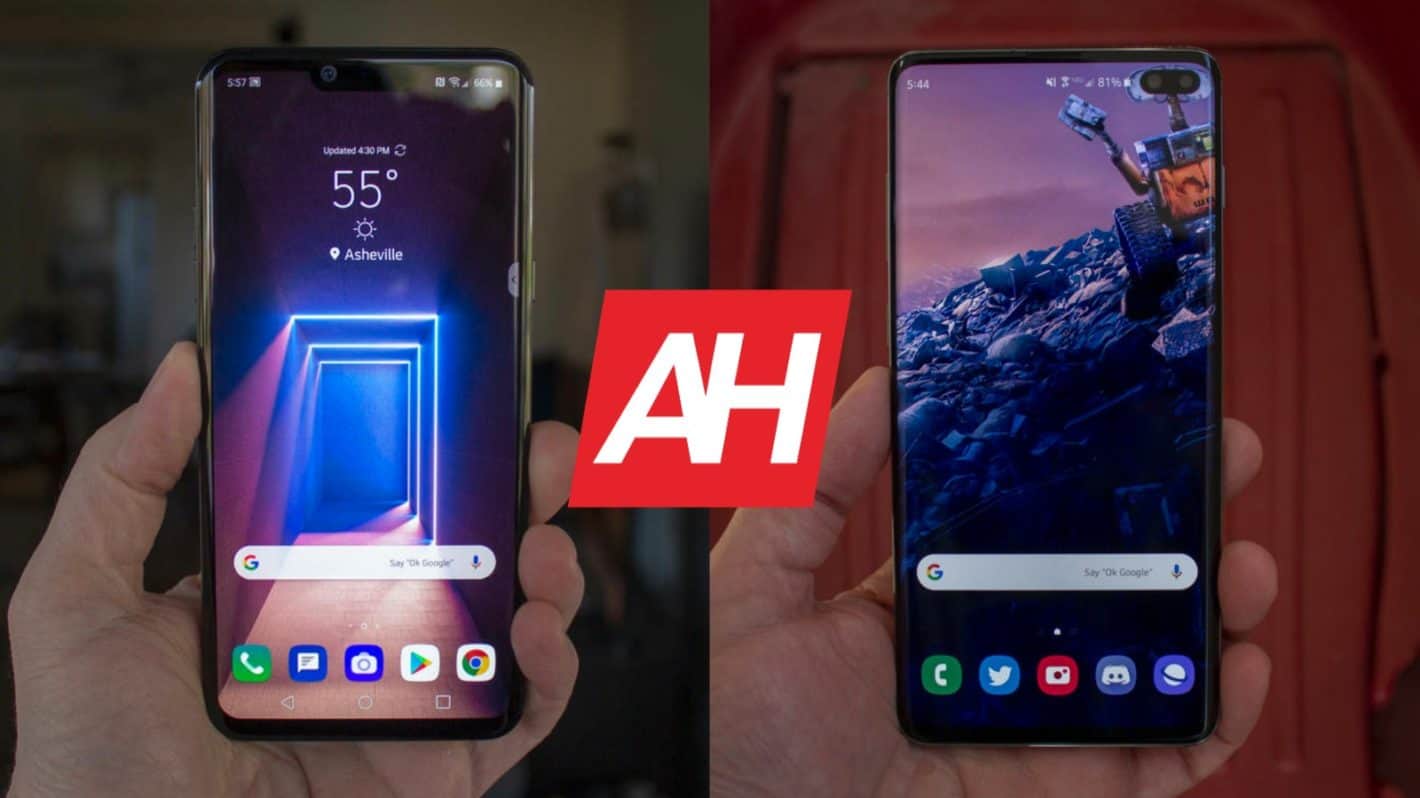 The LG G8 ThinQ and Samsung Galaxy S10+ are both brand new devices, and at the same time flagship offerings from their respective companies. Both phones had been announced back in February, and even though they have some things in common, they're mostly considerably different, which is why it's always a good idea to compare the two. Many of you are probably planning to purchase one of these two phones, and even though they are both made out of metal, and both sport OLED displays, they're for the most part different in both specifications and design, not to mention software, so read on if you'd like to know more.

Both of these phones are made out of metal and glass, while both feature curved back sides, and thin "chins". That's pretty much where design-related similarities end, though. The in-hand feel is somewhat similar, but due to the Galaxy S10+'s curved display, the in-hand feel and general usage of these two phones is different. The Galaxy S10+ is also a larger of the two phones, it's both taller and wider, so we'd say that the LG G8 ThinQ is easier to use with one hand, and in general, it's easier to use without a case. Do note that both phones are extremely slippery, though, so putting them in a case is definitely a good idea.

The LG G8 ThinQ comes with a display notch which is not exactly the smallest we've seen, but at least it's not extremely tall like the Pixel 3 XL's. The Galaxy S10+, on the other hand, opts for a different approach, as the phone has a pill-shaped display cutout for two of its front-facing cameras, and those cameras are located in the top-right corner of the device's display. The two phones also look considerably different on the back, as the LG G8 ThinQ includes two vertically-aligned cameras, a capacitive fingerprint scanner, and an LED flash back there. The Galaxy S10+ ships with three rear-facing cameras, a heart-rate sensor, an LED flash, and no fingerprint scanner on its back, its fingerprint scanner lies under the display.

In terms of the general looks, we prefer the Galaxy S10+, mainly because its camera cutout is noticeably smaller than the display notch the LG G8 ThinQ ships with. On the other hand, if you prefer a smaller phone, which is easier to use with one hand, and at the same time don't like curved displays for the same reason (or whatever other reason), the LG G8 ThinQ should be your choice.

In terms of general day-to-day usage and quality, both displays look amazing. You can always nitpick to see the differences, but the fact is, both displays are extremely sharp, you will not be able to see individual pixels or anything of the sort. Both displays get really bright when needed, while both offer those punchy AMOLED colors that most users prefer, though you have additional options included in both devices to tweak those displays to your preference. Viewing angles are also great on both devices, and we really don't have anything to complain about here. If you, for some reason, need HDR10+ support, then the Galaxy S10+ is the better options, if you prefer flat displays for media consumption purposes, as you don't really like the distortion provided by those curves (and occasional accidental touches), the LG G8 ThinQ is a better choice. Both of these displays are truly great, so you can't go wrong either way.

When it comes to performance, both of these phones are quite snappy, which is something you'd expect out of a brand new flagship, so that's not exactly a surprise. We did notice some stutters on the LG G8 ThinQ, mainly while scrolling lists, which is a bit odd, but that's probably just a tiny optimization that LG will make soon. Other than that, both phones are extremely snappy in every way, no matter if we're talking about opening applications, multitasking, or playing games, chances are everyone will be more than happy with the performance of these two phones.

Both devices are fueled by the Snapdragon 855 64-bit octa-core processor in the US, though the Galaxy S10+ comes with more RAM than the LG G8 ThinQ, 8GB / 12GB vs 6GB. Truth be said, you won't exactly feel that difference in day-to-day use, but it is something worth noting, definitely. Both phones have to push a similar number of pixels, and both phones come with Android overlays, from LG and Samsung, respectively. Samsung made some serious improvements with One UI, even though there are still some inconsistencies in the design, while LG did make some changes to LG UX 8.0, but it still doesn't look all that great… though it does perform great, so… it's all a matter of preference. The question is, how will these two phones perform after several months, or a year, but at the moment, they're both great in that regard.

The LG G8 ThinQ does have a smaller display, but it also comes with a considerably smaller battery. The LG G8 ThinQ includes a 3,500mAh battery, while the Galaxy S10+ ships with a 4,100mAh unit. Both devices offer rather good battery life, not the best out there, but more than enough for most users. When it comes to heavy use, though, the Galaxy S10+ does have an edge, at least in our testing, as we were able to get through a full day on heavy use without many issues, which was not the case with the LG G8 ThinQ, unfortunately.

Both the LG G8 ThinQ and Samsung Galaxy S10+ are really compelling camera smartphones, though they both have their drawbacks. The LG G8 ThinQ actually ships with three cameras in some markets, but the US model comes with two, which means that the telephoto sensor is missing, which is not the case with the Galaxy S10+. This is actually noticeable especially in low light conditions when you try to zoom in on a photo, as the Galaxy S10+ does better in such conditions.

The LG G8 ThinQ is a more compelling camera if you are looking for a selfie shooter, as the phone's ToF (Time of Flight) sensor on the front provides great bokeh for selfie shots, they really end up looking great as a result. Both phones can do really, really well in well-lit conditions, while the Galaxy S10+ has a slight advantage in low light conditions, not only when it comes to finer detail when zooming in, but in general. Camera UIs are not particularly great on these two phones, as accessing some modes does take longer than it should, and you may find yourself accidentally changing modes by a swipe. All in all, we'd give a slight advantage to the Galaxy S10+ here, though the LG G8 ThinQ is not far behind.

On top of everything we've mentioned, it is worth noting that both devices offer a 3.5mm headphone jack. The LG G8 ThinQ does not come with stereo speakers, unlike the Galaxy S10+, but its loudspeaker is quite good. As far as output through a 3.5mm headphone jack is concerned, the LG G8 ThinQ has the advantage here. The company included some proper DACs into its device yet again, and if you're picky as far as audio is concerned, the LG G8 ThinQ is the way to go. Both of these phones are quite compelling in their own right, and they're considerably different in many ways. Overall, we'd say that the Galaxy S10+ has the advantage, but we would not blame you if you'd disagree, or prefer the G8 ThinQ for a number of reasons.