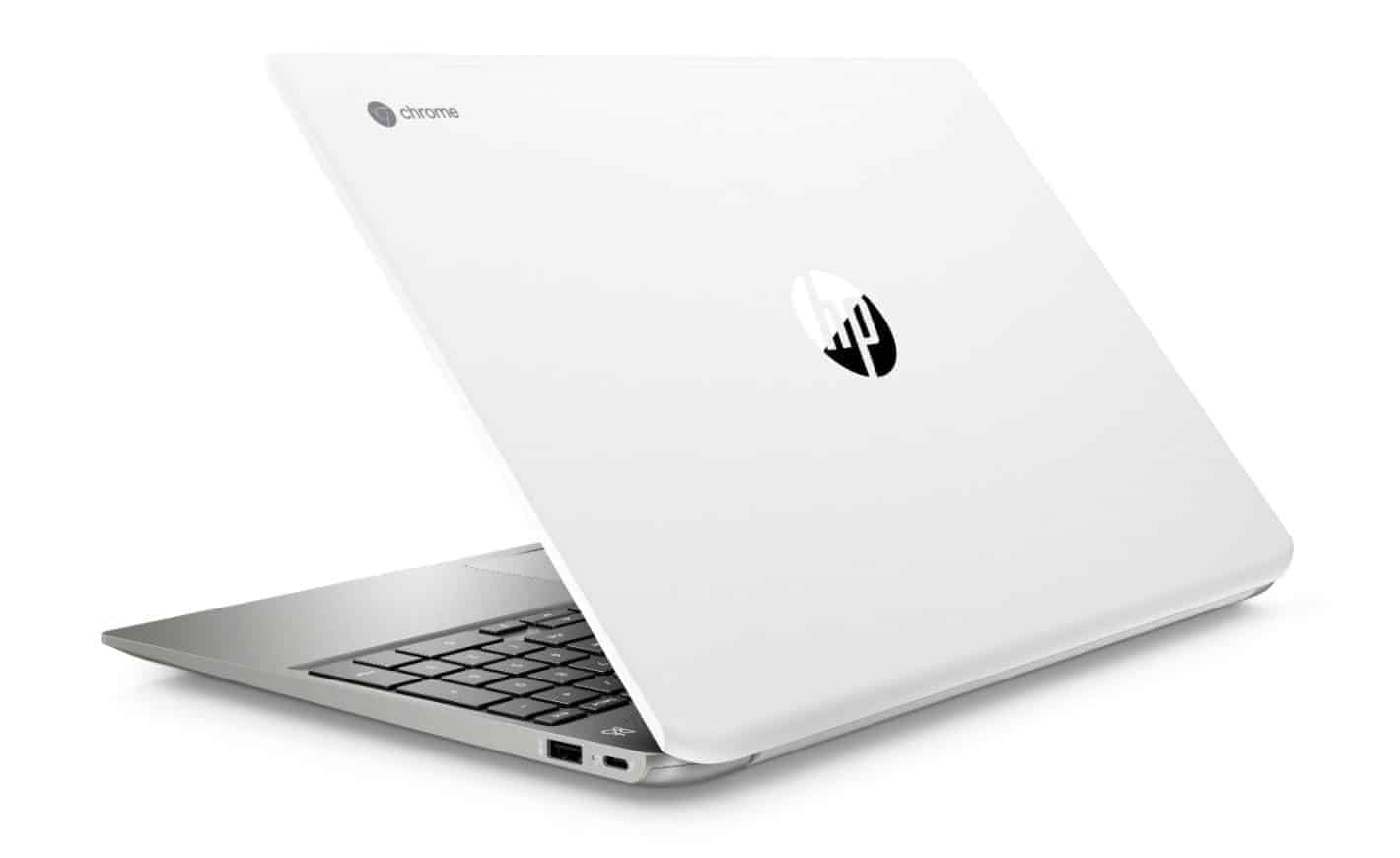 HP has a brand new Chromebook on the way that both embraces its recent past in that space and introduces a wider range of options for those looking to get started on the platform. The HP Chromebook 15, as its name implies, is a new series that takes a 15.6-inch clamshell format. Built around a design that has a familiar HP flair across several configurations that will suit a plethora of use cases starting at the upper-mid-range of the price spectrum.

Differences between the various models announced by HP are primarily in key internal specs so they're all going to be the same on the outside. The company's Chromebook 15 doesn't alter too much from recent Chrome OS laptops either. HP has chosen to stick with the inclusion of a sandblasted finish for its ceramic white lid with a darker color used for the keyboard base — in this case a 'mineral silver' or 'cloud blue' hue.

The display itself is set at a resolution of 1920 x 1080. That's an IPS BrightView WLED-backlit touchscreen panel with 'micro-edge' bezels allowing more screen real estate in a portable package weighing just under four pounds. The smooth swoop along the bottom of the backlit full-size island-style keyboard and multi-touch touchpad is accented by a pair of Bang & Olufsen speakers. The speakers are set just above the keyboard.

When HP says that's a full-size keyboard, that's also accounting for the fact that — with the introduction of the HP Chromebook 15 — the company is the second OEM to launch a Chromebook with a full number pad built into the keyboard. That should make these gadgets perfect for the business environment as well as for general use scenarios.

Ports embedded in the edges of that keyboard include a standard USB 3.1 port and two further 3.1 USB-C ports, each compatible with it's more efficient HP Sleep-and-Charge. The latter of those is also compatible with display output capabilities and data transfers at up to 5Gbps. A Kensington nano security slot is built into the frame too, for added security when the user environment calls for it.

The HD webcam placed above the FHD display features an 88-degree wide angle sensor with a two-mic array.

All of that is packed into an all-metal frame measuring just 0.7-inches thin for added durability and a truly premium feel.

HP hasn't provided all of the details on the specs of each variant of its latest device but that will all kick off with a gadget that brings a respectable 4GB DDR4 2133 SD RAM to the table. That should be plenty of memory to suit most purposes and it doesn't seem that will change expensive variants of this laptop. For holding files and work assets, buyers will start out with 64GB of eMMC storage.

Driving user's access to Google Play Store and Android apps along with Linux in its current beta format, HP is including an Intel Pentium Gold 4417U dual-core processor in the base model. That's an eighth-generation chip clocked at a 2.3GHz base frequency with a 2MB cache. Intel's HD Graphics 610 chip handles processing on the visual front.

Battery life will extend to up to 13-hours depending on the users' activity from the three-cell 60WHr power supply, charged via a 45W AC adapter included in the package.

On the opposite side, for those who need a bit more oomph from their laptop, HP is offering a variant packed with up to an eighth-gen Intel Core i5 processor coupled with as much as 128GB of SSD storage.

As noted above, this device should fit well among Chrome OS gadget ranging from the mid-range to the premium segment. At its upper reaches, the specs indicate that variations will be available to serve the needs of just about any user. For pricing, HP says that will start at just $449 for its Chromebook 15 and that's currently listed as "Coming Soon" on its website.

The company hasn't provided an exact date for its arrival or any details about where it will be made available.