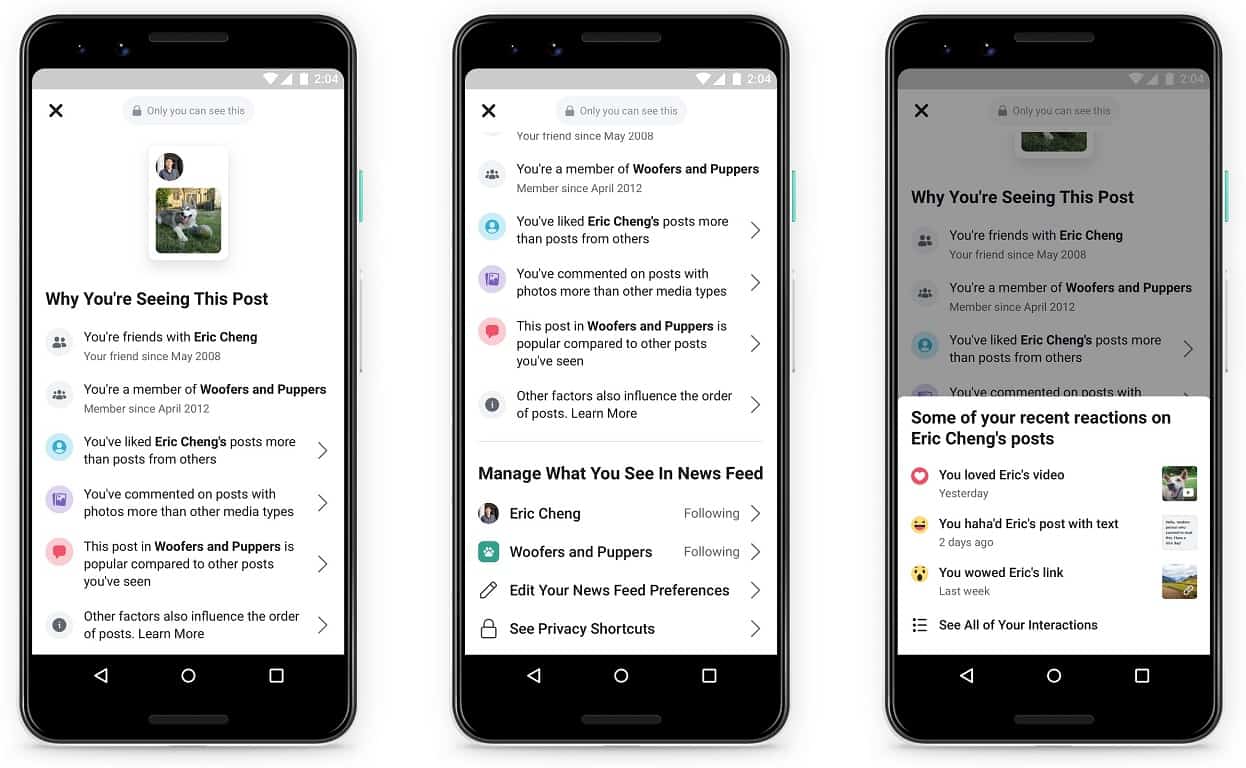 Social media giant Facebook released a new feature called “Why am I seeing this post?”. This functionality builds on a similar feature that the company released back in 2014 which explains to users why they are seeing certain advertisements on their news feed, and it attempts to describe how Facebook’s algorithms choose the content that people will see on their news feed by listing the information that the algorithms used in ranking posts.

Among the data that Facebook uses include the relationship between users, past interactions between people and with specific content types, the popularity of posts, and membership in Facebook groups. For example, if the user likes or reacts more often to content from a specific person, the latter’s posts will appear first on the user’s news feed. To access this feature, people may tap on the drop-down menu found at the upper right-hand corner of a post.

Aside from simply letting users know how it ranks posts on its platform, the social media giant is also making it easier to access features that let users control what they see on their news feed. While some of these features, like See First, Unfollow, News Feed Preferences, and Privacy Shortcuts, are already present for some time, users can now access these functionalities directly from the “Why am I seeing this post?” feature. For example, if people do not want to see content or posts from a certain user without unfriending them, they may choose to unfollow the person.

Meanwhile, an update to the “Why am I seeing this ad?” feature allows the functionality to show if the person’s email address or phone number matched the information in the list submitted by a specific business or if a company worked with a marketing partner in developing and running the advertisements. Despite its practice of matching email addresses and phone numbers, Facebook claims that it does not provide businesses with any information that could identify users.

Last year, Facebook revised its terms of service and data policy, which signals a shift to a more transparent social media platform. The altered data policy aimed to better explain what data the company collects, as well as why it stores the information. Facebook’s policy of transparency also applies to advertisements as well.

For example, the social media giant started labeling political advertisement shown on its platforms, which include Facebook and Instagram. The latest features that Facebook is rolling out to its platform is a continuation of the company’s efforts to be more transparent to its users, as well as allowing people to gain more control over their news feed.

It should be noted that these features may change over time, as Facebook gathers reactions and suggestions from its users that it could use to improve how it implements the functionality. Nonetheless, these features should help users gain a better understanding and context on why they see specific content on their news feed. Moreover, similar functionalities may appear in the future as the company gears towards a more privacy-focused service.