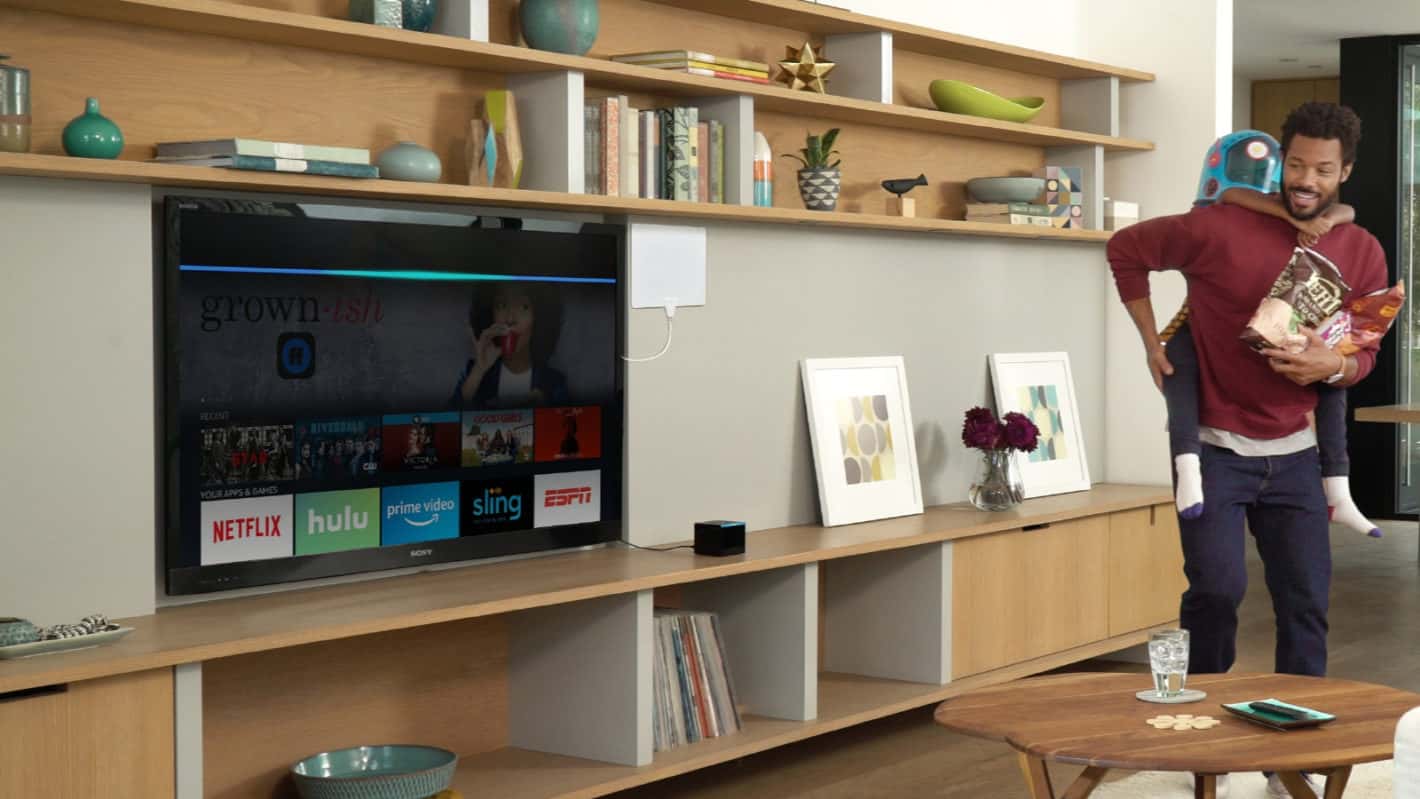 With so many streaming services available now, and more coming (like Disney+ later this year). Now is a great time to pick up a streaming stick or a streaming set-top box for your living room (or another room in your home). But there are so many options available, which is the best option for you? It is mostly going to depend on what services you use – or want to use.

We have rounded up the very best streaming sticks and set-top boxes that are available as of today. These range in price from as little as $30 all the way up to $200. So there’s definitely something here for everyone.

The NVIDIA SHIELD TV is hands-down, the best Android TV set-top box on the market. But it’s not cheap, coming in at $169. The SHIELD TV doubles as a steaming system and also as a gaming console. Allowing you to play your favorite Steam games on the big screen – in addition to your favorite Android games from the Play Store.

With the SHIELD TV, you have access to a ton of great apps for watching content. All of the big name apps are here, including Netflix, Hulu, YouTube, Google Play Movies & TV, Sling TV, YouTube TV, PlayStation VUE and many more. There is even support for Amazon Prime Video, which is the only Android TV device with Prime Video available. You can even watch the last season of Game of Thrones on the SHIELD TV with the HBO apps.

Unlike some other set-top boxes on this list, the SHIELD TV is actually still getting updates, and it is over two years old at this point. That alone makes this a very attractive option for a lot of people. Seeing as NVIDIA is not only updating the device, but still giving it new features.

You can pick up the NVIDIA SHIELD TV from Amazon using the link below. It is currently priced at $169 ($10 off its regular price). It also comes in a “Gaming Edition” which includes a remote controller for gaming, and then the “Smart Home Edition” which comes with the SmartThings Link.

If you’re into the Amazon ecosystem, then this is hands-down, the best Fire TV product you can buy, it’s also the most expensive, unsurprisingly.

The Fire TV Cube is essentially a Fire TV and an Echo merged into one device. So you’re getting always-listening Alexa included here, making your entertainment center all that much better. As you can use your voice to not only find something to watch, but to also control the TV. That includes turning it on and off with your voice. Which is pretty neat to be honest.

Fire TV Cube also has, well Fire TV built-in. So you have access to a ton of different apps and games on your TV. This includes Netflix, Amazon Prime Video, Hulu, Sling TV, DIRECTV NOW, PlayStation VUE and much more. Notably absent however, is Google’s own services, and that is due to the fact that those two aren’t playing well together, unfortunately for the user.

You can pick up the Amazon Fire TV Cube from Amazon for just $79.99, that is actually $50 off of its regular price right now, using the link below.

The Roku Streaming Stick+ is the best option if you want 4K, HDR, Google and Amazon content all in one device. And it does also fit pretty nice behind the TV. So if you do have your TV mounted on a way, it gives you a pretty clean look.

With 4K and HDR included in this streaming stick, you’re going to get a really good looking picture on your TV. That is of course, if your TV supports both. With more and more content coming out in 4K, it only makes sense to get something that has 4K support these days.

When it comes to content. Roku is by far the leader. It has over half a million movies and TV shows available for you to watch. With apps like YouTube, Google Play Movies & TV, Amazon Prime Video, Netflix, Hulu, ESPN+ and much more available on the platform. You’ll never be without something to watch on the big screen.

You can pick up the Roku Streaming Stick+ from Amazon for just $59.99. Now there is also a cheaper model that does not have 4K, only doing 1080p content and that goes for $49. But for the extra $10, it’s worth getting the Streaming Stick+ with 4K.

Amazon’s new Fire TV Stick 4K is also a good option if you’re looking for something minimal that can fit behind your TV. It’s also about $10 cheaper than Roku’s option above.

The Fire TV Stick 4K does have the Fire TV ecosystem behind it, so you’ve got a ton of great apps on-board like DIRECTV NOW, Amazon Prime Video, Netflix, HBO and much more. Allowing you to find plenty of content to watch on your TV. Additionally, you can get a ton of games on the Fire TV Stick.

With this sporting 4K and HDR, you will be getting a crystal clear picture on your new 4K TV, which is always a great thing to see. And considering you’re getting that in such a small package, it is pretty amazing to say the least.

You can pick up the Amazon Fire TV Stick 4K right now for just $39.99. It is normally priced at $49.99, but it is currently discounted for Easter.

Those that don’t want to pay the price for the NVIDIA SHIELD TV, but still want Android TV, the Xiaomi Mi Box S is the way to go. It’s a fraction of the price, and still has all the same great apps, as well as 4K and HDR. The biggest difference is gaming. The Mi Box S isn’t the greatest when it comes to gaming, especially compared to the SHIELD TV.

The Mi Box S is a pretty small set-top box, and it does have a ton of great apps available. Netflix, YouTube, Hulu, Google Play Movies & TV to name a few. Allowing you to really cut the cord and have a ton of great content to watch, over your WiFi connection. There is Google Assistant built-in, allowing you to use your voice to control the TV and what content is running too. With the Assistant, you can also ask what the weather is like, and it’ll display on the TV, which is nice.

You can pick up the Xiaomi Mi Box S from Walmart for just $59, and you will also get a $10 VUDU credit.

This is the most high-end streaming set-top box in Roku’s lineup, which is why it is about $88. That’s still cheaper than the most expensive Android TV or Fire TV product though.

The Roku Ultra has all the bells and whistles you could expect. That includes 4K and HDR support, allowing you to watch content the way it was intended to be. That’s similar to the Roku Streaming Stick+ that’s about $30 less, however since this is a larger set-top box, it has more computing power, allowing it to provide an even better picture than that streaming stick, while also staying pretty cool.

Tons of apps and games available on the Roku Ultra. Including Netflix, Hulu, YouTube, Google Play Movies & TV, Amazon Prime Video, just to name a few. There are over half a million TV shows and movies available on Roku. There are also some great games available for those that want to play games using the controller. The Roku Ultra now also comes with a pair of JBL headphones, which you can plug into the remote for some private TV watching, so you don’t bother those around you.

You can pick up the Roku Ultra from Amazon right now for just $87.99, that is down from its $99.99 regular price, from the link down below.

Right now, there are sadly only three platforms (well four if you include Apple TV) for streaming set-top boxes. And if you want both Amazon and Google’s content, you only have one choice, which is Roku. The fact that those two behemoths can’t get along, is really hurting the consumer. But Roku does offer some really good streaming products, and the fact that you get Amazon Alexa and Google Assistant built-in, really makes it a great choice for just about anyone out there.

Those that do some casual gaming, but don’t want to spend hundreds on a PlayStation 4, the NVIDIA SHIELD TV is the best option for them. Not only can you watch the latest Netflix Originals on the SHIELD TV, but you can also play Steam games thanks to the GeFORCE NOW integration. And that definitely looks better on a TV than a smaller monitor. Though if you are invested in the Amazon ecosystem with Alexa and other Amazon products, then the Fire TV Stick 4K or Fire TV Cube are going to be great options. The best option for you is going to depend on what you need from your streaming device and what services you use.