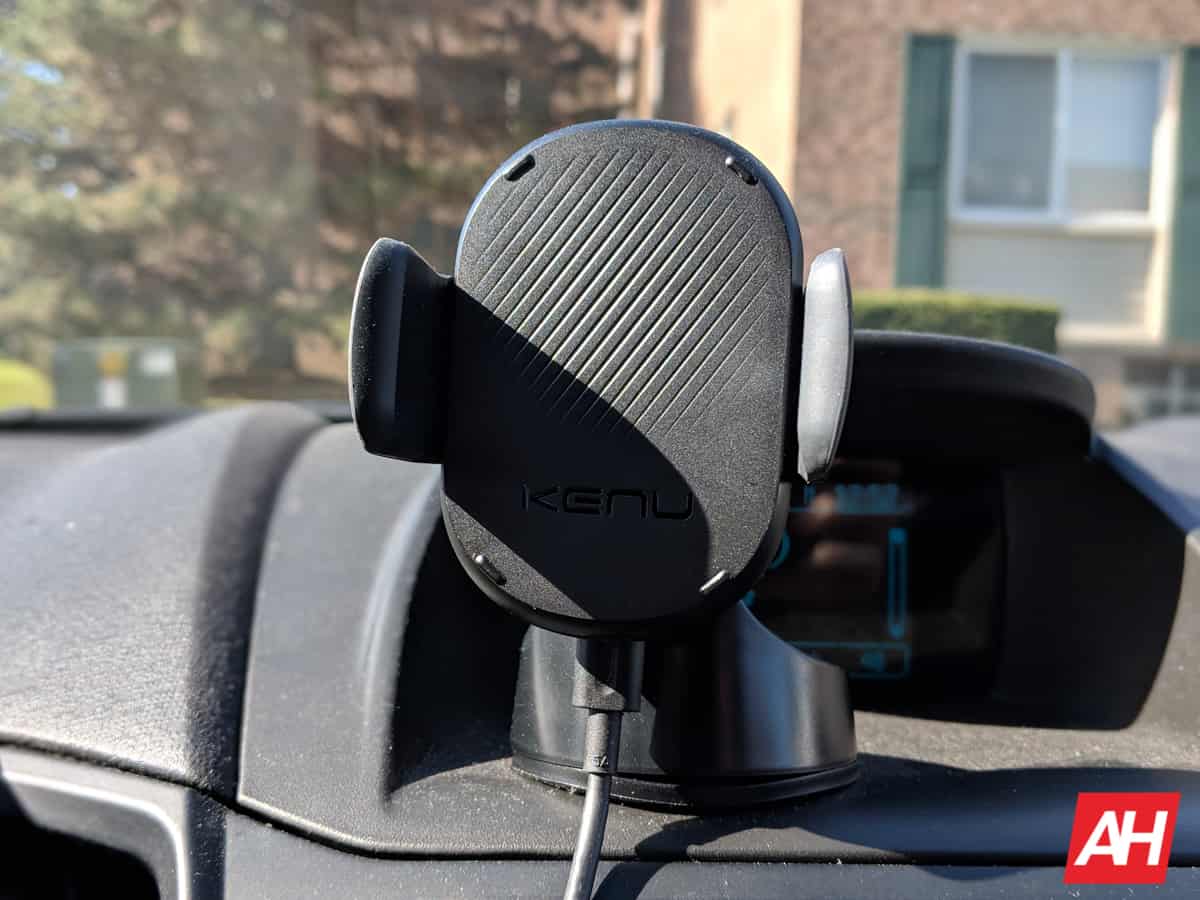 Car mounts come in all sorts of different varieties, so there are hundreds of different car mounts out there. But which ones are the best? We’ve rounded up the best car mounts available for the LG G8 ThinQ, and here they are.

This mount from Maxboost is a magnetic mount, making it great for those that want something minimal in their vehicle. It attaches to the air vent in your car, so that it is out of your line of sight through the windshield, but still where you can see it and use it for navigation.

Maxboost offers this in a two-pack, so you could get one for your car and another for your significant other’s car, and it’s still pretty cheap. Making it a good option for a lot of people.

This does use magnets to keep your phone in place, so you can put a magnet inside your phone’s case to mount it on your air vent. Don’t worry though, as it will not damage your phone at all. Just don’t affix the magnet to your phone, or it’ll never come off without damaging the phone. Slide it inside your case and you’re good to go – and you’ll never even see the magnet!

You can pick up this two pack of Maxboost Air Vent Car Mounts from Amazon using the link below, it is currently priced at $7.90.

If you really want something that is minimalistic, then the VAVA Magnetic Phone Holder is also a good option. This is going to be a great option. It’s very small, and magnetic, so you can just slap your phone on the mount and be good to go. You can articulate the mount to point in the way you wish, so that you can actually see it while you’re driving and such.

This car mount is a good option for those vehicles that have a lower dashboard, where an Air Vent mount might be too low, but don’t want a huge dashboard mount. It’s a good looking mount, that won’t get in the way when it is not being used.

You can pick up the VAVA Magnetic Phone Holder from Amazon for just $18.99 using the link below.

The Spigen Kuel S40-2 Turbulence Car Mount is a minimalist car mount for those that don’t want to use magnets. This is a car mount that folds down when it is not in use. Just open it up and stick your phone in the mount, in landscape mode and you are good to go. It’s a good option, because it is fairly small when it is not in use, so that it is not blocking your view of the road all that much.

Spigen offers the Kuel S40-2 Turbulence car mount in a few colors. There is the black, iridum silver, lunar blue, ruby red and steel gray. This car mount is available for $17.99, and you can pick it up from Amazon using the link down below.

This is one of the best selling car mounts on Amazon right now, and it’s not hard to see why. It’s a fairly minimal car mount, that uses magnets to keep your phone in place. Even when it is not being used, it doesn’t add any distractions to you while you are driving, and that’s always a good thing.

AUKEY includes two magnets with this car mount, so you and your significant other can have a magnet in your phone’s case to use this car mount. Which makes things pretty simple. This is a magnetic mount too, so there’s no adjustable arms on this one, like some of the others on this list. And the magnet will not damage your phone. Just slide it inside your case loosely, so that it is not actually attached to your phone or the case. Making it much simpler to remove it later on.

This is also one of the cheaper air vents on this list, coming in at just $7.99, which is likely why it is so popular on Amazon. You can pick up the AUKEY Air Vent Magnetic Phone Mount from Amazon using the link below.

The iOttie Easy One Touch 2 is a really good option for those that don’t want to use magnets to hold their phone in place (for any reason). This one uses a suction cup to attach to your dashboard and then has an arm that is adjustable, so depending on your dashboard, it can come closer to you. Allowing you to actually see the display.

It’s a really good looking car mount, but it’s one of those that can’t really be hidden when you are driving, so unfortunately you might want to take it off the dashboard when you aren’t using it. Since you likely don’t need to use navigation every time you jump into the car these days.

This car mount from iOttie is available from Amazon, and you can pick it up using the link down below. It is priced at $16.95, making it one of more the more expensive models on this list, but definitely worth it.

The Squish car mount is a bit different than the others on this list. This one is a wireless charging car mount, which is going to offer up the ability to charge your LG G8 ThinQ while you are driving, and not end up at your destination with a dead battery.

Since this one uses wireless charging, it does not use magnets to hold your phone in place. Instead, it has adjustable arms on the side to hold your phone in place, and it also has a “shelf” at the bottom to keep it from sliding out. Which is a really good feature to have. As the last thing you want to happen is, you hit a pothole and the phone slides out of the car mount and hits the floor. Definitely not something people will like, and most would stop using that car mount.

This car mount can be picked up from Amazon using the link below. It’s a bit more expensive, since it does include power, and it comes in at a price of $27.95.

iOttie is back on this list, and it’s for the wireless car charger that it is selling. This is a fast wireless charger, and while the LG G8 ThinQ doesn’t support fast wireless charging, it is still backwards compatible, so that it will still charge your G8 ThinQ safely.

Having wireless charging in a car mount is pretty cool, as you can just put your phone in the mount and use it for navigation, and when you get to your destination, you have a fully charged device. Or at least more juice than when you had left home.

This is also a dashboard car mount from iOttie, and it uses a suction cup to stay attached to the dashboard. It also uses adjustable arms to keep the phone in place, with a shelf at the bottom to keep it in the mount, even if you hit a bump. So there’s no magnets here, which wouldn’t be a good idea on a wireless charging car mount anyways.

You can pick up the iOttie Easy One Touch Qi Wireless Fast Charge Car Mount from Amazon for a whopping $49.95. It’s expensive, but that is because it does wireless charging.

With phones like the LG G8 ThinQ, having a wireless charging car mount is a life saver, for a number of reasons. Firstly, because it is able to charge your phone while navigating. So you can just put your phone in the mount and not worry about plugging it in at all, which is definitely a nice feature to have. Though, it is unfortunate that LG has not embraced faster wireless charging just yet. So you’re going to be stuck with the slower 5W wireless charging instead of the faster 10W wireless charging.

All of the car mounts on this list are really great options. Whether you want something minimal, something that can wirelessly charge your phone, or even something that is able to hold your phone in place without using magnets. There’s something here for everyone. And each one of these will work perfectly fine with the LG G8 ThinQ, which is a great thing.