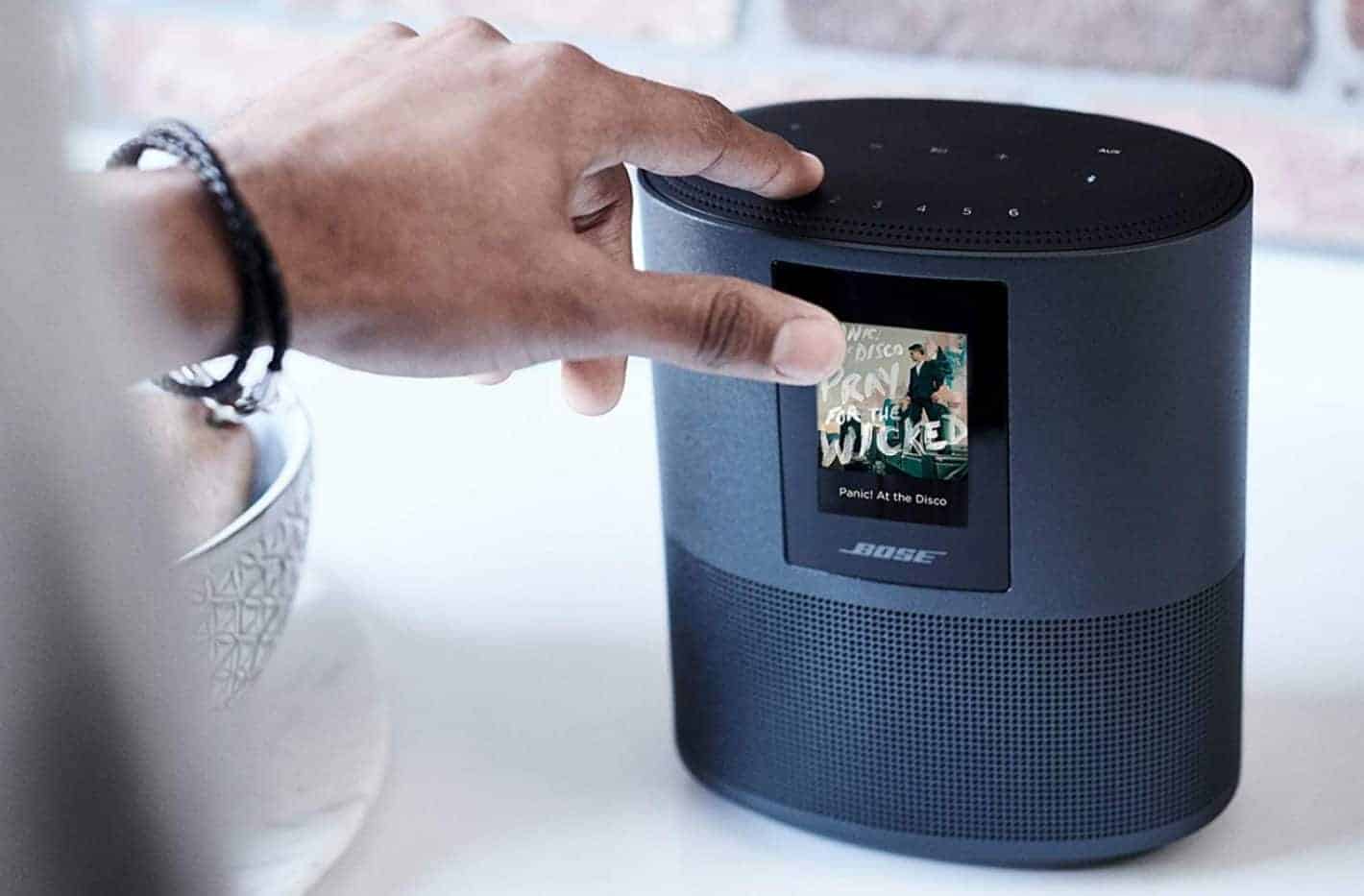 Amazon Alexa is baked into a ton of different speakers these days. While Amazon offers a slew of different Echo’s that have Alexa built-in, a number of third parties also have Alexa-enabled speakers. So when you’re looking for an Alexa speaker to add to your home, which is the best one to pick up? Well, we’ve rounded up the very best Alexa-enabled speakers that are currently available.

While there are other Alexa-enabled smart speakers available that are cheaper, they aren’t as good as the Echo Dot. The Echo Dot is a small “hockey puck” sized smart speaker that is covered in fabric, giving it a nice look and also making that audio quality sound even better.

The Echo Dot doesn’t have the best sounding audio, but it is pretty decent for its size. This is due to the fact that Amazon worked with Dolby to tune the audio quality in the Echo Dot. Getting the most out of its small size. However, if you don’t like the audio quality, you can connect it to another speaker either wired or over Bluetooth – wired would be the better option, less lag involved there.

Amazon’s Echo Dot comes in a few different colors, including charcoal, heather gray and sandstone. There’s not a whole lot to this smart speaker. It plays music, has Amazon Alexa built-in, and works flawlessly. It’s great to put into a bedroom, or a kitchen, allowing you to bring Amazon Alexa into every room of your home.

The Amazon Echo Dot (3rd generation) is typically priced at $49.99, however right now it is just $39.99. You can pick it up from Amazon using the link below.

Most smart speakers are not portable, mainly because the digital voice assistant to be always listening means terrible battery life. So many manufacturers don’t think it’s worth the trade-offs. But there are a couple of portable Amazon Alexa speakers out there, including the Harman Kardon Allure Portable, which we believe is the best option due to its sound quality, and unique design.

The Allure Portable is the smaller (and more portable) version of its big brother, the Allure. It does still have that blue LED at the top, which gives it a rather unique look. The top part is clear, allowing you to see the blue LED that does light up when Alexa is listening, and is also used to indicate the volume on the speaker.

Audio quality on the Allure Portable is decent, but it is not better than the regular Allure, or even the Bose Home Speaker 500. The reason for this is because it is smaller, and needed room to fit a battery. So it can output about 20W of sound, versus the 60W that the Allure can put out. It does still have some pretty insane bass, as well as crystal clear mids and highs. Allowing for some great sounding audio coming out of this speaker. despite missing a woofer, the bass is still pretty powerful.

If you’re looking for an Alexa speaker that is going to give you some incredible sounding audio, then the Sonos One is the option.

The Sonos One has Amazon Alexa included – and soon, Google Assistant. It also works with Sonos’ own multi-room audio system. Allowing you to group this with other Sonos speakers in your home to play music and so forth. It’s a really great speaker to have, in that regard. Since you can do that all through Alexa with your voice.

When it comes to audio quality, the Sonos One is a pretty good option, since it does have some pretty incredible bass, especially for its size. It will get pretty loud, all without distorting the audio, which is always a good thing.

You can pick up the Sonos One from Amazon using the link below, it’s currently priced at $179.

The Amazon Echo Plus second generation is likely the best Alexa speaker you can buy, if you are looking to get started in the smart home space. This is because the Echo Plus does double as a smart home hub. And Amazon does routinely discount it with a free Philips Hue Smart Bulb and other products that would normally need its own hub.

The Echo Plus is a slightly taller speaker from Amazon, so you’re going to get some better sounding audio than you would from the Echo or Echo Dot – big surprise there. Amazon has also worked with Dolby to tune the audio on the Echo Plus, so not only is the bass and treble pretty strong, but it is also really good sounding thanks to Dolby.

Amazon offers the Echo Plus in a variety of colors, including charcoal, heather gray and sandstone. From time to time, it will also offer some limited edition wood versions. You can pick up the Echo Plus from Amazon using the link below, where it is currently priced at $149.99.

If you care about audio quality, then the options from Bose and Sonos will be at the top of your list. But what sets Bose away from Sonos is the larger speaker and the built-in display.

With the small screen in the middle of the Bose Home Speaker 500, you can see album art for the music that is currently playing. The screen also works as a clock, so you could theoretically put this on a table next to your bed if you wish. It adds a bit of character and uniqueness to the Bose Home Speaker 500, which is needed in the world of smart speakers these days.

The Bose Home Speaker 500 also sports some rather impressive audio quality. You’re getting stereo sound out of this speaker, as well as 360-degree audio. This means that you can place it on a table and it will fill the entire room with sound, rather easily. Which is good to see, especially considering Bose is known for its great audio quality on its products.

Users can play music through Alexa on the Bose Home Speaker 500, but they can also use the new Bose app – available for iOS and Android – to play music from different streaming services. The only downside to the Bose Home Speaker 500 is the fact that you cannot play audiobooks from Audible. That appears to be a feature that Amazon is keeping for its first-party, Echo devices.

The Bose Home Speaker 500 is not cheap, coming in at $399, it’s actually twice the price of the Sonos One, but it is a much better product and surely worth that price. You can pick up the smart speaker from Amazon using the link below.

Sometimes, you don’t even need to buy a new speaker, to get an Amazon Alexa-enabled speaker. The Echo Input is just that, it’s an input that will make your existing speakers around your home, smart and have Alexa built-in. This is great for those that are really picky about their speakers and only want the best, but also want some Alexa in their life. And the best part, is the fact that this costs less than an Echo Dot!

The Echo Input plugs into the back of any speaker, and it also has buttons for turning off Alexa’s always-listening behavior. It is a very simple setup, and the fact that it works on virtually any speaker out there, is a pretty big deal. You’ll still be able to Ask Alexa things like how the weather is today, how’s traffic, what’s in the news and so forth.

With the Echo Input costing just $19.99 right now, it’s definitely a much better purchase than an Echo Dot, which is twice the price. You can pick up the Echo Input from Amazon using the link below.

When it comes to speakers that have Amazon Alexa baked in, there has never been as many choices as you have today. Most speaker companies are even working on their own Alexa-enabled speakers, because they realize that it (and Google Assistant) are the future for speakers. Being able to play music using your voice is a great thing. But it also works for controlling your smart home and even finding out what’s going on in the world with the latest news headlines.

By far the best sounding Alexa speakers on this list include the Sonos One and Bose Home Speaker 500. While Bose’ option may not look as nice as some of the others on this list, that built-in display is definitely a nice feature to have. Especially since it will show you the time and such, and work really well next to your bed. As you can ask Alexa to set an alarm and even play some music to get you to sleep.