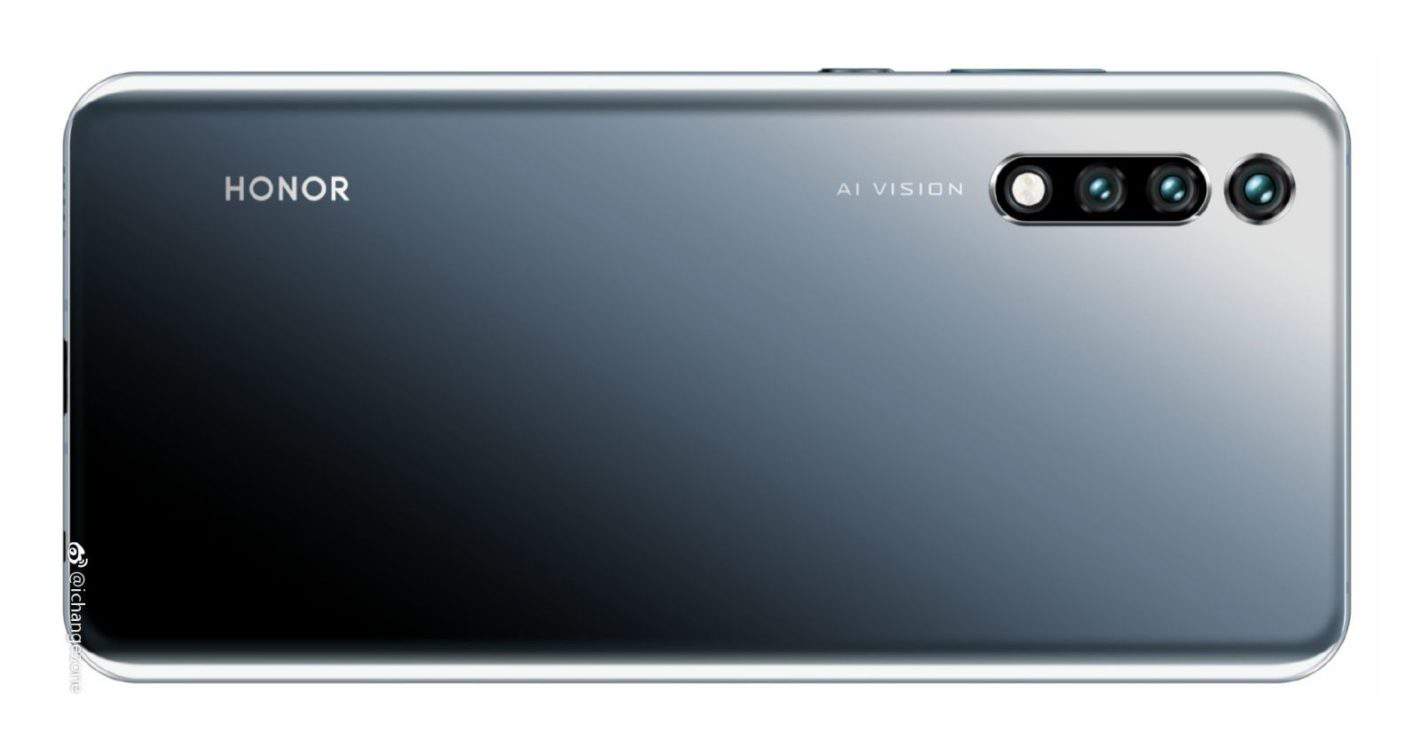 Huawei's sub-brand Honor is seemingly preparing to release an upgraded version of the View 20 launched last December in China. A render depicting the alleged device along with a list of specifications leaked on Chinese social network Weibo earlier today, and much like the Honor View 20, the updated model carries the "AI Vision" branding on the back panel, hinting at the inclusion of a Time-of-Flight camera.

In terms of design, the unannounced model has a vertically aligned camera array, unlike the View 20's sensors which are aligned horizontally. The new model also lacks a rear-mounted fingerprint sensor, but it's unclear whether this is because it embeds the sensor in a side-mounted physical button or features an in-display module.

Spec-wise the upgraded Honor View 20 is said to feature a 48MP camera coupled with a 20MP and 8MP sensor. The AI Vision branding hints that the device will take advantage of ToF capabilities and the preliminary list of specs mentions a 32MP front-facing sensor and a HiSilicon Kirin 980 chipset.

The display measures 6.1-inches, down from the View 20's 6.4-inch panel, and it is now based on OLED technology instead of IPS LCD, which might further indicate that the device could adopt an in-display fingerprint sensor. Other features seem to include a USB Type-C connector and a 3,650mAh battery, along with some gaming-oriented software features.

The same source claims that the upgraded Honor View 20 will be released in three main variants, two of which will have 128GB of built-in storage along with 6GB or 8GB of RAM. The third model will sport 8GB of RAM and 256GB of storage.

In a way, this mysterious Honor View 20 update looks somewhat similar to the upcoming Huawei P30 and P30 Pro, except Honor's model accommodates the three rear-facing sensors in two separate housings as opposed to sharing the same back panel cutout. Additionally, the View 20 doesn't have Huawei's Leica branding as it does its own thing with AI Vision.

There are no images showing the front of the device, so it's unclear whether it will have a punch-hole camera cutout for the front-facing sensor like the ongoing View 20, or adopt a centered drop-like display notch similar to what's expected from the Huawei P30 series.

Assuming that all of these leaks are correct, it remains to be seen when the upgraded Honor View 20 will be introduced. Normally it would seem odd for an OEM to launch a new flagship two months after the most recent model made its debut, but then again the Honor View 20 introduced in December was preceded by the Honor Magic 2 in November, and both models were powered by the Kirin 980 chipset and 6GB or 8GB of RAM, along with three rear-facing cameras.

The Honor Magic 2 has an in-display fingerprint sensor, so in essence, it looks like the upcoming Honor View 20 might be a combination between the Magic 2 and the original View 20 released late last year.